I was forming opinions about Anthem, EA's jetpacks-and-loot Destinylike, when they said that they’re dropping a big ‘day one’ update before the 22nd that supposedly changes and/or fixes a load of things. It’s downloading as I write this, making it technically a day one minus two patch, but it still bloody well say day one patch in the notes. I’m sure Origin Premier users feel catered to.

Calling this a day one update is a bit of a cheat. A sleight of hand so you won’t see that, tucked back up his sleeve, the magician is hiding a game that’s been out for a week already. If you didn’t know, you can pay EA £15 a month to get 'Premier' access on Origin, which grants you access to some games for free and some bonus content in their new games. And, in this case, you got Anthem a week earlier than the scum who don’t subscribe. This was not sold as early access. This was supposed to have been the finished article. So while I’m going to review the game with the patch included, I don’t want to let the state of the game for Premier users, who I would expect to be EA’s most valued customers, go unremarked upon by, well, me. 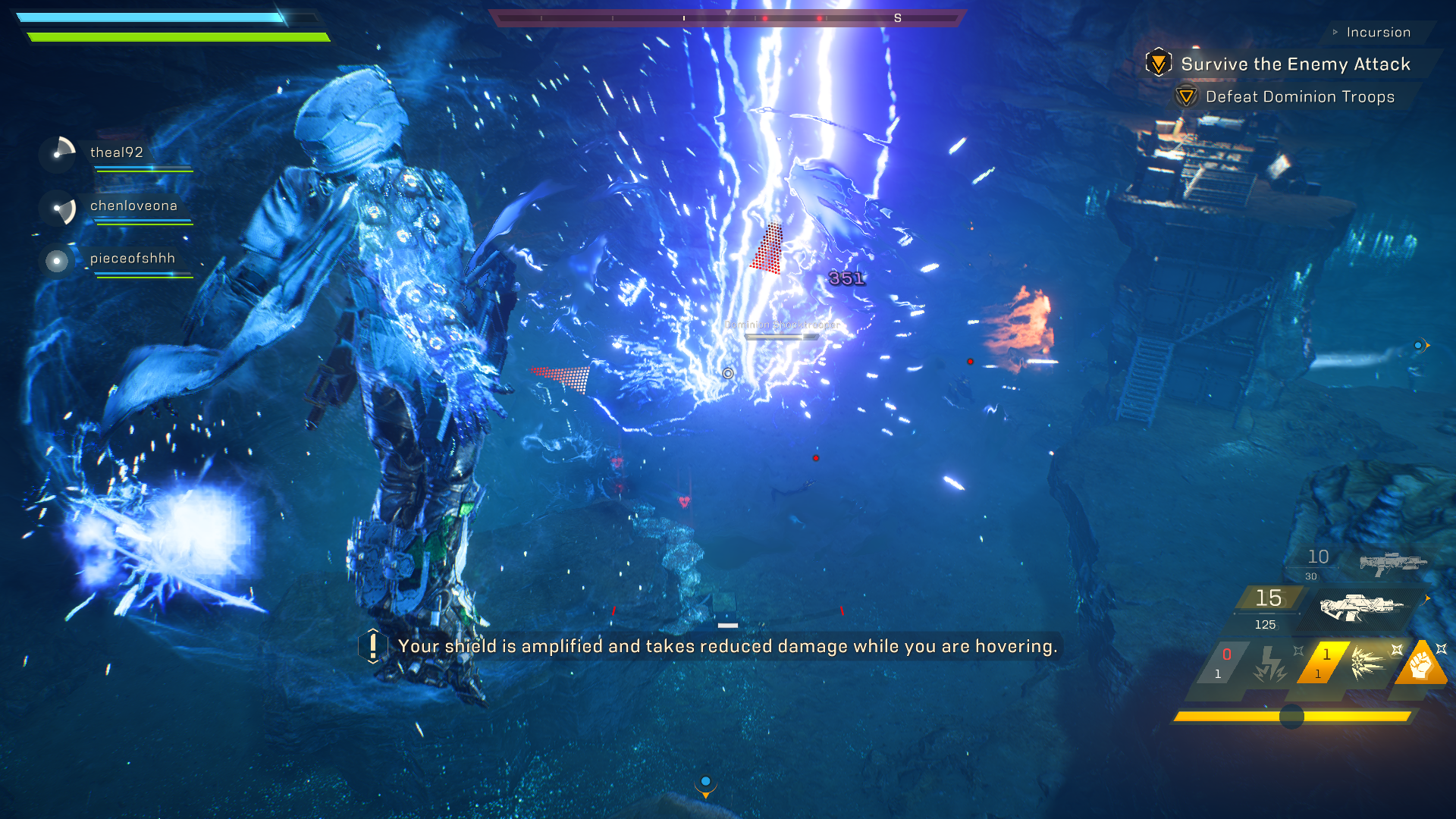 It’s not been all bad. For the first day or so I was really, really enjoying the Storm javelin. As you level up you can, eventually, unlock all the different rocket propelled mech suits in the game. They actually all have things to enjoy about them, and handle very differently: the Colossus is a big thumpy space marine; the interceptor is fast and acrobatic (and has the perkiest arse). But to start with you only have one. And literally? Why? Would you not pick the Storm javelin? It is like being Storm off of the X-Men, but also a robot.

I’m not one to get very involved in talking about ‘gun feel’ (a term which sounds so euphemistic you might as well be saying ‘honking yr pud’), but the thing is that firing any weapon in Anthem feels very much like firing any other weapon. A rifle makes one big number float off an enemy; a shotgun makes lots of little ones, like sad doves of pain being released weightlessly into the air at the world’s most boring wedding.

If you have a Storm javelin, this problem is neatly circumvented by being able to blast lightning from your arms like a cyberpunk Zeus. Or if you prefer, ice or fire. In the case of your ultimate attack it’s all three. My Colossus (Chonker The Squirrel) is a satisfying, beefy boy, but at the end of the day he can’t freeze anyone solid. Neither can he hover around the battlefield in an orb energy shield like Magneto at his most genocidal. 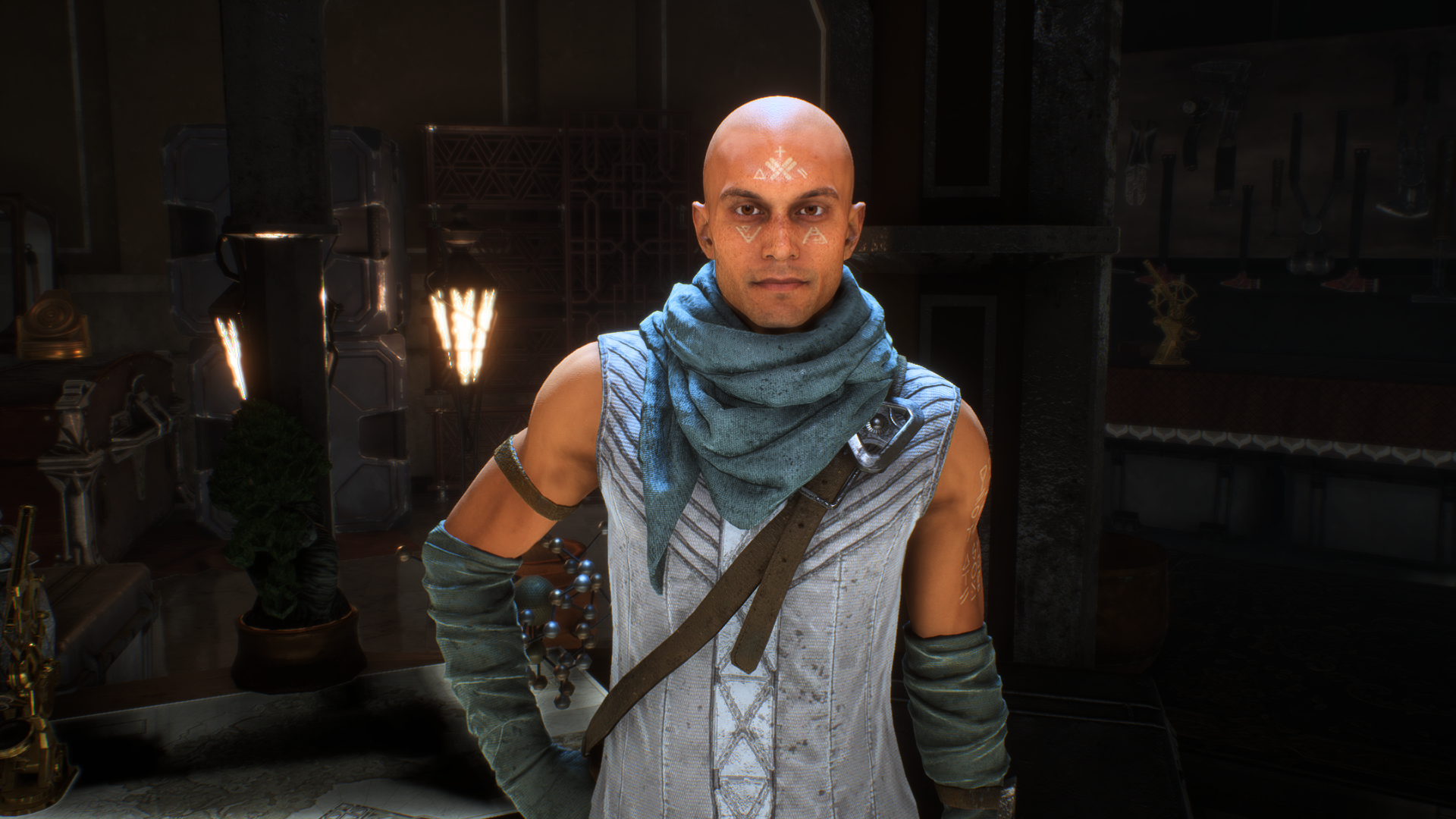 But for the past week it has been frustratingly hard to actually enjoy zipping about in your javelin. The game has been wildly unstable for me -- far more so than Mass Effect Andromeda, but the character models are prettier so no one will make it into a meme. (They are so pretty that there is an alternate version of this article called [Why Can't I?] Screw Everything). I’ve averaged one to three game breaking bugs a day, including the known issue of, um, all the sound in the game going off, the known issue of some key story missions just not noticing that you’ve finished them, and the known issue of getting stuck on loading screens.

Anthem's load times are, according to my notes, currently at ‘KILL ME NOW’ lengths, so when then game stuck mid-load it took me a while to realise it had, because I got into the habit of doing Sudoku while I waited for a mission to start. You also don’t spawn on your squad when a mission does begin; you launch at the start of the area and, if the others are ahead of you, you get about 25 seconds to catch up or you’ll get another load screen while you, er, spawn on your squad. This week this timer has been extremely snippy at me, like a teacher on a school trip. I have been told to catch up with my mates even when I can already see them getting in a fight.

Sometimes I found that, for some reason, connecting to the Anthem servers eats roughly 40 mbps of my bandwidth. I’ve had a lot of disconnect problems (as has Hardware Kween Katharine), and roughly once a day I’ve encountered truly spectacular lag that enjoys firing me into walls.

Fort Tarsis is lovely, but sometimes its entire architecture disappears, so I am unable to reach my javelin and stand trapped as if in a hole in the ground underneath it. 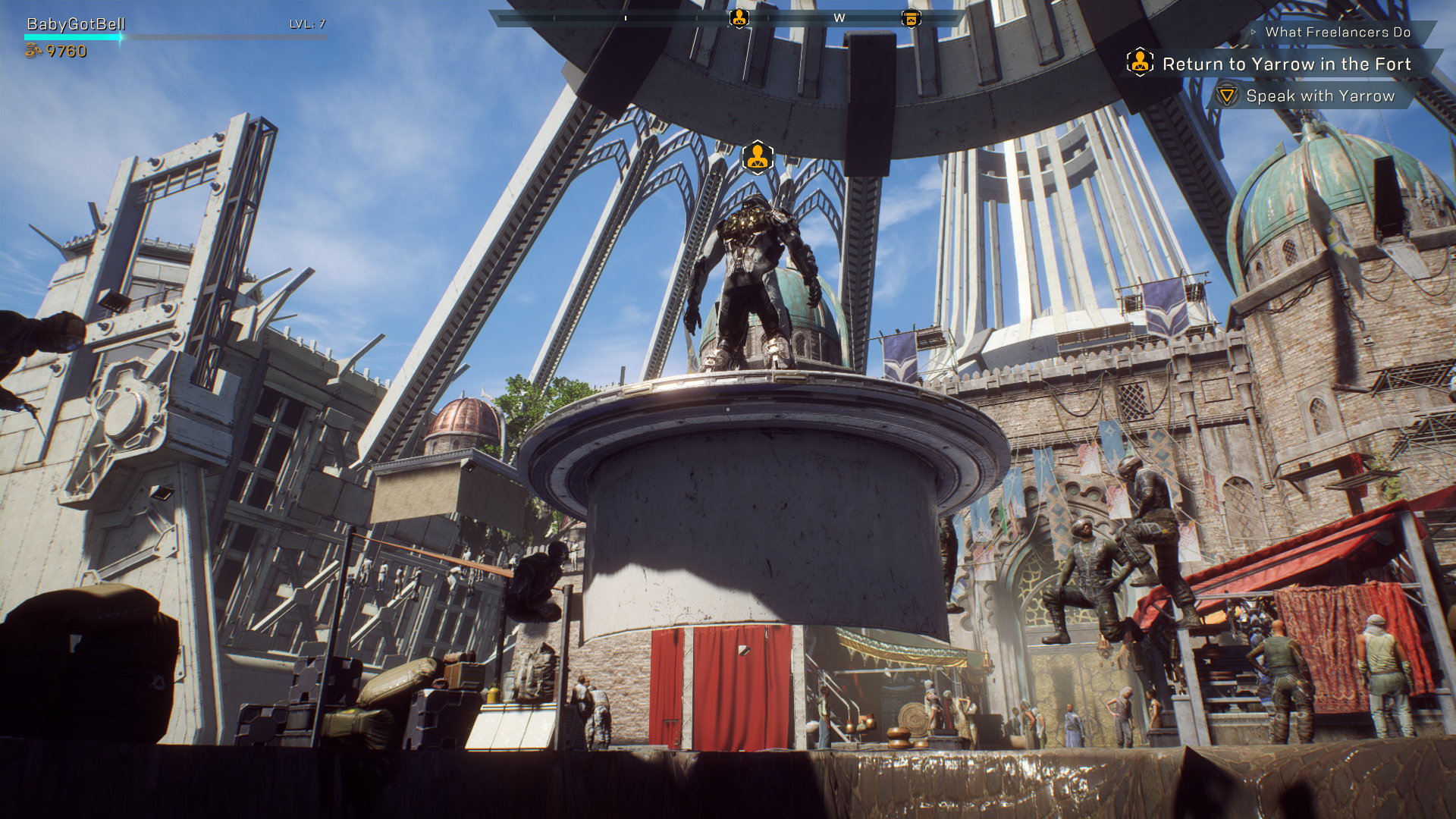 This happened in a cutscene the other day. I think that's my player character? I'm not sure because you never see them not in a suit. 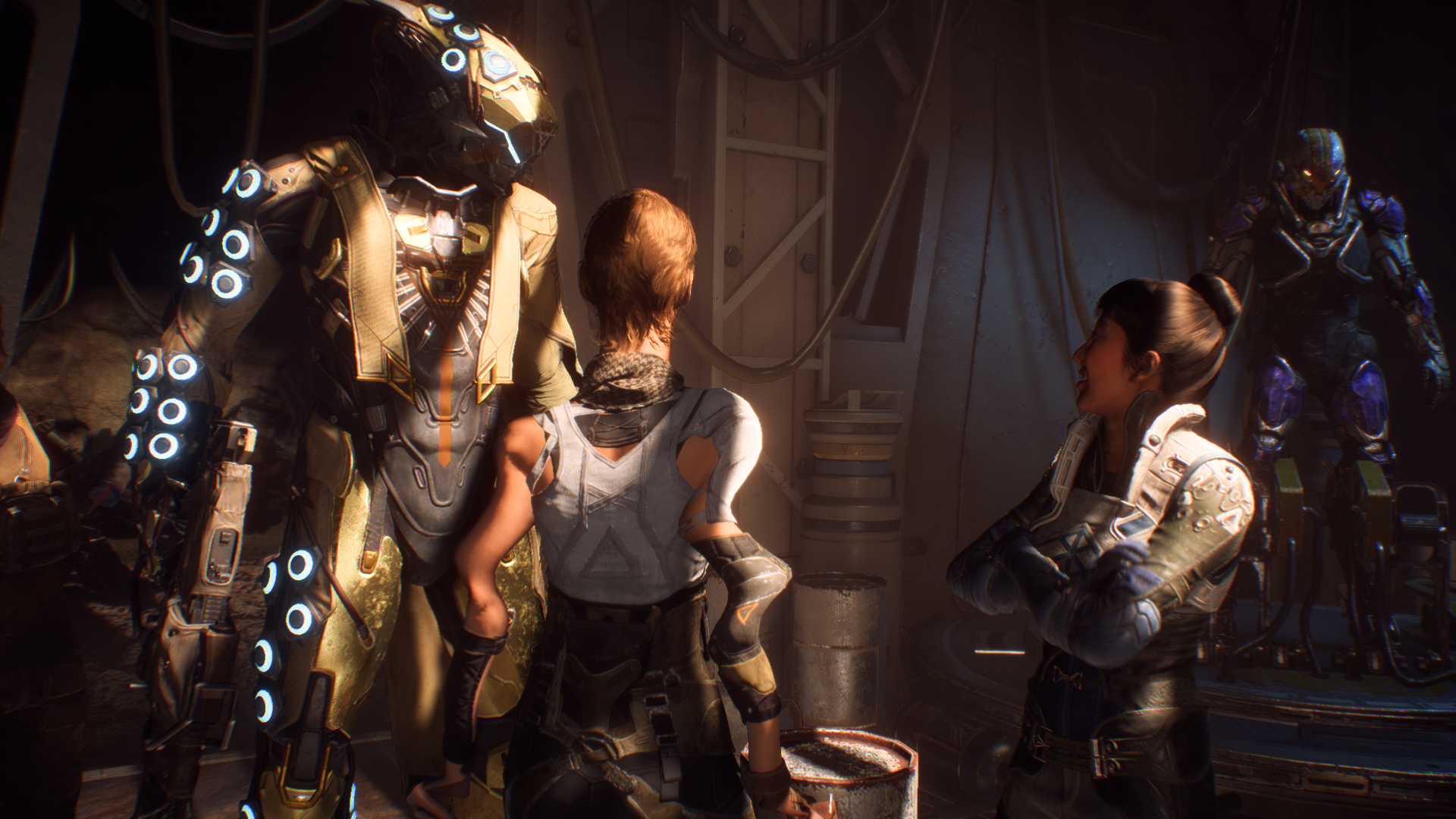 The not-a-day-one update apparently fixes a lot of things. I don't think it'll fix everything, but that's for the review. For now, let me say that I am cross this is what subscription service players got, the players that EA should be treating well and keeping on team, not pieing off with annoying bugs. That one about the treasure chests was driving Alice L. to distraction. As it turns out, perhaps Origin Premier isn't worth you paying them to be a tester.