If you click on a link and make a purchase we may receive a small commission. Read our editorial policy.
Premature Evaluation is the weekly column in which Steve Hogarty explores the wilds of early access. This week, he touches down on a barren moon of Saturn in extraterrestrial city builder Industries Of Titan.

Industries Of Titan has a refreshing attitude towards dirt and grime. Most city builders prefer to clutch their pearls when it comes to the unpleasant matter of pollution, chastising mayors as they construct the elaborate sewage networks required in order to pump vast quantities of human gunk into whichever unfortunate body of water happens to be farthest from your town hall. Hand-wringing civic advisors wag an accusatory finger as you redraw the boundaries of your landfill site, wider and wider, before delicately placing incinerators on top like it’s a big brown birthday cake.

Set on an already noxious Saturnian moon, Industries Of Titan is a city management game that embraces filth. Pollution is there to be managed, but everybody is fairly grown up and forgiving about it. Plonk a few smokestacks down and your settlement’s garbage is all burnt up and pumped out into the methane-rich (meaning it stinks of farts even without your intervention) atmosphere, becoming some other idiot’s problem. That idiot might be your future self, yes, but that guy probably deserves everything coming to them. 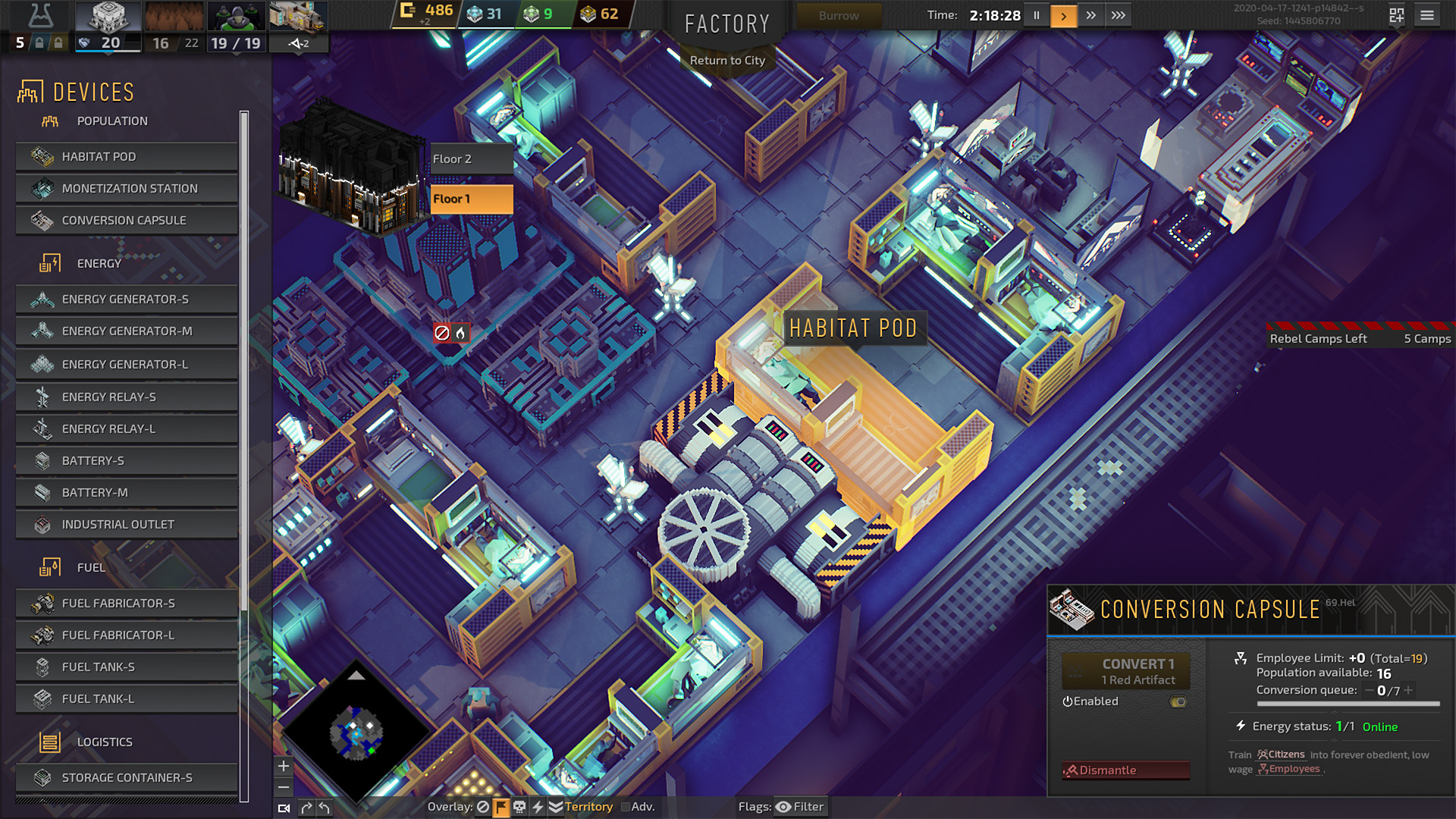 This is a city builder set tens of thousands of years into the future, in which your canvas is not the usual parcel of bucolic, untouched countryside but the rain-slick ruins of some long forgotten version of humanity’s failed attempt to colonise an alien world. To expand you use the currency of influence to buy up surrounding tiles, which are more often than not occupied by the charcoal husks of long-dead buildings, waiting to be stripped down for resources by you, the CEO and founder of an expansionist hypercapitalist society-corp. The suggestion, as you set out to blindly strip the moon of whatever useful materials you can using slightly more advanced technology than the doomed civilisation who came before you, is that history is repeating and nobody has learned any lessons.

Industries Of Titan is unique among city builders in that it lets you enter the buildings you’ve constructed to design their innards by hand, placing down furniture, modules and machinery on a grid to give each building a particular function. A factory is simply an empty box until you make it useful by customising its guts with storage containers, fuel fabricators and energy generators. Certain modules need electricity to run, requiring that you thread together relays to send power between floors, or to send it out of the building entirely and into the larger power grid in the outdoor city view. 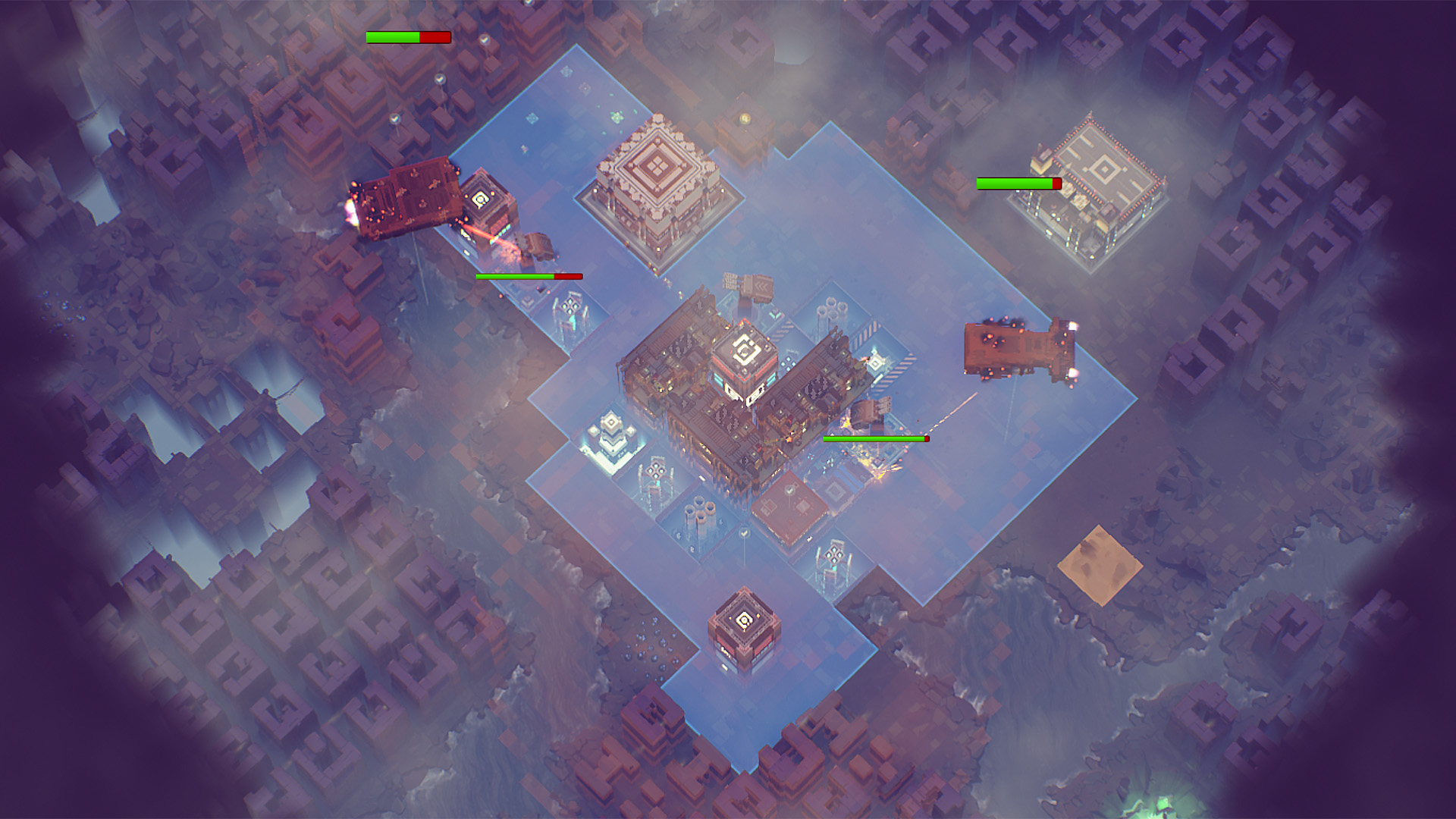 This Inception-style meta-management of your city’s components reminds me of that lovely moment in SpaceChem when you first start to thread your factories together, graduating from building a single efficient machine to using that same machine as a cog in something even larger. You might dedicate one factory to condensing fuel out of the acrid atmosphere and storing it in reserve, and another to housing your population, who can either be monetised by forcing them to watch pre-roll advertisements or turned into devoted employees through a nightmarish process of replacing their weak human organs with tireless bionic parts.

The two layers of the game operate in tandem as your workers excavate minerals and isotopes from the environment and physically place them inside storage contained within buildings. Where most other city builders obfuscate this aspect with some handwavey notion of an unseen, amorphous stockpile being filled or depleted, Industries Of Titan falls more in line with the likes of Rimworld and Dwarf Fortress, and has your collected resources exist right there in the world. A problem in the city view, like a gun turret losing energy and going limp, can usually be traced back to something very specific having gone wrong on one of the floors of your buildings. 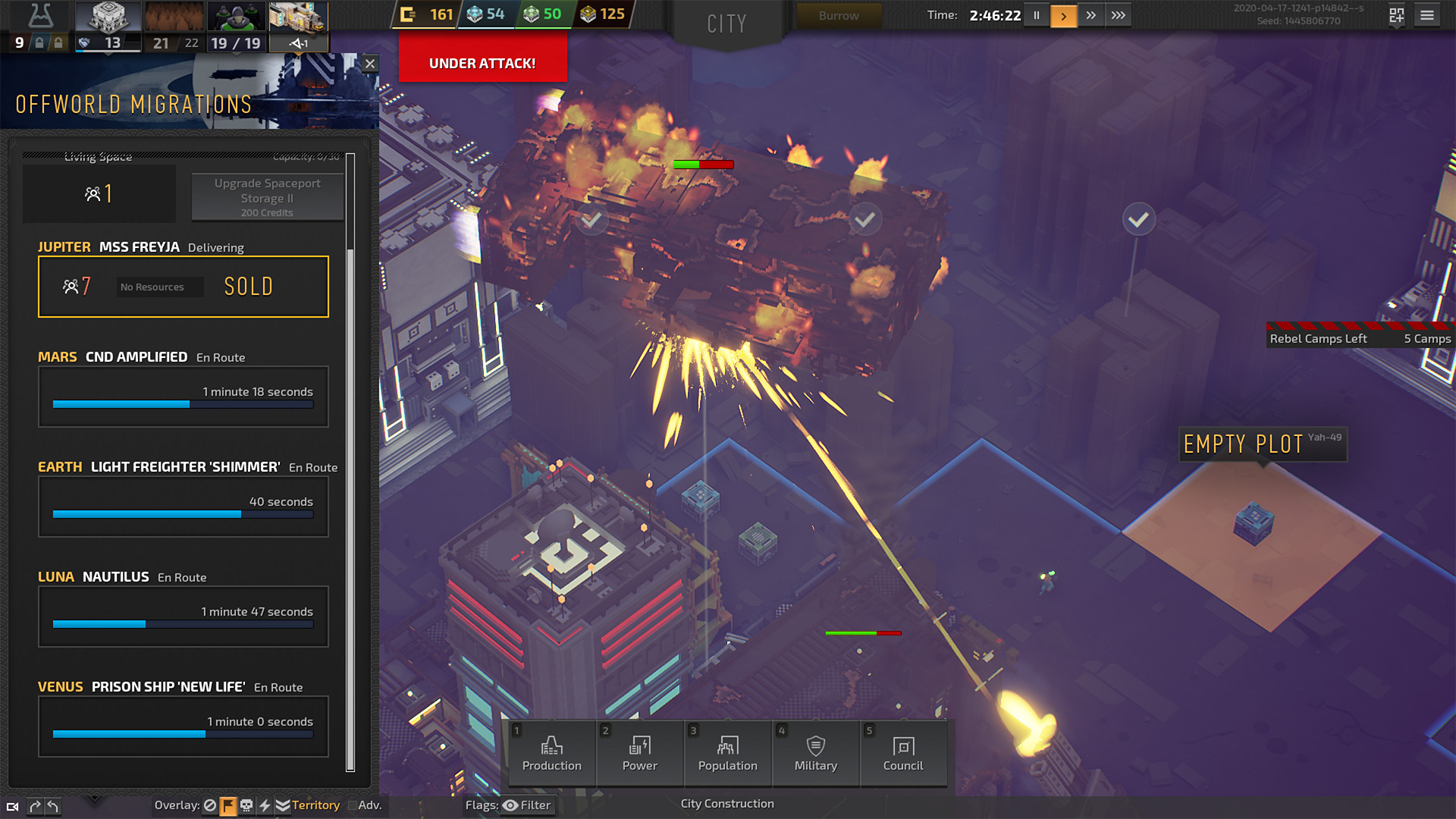 Once the tutorial ends this early access version becomes an open-ended sandbox, a balancing act between all of the various resources flowing into your city. Minerals and isotopes can be dug out of the ground as quickly as you can expand your territory to reach them, but credits can only be attained by blasting unemployed residents with ads, requiring that you strike a balance between forcibly converting your population into industrious employees or leaving them as mindless consumers. Potential new residents show up at the spaceport every few minutes, arriving from other worlds aboard interplanetary ships, and managing your growing population will become a less straightforward task as the game adds more features.

There are the barebone elements of conflict in place, as belligerent rebels will turn up every 15 minutes or so to bombard your city with their chonky attack ships. A few well positioned turrets can fend them off, but later updates promise some hot ship-on-ship action and a more fully developed combat system. Industries Of Titan has one the beefiest roadmaps I’ve seen of any early access title, waving an anxiety-inducing to-do list at you each time you load it up: production lines and transportation networks for moving resources around, the potential for your residents to become miserable and rowdy, quests and farms and rival corporations. What’s available now amounts to a foundation on which the rest of the game will eventually be built. If Industries Of Titan were a jigsaw, the developers have only just finished assembling all the edge pieces. 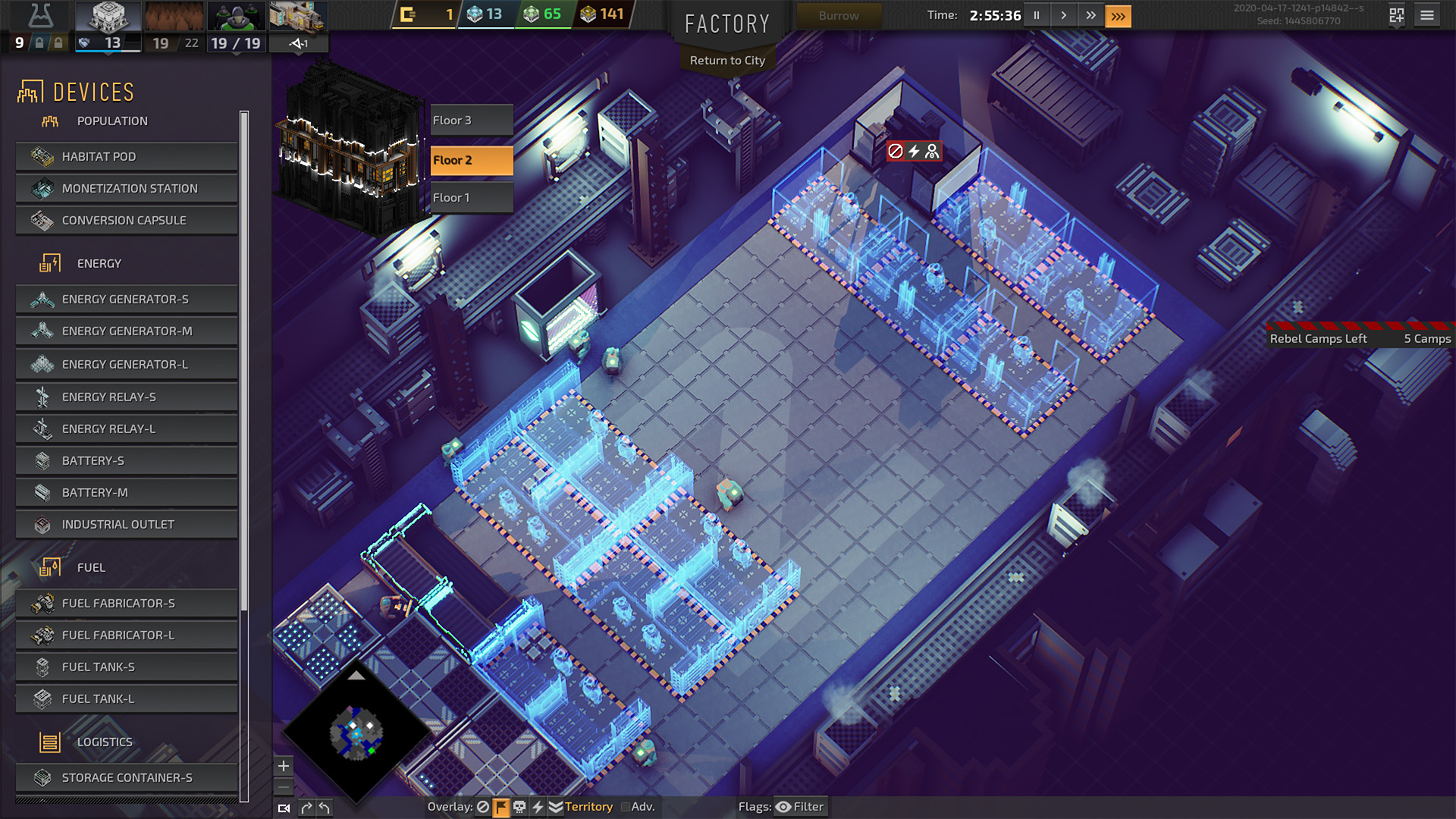 But what’s here is already a little bit magic. Industries Of Titan looks absolutely beautiful, a wet metal Blade Runner cityscape rendered in voxels and set to an industrial electronic soundtrack that puts me in mind of something Kavinsky would produce if he were ever locked in a basement and fed entirely on a diet of Philip K. Dick novels. The interface is slicker than those of most finished games, and there’s unexpected detail throughout, such as how each building in your city makes a distinct sound, so you can often hear a problem before you see it.

There might be diddly squit to do in this version besides build and build and gawp at the pretty scenery, but Brace Yourself Games has gotten everything right so far and I suspect they’ll continue to nail it as they expand into new features. This is a classic city builder in the making, but it’s best to wait until it’s a little more, well, made.