There are two games in recent memory which left me with an immediate thirst for more. Not in terms of story answers or glitzier sequels - it was simply that I wanted more of the same experience. I'd play a second Inside in a heartbeat - just more strings of strange and blackly comic scenes with well-judged, lethal puzzling. And I'd leap at the chance to swim in more of Abzu's gorgeous oceans, fish-watching anew. In lieu of that, InnerSpace looked like the next best thing - flying a spectral plane over land and undersea, gawping at fantasy fishies, revelling in glorious freedom of movement and a wash of colours, enduring no pressure other than that which I imposed upon myself.

InnerSpace isn't that, despite appearances and more than a few similarities. InnerSpace is far too scared that I might get bored. And so there is smashing, and strafing, and chatty demi-gods aplenty.

I'll lay off the Abzu comparisons shortly - I know it's a touch malign to repeatedly hold up one game against another, but I mentioned it because our outward looks at InnerSpace couldn't help but evoke that beatific swimming/fish-gazing affair. It's certainly why I gunned it up. InnerSpace is probably best described as a sort of astral flight sim, with a gentle focus on stunts such as zooming through cramped tunnels and using your nose to break open walls or wings to slice apart ropes.

It has a heavier focus on storytelling than I expected, which, honestly, is my biggest problem with it. Though it's admittedly not talking most of the time, when it does start to chatter away, it doesn't have the lightness of touch that would suit the dreamlike mood. A guide/quest-giver character is a right old prattler, while awoken, piscine demi-gods can't wait to tell your their tale in what is always just a few too many lines.

I'm afraid that I simply didn't engage with its ideas about an inverse universe and napping demi-gods, which are simultaneously too vague to achieve any emotional resonance and too over-explained to hold my attention. And too many front-loaded cutscenes, including sitting through the ol' faux-computer boot sequence chestnut, made me feel like I was being kept at arm's length from cosmic acrobatics from minute one, while not allowing me to raise the resolution above a smeary 1024x768 until I was ten minutes into proceedings only served to undermine its intended prettiness.

These are ancient oversights, and though I don't hold InnerSpace up as one of their worst culprits, they added to a mounting sense that it didn't enjoy all the common sense checks it could have done. Abzu - sorry! - managed to create the mythic tone that this is going for entirely wordlessly (as did Inside, for that matter). A little bit of show, don't tell would have worked wonders here. 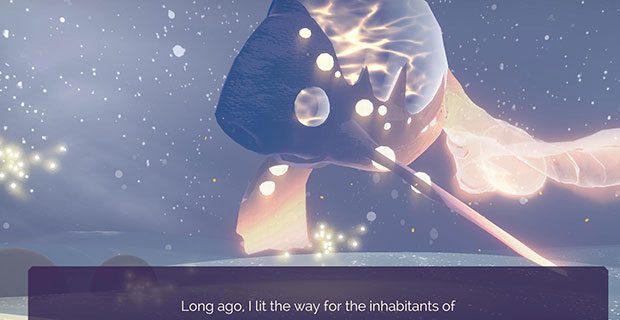 But it's the pairing of this failure to appreciate brevity with too many strict progress gates that made my couple of hours (I didn't play the whole thing; this is not a 'review' but rather than an explanation of why I drifted away from it early) with InnerSpace less than the sum of their wannabe-cosmic parts. I've mentioned Superman 64 syndrome around these parts a few times, but to summarise, it's when a game grants unfettered freedom of movement to its players, only to then seem to panic that it isn't game-y enough, and so then demand that they have to fly through particular hoops.

This, notoriously, was quite literally the case in Superman 64, and InnerSpace falls into much the same trap. Yeah, you can fly freely within whatever pastel-hued cavern formation or sparkly lagoon you're currently in, and unlike Superman 64 there isn't any kind of angry timer or combo meter that punishes failure, but to progress to new areas, it's hoop o'clock.

In fairness, the hoops take quite a few forms, including smashing through walls, using a slightly wonky drift system to rope-slice (and thus open up new doors) and button-mashing to escape from demi-gods' bellies, and generally it's fairly inventive about its open-the-door puzzles, but ultimately it's still hoops. Plus there's a whole collect the power-ups and magical floating orbs thing going on. Dopamine, my old enemy, can I never escape you?

In other words, InnerSpace spilled a whole lot of videogame all over a pretty, pleasantly noodly alt-flight sim. Maybe you need fixed challenges and plenty of lore to engage with a game, but in something that seemed to me to sell itself on a cosmic sense of freedom, it sadly turned me off before I saw it through. In other words, though I appreciate some of its flights of visual imagination, I just can't find a good reason to play more InnerSpace instead of playing Abzu again.