Much like every other person with a Steam account and a penchant for penetrating plate armour with pikes and pillaging poor pig farmers, I’ve spent a good portion of the last few weeks with mammoth medieval moshpitter Mount & Blade II: Bannerlord. I’ve besieged castles, sired heirs, and sniped horses. But recently, I’ve been wanting a bit more from the experience. Enraptured by the possibility of meeting new and interesting people to stab, I strapped on my platemail and saddled up until my wanderings led me to the Bannerlord Roleplay project, and its director, 'Flavberg'.

“If a player decides they want to play a priest character, they can write up a character sheet for this character, go on the server, and speak to the local church to join their parish," says Flavburg, giving an example. "They can start preaching the word of God, help and feed the poor, or they can become corrupt and demand indulgences from criminals. There is no limit to people's imagination.”

Put simply, Mount & Blade Roleplay is dozens - sometimes hundreds - of players and modders telling months-long collaborative stories of war, diplomacy, and medieval life, in persistent servers hosted in the infrastructure of Mount & Blade. Flavberg credits the start of all this to players ‘Blueberry of Swadia’ and ‘Gulos’, who created “the first serious, working server”. Initial features included emotes, inventories, personal horses, an economy, and crafting. Over time, the experience (and number of servers) grew along with the first Mount & Blade’s incredibly dedicated modding community and playerbase, resulting in mods like the famous Persistent Worlds, and the occasionally still-active Napoleonic Wars roleplay server.

“Roleplay in Mount & Blade had its ups and downs,” says Flavberg. “[There were] countless scenarios, and different server owners had their own vision for the game, but most of the ideas regarding the concept of serious roleplay remained the same - developing your character and interacting with others.”

Now, with the help of a team of modders, Flavberg is working towards creating a similar, though even more ambitious, module for Bannerlord. Planned features include custom classes ranging from infantry to engineers and physicians, player-led factions, crafting, NPC and player-run shops, survival features like hunger and injury, musical instruments, and a host of other things both large and small.

Flavberg says the server is looking to provide players “the possibility to fit in the role of a realistic, Medieval character.” The server will also have its own lore, starting around the state of Calradia at the start of Bannerlord’s single-player. If the community's past efforts are anything to go by, it’s clear that lore isn’t just an afterthought, either.

The first scenario the group officially made and ran was ‘Fearichen’, named after the in-game village that acted as the border between the Vaegir and Swadia factions, and “what remained of the Nords.” Establishing lore, they set the timeline back from Warband’s native 1257 to 1061. The Emperor’s ageing body was failing him, throwing the Empire into decline. The Nords had been pushed back and conquered on the West by Swadia, and the East by Veagir, until only a few meagre tribes remained.

For six real-life months, both the Vaegirs and Swadians tried to wipe out the Nords from the peninsula. The hardy Nords, undeterred, joined together and held out against their overwhelming foe.

The scenario, says Flavberg, resulted in a good balance between character development roleplay and skirmish battles between “close to a hundred players.”

“It's not uncommon for lords, who are played by players, to become very good friends with other players who play, for example, soldiers in their garrisons, and learn to trust them a great deal, which sometimes leads to having them be knighted or made captains of their garrison.”

Nobility isn’t just for show or a fancy title, either. Lords and nobles from all three factions would promote other players and gift them armour, weaponry, money, and sometimes lands, “if only to have elite retinues that are around to protect them and do their bidding.”

I had to ask though: in a feudal medieval society, how do you get new players to agree to play a serf over a lord in the first place?

It turns out that nobles are almost like moderators, or community managers. “It's very tiresome work for players who are nobles, as while it's a nice title that offers a lot of perks, it also brings a lot of responsibility with it," Flavberg explains. The staff team's job is to make sure rules are not broken and everything runs smoothly. The nobles are in charge of making sure things run and everyone's taken care of.”

As much as I’m sure ‘tiresome work’ is exactly what a pampered lord would say while he wonders why the royal pitchfork sharpener has taken such a keen interest in his work of late, it sounds like a great approach. Nobles, says Flavberg, are picked first from the most active and dedicated members of the community. In the game, they control lands, the best gear, and the lion’s share of the funds, which they can dole out on their server. They also oversee diplomacy with other player factions.

“Since everyone wants to become a noble and be an epic knight, we generally looked after good character concepts and people who could be examples to others, while being proactive community members who helped others and could dedicate their time to managing a faction.”

Other players take the role of ‘commoners’, creating a character, receiving a basic tunic and some tools for their chosen trade, like farming or fishing. “The setting always empowers people who have friends and allies, so joining a faction and being oathed to a lord is always better than being a mercenary without a home.”

Over time, says Flavberg, players gather wealth by working, joining a garrison, or in some cases, even turning to crime. After all, any profession that would have existed in real life is an option in the roleplay. “We've had plenty of people turn their characters to crime to get coin faster. These characters are hard to play, however, as they require good roleplayers to assure they're not there just to ruin people's fun by taking their money away.”

Flavberg says that the group, as a rule, try not to influence the setting too strongly, but let players define the story themselves, and this extends to lawbreaking. A player taking the role of a lord may have a garrison for wartime defence, while during peacetime, he could task them with earning their coin and crust by guarding his town and lands. The player-character formed garrison would then patrol, looking for criminal scum to stop right there, with the power to arrest, imprison, issue fines, or even "make a public spectacle out of it. Public executions, although rare, are also a thing.”

This is still Mount & Blade though, so peacetime is a fragile thing. The lore the group set out establishes each faction’s starting state, but this is far from static. As the settlements grow through player actions, the modding team work in real-time to grow the setting.

“People generally tend to like building stuff, which works in mostly a roleplay manner, meaning that a group of people gather up, they plan a building project, they contact the staff team with their desired structure, they gather materials and role-play building it, then the mapper will put it on the map itself after some time.”

Flavberg gives examples from Fearichen, where the Nords built an outpost outside of their peninsula while another group established a fort - including houses and an armory - inside of a ruin, becoming their own small power. 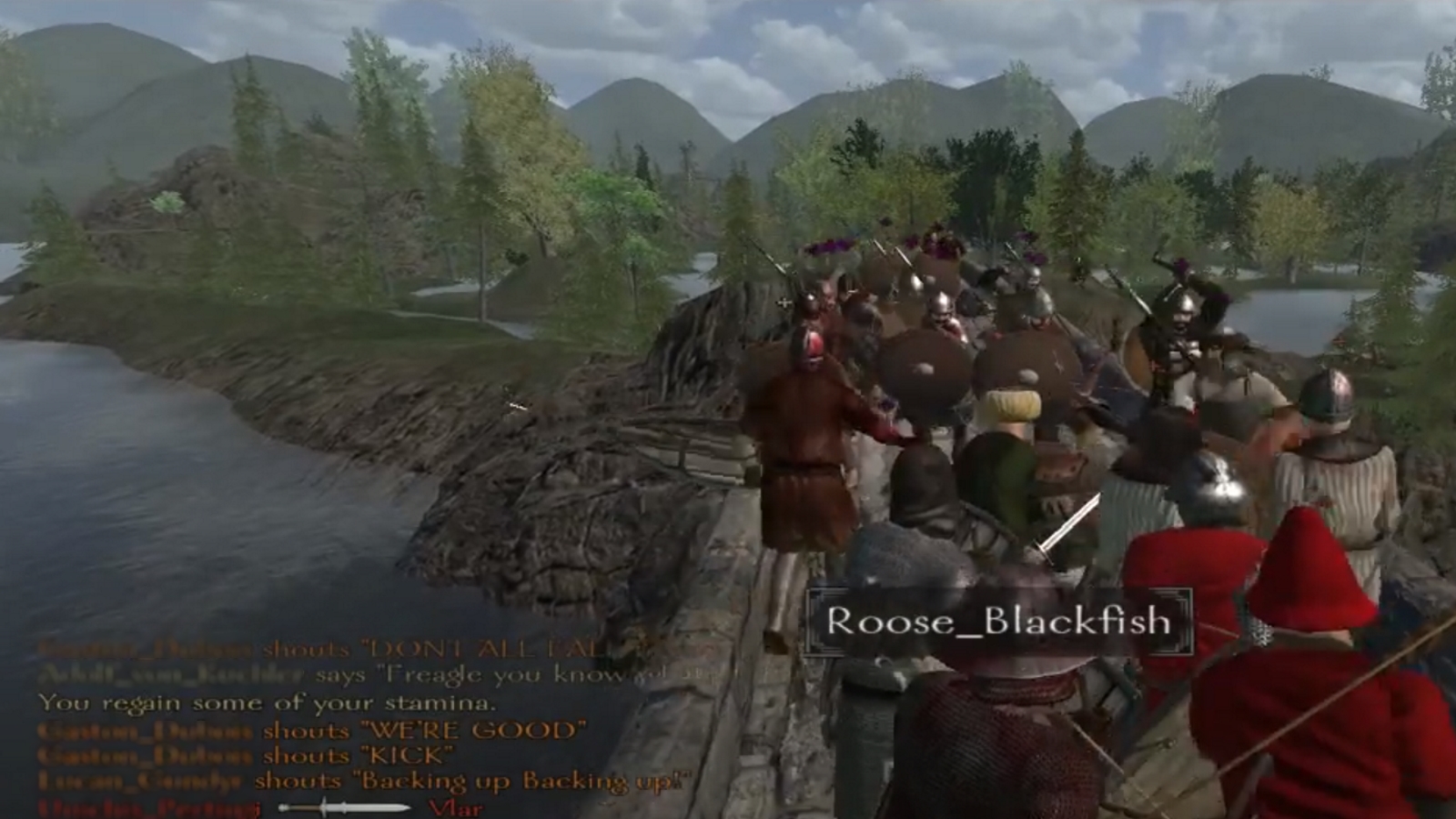 Still, that same growth from a few stones to a towering fortress is, for the Bannerlord Roleplay project, still in its early stages. Taleworlds are yet to release much info on custom servers, and the group are still in the process of designing features. The maps, especially, are a huge undertaking.

“It can take up to three or four months to make a decent map of that size," says Flavberg, "Seeing as you have to create the scenery, terrain, design the castle and village layouts, make custom interiors for all the houses, keeps, armouries and so on, place object detail and props, vegetation, etc..”

They’re also still gathering folk together. Flavberg says that they’re still on the lookout for animators, modellers, and texture artists for the project. “We have a good team of coders for now, but more help would never hurt.” And indeed, you can find them on Discord, if you fancy getting involved.

“Most of the roleplayers in the Mount & Blade community basically grew up with each other, being a very tight-knit community at its core,” says Flavberg. “It was a good time, though, I met many people that are now very good friends of mine in this community, and this is one of the things that about these servers and communities: they unite people and entertain them. It creates a good environment for everyone to play in, and that is one of our main pursuits, to make sure it's fun for everyone.”