Intel's Core i3-8350K CPU probably isn't the first processor you'd think of for building your next gaming PC, but this £170 / $195 quad-core chip holds its own surprisingly well against the Core i5 and Ryzen 5 big boys. Priced at a similar level to AMD's Ryzen 5 2600X CPU, Intel's Core i3-8350K could be just the thing if you're looking for a new best gaming CPU that doesn't end up breaking the bank.

A large part of the Core i3-8350K's appeal comes from those four cores I just mentioned. Previous Intel Core i3 CPUs only ever had two cores to their name, for example, so the fact that Intel bumped this up to four for their 8th Gen Coffee Lake Core i3 chips is really quite the thing. Not only does it give them a bit more oomph for everyday desktop tasks, but it also makes them a viable proposition for gaming, too - especially if you're after a gaming CPU that doesn't cost more than £200 / $200.

Another point in its favour is its high base clock speed of 4.0GHz. This is actually a lot nippier than some of Intel's other CPUs up the line - the Core i5-8400, for example, only starts at 2.8GHz - and, as you'll see from my benchmarking results below, actually gives it a pretty decent leg up when it comes to overall performance.

There are some downsides to the i3-8350K, though. Unlike the latest crop of 9th Gen Coffee Lake Core i3 CPUs, for example, it doesn't support Intel's Turbo Boost technology. This means its max speed will be forever locked at 4.0GHz - unless, of course, you try overclocking it (but more on that in a second).

There's also the fact it doesn't support Intel's Hyper Threading technology, either. This means that, despite doubling the number of cores from the previous generation of Core i3 chips, you still only get four threads. On paper, this puts it at a disadvantage compared to AMD's six-core, twelve-thread Ryzen 5 2600 and 2600X CPUs, and for regular desktop duties, sure, you'll probably see and feel the difference. For gaming, though, I really wouldn't get too worried about it - and the same could be said for the whole 'no Turbo Boost' support thing, too. 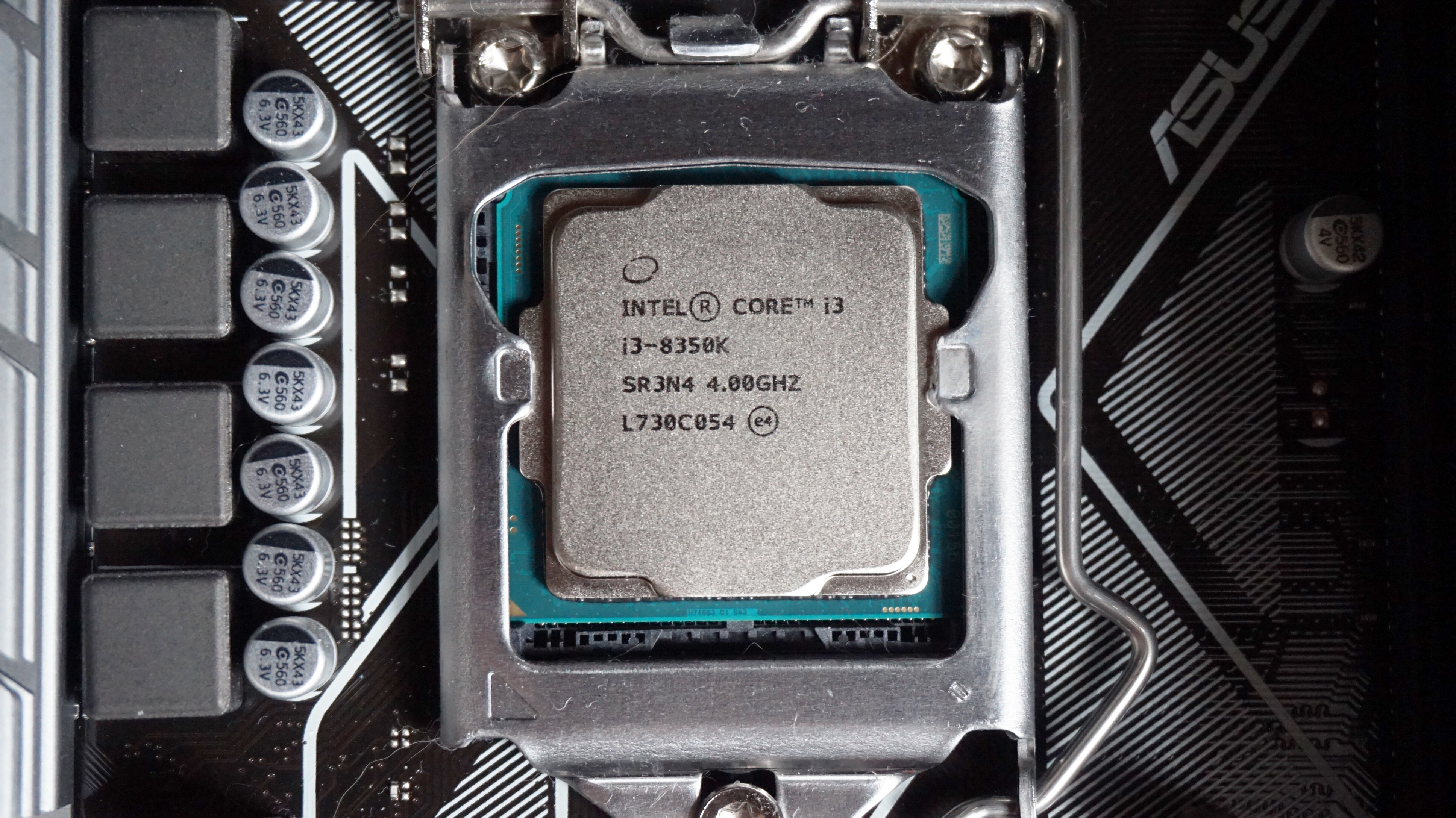 Now, I'll be upfront. Testing a CPU's gaming performance is still a bit of a nebulous exercise. As our friends at Digital Foundry have explained in the past, a lot of benchmarks either don't test your CPU properly, or simply aren't very accurate in the first place. Fortunately, a handful of gaming benchmarks have got a lot better at this recently, with the likes of Shadow of the Tomb Raider, Forza Horizon 4, Assassin's Creed Odyssey and more all providing an in-depth look at your CPU's performance as well as what your graphics card's doing.

I've also focused a lot more on gaming performance than I have, say, on application performance or media creation bits and bobs because, well, I'm not really interested in that. I've included some cursory Cinebench scores as a basic indicator of what each CPU will be like for general desktop tasks, but really, my main goal here is to work out what CPU is the best for gaming and gaming alone. 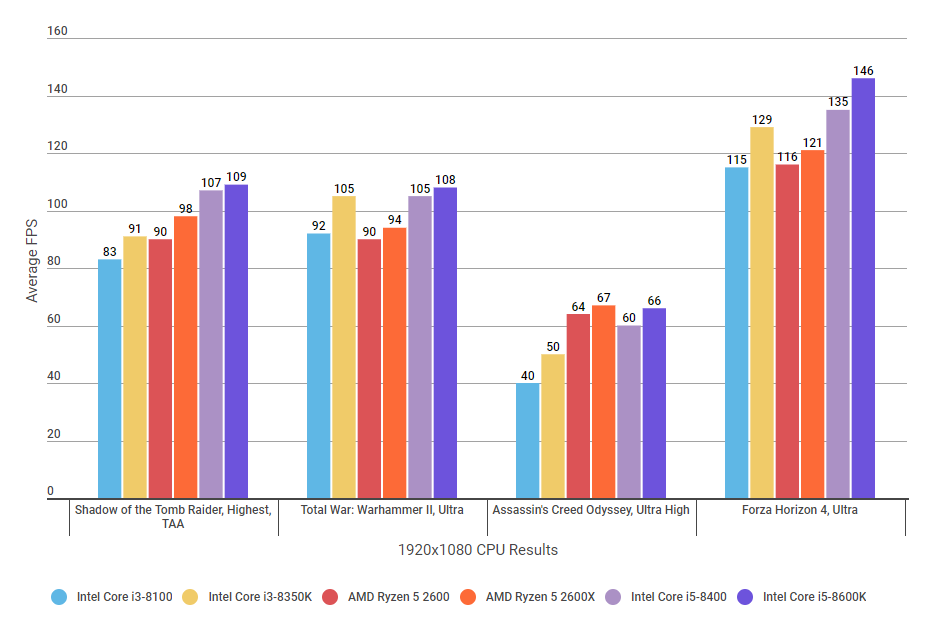 Of course, it's hard to say whether that kind of performance gap will translate exactly to the lower-end GPUs you're more likely to be pairing this particular processor with, but in my eyes, the i3-8350K puts in a pretty good showing against its similarly priced Ryzen 5 2600X rival. As I mentioned in my Intel Core i3-8100 review, the non-X Ryzen 5 2600 is probably still the better value choice for those on a budget, but if you do have closer to £200 / $200 on your gaming CPU, then I reckon you've got a couple of options at your disposal. 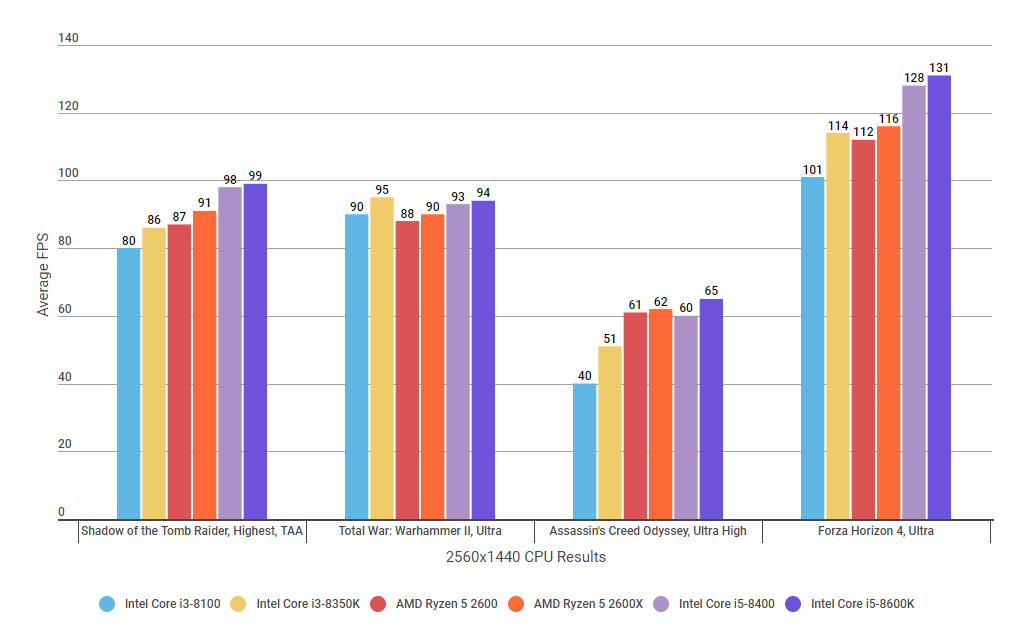 If you're after a CPU that's purely for playing games, then you should probably go with Intel. The Core i3-8350K offers a solid foundation, but it also doesn't come with a cooler in the box, so you'll need to factor that on top of the cost of the processor - and by the time you've picked out a decent cooler, you may as well just have gone with the Core i5-8400, which does come with a cooler and only costs an extra £15 / $20. Sure, it might not perform quite as well as in Assassin's Creed Odyssey as the Ryzen 5 2600X at 1080p, but it does come out on top everywhere else - and by quite a decent margin over both the i3-8350K and Ryzen 5 2600X.

If you're planning to use your PC for things other than gaming, however, then you'll probably be much better served by the identically-priced Ryzen 5 2600X. It might not be quite as quick as the i3-8350K or i5-8400 in absolutely every game going, but it's still pretty nippy in its own right and also offers significantly better multicore performance for more creative tasks such as photo and video editing - as its giant Cinebench multicore score will attest. Plus, it comes with a cooler in the box. 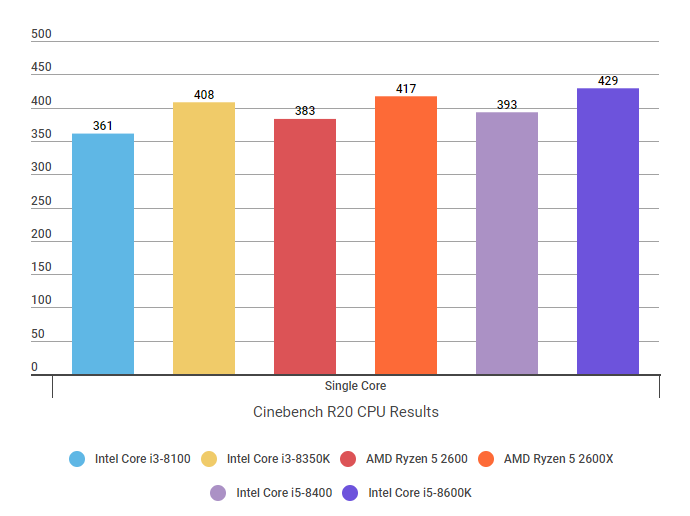 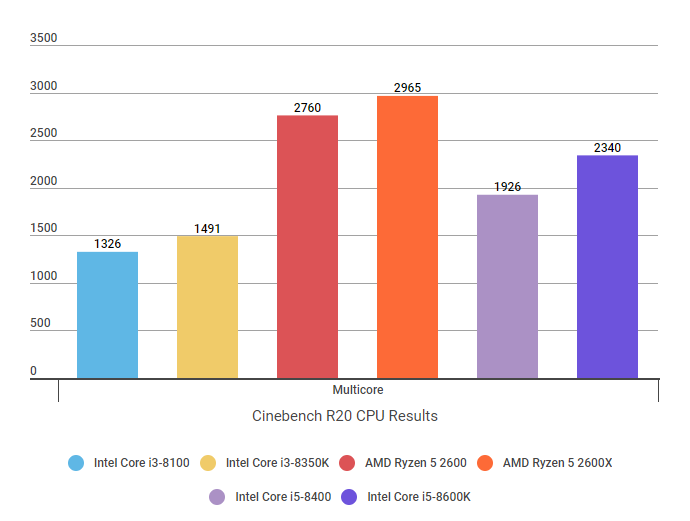 But what about the Core i3's overclocking ability, I hear you ask? Doesn't that make it better than the non-overclockable Core i5? Well, yes and no. With my BeQuiet cooler, I was able to get the i3-8350K running at a stable 4.4GHz using Intel's Extreme Tuning Utility tool before it started to conk out, which, yes, is a lot faster than the Core i5's max Turbo speed of 4.0GHz.

However, while this gave it a very welcome boost to its single core performance in Cinebench, raising it all the way up to 445 (which is something that even Intel's Core i7-8700K couldn't beat running at stock speeds), it made naff all difference to its overall gaming performance. I managed to get a couple of extra frames out of Total War: Warhammer II, but that was it. Everything else was exactly the same as it was running at the CPU's stock speeds, so you're not really gaining as much as you think by opting for an overclockable CPU as opposed to a locked one.