If you click on a link and make a purchase we may receive a small commission. Read our editorial policy.
Intel Core i9-10900K review
A stupidly fast gaming CPU that's cheaper than its predecessor, but you'll need a new motherboard and some serious cooling to make the most of it.
Watch on YouTube

When Intel declared their 9th Gen Core i9-9900K was the world's fastest gaming CPU at the end of 2018, it came at an astronomical cost. £600 / $580 was the asking price for the best gaming CPU money could buy at the time, which today could get you an entire RTX 2080 Super GPU. Thankfully, Intel have reined in the pricing for their brand-new crop of 10th Gen desktop CPUs, with their flagship Core i9-10900K receiving one of the biggest price cuts across the entire Comet Lake family. It will still set you back a sizeable $488 in the US (UK pricing TBC), but with its closest AMD rival, the Ryzen 9 3900X, coming in just below it at $440 at time of writing, it does at least look more competitive than it was a generation ago.

Indeed, a cursory glance at the i9-10900K's headline specs - its 10 cores, 20 threads and 14nm manufacturing process - might make it seem like Intel's latest and greatest is already a bit old hat compared to 12 cores and 24 threads of the 7nm Ryzen 9 3900X. And in some respects it is. AMD still have the fastest CPU for juggling lots of multimedia tasks, but in terms of raw gaming performance, the Core i9-10900K is in a class of its own, blazing past its AMD rival with frames to spare. It is, without doubt, the best gaming CPU you can buy right now.

Clock speed has been a big focus for Intel's 10th Gen Comet Lake CPUs, and nowhere is this more prevalent than the Core i9-10900K. While the Core i9-9900K ushered in an era of achievable 5.0GHz boost speeds, the Core i9-10900K goes even further by pushing that up to a massive 5.3GHz. This is down to Intel's Thermal Velocity Boost technology, which automatically allows the Core i9-10900K to go beyond its normal Turbo Boost speed when there's enough thermal headroom. 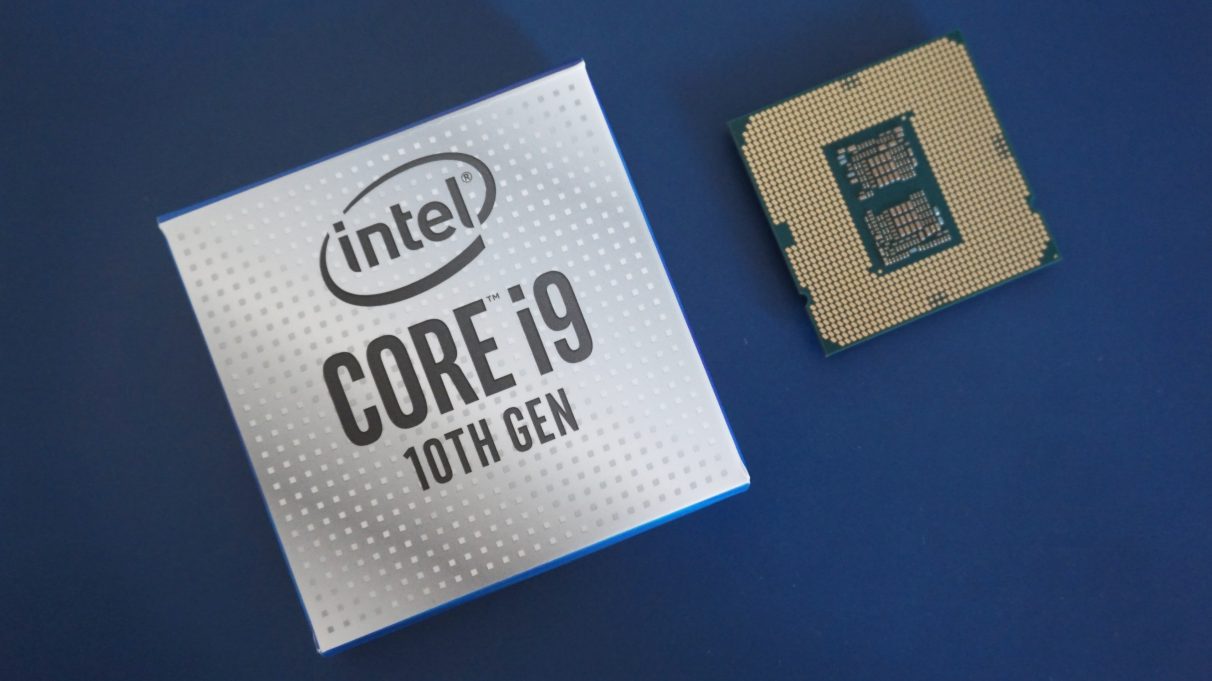 I should note that you're probably not going to see that top speed of 5.3GHz a lot of the time, as Intel's Thermal Velocity Boost tech only kicks in during very specific conditions. You need version 1909 of Windows 10, for starters, and Intel's testing guidance also states that the CPU's temperature must remain under 70 degrees Celsius as well. Liquid cooling is therefore a must, as regular tower coolers just won't cut it. However, even then you're unlikely to get much benefit when playing games, as tasks which require more than one core will see that top speed fall to 4.9GHz.

That's still quite nippy compared to the Ryzen 9 3900X's max boost speed of 4.6GHz, but it does come at a cost: power. Whereas the Core i9-9900K had a thermal design point (TDP) of 95W and the 3900X had one of 105W, Intel's Comet Lake successor raises that number to a considerable 125W. As a result, you're also going to need a relatively beefy power supply at your disposal, too - and probably one with two power connectors to make the most of your accompanying 400-series motherboard as well, which is the only chipset that's compatible with Intel's 10th Gen Comet Lake CPUs right now due to their new LGA-1200 sockets. That's right. Another generation of Intel desktop CPUs won't be compatible with your existing motherboard. Again.

Admittedly, I only ever saw a top speed of around 5.04GHz when I fired up Cinebench's R20 single core benchmark on the Gigabyte Z490 Aorus Master motherboard Intel sent me for review, and that was with the correct version of Windows 10 installed, my 16GB of Corsair Vengeance RGB Pro RAM clocked at its top XMP profile of 4000MHz, and Corsair's H150i RGB Pro XT all-in-one liquid cooler keeping the i9-10900K's temperature at a positively cool 50-odd degrees. Perhaps my SSD was letting me down, or perhaps it was the lack of a second power connector on my PSU. It's hard to say. There will, however, be a new version of Intel's Extreme Tuning Utility tool coming soon, though, and I'll be putting the Core i9-10900K through some further testing once it's properly available to see exactly what's possible when you start overclocking it.

Still, even without those headline-grabbing speeds in evidence, the Core i9-10900K still makes for a positively stonking gaming CPU, kicking AMD's Ryzen 9 3900X into the middle of next week. Of course, as I’ve mentioned in previous CPU reviews, testing a processor’s gaming performance is still a bit of a tricky undertaking, as a lot of in-game benchmarks either don’t test your CPU properly or just aren’t very accurate in the first place. Fortunately, a handful of gaming benchmarks have got a lot better at this recently, with the likes of Shadow Of The Tomb Raider, Forza Horizon 4, Assassin’s Creed Odyssey and the Total War games all providing an in-depth look at your CPU’s performance as well as what your graphics card is doing.

However, as you may have surmised already, there are other factors that can affect your CPU's gaming performance as well, such as your graphics card, the type of RAM you’ve got and the type of storage you’ve got your games installed on. I’ve tried to mitigate these problems as much as possible by using a WD Black 3D NAND NVMe SSD for my games storage as well as today’s best graphics card, the Nvidia GeForce RTX 2080 Ti. As for my RAM, I've tested the Core i9-10900K at the Corsair Vengeance RGB Pro's default speed of 2133MHz for the sake of parity with all my other CPU benchmarks, but I've also tested it at its top 4000MHz speed to see exactly what it's capable of as well.

And the results are impressive. Even when it's paired with a basic RAM speed of 2133MHz, the Core i9-10900K shows some considerable gains over AMD's Ryzen 9 3900X and its Coffee Lake predecessor, particularly at 1080p. In Shadow Of The Tomb Raider and Forza Horizon 4, for example, the Core i9-10900K offers a huge boost in performance, which alone could almost be compelling enough to convince existing i9-9900K owners they're in need of an upgrade. However, the inter-generational leap was less marked in some of my other benchmark results, such as Assassin's Creed Odyssey and Total War: Warhammer II, and the gap between them at 1440p and 4K narrows even further. 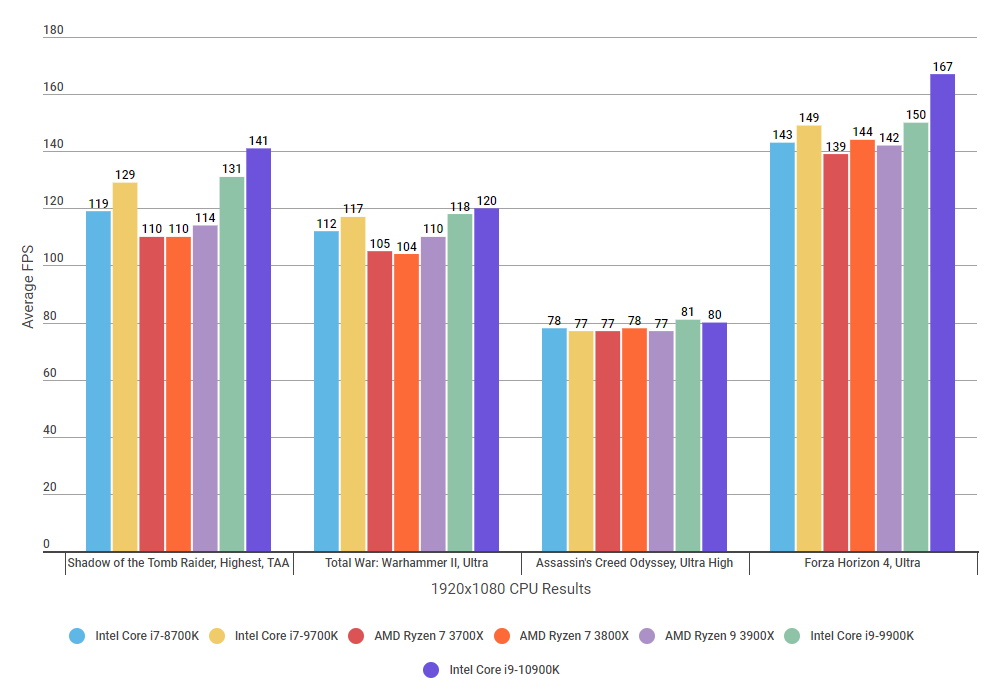 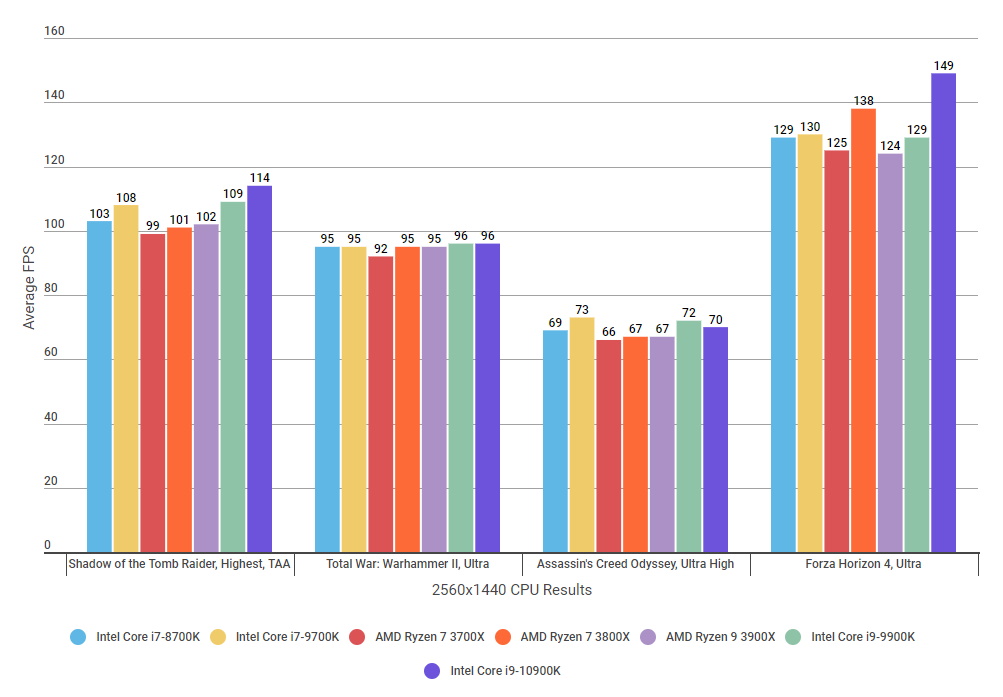 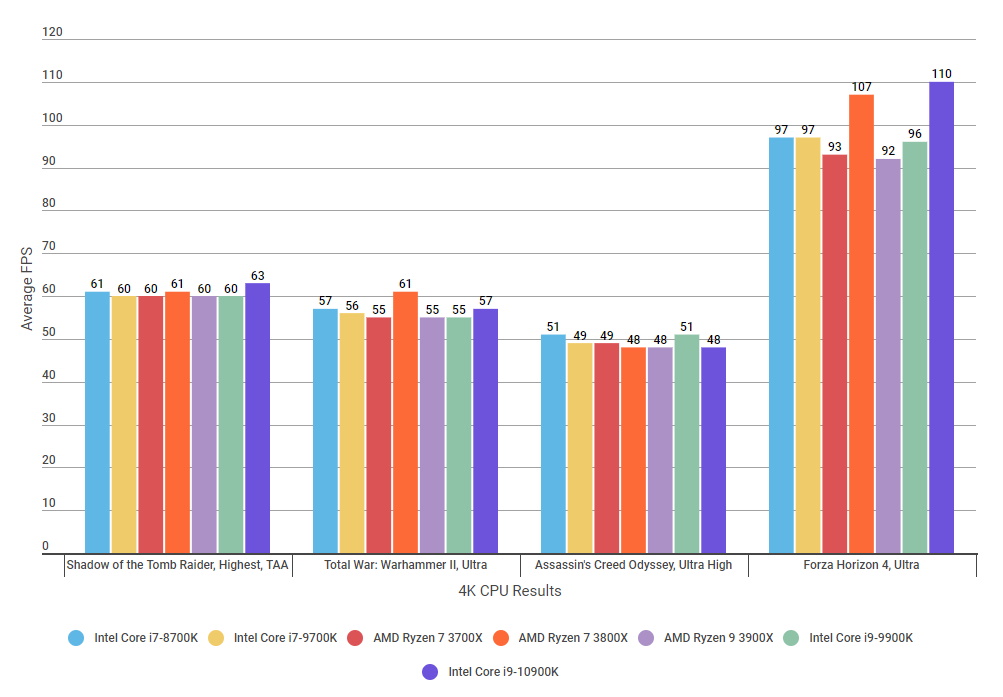 Of course, bung in some better RAM speeds and the Core i9-10900K absolutely soars, reaching an average of 155fps in Shadow Of The Tomb Raider, 134fps in Total War, 85fps in Assassin's Creed and a massive 181fps in Forza Horizon 4 at 1920x1080. Alas, those gains quickly fade away again once you start moving up through the different resolutions (the most it managed at 1440p was an extra 3-4fps over its 2133MHz scores, while its 4K results were almost identical), but it was a very similar story over with the Ryzen 9 3900X when I re-tested it with some 3600MHz RAM.

Alas, I no longer have my 3900X sample (or indeed the 3600MHz RAM) to see how it would fare on a more level playing field, but when it only managed 132fps in Tomb Raider, 124fps in Total War, 81fps in Assassin's Creed and an identical 142fps in Forza with the 3600MHz in tow, I can't see it catching the Core i9-10900K even if I did get one back in for additional testing.

To cap things off, the Core i9-10900K's general desktop performance is right up there with its Ryzen rival as well. Indeed, while I may not have seen that heady peak of 5.3GHz when I ran Cinebench's R20 benchmark, the Core i9-10900K's single core result of 517 is still the best I've ever recorded, putting it 4% ahead of the 3900X and 9900K. The biggest gains, however, are to be found in its multicore performance, where its extra two cores put it an impressive 36% ahead of its Coffee Lake predecessor with a score of 6296. That's just 7% behind my Ryzen 9 3900X result of 6786, which is probably the closest Intel have ever come to matching AMD's monstrous multitasking capabilities. 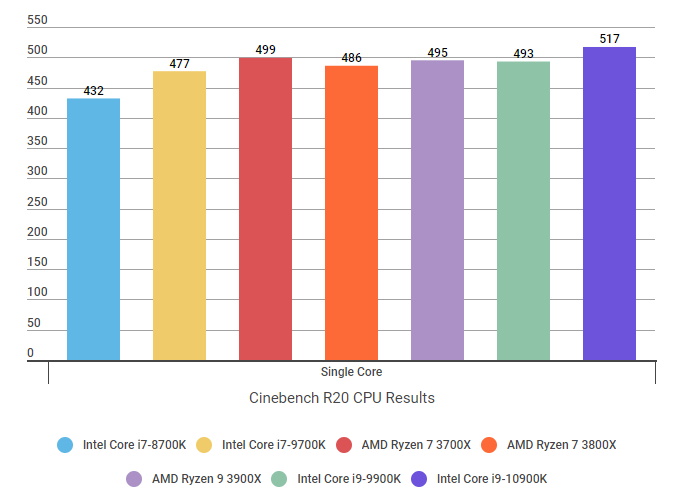 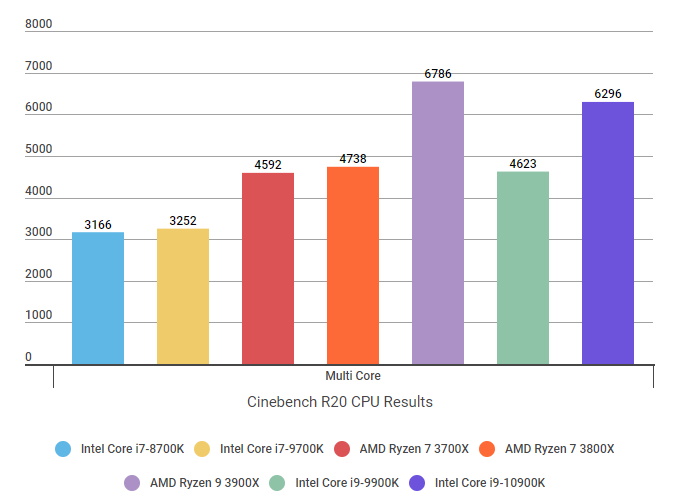 Ultimately, the numbers speak for themselves. Intel's Core i9-10900K is, indeed, the fastest and best gaming CPU money can buy right now, and its gaming performance far outshines its mildly cheaper Ryzen 9 3900X rival. Whether you actually need such monstrous speeds for playing PC games is up for debate, of course. The Core i9-10900K does, admittedly, have price on its side compared to the 9900K, whose ludicrous price and only modest gaming performance gains made the Core i7-9700K (or indeed, AMD's Ryzen 7 3700X) a much more sensible purchase for high-end PC gamers. However, until Intel send out review samples of their Core i7-10700K, it's hard to say whether the Core i9 will end up in the same boat.

Still, even at its lower asking price of $488, the i9-10900K still involves a considerable cost. Given its high TDP and restrictive thermal requirements for hitting those top speeds, you'll need to factor in the cost of a beefy cooling solution if you don't already have one (the H150i RGB Pro XT that Corsair provided me for this test would set you back another £150-odd, for example), not to mention a new 400 series motherboard. If you want a top of the line Gigabyte Z490 Aorus Master like the one Intel sent me for review, for example, then prepare to spend another £380. Altogether, it's an undeniably expensive upgrade. The Ryzen 9 3900X, on the other hand, does, at least, come with its own, pretty decent cooler in the box to help delay some of the cost of upgrading if don't have the cash to buy an all-in-one liquid job at the same time, and it's compatible with all current AM4 boards, too (although you'll naturally get the best speeds by opting for AMD's more expensive X570 series).

The Ryzen is probably an easier and friendlier sell, then, but when the Core i9-10900K is only another $50-odd at time of writing, it does also seem a bit silly to lumber yourself with its inferior gaming speeds for the sake of saving a bit of money. The i9-10900K may be the best gaming CPU around right now, but we'll have to wait until the Core i7-10700K arrives to see whether it's really worth its weight in gold.