If you click on a link and make a purchase we may receive a small commission. Read our editorial policy.
Developer: GrizzlyGames
Publisher: Grizzlygames

I know I've banged on about this enough that people are wishing it had happened three weeks ago already, but I'm leaving RPS (and full-time games journalism) in 5 days. Regrets, I have more than a few, but right now chief among those is that we are in the throes of a building game renaissance. I'm pretty burned out on shooting stupid pretend men in their stupid pretend faces, but I could have gone a good few more years arranging tiny settlements just so. Foundation, Dawn of Man, Tropico 6, Satisfactory on the more production-based end of things, Two Point Hospital if you want throwback, Kenshi if you want far, far beyond building: these are the finest of times for a genre once left to starve and die. Heck, I won't be here for the next Anno.

Now here comes Islanders to rub salt in the wound, another clever and beautiful twist upon old plop'n'play tropes, another herald of good things to come that I won't be here for. Screw you, Islanders! But I really like you.

Islanders is a competitive building game, but it's not truly competition with others - it's competition with yourself. How long can you last, i.e. how much can you build, before you paint yourself into a corner? Getting access to the big stuff, the circus tents and tranquil resorts and big fuck-off towers, isn't about amassing wealth or clawing your way up a spindly tech-tree, but rather it's about keeping on keeping on for long enough that the game cheerfully doles it out to you.

Islanders is built around points, which is something I have mixed feelings about - there's a blatant artificiality to it, a gameiness which sits a little ill at ease with the calm, pastle hues and chubby cuboid shapes, but a) I can't think of a better way to do it b) I'm demob-happy so I'll let it slide. Place certain buildings in close proximity to other certain buildings, and you'll get more points. Place them on their lonesome and you won't get many, or place them too close to philosophically-opposed buildings, e.g. a circus tent amongst mansions, and you'll lose a shedload. 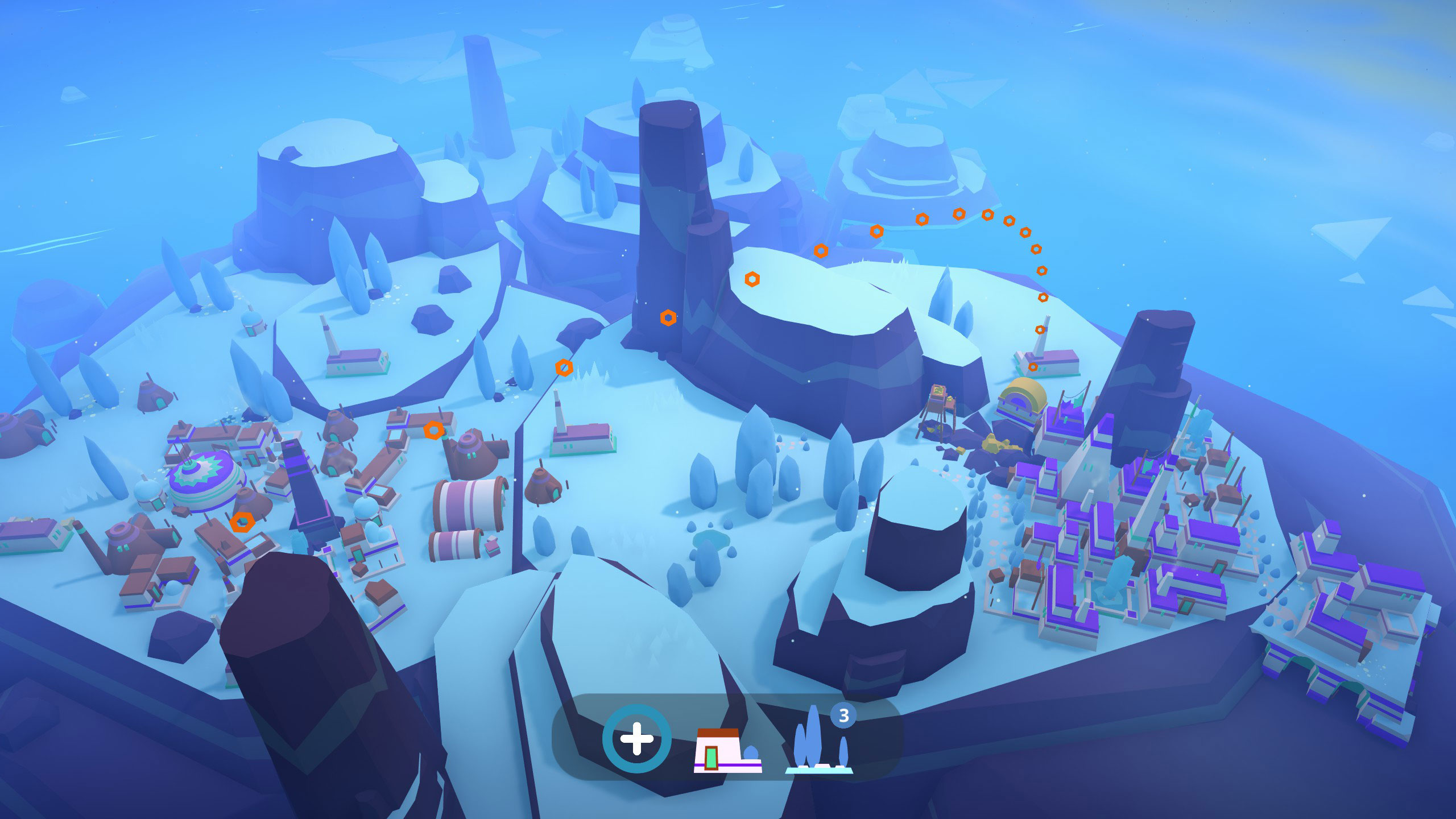 Every building has a range of influence, which you want to try to keep associated new constructions within. So this is a sort of island commune Tetris, fiddling and rotating until you find out where you can squeeze in an extra house or Shaman's hut for 17 points. You'll progress from small combos of 9 or 10 points to, once you've learned the flow and how to plan in advance from a few failed sessions, dropping 40-point bombs and cackling in delight.

Hit various point milestones and Islanders'll give you a choice of what buildings you can add to your hand. Sometimes it's just three more houses and a couple of fields, or tough it out long enough and it might be a giant plateau or a gold mine. Fail to hit a milestone and you don't get any more buildings, and thus the game ends. Which means your painstakingly-built island community is consigned to the dustbin of history. But that's OK, because it only took 10 - 20 minutes to build, and you'll immediately start on a new one and forget all about it. This is city builder as roguelike, losing everything but never feeling so demotivated by your failure that you don't immediately start again.

This is where the tyranny of points fades: after a while, it stops being about the individual numbers of a mansion or a mine, and instead becomes about what big huge toys you get to play with if you last long enough. And, of course, about the big huge number at the end of it all. 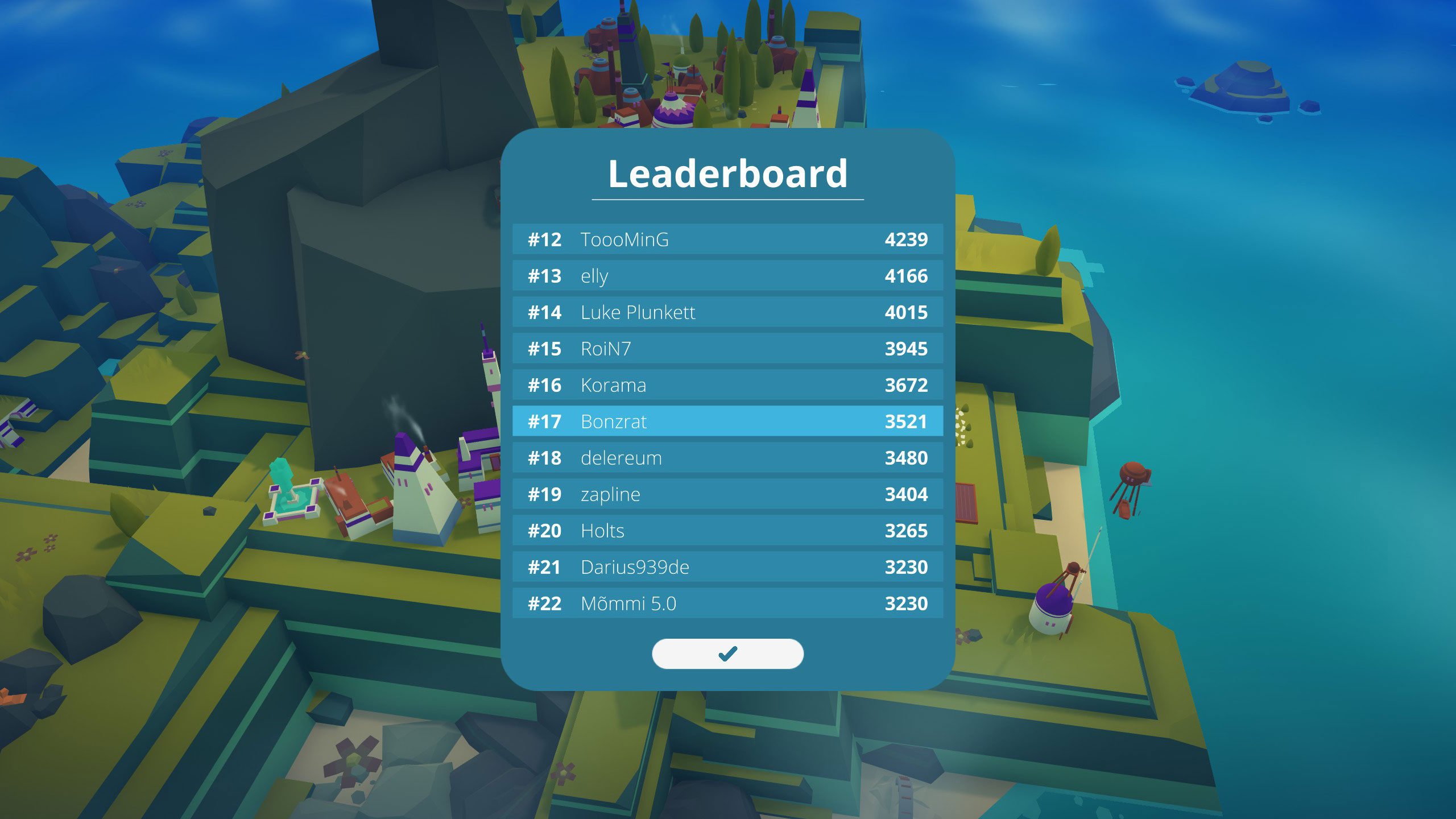 For those who depend upon the unheard lamentations of unseen enemies as a motivator, there is a daily leaderboard, showing your standing in the world of Islanders players. For those who find this stranger-dismaying meaningless, simply doing better than you did last time around is sufficient drive to play again. You know you can do better, because you noticed what landed well and what was squandered in 3-point futility, so now you want to try it again. This is such a deft re-engineering of building tropes, saddling it with a different sense of purpose, and freeing it from the dead-eyed tyranny of money.

Strategies gently emerge, be it planning settlements in such a way that you've left space for a large and points-profitable improvement much later, or realising that some buidlings have unspoken associations, which affects what you're offered come the next milestone. It's all ever so tranquil on the surface, and never once made my cortisone levels spike, but there's a fierce brain throbbing away beneath those sedate low-poly models. 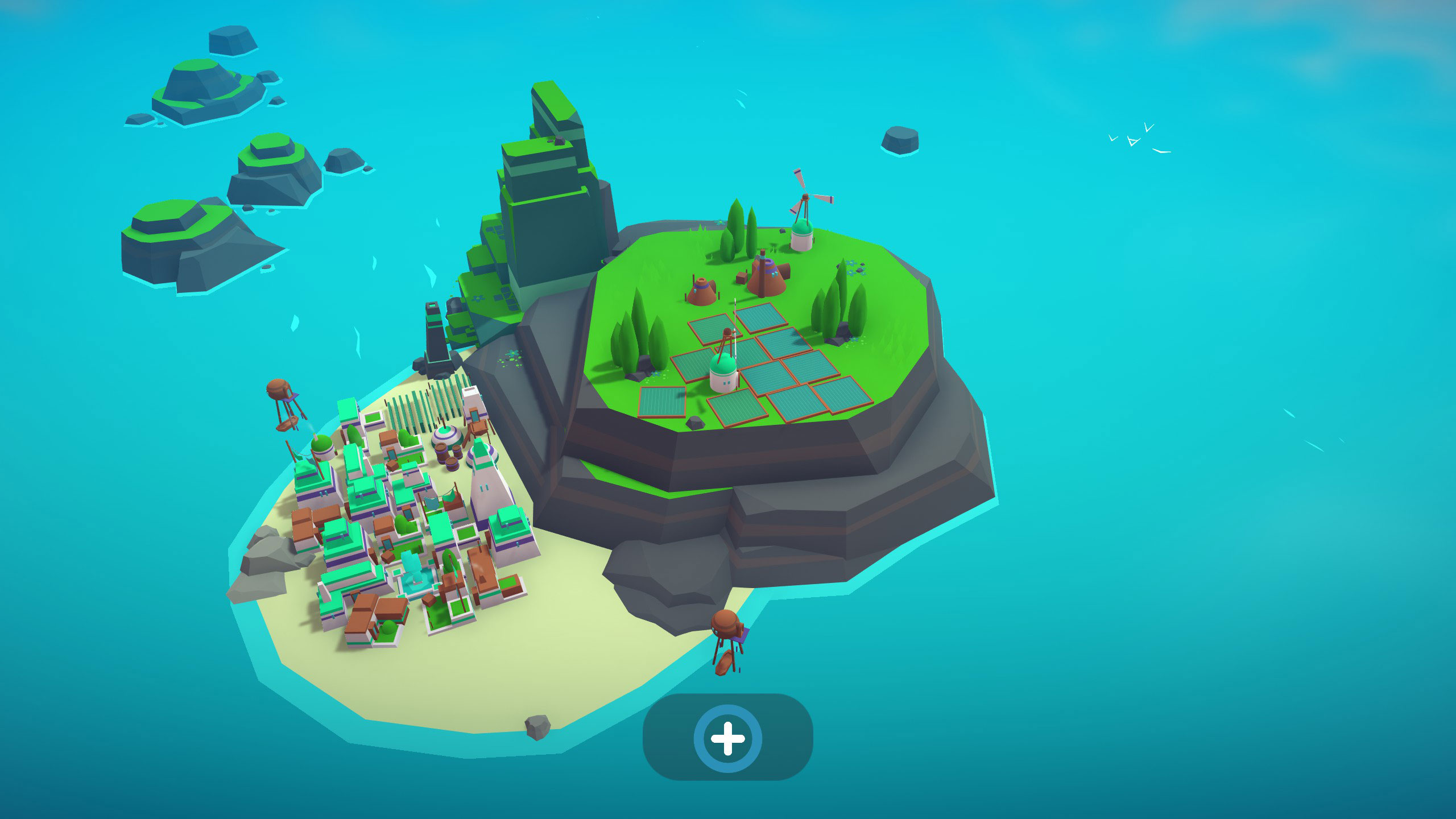 Perhaps because of this, though, it runs short on unpredictability after a few sessions, and becomes all about finesse rather than surprise. I'd be interested in a leaderboardless mode that (somehow) either made everything available from the off or gave me the option to restore a game from before the island I bungled, just to spare me from doing the same starting loops of minor buildings again and again. On the other hand, this would be entirely against the snowballing nature of the game, and as such is an entirely terrible suggestion on my part.

My last review, probably. What a way to go out.

I'm glad it was Islanders, though. Sweet but not too sweet, without a mean bone in its body, a vintage genre given a modern reworking, and a fine sign that PC gaming is, as always, in no danger of resting upon its laurels.