'Winter' has always been a term with two meanings. The crisp, pure return to nature of a snow-settled world, but also the grey death of everything: the wistful dream and the dour reality. Romance, mundanity.

It's Winter, a short vignette about Eastern European apartment blocks, is both of those things. Magic and tedium, wonder and ennui. Real winter, scenes that make your blood temperature drop ten degrees, landscapes that you yearn to be in, a life you immediately feel desperate to escape. 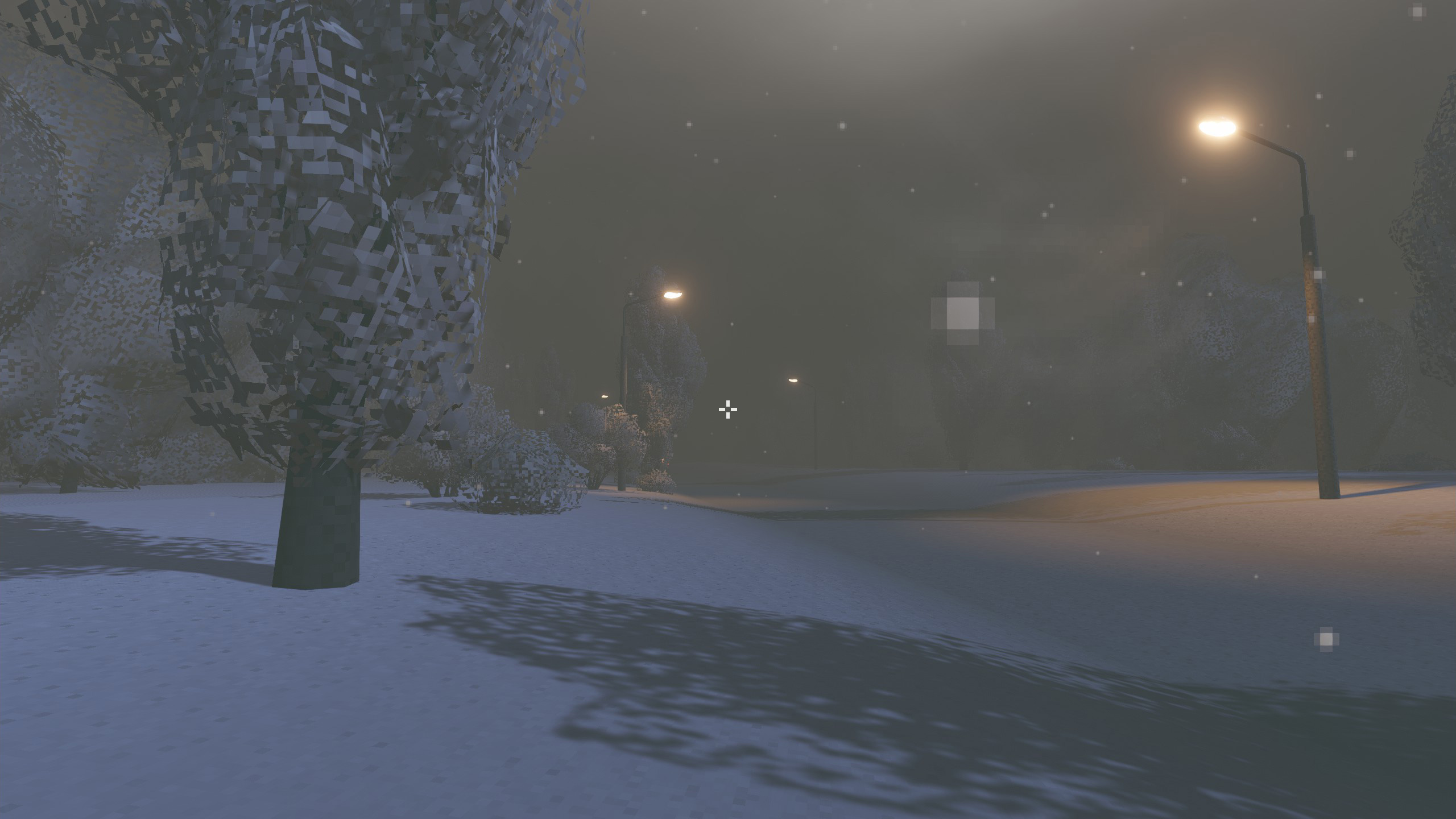 Hopefully that's enough to have already give you a sense of whether you're likely to hate the aimless experience of It's Winter, in which case I respectfully ask that you summarily clear off and leave those of us who are partial to a spot of atmospheric nothingness to it.

It's Winter is very specifically about nothingness - by which I mean, though its blood is rich with walking simulator platelets, it is not about dreamy escapism, but rather about feeling purposeless, even trapped, by one's situation. We all know the feeling: that certain kind of boredom, where it's not that there's nothing to do, but rather that everything feels futile. 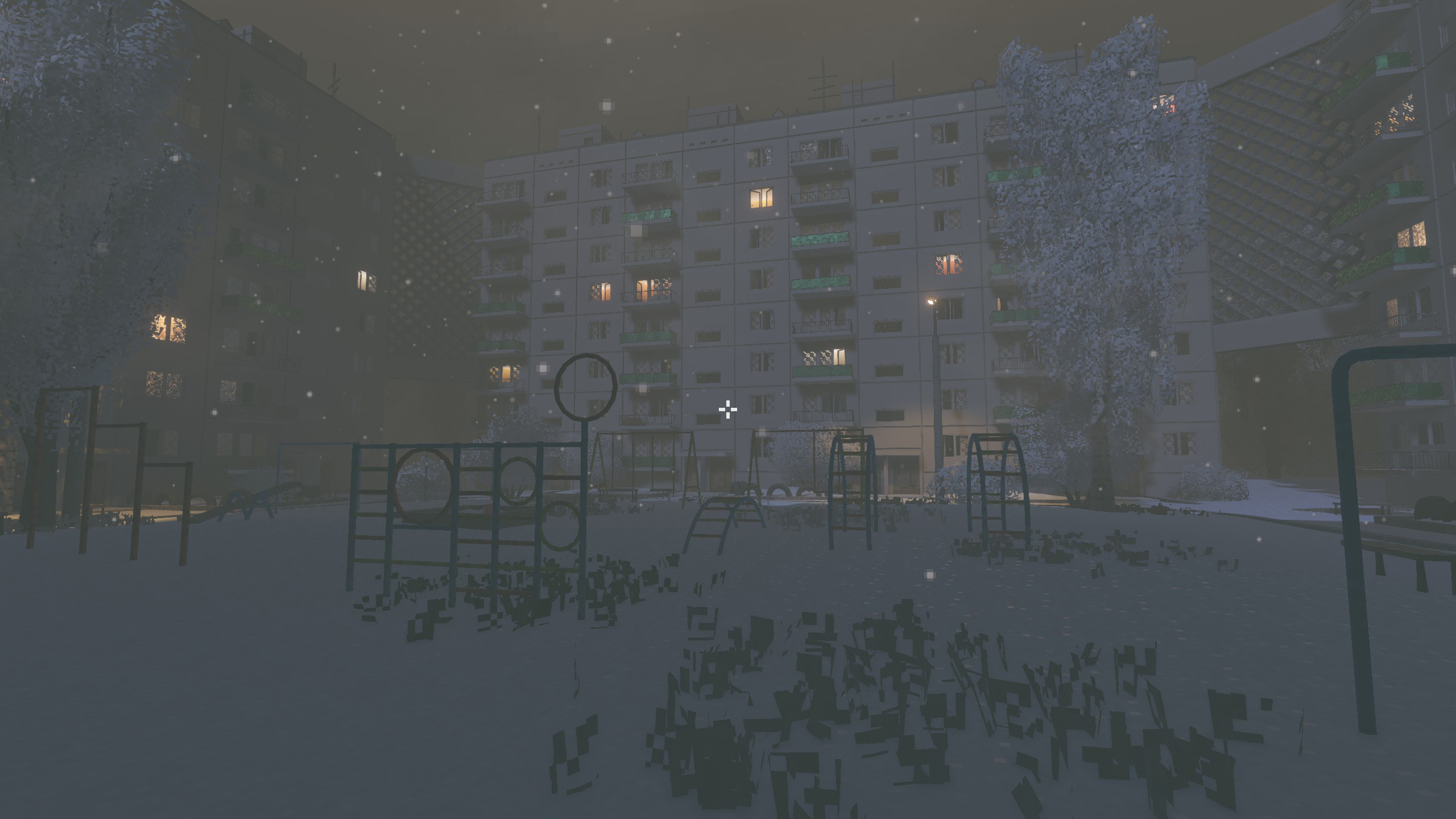 Baby, it's cold outside. Baby, it's always cold outside. A seemingly infinite expanse of snow, broken sporadically by grim, grey apartment blocks, spartan playgrounds that surely haven't heard the laughter of snot-nosed little gits in years, and banks of skeletal trees. It is beautiful, but it is nothing.

It is purgatory, a point enforced by the closest this first-person game has to any other characters, which is patrolling tractors, endlessly shovelling entirely unhelpful paths through the endless snow, a comforting-yet-sinister orange glow emanating from behind their opaque windows. 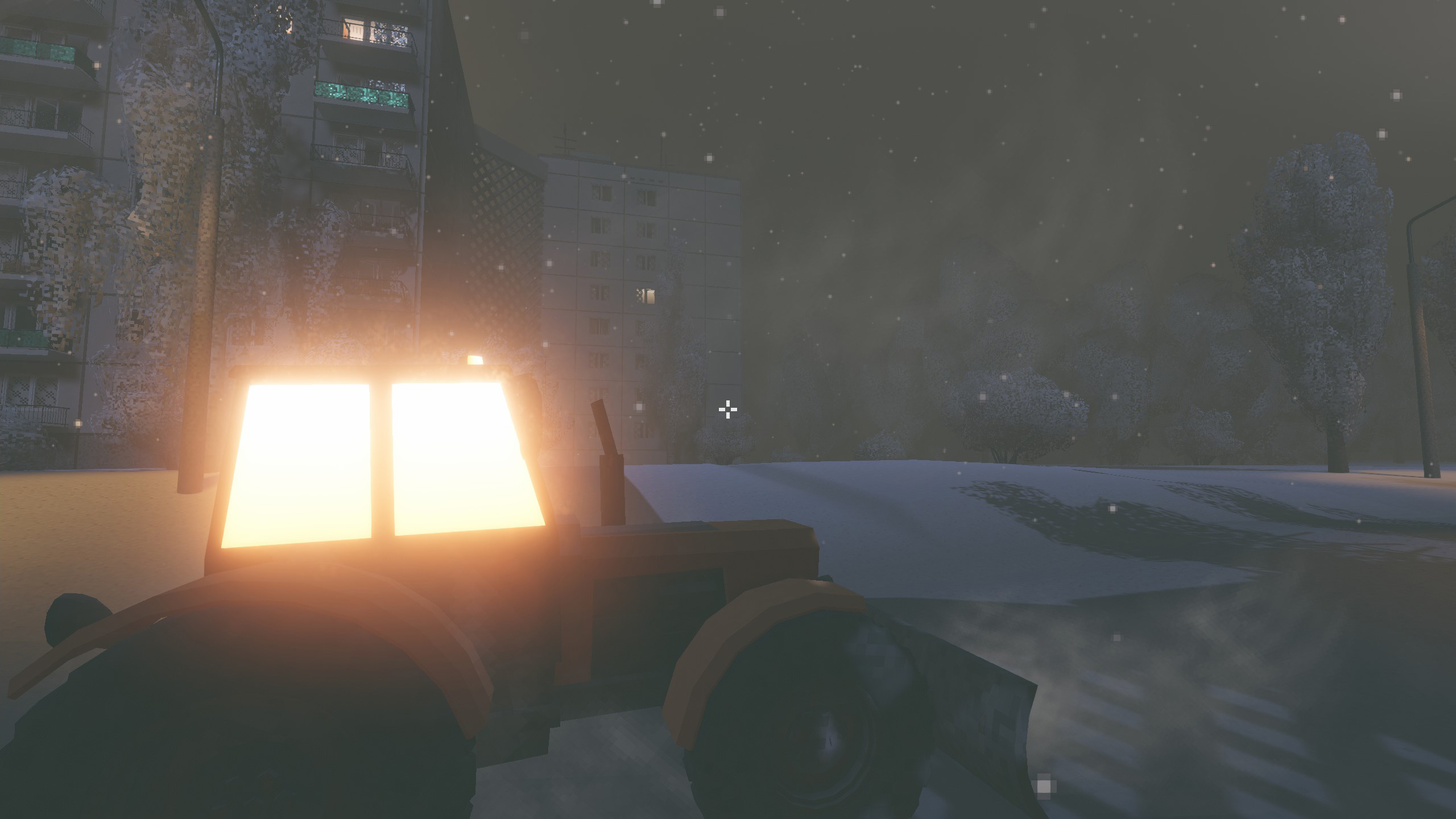 They are, I took it, some manner of warden, keeping me in this unplace, preventing me from disappearing forever into the snow. I walk too far, I come back, never too far from the squat, silent tenements. I don't see them turn me around, but I know they did it. My wardens.

I find the snow magical, yet I feel desperate to escape it, to find some better place on the other side of it. 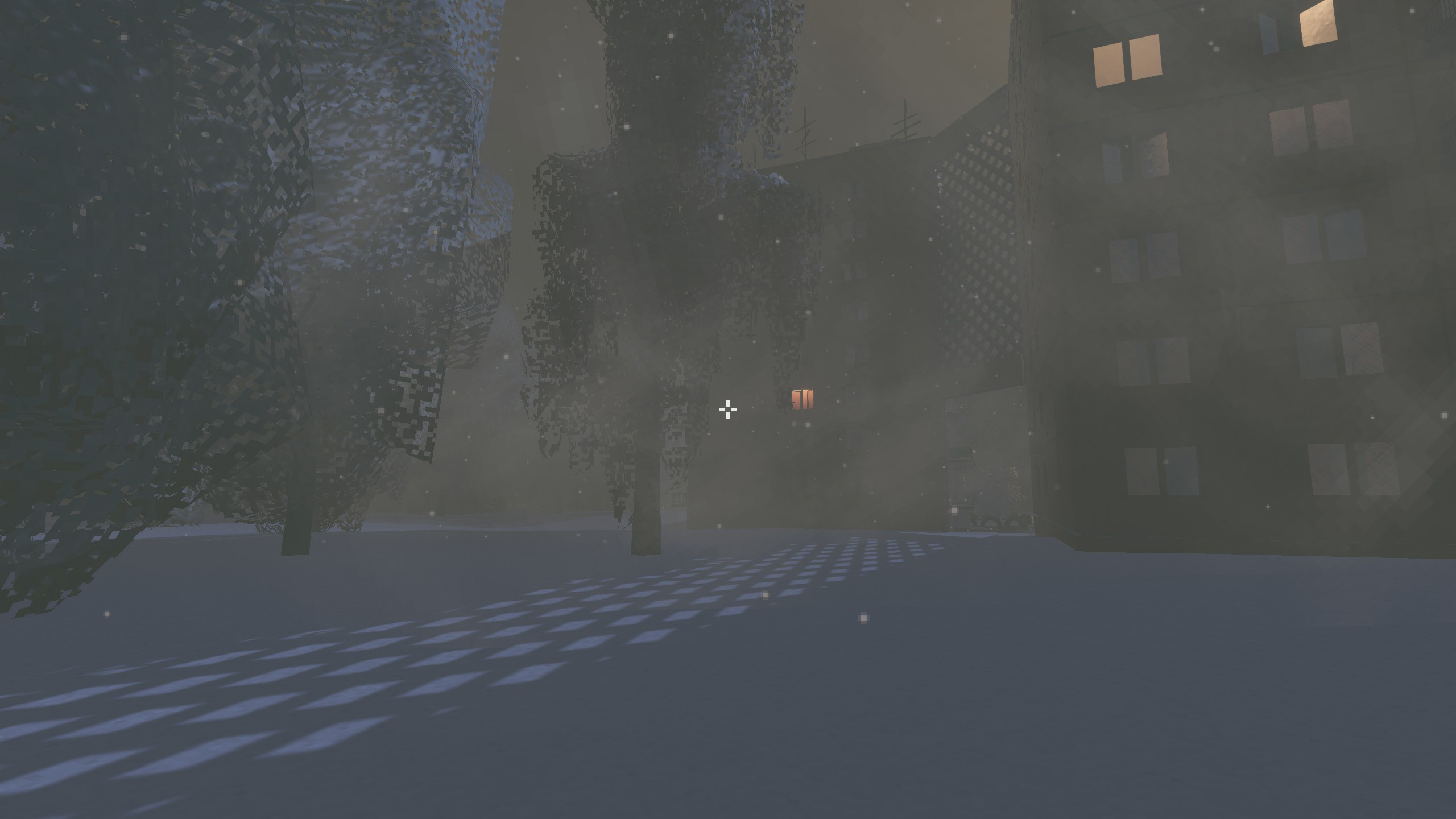 I cannot. I can only, eventually, return home, to my own apartment. Hints of the troubled person I am -- pills and spidery notes-to-self -- and a small collection of remarkably engaging interactive objects. I can microwave the cheese, I can grill the toast, I can pick the glass from the floor of the communal hallway and painstakingly toss it down the garbage chute. 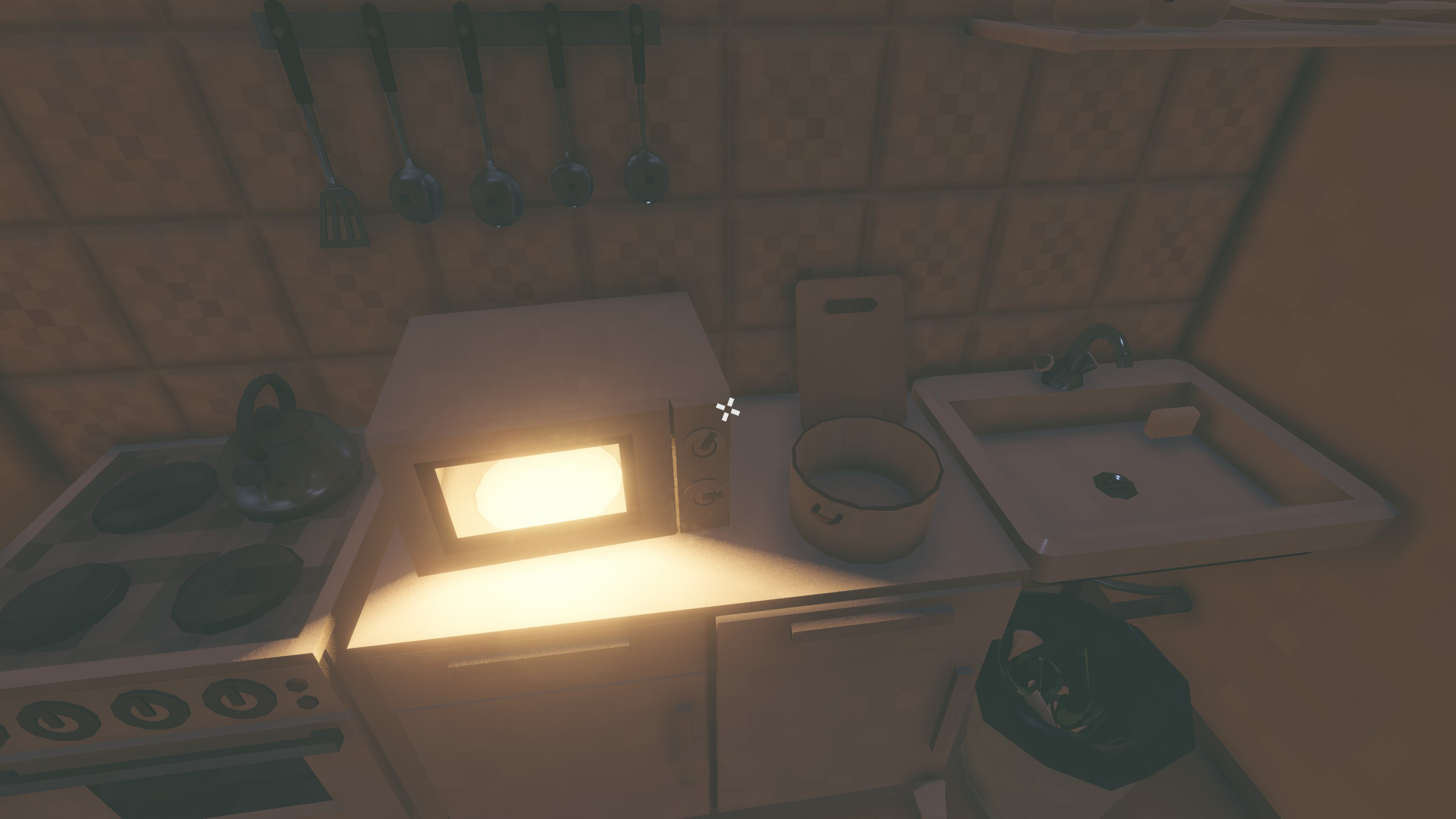 I can keep myself busy doing nothing at all. Waiting for a tomorrow that never comes.

I don't know whether It's Winter is a specific statement of what life, thin and empty life, is like in a grim residence like this, during the hardest months. That's the implication I take, and it's one I value. The otherness, in this case that mingled wonder and oppression, is what I increasingly turn to games for. Give my lizard-brain a rest. 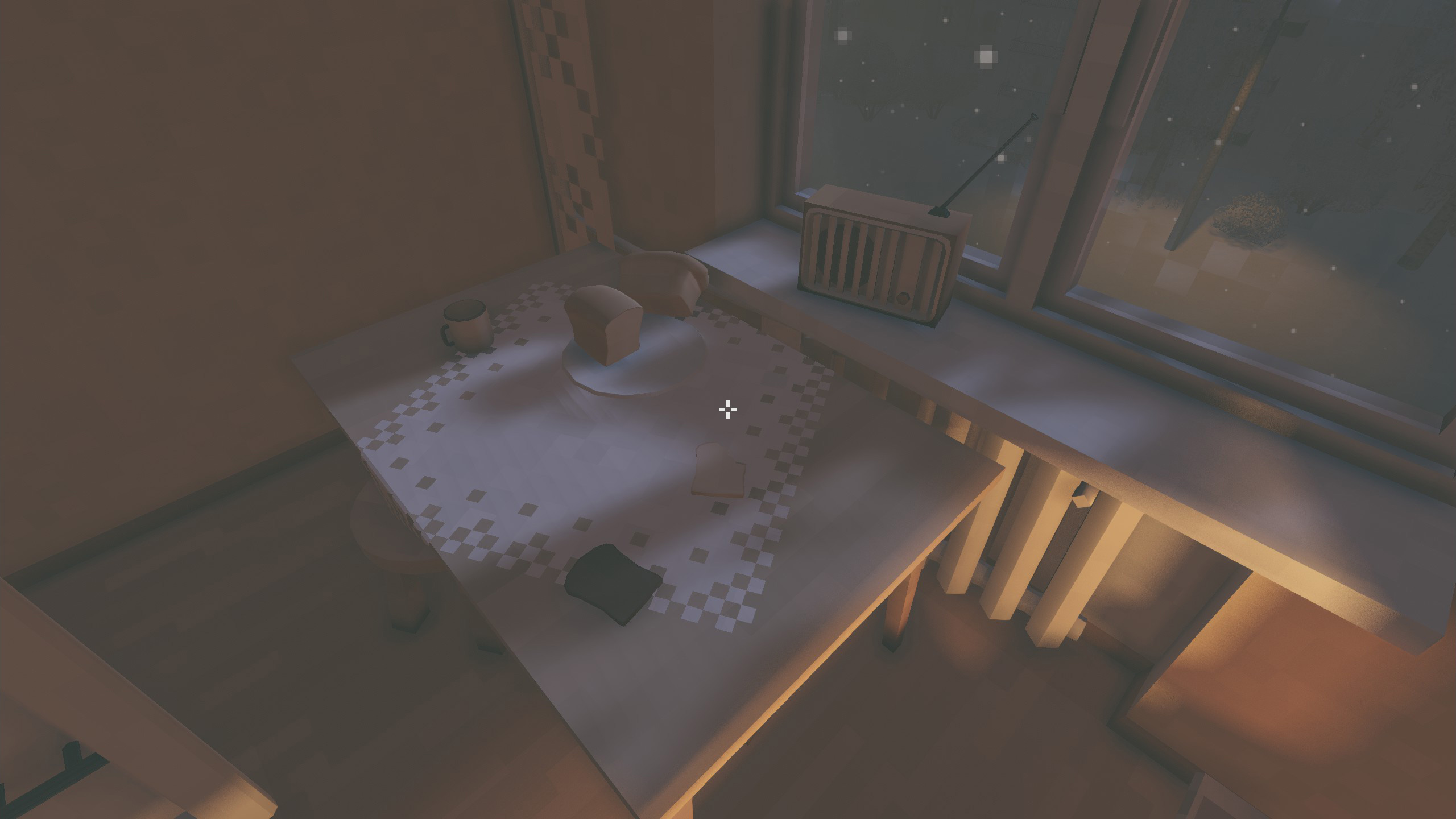 It's Winter is short and without much to 'do', which is clearly a problem for some folks who want to feel they've wrung the most value out of their spending money, but I wouldn't want it more complex and I certainly wouldn't want it longer: that would break the spell. Take too long to pose its questions and it would helplessly begin to answer them. Instead, it leaves that to me.

A live sparkler, abandoned in the snow. No-one around, nowhere they could have run to before that disposable magnesium frippery would have burned itself out.

I will never know its origin. I am glad of that: because of that, the little vision of that sparkler will stay with me for days.

I walk a few lazy circles in the snow, then return home to see what happens when I put a tomato in the microwave. A short while spent in this bad life is good.