"Winter is coming!” yell the tiny minions in At The Gates as they flee, incredibly slowly, back to the safety of their settlement. They don’t actually yell that, but in my head that’s what I imagine they’re shouting as their little health bars tick down underneath the message ‘SUPPLIES EXHAUSTED’. I also imagine them clutching frost-bitten hands to their chests as they trump miserably through the snow, occasionally collapsing from sheer tiredness, the welcome hearth fires of home so close, yet so achingly far.

Sadly, imaginary scenes like this were far more exciting than the actual process of playing the game. But I’m getting ahead of myself.

Jon Shafer was the lead designer on Civilization V, and he’s been quietly toiling away on the Kickstarted At The Gates for years. In a touch that made me smile, the full name of the game is actually Jon Shafer’s At The Gates, revealing not only personal pride in this pet project, but also sticking one in the eye of Sid Meier. “Eat that, Sid!” I imagine Jon, yelling into the night, shaking his fist at trees. “You’re not the only one who gets to have his name in the title!” 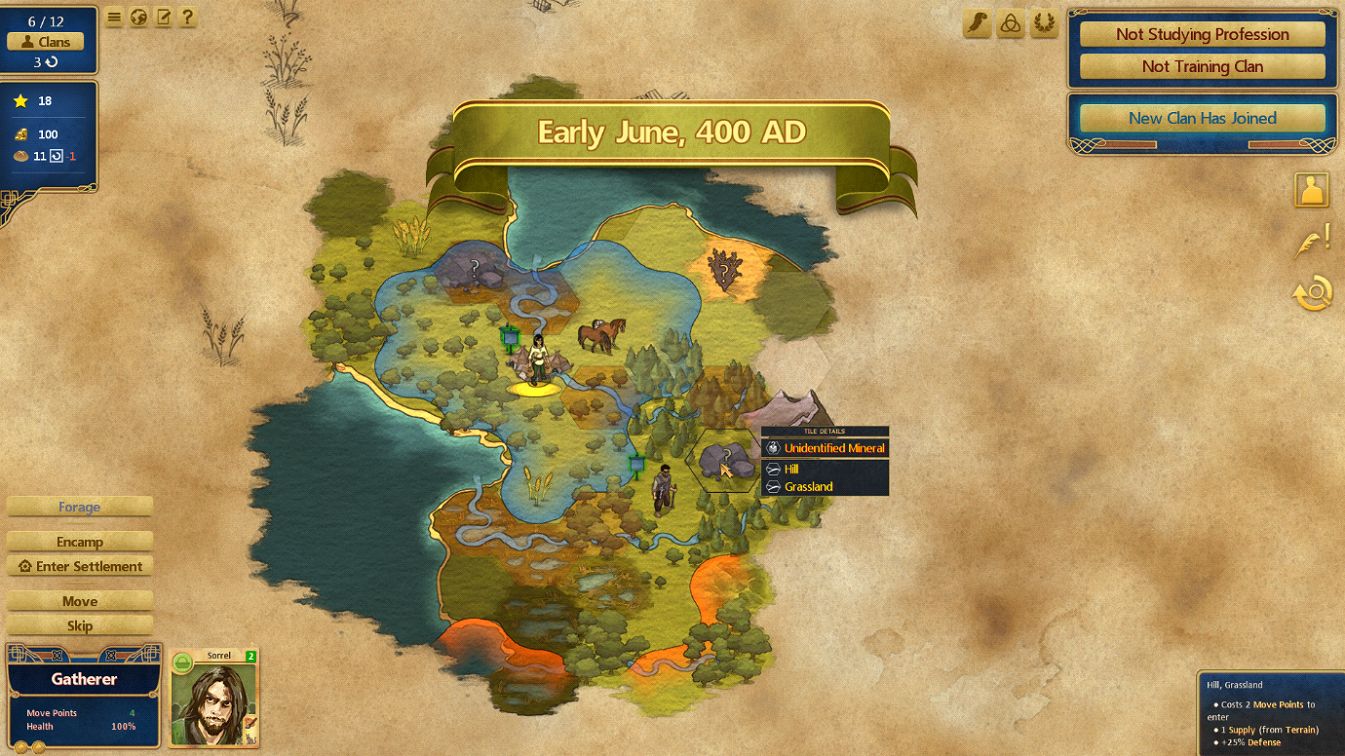 Jon’s lovingly crafted 4X strategy game takes the world-spanning ethos of Civilization and focuses it down to a more human level of collecting wood and picking berries. In that sense it shares a lot of DNA with The Settlers, albeit with a turn-based structure rather than real-time shenanigans. Your tribe is plonked onto a procedurally generated landscape circa 400 AD, with the goal of taking down the mighty Roman Empire. But that goal is a long way off. No, let me correct that, it’s a looooooooooong way off. That’s more like it.

A cheerful note from Jon in the review build warns “At The Gates is a hard, slow game”, and he’s certainly not kidding about the slow part. Each turn takes roughly half a month, and you’re very limited in what you can do in that time. You start with three clans, each represented by a chunky figure that towers over the landscape, and you can move each of them up to three hexes – as long as they’re not going over hills or streams, in which case their movement is reduced. 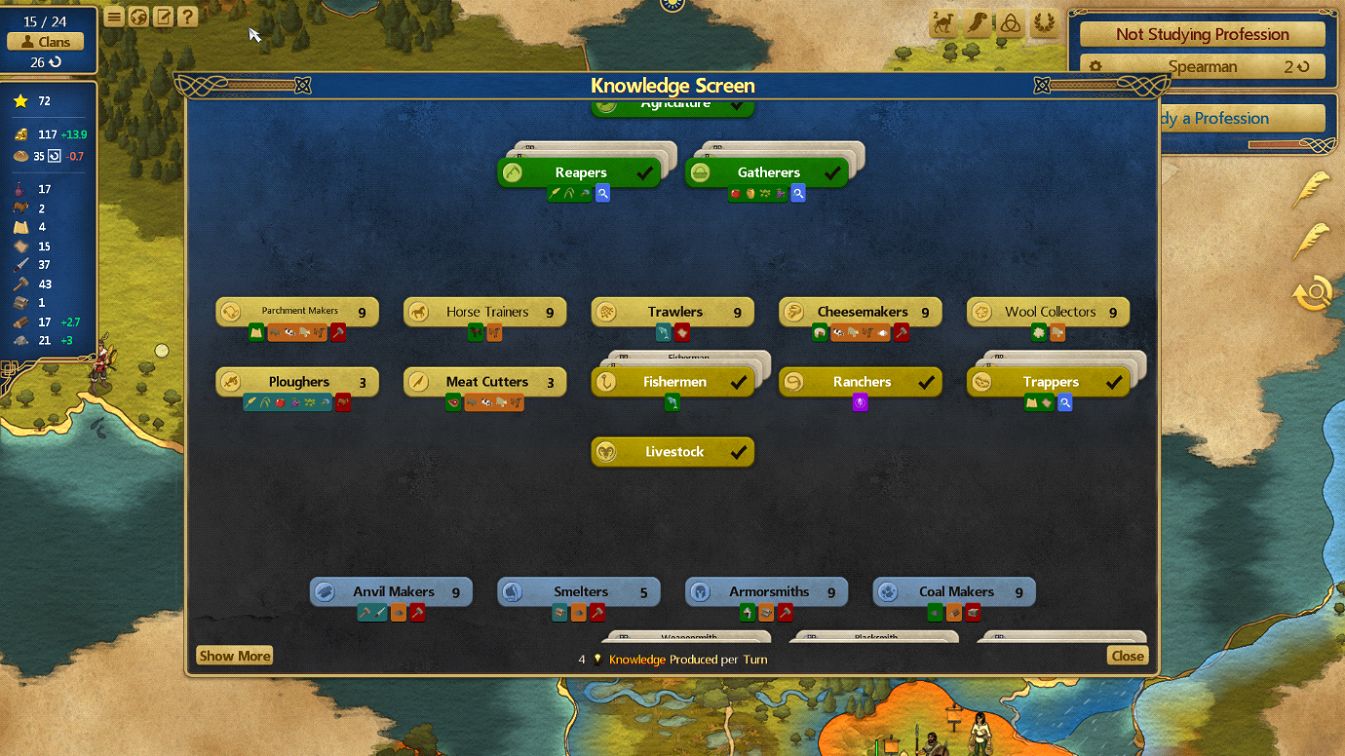 You can also study a profession – or in other words, unlock branches of the tech tree. The base-level professions, like Gatherer or Hunter, only take one turn to unlock, but the top branches can take up to 25 turns to research – and you can only research one profession at a time. Similarly, you can train one clan per turn in either a profession or discipline. The higher the clan’s discipline level, the quicker it is for them to train in a related profession. So for example, it might normally take five turns to train a Farmer, but if your clan has a couple of discipline levels in Agriculture, it might only take three. However, if you want to switch your clan’s discipline later on, say from Agriculture to Metalworking, their discipline level goes back to one.

Because you can only train one clan, only research one profession at a time, it takes an absolute age to get anything done. I was three hours into my first game before I even contemplated building a farm, for example. This isn’t helped by the clans’ painfully slow movement. On one occasion my Explorer spotted a fruit bush on the outskirts of my map, and it took nearly two in-game months for my Gatherer to reach it and start picking. And if you stumble across an ‘unidentified’ resource, it takes four turns to ‘identify’ it, which just seems like a needless waste of everyone’s time. I pictured my Gatherer stood staring at an ‘unidentified plant’ for weeks, scratching her head and rubbing her chin, occasionally breathing in sharply through her teeth. 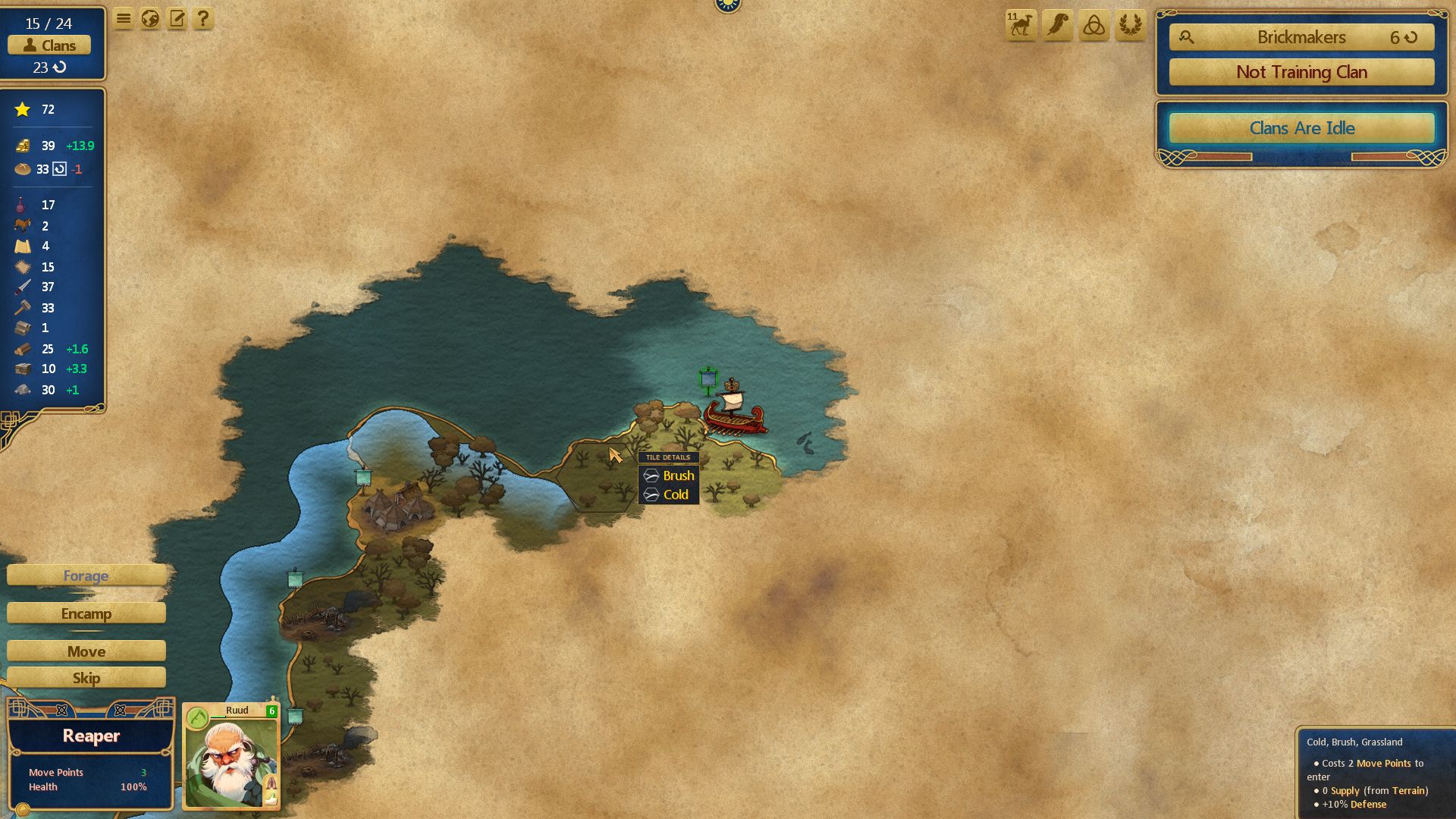 Then there’s the fact that when winter arrives, almost everything stops. I actually like this. The cold snap has a big impact, so crop-harvesting ceases, and exposed clans either have to rush back to the safety of the settlement or ‘encamp’ where they are to preserve their health and eke out their survival on dwindling supplies. It’s imperative to have enough food stored up to see your tribe through the winter, otherwise you’ll have to rely on rare visits from the goods caravan to buy fresh supplies. But this seasonal halt to proceedings does tend to make an already slow game even slower. 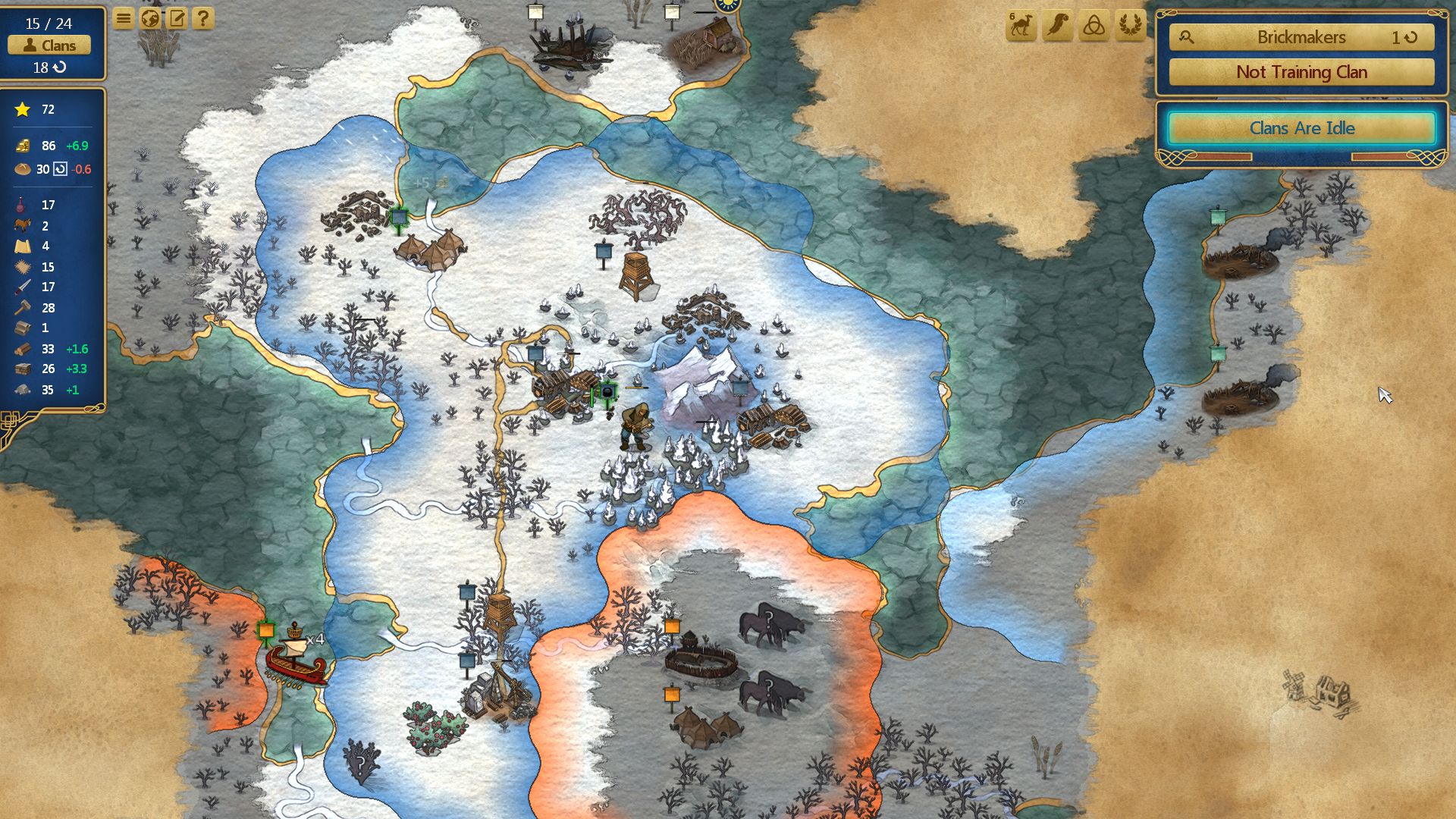 Resources are very limited, in keeping with the hardship of the Dark Ages, I suppose. But you’re also limited in the number of clans you can have. Clans arrive every few turns in accordance with the ‘fame’ level of your settlement, but the maximum number is 40. So even if you manage to unlock all of the jobs on the extensive tech tree, which range from Miner to Archer to (my personal favourite) Ale Maker, you’re only going to have enough people to do a handful of jobs. This means you need to retrain clans in different professions as the game goes on. But retraining also means plodding the clan in question all the way back to your settlement first. And you can only have one settlement, so that trip might be a very long one indeed. OH MY GOD IT TAKES SO LONG TO DO ANYTHING IN THIS GAME.

If you want to have any hope of taking down the other tribes across the map, a big chunk of your clans will be in the army. Yet in contrast to the amount of time it takes to train soldiers, combat is brutally swift. It took me several in-game months to assemble my first band of warriors, yet when I sent them out against a rival, they were wiped out in one turn. As you can imagine, my howls of frustration were plaintive. 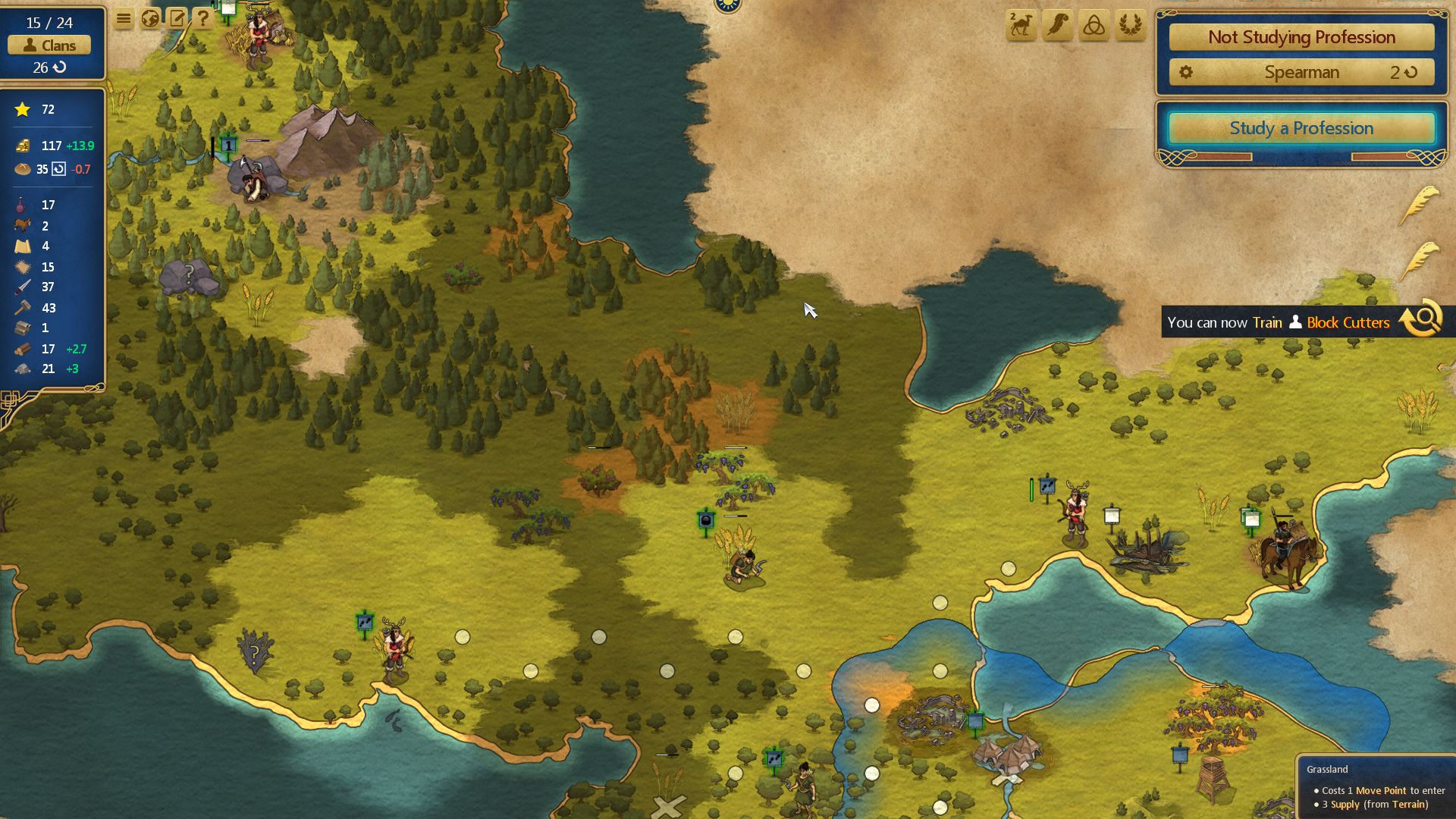 At The Gates has an impressively complicated set of interlocking systems, but the amount of time and patience it takes to actually get anywhere is ridiculous. Civilization is hardly a rip-roaring roller-coaster ride, but the key difference is that your decisions in Civilization feel momentous. By contrast, At The Gates feels like a slow war of attrition against mundanity. Rather than making decisions like ‘Should I press on and take territory from Gandhi’s empire or concentrate on building my naval fleet?’, you’re faced with choices such as ‘Should I go and see what that bush is over there or explore a bit further to find some cows?’.