An apparent whoopsie on Steam has revealed the existence of Just Cause 4, in an advert, without anyone having announced any such game. So that'll probably be something Square Enix plan to announce during their E3 press event on Monday. The ad is a simple picture which doesn't reveal much but all I need to know is: our fella still has a wrist-mounted grappling hook; he's still outside somewhere pretty; he still has guns; he still has a grenade launcher on a gun. Aye that'll be Just Cause alright, more open-world sandbox shoot-o-grapple-a-destruction.

As Kotaku noted (and tweeter "Wario64" shared a direct link to), the ad was in one of Steam's pop-up notifications. The pop-up seems to have been pulled from the rotation, but the image is still up. 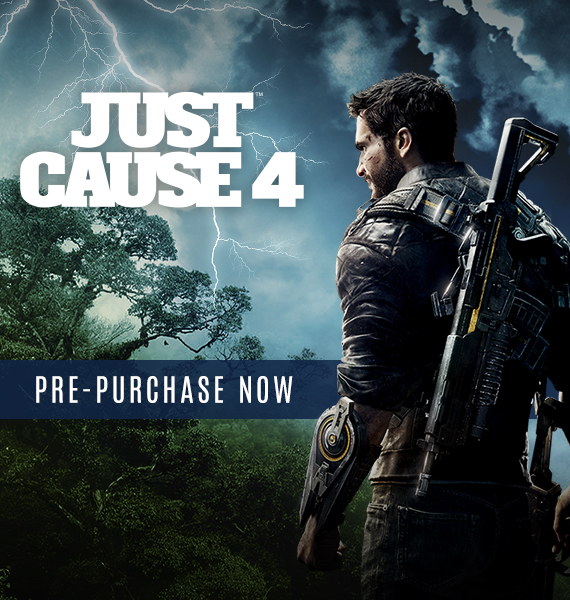 Square Enix's E3 showcase will start at 6pm (10am Pacific) on Monday the 11th. That'll likely be when they actually announce Just Cause 4. I'm sure they'll also show more of Shadow Of The Tomb Raider, and I'm hoping we might hear from Dontnod's next Life Is Strange, maybe even their Marvel games.

My hopes for Just Cause 4 are simple: fewer and better escort missions; better (or at least even more ignorable) story; a less empty world; bigger explosions; multiplayer not left to modders; a grappling hook powerful enough to pull the Moon down to Earth. It'll be building on some fine foundations.

"It's a triumph of a game despite some flaws, and certainly one of my peak gaming moments of 2015," our John wrote in his Just Cause 3 review. "Bright, cheerful, ridiculous, and most of all, absolutely determined to ensure you have fun."

Presumably Avalanche Studios are making this one too, and Square Enix will publish again. Avalanche are awfully busy at the moment, with Rage 2 and Swedish open-world robo-buster Generation Zero both announced in the past month. Oh, and they're now opened by a film company too.