Ken Follett's The Pillars of the Earth [official site] is a book which passed me by, even though I've devoured historical novels which must have been sitting mere inches away on the shelves of the library. The action of the story orbits the building of a cathedral in the town of Kingsbridge in 12th century England. My experience of the story comes solely from Daedelic's conversion of the novel into a point-and-click adventure, taking you through intertwining stories from church and state, and allowing you to bend your own pathway a little as you explore the gorgeous and evocative environments.

The first seven chapters of the story comprise a first book of sorts and are now out with two more sets to follow as part of a season pass deal. Here's Wot I Think so far! 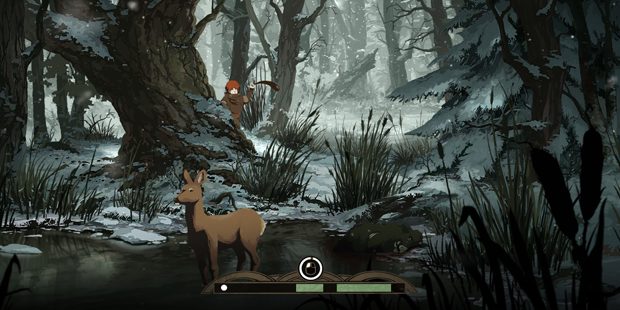 In this point and click the story moves between the point of view of the monk, Philip of Gwynedd, the master builder Tom, and a child Tom meets up with called Jack, who lives with his mother in the forest at the start of the tale. Most of the time you're doing traditional point and clicking, although it has been streamlined in some nice ways. Along the way there are a few points where you get some light rhythm action minigames to see whether you execute an action well or muck it up. They're not about gating progress, but about giving you another way to make a choice which felt pleasantly tabletop RPG-ish.

The first thing which struck me was the artwork. You start in a bitter winter and the palette is a similar one to that of The Banner Saga, or the Winterfell parts of Game of Thrones – you know the one – dingy with that thin, cold light which makes the greys greyer. Even though games often revel in muddy colours, they don't often go full winter as it's such an unwelcoming and depressing look, and its novelty makes it peculiarly refreshing.

As I made my way through the first seven chapters there's a gradual lightening and brightening as time passes but I ended up turning the brightness up early just to help with the visibility. It was a curious moment as I found myself conflicted over whether to do so – continuing in low light was uncomfortable, but it was also part of reminding me that this was a 12th century midwinter, so what light was I expecting? 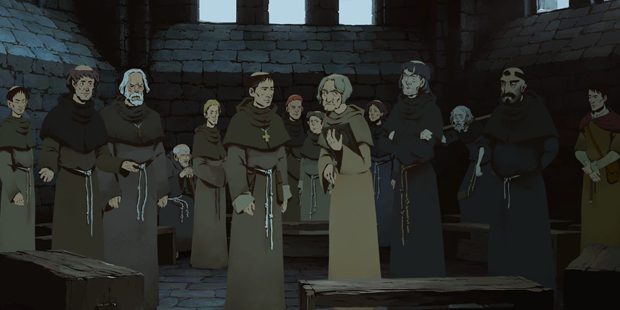 That awareness of being in a very different historical period was a recurring feature. I have a working knowledge of cathedral architecture because of my undergraduate degree and The Pillars of the Earth has more than a few scenes which breathe life into that knowledge, tying the end result to a struggle for construction resources, a need for patience because the whole thing takes decades (sometimes even centuries), and fleshing out what these buildings were intended to actually DO for the lives of the people of the see. Sometimes The Pillars of the Earth gets clunky on that front, though, with Tom veering from "enthusiastic craftsman" into "pedagogue" while chatting with his kids about building. It's not terrible, just a bit awkward.

The sense of being set at a particular time isn't just confined to cathedral architecture – there's a sense of religion's function within the society and the general unrest during the Anarchy. Most obviously, those aspects of 12th century life are expressed in terms of the variety of people who have taken religious orders and the various allegiances you uncover as you talk with them. You also get repeated reminders of the brutality of life, the position of women - or indeed anyone considered not powerful in society (and brutality/power dynamics/sexual assault around that), the sin attached to kinds of sexuality and living outside marriage and so on.

Chatting with Adam (who read the book a million years ago and played snippets of the game earlier this year) we agreed that there's sometimes a thin line between an admirable exploration of the cruelties that arise within a setting, historical or otherwise, and a shift into unrelenting grimness. Along with the wintry palette, the treading of that line is another way in which the show reminds me of Game of Thrones. There’s enough in common in terms of tone and the positioning of women and other disempowered people that, as with Martin's books and the TV show, I’m a bit wary of how this game is going to play out on that front. That said, through mine and Adam's conversation it seems like the game definitely has its own voice and that the writing team seem to be approaching critiques of the source material thoughtfully so it's wariness tempered with hope.

Something which was curious to me as a newcomer to Follett's world was that the game feels both light and heavy when it comes to the story. I made my way through the seven chapters in a few hours (probably an afternoon, if I hadn't been taking breaks for other work tasks) and I never felt lost or overwhelmed. In fact I was surprised at the speedy pace! On the other hand a few things which happened and which my characters would find out about through letters seemed incredibly dense in terms of information and were hard to weave into the story playing out in front of me given they involved people who only got passing mentions in the dialogue. It's not a big thing, but occasionally I would gloss over a letter thinking it was setting the scene and then find myself a little confused in a conversation, or uncertain about the choice I was making. Overall I'd say the effect is a positive one because it gives you the impression that the world is built on these hefty foundations and it helps give the sense of a fully realised setting without battering you with lore/historical documents. 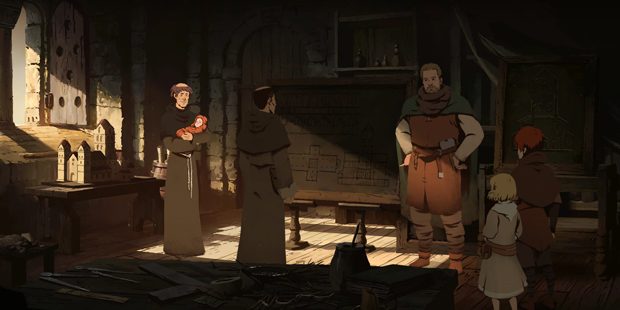 I also want to note the streamlining in Daedelic's interface. I really appreciated that you never have too many items to keep track of, all visible by glancing at the bottom of the screen, nor do you ever have a list of more than about three tasks. There's a chance some people might find that a bit on-rails-y but for me it helped with keeping the story moving.

There's an neat twist on the 'look' verb as well. When you right click an object, instead of getting a visual description, you hear related thoughts from the character you're currently controlling - sometimes those are just an assortment which give you a sense of how the character relates to the world and its inhabitants, but other times it's used really effectively to communicate fear or urgency, just showing you the same thought over and over again. You can also use your bible on objects and people when playing as Philip of Gwynedd, and this often yields a relevant snippet of scripture, which is a nice touch.

You get to make choices about how the characters act and there seem to be actual consequences to those actions, but I have no idea how much is illusory or superficial given the game would need to follow the basic major plot beats of the novel. For example, I definitely got a novice into trouble in my playthrough by choosing to report his misdemeanours. There was a consequence to that action for him in that he got punished but I'm less clear about whether that affects anything beyond how I relate to the characters involved. It might have altered how a particular meeting played out in terms of the opinions of the monks (although I think that meeting ended up playing out a particular way regardless because "story") or it might come back to bite me in a later set of chapters but I'm not sure how much is flavouring and how much is me doing any of the steering here. 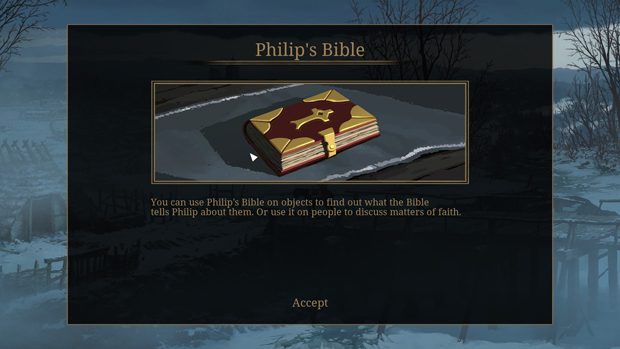 Before I finish I'm just going to go back to the strand of sexual violence in the story which I mentioned in passing a few paragraphs up. The game has a 16+ PEGI rating which didn't exactly surprise me because I've read similar historical novels that don't shy away from cruelty and suffering. As the game's rating isn't explicitly given on its Steam page, the art style and a sense that it might be a lighter period piece might wrongfoot some people, especially those not familiar with the sort of grim historical or semi-historical style.

PEGI give their reasoning for the rating as "Realistic looking violence - Strong language" but for me that doesn't impart information about sexual violence. The sexual violence in this game is verbally rather than visually explicit, but that doesn't make its impact any less forceful. Reading the PEGI description I don't think I would have been able to accurately gauge the strength of that particular content so I wanted to make sure I gave a clear "this is a thing which is strongly present in this game" note in case that influences either you buying it for yourself or buying it for others. I'd need to see more of how it plays out across later chapters to know if it's making a more interesting point than just underscoring brutality or painting a character as an awful person through that violence, though.

In terms of where this opening salvo of game leaves me, I'm interested to see how some of the characters progress and wary of others. The latter is because some of the jerks are so clearly going to take their douchebaggery too far and I don't trust historical novels to give people their comeuppance! In terms of where I'm the most emotionally invested, though, I'd say it's actually in the fate of the cathedral. They're so complicated and prone to expense/disaster/overrunning/all of the above and I really want to know if this one is ever completed!

All of the above bodes well for my interest in future instalments BUT it also raises a question. The game is not complete but the book is so... do I buy and read the actual book or not? ARGH!

The Pillars of the Earth: Book One is out now, with two further releases coming in December and early 2018. It's available via Steam for Windows, Mac and Linux, and is bought as a full season for £26.99.