If you click on a link and make a purchase we may receive a small commission. Read our editorial policy.
Premature Evaluation is the weekly column in which Steve Hogarty explores the wilds of early access. This week he has a go building a little fantasy colony in King Under The Mountain.

Playing early access games is like being flung backwards in time to a proterozoic era of Earth’s formless prehistory, where instead of lush continents and breathable air there are surging oceans of molten rock and noxious clouds of superheated nitrogen gas. And you’re there on this unfinished planet, standing on the precipice of a furious lake of spitting magma, your eyes popping like overboiled eggs in the acrid atmosphere, your lungs liquifying in your chest, your skin blistering and peeling off in the unbearable heat, and you think, “You know what I could go for right now? a nice piece of melon.”

But of course, there is no melon here in the year one billion BC, because melons haven’t been invented yet. Not even the less good kinds of melon, like cantaloupes or honeydews. To have melons you have to evolve some trees first, and probably bees too, and the closest thing to a tree or a bee in this ancient time is a hot puddle of green sludge with some big ideas. Yet there you stand, Johnny-Come-Early-Access, cursed with the knowledge of what a melon is and how one tastes, but with absolutely no way to enjoy one besides waiting around for a few hundred thousand millennia until nature gets its act together.

King Under The Mountain is a colony management simulator in the vein of Dwarf Fortress and Rimworld, and with the art stylings of Prison Architect. It is, as you might have already guessed from the needlessly convoluted analogy I’ve deployed, super-duper early-on in development. It is primordial, like the aforementioned green sludge, a sort of functional nubbin of a demo in which you can carve out lodgings for your dwarves and try to keep them from starvation or madness for as long as possible. Everything that will one day make this game unique and beautiful and strange lies in its future, along a winding and ambitious development roadmap. These are early days, the melons are a long way off, and your $20 doesn’t buy you much more than a handful of soil and a pocketful of promises. 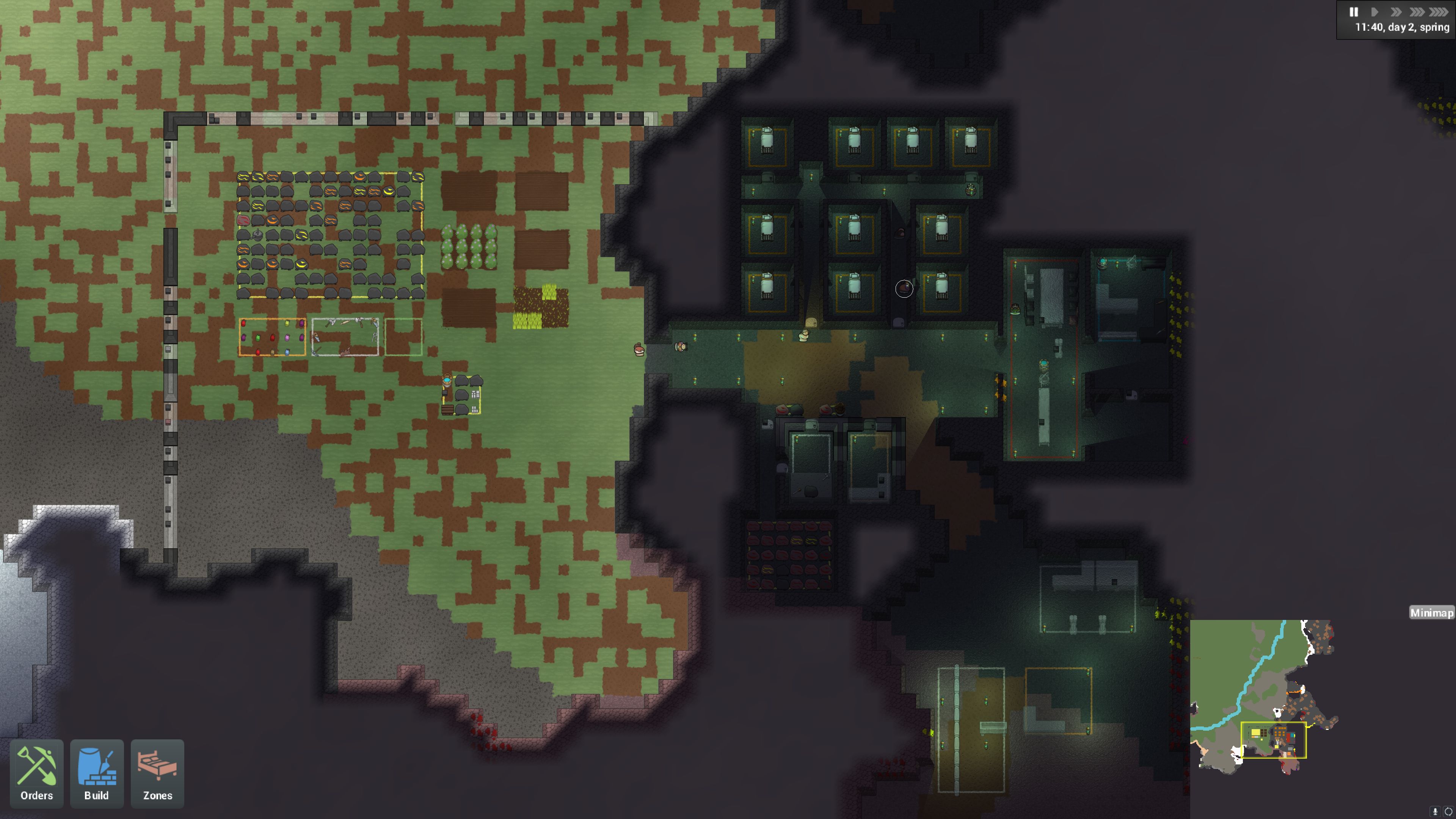 What’s already here will be familiar if you’ve played either of the games that inspired it. You are the overseer of a new settlement of plucky dwarven pioneers, and must designate tasks to ensure its ongoing survival. Zone out areas of the mountain to be mined, create stockpiles for all the rubble and assorted junk to be piled into, open and furnish workshops for masonry and woodworking tasks, harvest some mushrooms for soup, farm some crops if you’re feeling fancy. The idea is to carve out all of the various facilities and accomodation needed to create a self-sustaining subterranean settlement -- the tiny dwarven brains of your burgeoning civilisation can mostly look after themselves once they’ve got the things they need -- before new migrants are attracted to the wealth and status of your town and you’re pressed to expand further and further into the mountain.

Like Dwarf Fortress and Rimworld, the simulation is meticulously physical. Order a door to be constructed, for example, and the object doesn’t simply spring into existence at the end of a progress bar. Instead, logistics happens. An idle dwarf will assign themselves to the task of hauling the required raw stone or wood across the fortress and to an open workstation, before chiselling or chopping it into the appropriate material block, after which it will be carried to the site to be installed.

Every piece of furniture, every wall and bridge, is built in this way. The endless torrent of debris produced by your expanding town is constantly repurposed and repositioned by a milling army of capricious drones, like you’re in command of an industrious ant farm, or a Victorian-era quarry before labour laws. It is both arduous and compelling. One of the gentler pleasures of Dwarf Fortress was watching how your fortress would become characterised by the type of rock it was carved into, how its tables and chairs were all hewn from whichever igneous seam your miners most recently struck. Even this early on in development, King Under The Mountain ticks some of those same boxes. 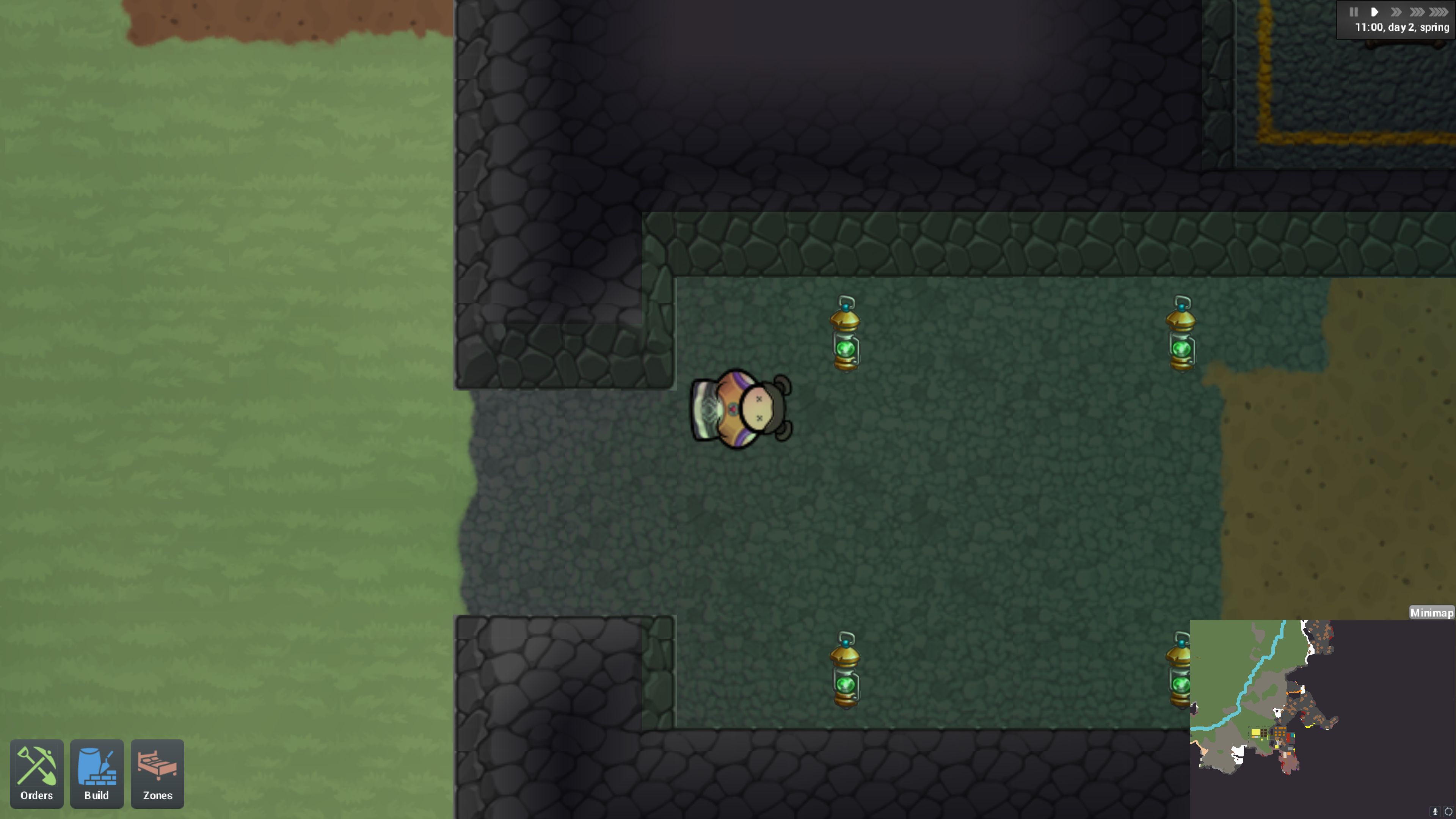 Large parts of this scant alpha version don’t quite work as you’d expect, and as there’s no tutorial or guides to speak of, absolutely none of it is explained to the player. There are no management screens to take stock of what everybody is up to and how much stuff you own, or a way to fine-tune which materials should be stockpiled where, or even most of the basic features you’d expect of a colony sim: smelting, brewing, wildlife, combat, trading, machinery, and erm, ceilings.

My dwarves would also gradually starve to death over time, usually because I’d placed a cauldron in the wrong spot in the feasting hall, but sometimes for reasons unknown. And once one hungry dwarf drops dead, others will shortly lose their minds, the sight of a corpse sending them into a hopeless melancholy, a downwards spiral that puts them off their soup rations and eventually drags them to their own doom.

Once that happens, the whole settlement tends to fall like hairy dominoes. It’s an entertaining quirk of how the game’s inscrutable dwarven brains are currently tuned, rather than a bug. It’s how I imagine owning a home aquarium worked in the pre-internet days, before you could search for “BETTA FISH DISEASED WHAT NOW” on Google. 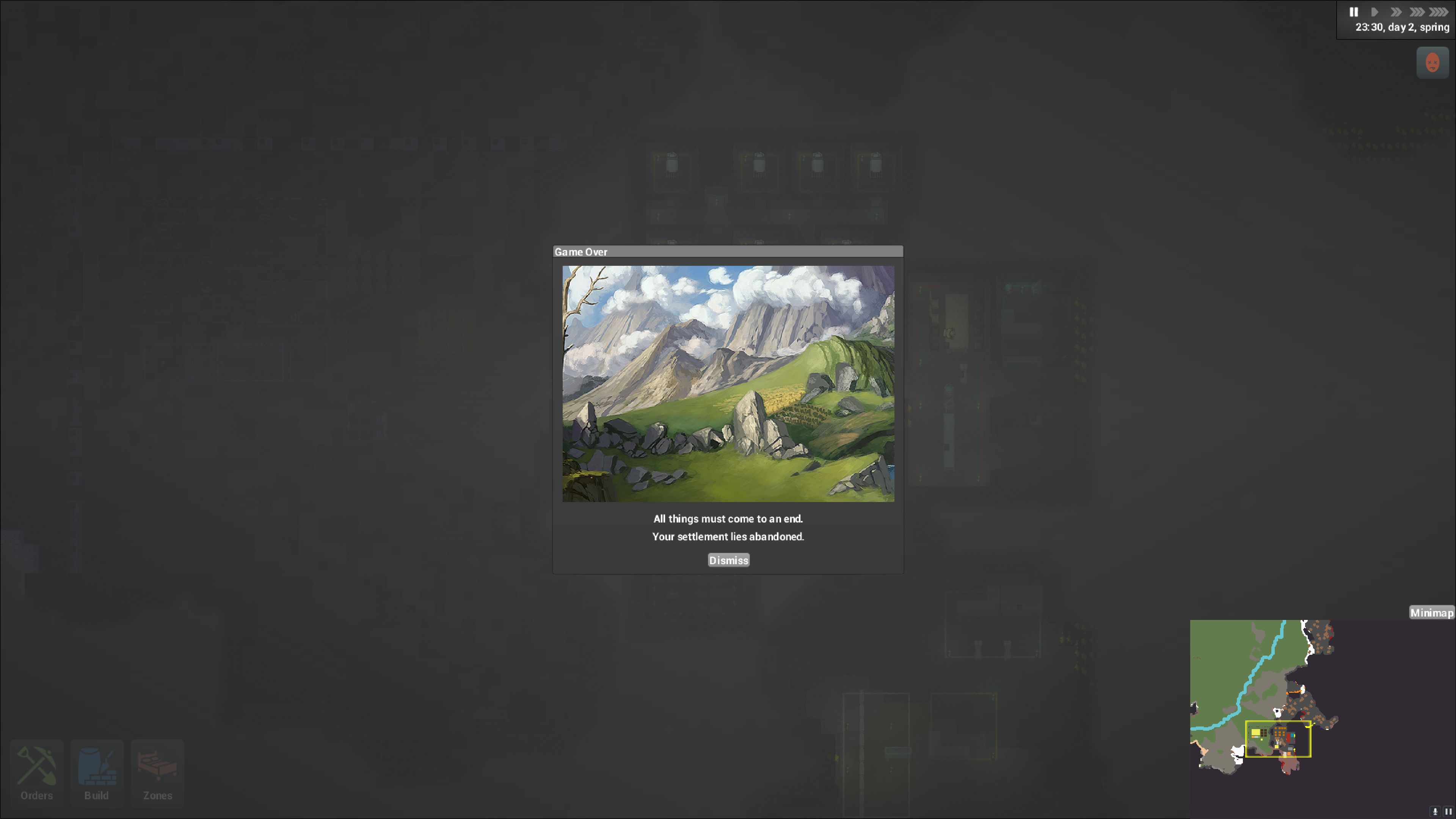 But this kind of emotional simulation feels like King Under The Mountain trying to run before it can walk. Dwarf Fortress is a game characterised by an unwavering obsession with minute detail. In that game, dwarves can break individual fingers, remember past traumas, adopt cats and vomit on specifically their left shoe. It’s a complexity that organically arose over more than a decade of development time by a very peculiar developer, and good luck to anyone who tries to walk that same strange path.

King Under The Mountain has a way to go before it’s free of the shadow of the game that it so wants to be. Future updates promise features that Dwarf Fortress never delivered, such as asynchronous multiplayer, and the ability to play as different races, like orcs and humans, which would eventually set this game apart from a very self-same genre. And already there are neat distinguishing flourishes, such as the visible changing of seasons. Pop this thing back in the oven for a while, and it could go somewhere very interesting.

Until then it makes me want to start a new Dwarf Fortress game, and eat a melon.