“Elder Scrolls without the magic,” is the elevator pitch for Warhorse's historical RPG Kingdom Come: Deliverance, but magic is a relative term - it all depends on what you're used to. The game's stringent recreation of alchemy may seem downright paranormal, for example, if you're used to the streamlined, fire-and-forget approach of a game like Skyrim.

Given how many dungeons, dragons and mages RPGs tend to contain, Kingdom Come's strictly historical approach often seems more fantastical and mysterious than its peers. That mostly helped me to make my way through this open world RPG with a spring in my step, even when bugs and crashes threatened to spoil the experience, and the story fell flat and the sidequests became repetitive.

Midway through the story of Henry of Skalitz, blacksmith turned countrywide errand boy, you're asked to tend to wounded refugees at a monastery while dealing with a local plague outbreak. In many such games, this would boil down to visiting the nearest meadow, clearing out the local rat/unicorn infestation and harvesting a few generic herbs - and you will, in fairness, be asked to fetch bandages and rustle up some deermeat for the sickhouse cookpot. But there's also that alchemy system, whereby you must not only gather materials but follow written instructions at your worktable: bringing the cauldron to a simmer or boil using the bellows, grinding up ingredients and adding them at the right time using an hourglass.

It's quite the adventure, and all of that assumes your character can actually read those instructions, a skill that must be obtained at some expense and honed with practice. It also assumes that you correctly match each patient's account of their symptoms to the remedies in the monastery's archives. Neglect to speak to all the plague victims before taking to your worktable and you might have to make a wild guess about the cure. And just to pile on the pressure, one of the people you're trying to heal is a mercenary your liege-lord has ordered you to interrogate. Better do your homework, then.

Set in 14th and early 15th century Bohemia, Warhorse's debut RPG shines brightest when the quest design really digs into the peculiarities of its era, not quite cutting you adrift, but certainly not holding your hand. Broadly, the game blends the freeform progression and swirling, reactive NPC citizenry of an Elder Scrolls with the grot and skulduggery of a medieval conspiracy thriller. As the game begins, poor young Henry's village is burned to ashes by a marauding tyrant, sparking a quest for vengeance that soon enmeshes you in a wider conspiracy.

The story keeps you moving around the game's vast persistent map, and serves up an enticing variety of very open-ended quests. You'll be asked to scout out a bandit encampment, describing the terrain to a general and advising him on how many troops to commit; as with the plague cure scenario, it's possible to observe wrongly and screw up your side's chances in the ensuing brawl. You'll do a little detective work, hustling peasants for dirt on their neighbours using any combination of threats, theatrics and common-sense reasoning. You'll serve as page to some toffee-nosed princeling, chasing down boars in the forest (if he really gets on your nerves, you might find a way to head home without him). All these scenarios float atop the placid tides of village life, with NPCs following daily routines and forming opinions of the player that have a range of effects. Act the brigand, and guards may insist on checking your inventory as you stroll about. Keep your nose clean, and you'll be able to push for lower prices when haggling.

Henry's stats, meanwhile, are increased by performing the associated action, and there are perks to unlock in each of the game's skill trees, from combos and special moves to traits that let you carry more stuff, obtain valuable pelts from animal carcasses and minimise the wasting effects of time in jail. Or the effects of booze and hangovers.

Deliverance's narrative is good at taking you places and changing its tune to fit the circumstances, but the tale itself dissatisfies. Largely that's because it's more about machinations than people, offering up a parade of soap opera sketches - ornery lords, roguish priests, preening bureaucrats - who further the plot but rarely tickle your curiosity. Henry himself is about as exciting as a bowl of porridge, though I enjoyed watching other characters respond to his rapid ascent of the hierarchy: there's a hint of Geralt of Rivia, even, to how the character is at once courted and resented, a useful pariah in a world of rigid caste relations. But the script never crackles like that of The Witcher 3, and though they usually have ulterior motives, the merchants, peers and yokels you'll meet harbour few genuine surprises. 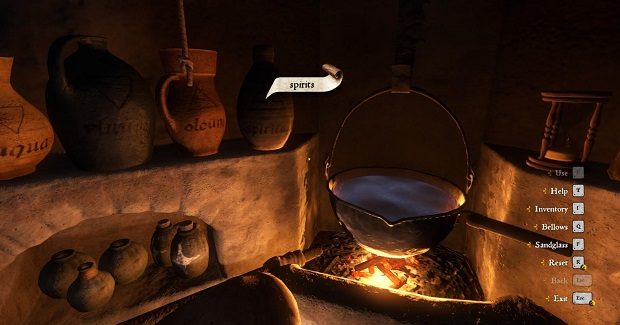 It's not a story that has much time for women. Since you play the pre-designated character, Henry, it's down to the supporting cast to provide different perspectives. Unfortunately, female characters typically fall into the categories of maidenly love interest, prostitute or surrogate mother, in keeping with the portrait of a “purely patriarchal” society described by Kingdom Come's historical database. I don't know enough about 15th century Bohemia to address this, but I'm not sure the defence of historical accuracy extends to blokier character buffs like “Alpha Male”, which confers a +2 charisma boost when you visit the brothel.

Tedious macho elements aside, there are other questions about the depiction of the people of early 15th century Bohemia. During development director Daniel Vavra claimed that there were "no black people" present in the area of Bohemia covered at the time of Kingdom Come's events and though the game doesn't present the region as a bastion of monoethnicity, the issue of race deserves further examination. I'd especially like to read a critique of its portrayal of the Cumans, a Turkic nomadic people represented by other characters as vicious killers, who often feature among the ranks of your enemies.

Vavra has defended the research that went into the game's racial diversity and apologised for some of his comments, and it's important to note that the development has been a collaborative effort of more than 100 people rather than the work of one man. If Kingdom Come existed in a vacuum, the treatment of the Cumans might seem like a meaningful depiction of the othering of outsiders, which might in itself help us to understand characters and the setting. In reality, it's reasonable to dig deeper into the game's claims to accuracy in this and other regards now that the whole picture can be seen, and that's something we'll be doing.

Kingdom Come's world is grim and life can be cheap, but the game's survival mechanics are gentler than they first appear. You'll have to worry about hunger, which erodes your stats, but between hunting, stealing, the spoils of war and the pots of bubbling stew you'll find at taverns, it's hard to run out of grub. I've spent more of Deliverance worrying about the effects of over-eating than malnutrition, and much of the food I picked up eventually rotted away in my pocket. Fatigue can be tricky, as you'll need to find a bed or pay for one, but you'll acquire a permanent lodging once you're done with the prologue, and there are perks you can unlock to make the effects of insomnia less pronounced.

The game's approach to saving is harder to swallow. To checkpoint progress you must either sleep, reach a significant quest milestone or down a tot of Saviour's Schnapps, a finite beverage that can be bought (expensive) or brewed (time-consuming). Fortunately, small amounts of booze improve certain stats for a time, including your charisma. My version of Henry has accordingly passed many a fateful conversation in an amicable stupor, swaying in and out of view. 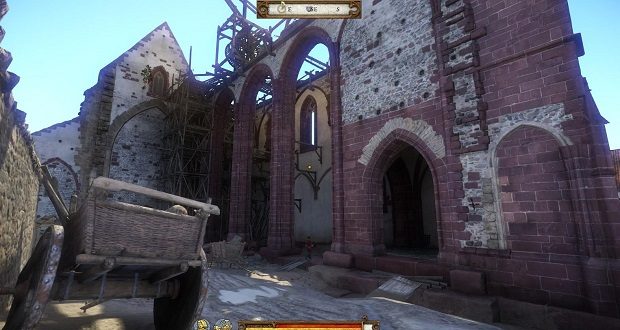 Tethering checkpoints to boozing is fun, but the lack of a quicksave does get annoying. Partly that's because the game is somewhat prone to crashing at the moment, and partly, it's because Kingdom Come's melee combat is as tough as horseshoes. The basics see you angling your weapon with the mouse, then left-clicking to swing and right-clicking to stab. To defend you hold Q, or tap it as your opponent swings to parry and create space for a riposte. Angle your weapon to meet a swing and you'll block more effectively; conversely, you'll want to lay into an opponent's unprotected side to break through their defences. All this burns stamina, and exhausting your stamina isn't a good idea if you plan on running away.

It's a ferociously in-depth system that's enjoyable to master, but you'll need to grit your teeth. There are practice arenas at many towns where you can level up individual weapon stats and practice combos. It's wise to train often, because if you prioritise the story you'll quickly run into challenging opponents. Quality of equipment naturally counts for a lot, but it's not just a question of overall defence values: you'll need to layer gear properly, wearing a nice padded vest under your mail, and patch up any holes in your regalia between scraps. If nothing else, well-kept gear might help you talk your way out of trouble. NPCs judge by appearances as much as eloquence, and anybody whose helmet looks like a colander evidently isn't much good at protecting himself. 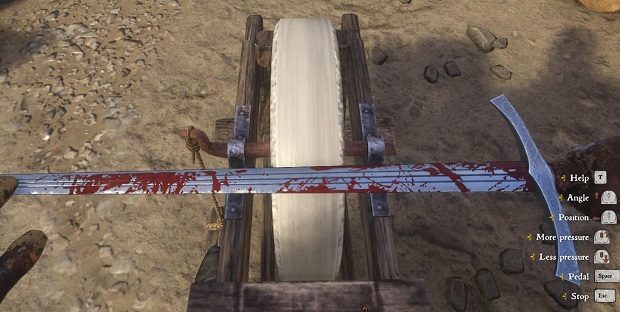 There's a point where Kingdom Come's rigour loses its novelty, and the game's rough spots grow more pressing. Some of the milder hiccups are delightful in that usual open worldy fashion – at one point I beat a man senseless and stole his clothes, only for him to greet me gaily on the road a few moments later. Less forgivably, there are quirks like NPCs refusing to loose their remaining arrows in an archery competition, forcing you to throw the tournament. The landscape can also be unruly when you stray off-road. You'll encounter fences topped with invisible walls, and hedges that spurn your advances where others pose no barrier – worse, you might end up trapped in one.

Aside from story missions, side quests and recurring activities like alleyway brawling and dice games, there are random, pop-up scenarios that prompt awkward memories of Bethesda's early forays with radiant storytelling. One of the common examples involves a corpse in the road and a stranger who immediately accuses you of being the killer, to varying outcomes. I have experienced well over a dozen renditions of this, but as far as Kingdom Come: Deliverance is concerned, you can never have too many roadside corpses. Fortunately, it's always possible to ride around them. 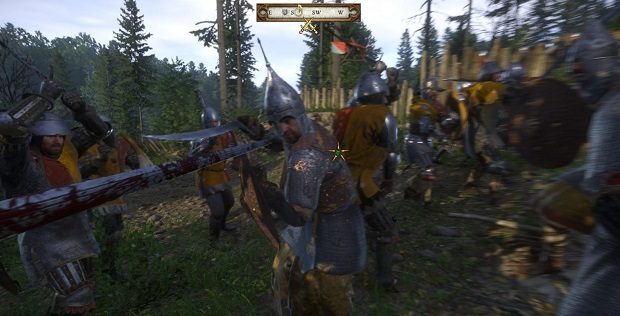 The measure of an open world is ultimately not the story it tells but whether you're happy to kill time within it, and Kingdom Come: Deliverance offers plenty of ways to do that, even if a lot of them will, in fact, get you slaughtered. It isn't the departure I was hoping for, thanks to a shortage of character to set against the nuance of its historical sandbox, but the grubby realism is a pleasant shock next to the tales of elves and dragons that are its nearest competition.

Kingdom Come: Deliverance is available now for Windows and is £39.99 via Steam.