Legend Of Grimrock is a very special game to me. Hell, it's a very special game, full stop. It's splendidly well made, brilliantly designed, and absolutely captivating with a minimal number of tools. Look at the unsightly joy it inspired in me. But personally, it's also a game that feels like a direct line to my late father. Not least because he wrote about the game for this very website.

So forgive me as I fluctuate between reasoned discourse on why this is such a great game, and sentimental waffle about how I miss my dad.

If there's one game that dad loved in the last five years of his life, it was Skyrim. If there's one game I forced him to play, it was Grimrock. Forced him because in his early 60s he'd hit a bit of a gaming rut. Having been someone at the cutting edge of gaming in the 1980s, even getting a Spectrum 48K to review before their original release (he was a dentist, so, um, still not sure how that happened), he'd maintained that love throughout the '90s and '00s. And then it was almost like he'd lost confidence in his ability to play games, pretty much alternating between Skyrim and the original XCOM for the last six years of his life. When Grimrock appeared in 2012, I knew it was a game he'd love, having spent so much of the '80s and '90s playing every blobber out there, most especially Dungeon Master and Lands Of Lore. But I also knew he'd start it, find something the tiniest bit unfamiliar, and just boot up XCOM again. So my trick to make him play it was to commission him to write about it.

The result was the barely comprehensible madness that was A Dad In A Dungeon, a five part column that I wrestled into something resembling sentences, and that won a huge amount of affection from RPS readers. By getting him to write about it (and believe me, it involved a lot of phonecalls of imploring him to stop being such a baby and keep trying), he stuck with it, and he ended up enjoying it more than he was willing to admit. And as a result, this excellent tribute to the dungeon explorers of 30 years ago has become inextricably woven into my memories of him toward the end of his life.

Which is all to say, it's not a game that I've found easy to return to. It's been four years now, and that uninvited house guest Grief has become enough part of the furniture that I can play it today without it being wrenching. I still can't read the columns, don't know if I ever will be able to, but the game is finally mine to return to.

I'd forgotten about the crabs. Bleaauuuurrrgghhhh.

I think what I love most about Grimrock is that it embodies my memories of a classic era of gaming, rather than the somewhat less enjoyable reality of them. Grimrock is how I remember Dungeon Master, Lands Of Lore, Stonekeep or any number of late '80s/early '90s dungeon crawlers, with zippy movement, frantic UI juggling, and clever puzzles all over the place. As opposed to when I try to return to such games and find clunky, achingly slow games that seem to put far more emphasis onto repetition and failure than intriguing situations and rewarding smarts.

(I'd like someone to do this for all genres, please. Someone go back and remake all those Sierra adventures I remember adoring so much, but where you can walk in a straight line without getting killed and there's the faintest degree of focus at any point.)

I wonder at the childhood me who was willing to put up with all those games' nonsense, and wonder if there's something wrong with me now that I no longer can. But of course that's not really it. The fact is, games were really annoying back then, and we put up with it because there was nothing better. If watching films in the 1980s had involved constantly having to crank an enormous metal wheel while someone poked me in the eye, I'd still have wanted to watch films in the 1980s, but I'd sure as hell not want to go back to watch them today now those awkward issues have been ironed out.

But of course the other part of it was, I played them with my dad. 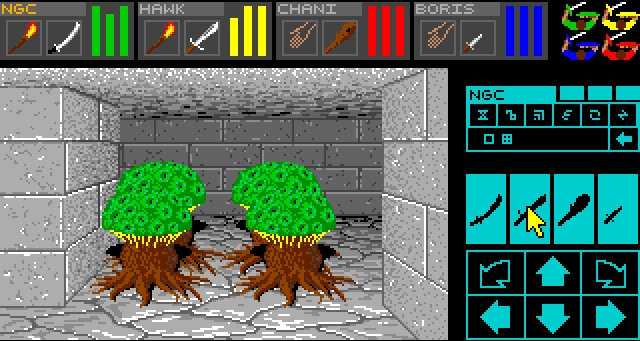 My dad, as you might imagine would be necessary, was a far more patient man than me. Before he had his study, he had nowhere to play his games but what we optimistically called the "breakfast bar" in the kitchen. I'd pull a chair up and sit next to him, endlessly nagging to have a go, where he'd watched me ruin all his progress and probably find some peculiar way to overwrite all his savegames. One of the games I most strongly remember watching, from when I was 9 or 10, was Dungeon Master. I wrote all about the experience of watching dad's hand trembling as he fought level 13's dragon way back in 2009, so I won't repeat it yet again. I don't remember his ever complaining about the fiddlyness of the movement, the slow loading, the way it took so long for a door to chunk-chunk-chunk its way down. All things that'd drive me potty today. Of course, he also lacked awareness of anything else being possible, FTL's Dungeon Master was a seriously cutting edge game in 1988.

Legend Of Grimrock streamlines every single thing I'd be making a fuss about. It's just so supremely well put together, its tile-based movement never feeling restrictive, instead wonderfully flowing. Dancing around a skittish spider, lobbing in sword lashes and fireballs before frantically skipping left, forward, around, chopping with an axe... it all works so smoothly, making a once archaic approach to movement completely and utterly make sense. The levels are laid out with extraordinary economy of space, square paper maps looping around themselves, always interesting, never filling with dead space. Then it's all smothered in puzzles, DM-style teleport gates, trapdoors in the floor to secret chambers, and best best best of all, hidden switches set into the textures of the walls.

But actually that's not what's best best best of all this time. Because this time, to my heart-bursting delight, the gorgeous face of my five-year-old appeared at my study door and said, "Daddy! Can I watch?!" "Sure!" I said, not noticing the generational timeloop as it was happening, and plonked him into the stool he sits in when joining me at the PC. It only hit me as I was playing, when he properly jumped in his seat at the first appearance of a spider. "Oh my goodness!" I thought in my head, and then my mind was just pictures and feelings, not words.

Straight away he was involved, his main job to look for secret buttons. Very soon after he was literally hiding behind my back, having climbed from his stool to the gap my terrible posture leaves between my back and the back of my office chair, crouching down behind my shoulders, peeking out to scare himself some more. "Tell me when the crab's gone Daddy, I've got my eyes closed."

"Granddad loved this game," I told him, as we entered level 6's opening chamber, three spiders spawning around us, and I charged for the doorway top left. I heard him exhale as the gate dropped down and the spiders were trapped on the other side. To Toby, Granddad is a sort of mythical figure, his 'memories' of him entirely based on photographs and stories. He has toys Granddad made (my dad was oddly good at woodwork, fashioning some amazing trucks and boats and a fire engine for me when I was new), which are treated like holy relics. Played with, but with a reverence that is so unlike his usual wrecking ball approach to life. "Really? Wow," he says, before all that is forgotten by the first appearance of the Ogre. And I'm now mostly wondering how much trouble I'm going to be in with my wife for letting him watch this.

(I'm somewhat relieved that tea and bedtime interrupted before I went on to reach the first hovering fire demon thing at the end of the level. I'll be impressed if we get through the night without at least one ogre-based nightmare.)

I clearly can't credit all this mawkish fondness to Grimrock. It was there at the right moment for dad and I to connect on one last game before he suddenly died four years later. It echoed those bonding enduring memories we had with Dungeon Master some 24 years earlier. And then it was there just today to allow the spiral to continue on between me and my own son. Perhaps one day Toby will convince me to give a new game a try after it reminds him of time spent sat next to me at my PC, then show it to his own kid. See, mawkish. But fond, happy, good.

Yet I can credit Grimrock with a good amount of it. Because it absolutely is this pan-generational game that truly understood the dungeon crawlers of three decades back, while still feeling like a relevant and modern game. And yes, goodness me, it's eight years old itself now, but its timelessness means it doesn't feel vaguely dated. And actually its graphics still look really decent, from the horror of the tiny teeth in the crabs' maws to the shiny slime on the snails. Sure, the walls are monotonous, but that was kind of the point.

Grimrock will always be special to me for very personal reasons. But it's also an all-time great in its own right, and one I'm delighted I'm finally able to return to. 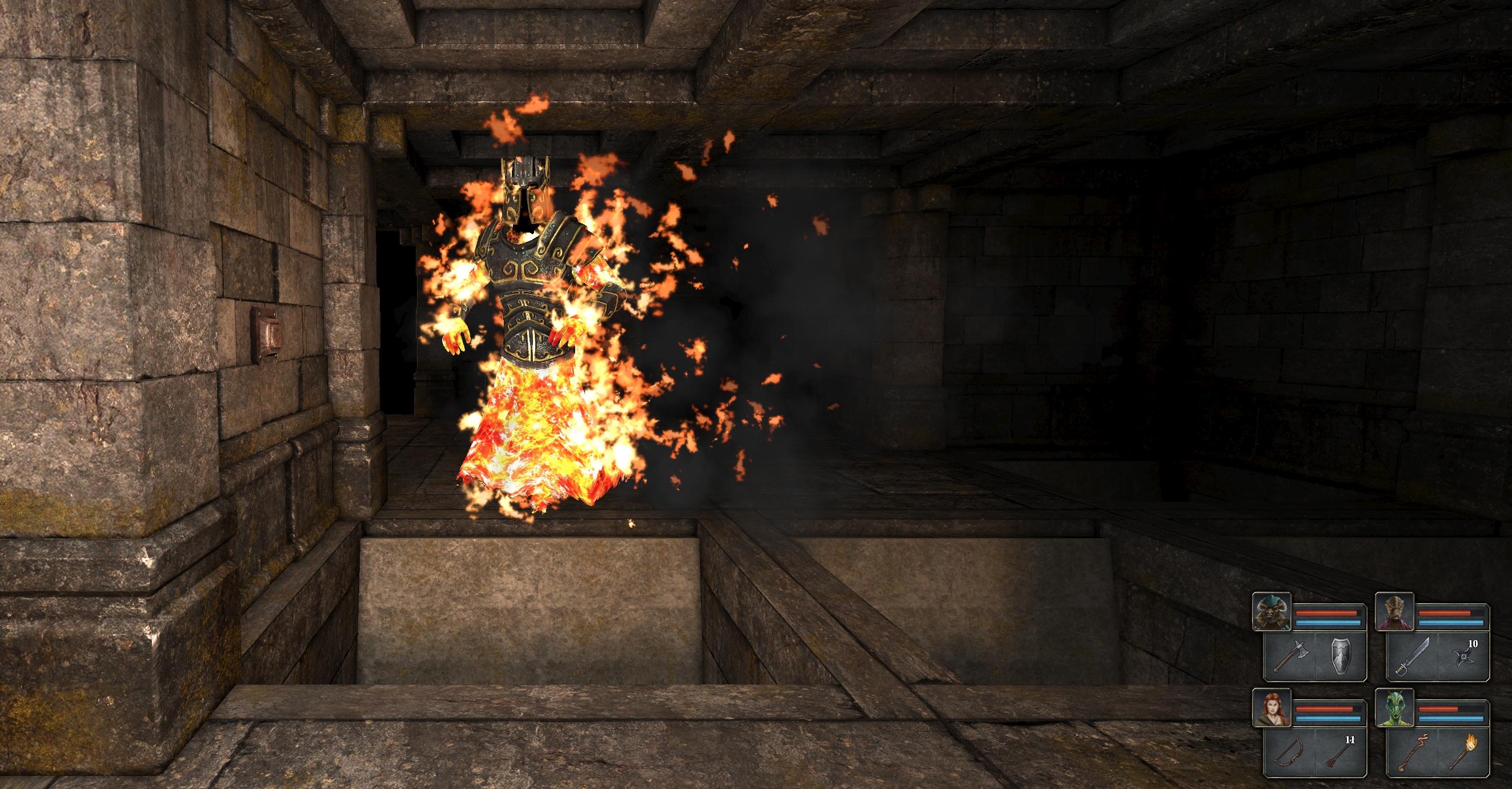 Can I still play Legend Of Grimrock?

Absolutely, with no tweaks, no patches, just right as it comes. It runs superbly at a silly 3440x1440, and hasn't aged a day. It's on Humble, GOG and Steam.

Should I still play Legend Of Grimrock?

Definitely! Whether you have fond memories of the late '80s' blobbers (read: "are old") or just want to enjoy a big, fun, approachable old-school RPG (read: "are young"), this is a stone cold classic.