League Of Legends developer Riot Games are making a collectable card game called Legends Of Runeterra. I got to speak to some of the developers and do some shuffling myself at their Dublin offices a couple of weeks ago, and I’ve got the scoop: Yes, there are poro cards, yes, you can build a deck to synergise with them, and yes, the board features a pettable poro. It also aims to expand the story of the League Of Legends champions, prevent a stale meta from developing, and work from a business model that expressly designs out the ability for players to become whales. And did I mention the pettable poros?

“We anticipate that people will come to the game initially because players have really fond attachments to champions, and they just want to play [as them],” design director Andrew Yip tells me.

League of Legends players should find many familiar faces on the cards as they build decks and attempt to whittle their opponent's nexus down from 20 health to zero. Players pay mana, of which they have a limited amount per turn that increases through the game, to play a card from their hand onto the board. The opponent is then allowed to react, the usual turn-based rhythm of a card game shaken up by an "active round system" that causes much more back and forth than similar games. At any point, the attacking player can line up their characters on the battlefield, who always attack from left to right, to commit them to chipping away at the nexus. But the opponent will be able to block them by placing their own characters on the opposite side of the board. Once both players are out of mana or simply want to finish the turn, the attacker and defender swap. 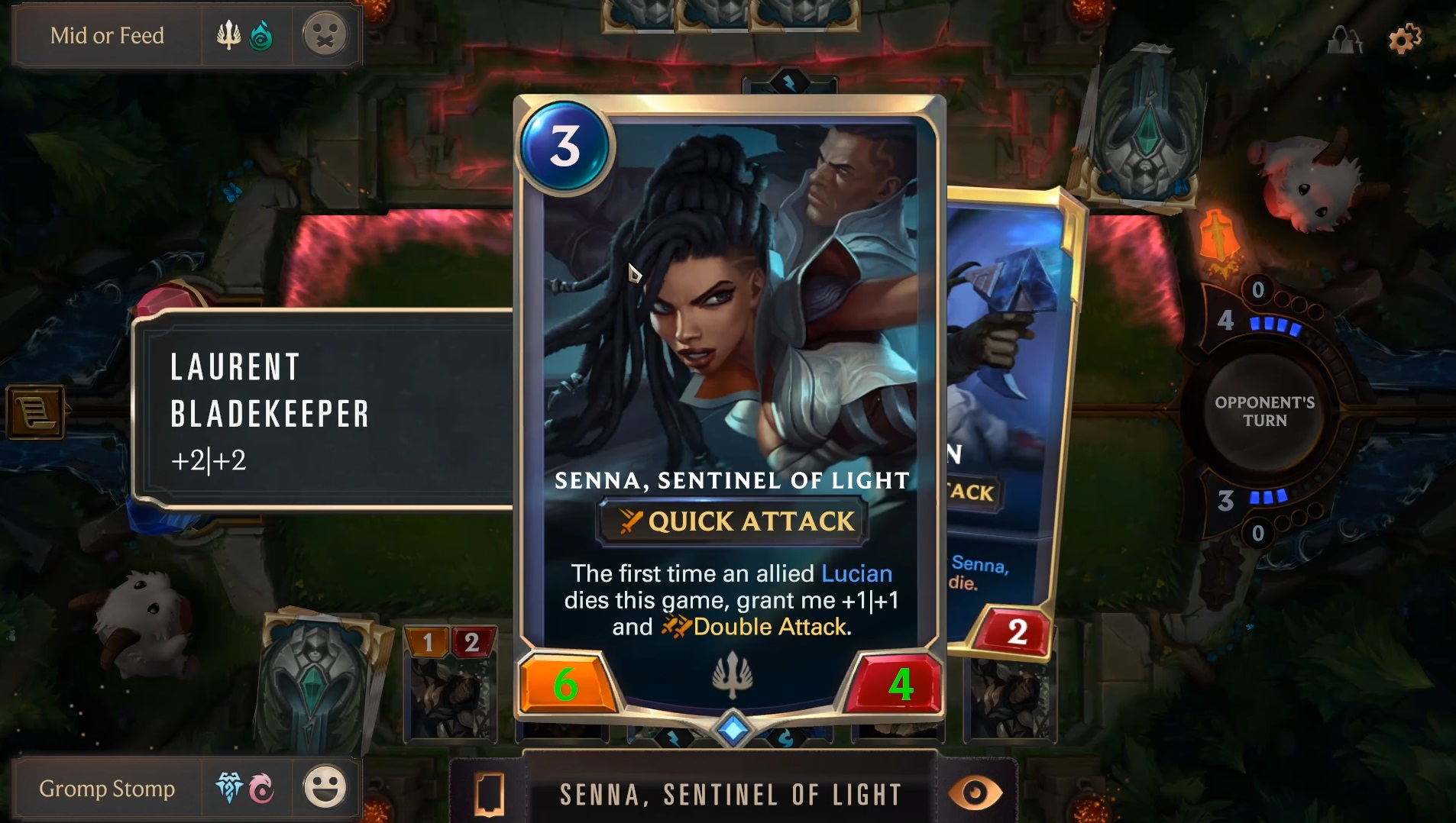 The characters and spells that make up the 318 cards coming to Runeterra’s base set include 24 champions lifted directly from League, with abilities appropriate to their skills in the MOBA. Other cards will be supporting characters, including those familiar for fans of the comics, as well as newcomers that Riot hope will allow them to flesh out the universe’s story in the future. So far that story comes from a dynamic set of voiceline interactions, which react to cards in play and the game’s events, though Yip says that once the relationships are established there’ll be options for “more interesting and complex stories” through potentially singleplayer experiences and “dynamic” use of PVP.

But champions are mechanically as well as narratively interesting. As well as having unique abilities, like Thresh’s healing when he sees an enemy die, they level up after certain events occur. (In Thresh’s case, that’s seeing three enemies die. He seems like a nice fellow.) This gives them buffs that persist for the rest of the game.

You can play up to six champions in a 40-card deck, but cards are also split into themed categories known as "regions". You can combine two of these regions per deck, and can include three copies of any given card, so the most basic formula is to combine two synergistic champions from different regions and include as many copies of each as you can, before filling up the rest of the deck with supporting characters and appropriate spells.

That might sound complicated on its face, but matching two champions and then figuring out what goes with them seems like a good beginner process to get players thinking about deck cohesion, and the ability to mix things up more by bringing in other champions does suggest a greater depth available once players get to grips with the game. 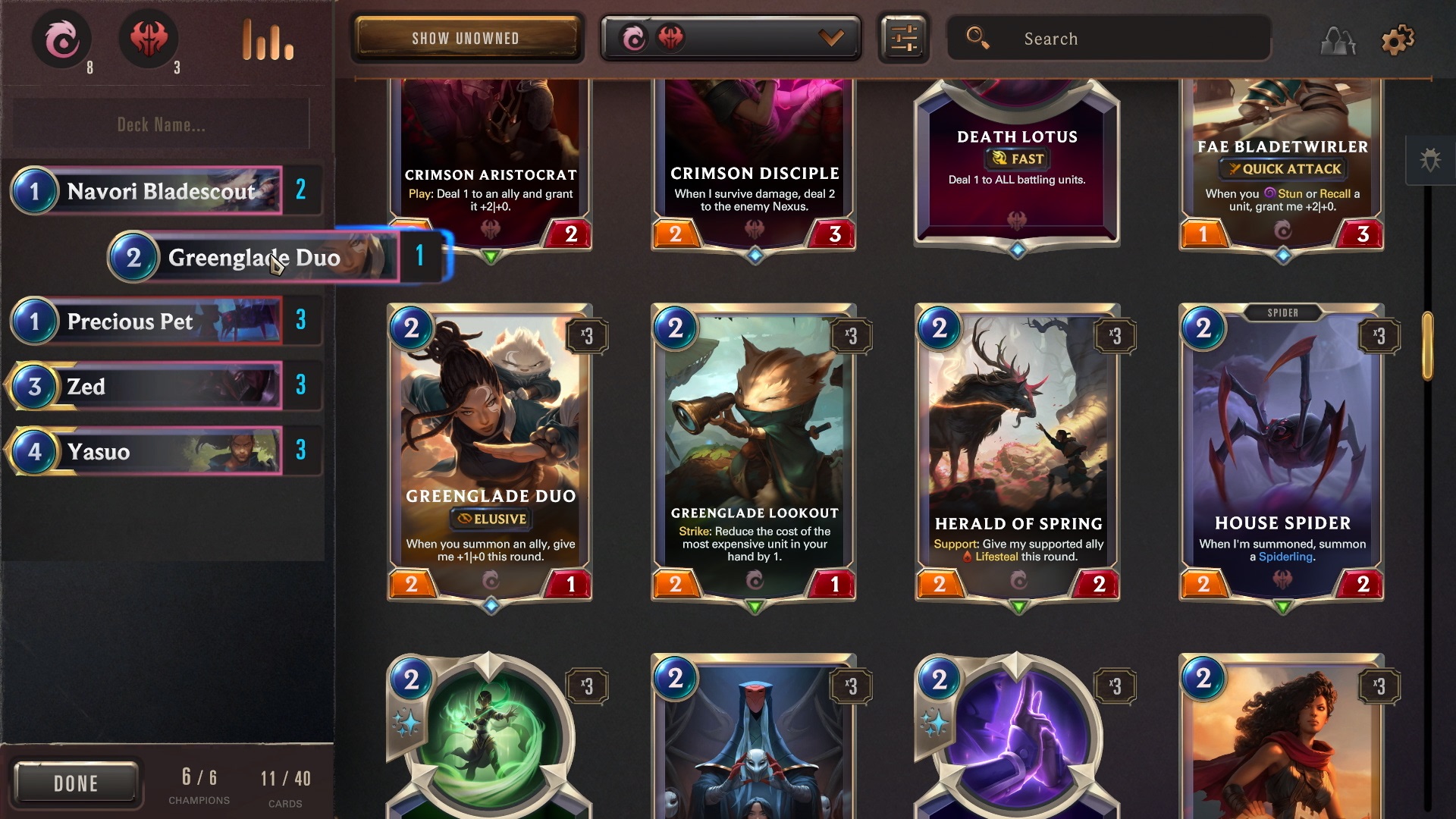 I ask if they’re targeting League players or card game fans primarily. Gameplay initiative lead Blake Midstokke says that the “focus” is on League players, whether or not they’re already into CCGs. “But we do feel like if we’re hitting both of those, [then] we have an accessible game and some depth to the gameplay as well, and we think that card game fans will also be a fan of that, even if they’re not into League Of Legends.”

My curiosity on this point came from being a Hearthstone fan who never played World Of Warcraft – although my visit was before I found myself in the market for a new card game thanks to Blizzard’s condemnation of a pro-player who spoke out in favour of the Hong Kong protests. (Although Riot Games told LOL pros not to speak up either - and they certainly have their own share of issues.)

While Hearthstone comparisons will understandably be cheap and plentiful, particularly after the events of the past week, they don’t necessarily fit especially well. And that’s apparently intentional. According to Midstokke, Yip, and associate art director Andrew Silver, Runeterra is designed with the drawbacks of other digital card games in mind. (For starters, you can overfill your deck during deckbuilding and then take cards out to hit 40, a feature that I and others have wanted in Hearthstone forever.)

The active round system is one thing that feels very different, perhaps evidenced by the fact that I hadn't entirely grasped the rhythm of it by the end of our playtest. It's further complicated by the automatic banking of leftover mana at the end of each turn, which can be used to cast spells (but not use characters) in the next turn. The emphasis on blocking also gives a much stronger element of positioning than in Hearthstone, particularly for the defender. If you’ve played Blizzard’s occasional chess mode, it’s closer to that than a ranked game. 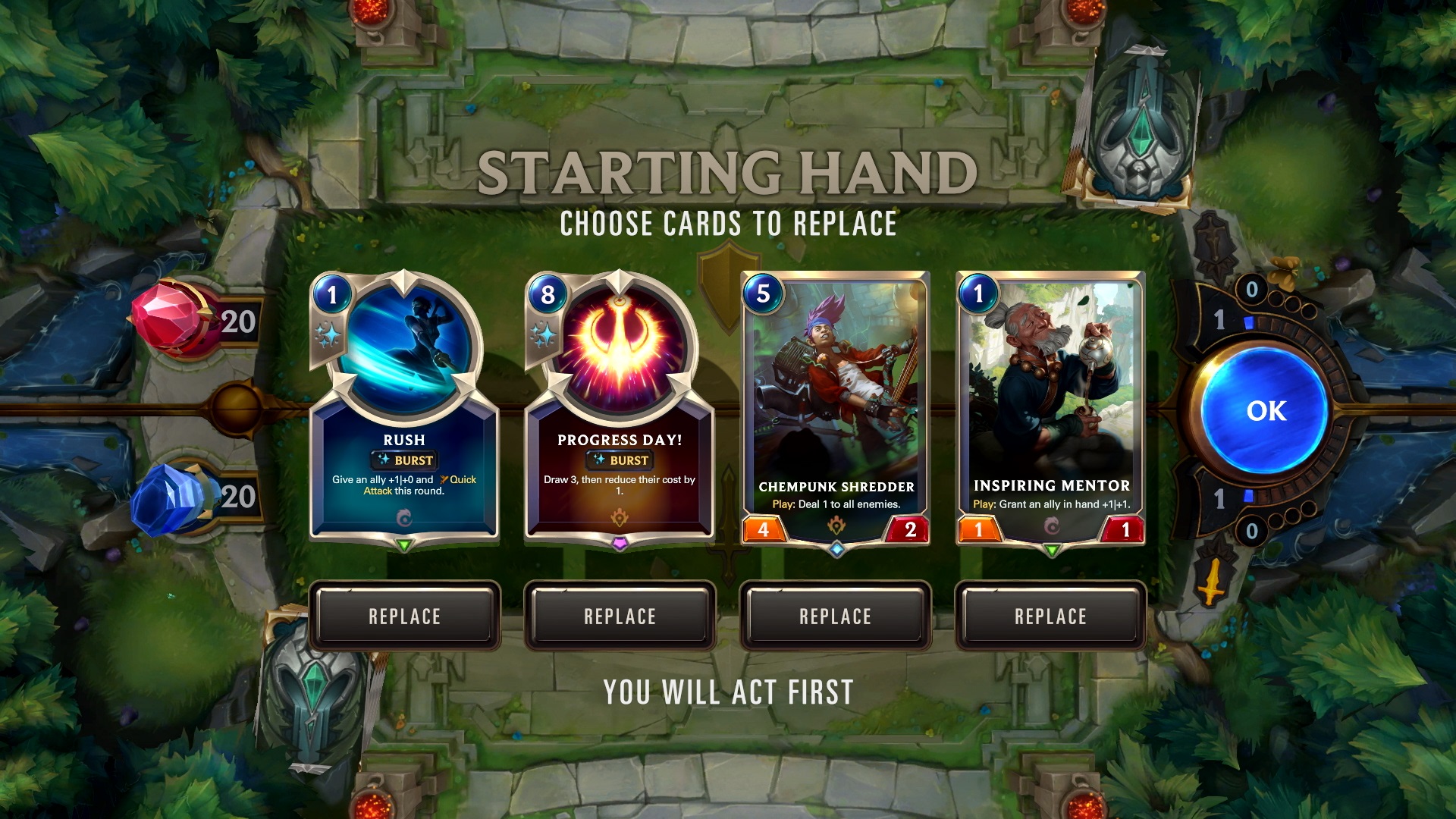 It’s hard to get a feel on how enjoyable the game is to play yet (I’ll be returning after some time with the beta for that), but from my early experience, board control is everything. It’s not especially hard to chip away 20 damage just by having more little cards on the attack than your opponent can block, and therefore it feels like it can get away from you very quickly without a lot of chance to swing things back in your favour.

But the game’s tutorials lay out more puzzly scenarios that get you thinking about the more complicated interactions between cards. Some have effects when they die, or only last for a single turn, for example. More seasoned players will likely learn to use to their advantage once they’ve had their hands on the game for a while.

And the meta game will also be impacted by Runeterra’s business model. The game won’t have an entry cost, and won’t allow you to purchase random packs. Instead, you’ll get some cards by completing “expeditions” (a draft-style mode that focuses on one of the game’s regions), some random packs through match rewards, and can purchase cards you want directly through a crafting system and “wildcards” which can be swapped with a playable card of their equivalent rarity. But you’ll only be able to unlock cards, even through payment, a limited amount at a time.

Yip tells me this is to improve the experience for all players, as well as to avoid potentially unhealthy behaviours. “One of the most exciting times to play a card game, we think, is when a new set releases,” he tells me. “Everyone is like ‘what’s good? What deck have you discovered?’ The hope with our game and one of the reasons we limit players’ ability to buy everything – in part [it’s] because maybe that’s not healthy for them. But the good bit that we’re pursuing for the whole playerbase is [allowing them] to engage in that experience of discovery at the same time and then progress through that experience together.”

He does admit that it may be a “spicy topic,” and depending on player feedback, could change in the future. This mantra of player feedback recurs throughout the day, popping up in conversations about everything from balance patches to whether or not there’ll be an unranked mode. It doesn’t feel quite as straightforward as they made it out to be – fans are a diverse bunch who are bound to ask for opposing things, at which point Riot will have to make difficult decisions – but I took it to mean that much of Runeterra isn’t pinned down yet, and things will continue to change significantly through its betas until its launch sometime next year, and probably afterwards too. 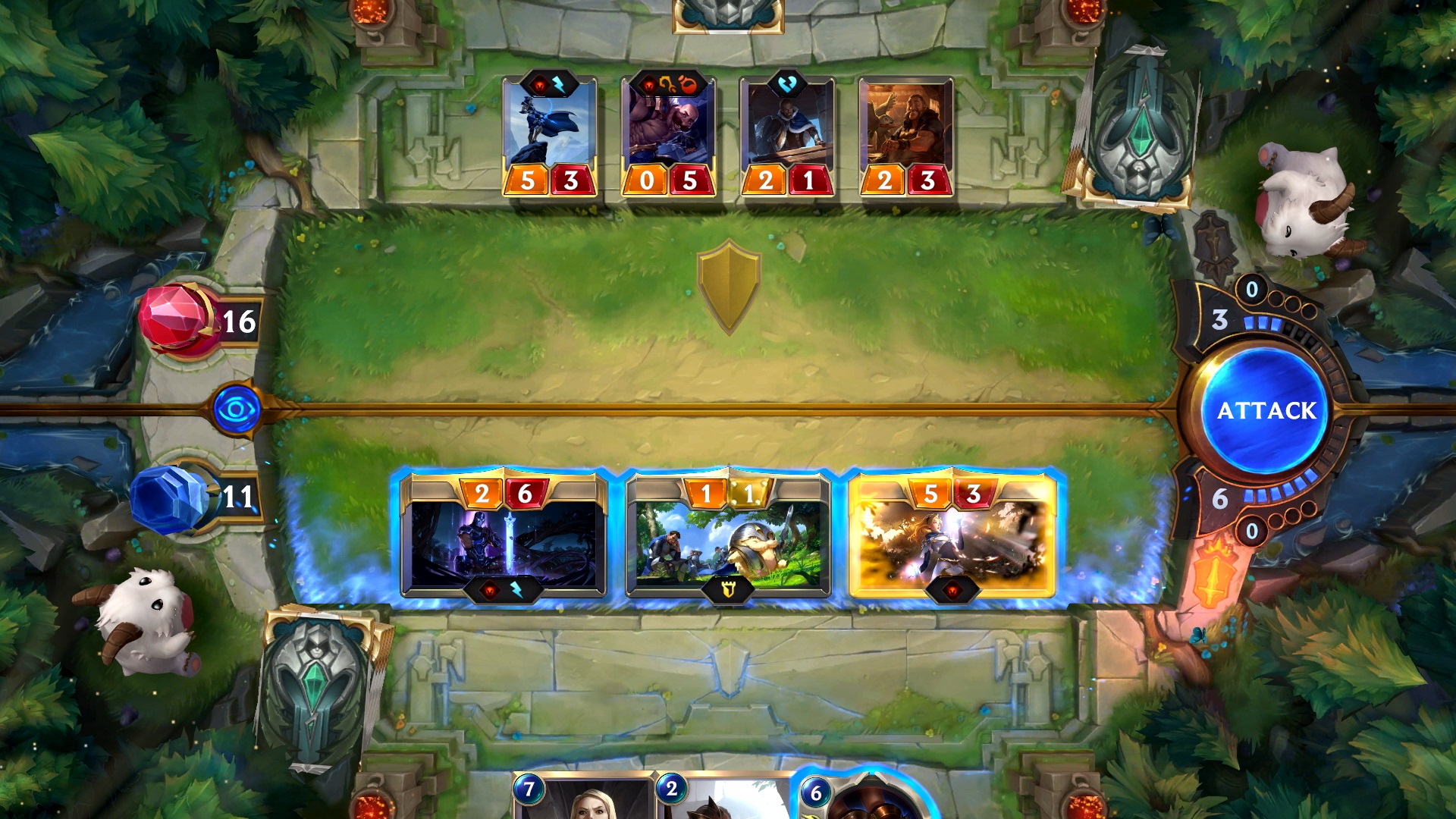 The developers say they’re looking to balance the game monthly, in between the four-monthly expansions, and want “the greatest number of decks to be competitively viable.” This is something they doubtless have experience with in League, and also something that raises questions faced by all kinds of constantly updating games: how do they plan to avoid creating a constant state of crunch as reported in games like Fortnite?

“We are super invested in Legends Of Runeterra as a leadership group and we want to make sure we have a sustainable development team in terms of our practices and our people,” says Midstokke. “One of the ways we’ve been doing that is investing early in our future content…we have things locked and loaded and ready to go. The challenge is going to be figuring out how to combine that with the feedback that’s happening live. We’ll have to get a balance of both.”

As our interview was ending, I brought up the other big card-game elephant in the room: Artifact. Yip explained that, while he respected Valve’s approach, the developers felt as though their strategies would resonate better with players, particularly their business model. But he was also honest. “Are we afraid of falling on our face? Of course. But we can’t [make a game] without accepting that fear and running into it.”

Legends Of Runeterra is having a closed beta as we speak, so there’s likely streamers out there showing it off. If you want in yourself, they'll be inviting more people to a few other sessions until its release. There’s no established date for launch yet, but they’re planning betas through “Q1” of 2020, so sometime after that.