Life is Strange: Before the Storm [official site] is the episodic narrative adventure Life is Strange prequel which shines a light on grieving rebel Chloe’s sudden and intense friendship with school queen bee, Rachel Amber. Rather than this being a Dontnod game the story has been entrusted to third party devs at Deck Nine, although Deck Nine have kept the look and feel of the original episodic teen tale intact, rooting a lot of the action in familiar locations and involving familiar faces. It struggles with characterisation and motivation at times, BUT it also made me laugh out loud and furnished me with an unexpected weepy moment. Here’s Wot I Think:

In case you don’t have Life is Strange as a reference point, you spent five episodes as Max Caulfield, a photography-loving student who can rewind time, as she tried to deal with mysterious goings-on in town, an impending meteorological disaster, and resurrecting her friendship with childhood bestie, Chloe Price. One of the mysteries is what happened to Chloe’s friend, Rachel Amber. I’ll say no more so as to leave those who want to play the original unspoilt but this should give you enough info to get a sense for the timelines and main characters.

In Life is Strange it’s Rachel Amber’s absence which looms large in the lives of Arcadia Bay residents but as Before The Storm begins it’s Max’s absence occupying Chloe’s attention as she falls out of touch, leaving Chloe to deal with her father’s death and mother’s new relationship alone. 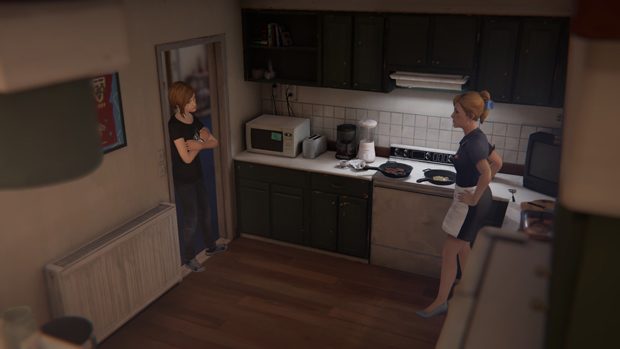 Chloe as we meet her here is angry, upset, sweet, naive, kind of an asshole... She’s pre-blue hair dye, post-discovering recreational marijuana and she *desperately* wants to get into a dive venue to see a Very Loud Band. As she tries to work her way past a bouncer you start to get a feel for the differences in the prequel as compared with its predecessor.

Obviously, without Max, there’s no time chicanery so you need another way to negotiate situations: the power of insults and arguments. How that works is you engage in dialogue with someone and pick options to kind of manipulate the conversation in your favour. It’s stuff like making fun of the recipient, trying to reason with them, squaring up to them, doing your best to be intimidating - that kind of thing.

I really like that that’s Chloe’s solution - shout at a problem and be cross with it until it's no longer a problem, although after one playthrough I’m not actually sure how skilfully I ever actually manipulated anyone. There were also a couple of moments I had that dialogue game sensation of picking an option thinking it would be one tone of voice and it ending up being a different one. As a result I’m not actually sure of my own level of control over the outcome of those conversations. 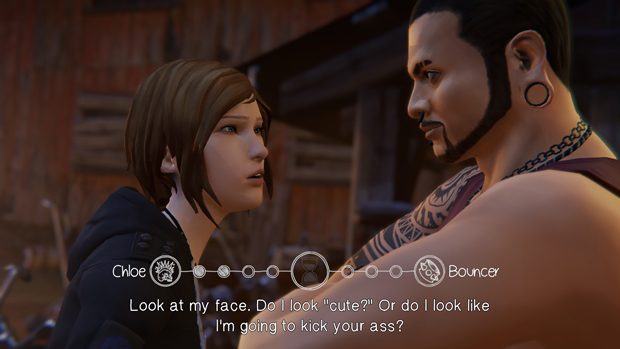 The other issue I had with the dialogue was that it could easily tip over into being clunky - I had a conversation with Chloe’s mum early on and we seemed to be zigzagging all over the place tonally. Confrontational one moment and making a supreme effort to be understanding the next in a way that didn’t flow properly at all. My feeling is that it’s because some choices have ended up being “correct” in terms of how they fit Deck Nine’s idea of who these characters are. If you pick the other option the flow gets lost and you judder off into a different emotion.

It was definitely the conversations with Chloe’s mum (Joyce) and Joyce’s boyfriend, David, where that was most pronounced. Little moments of kindness or attempts to defuse a situation on Chloe’s part didn’t feel like they landed quite right - either they seemed to come out of left-field or they didn’t seem to make an impact in the conversation in the way it felt like they would in a real exchange. Also David’s characterisation feels all over the place anyway. He alternates between demonstrating why Chloe hates him and then being a bit more human but those two sides don’t cohere into a single person. 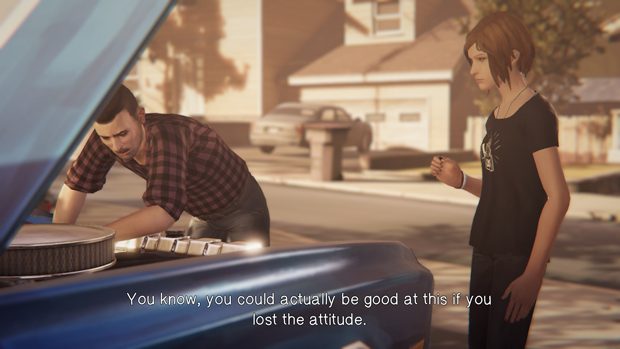 Far more successful were some of the interactions at school that morning. It’s an optional action but I would advise anyone who plays to try out the little tabletop roleplaying session a classmate of Chloe’s called Steph is running on one of the picnic tables. That’s the part where I ended up cackling away to myself over some of Chloe’s actions and responses. I wonder whether pushing people towards playing it will spoil the surprise, but it felt like such a lively and lovely way of building up her personality through interactions, plus a couple of moments reminded me of my own recent campaign. 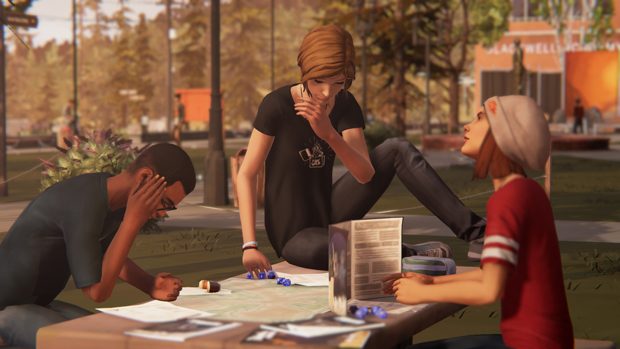 As well as the conversational decisions you’ve also got a few bits of moral choice-making to factor in. For example, I currently have a certain amount of stolen paraphernalia in my possession, plus a black eye, and have seen the little “THIS WILL HAVE CONSEQUENCES” icon flash up ominously as I accrue misdeeds and heroics. Mostly misdeeds.

In terms of the relationship with Rachel Amber, that’s an odd one. I keep warming to it but it does feel like there’s something missing. I think that something is more to do with - you know when you watch a TV show or a film and the lead characters are saying all the right things and the plot makes sense and you get what’s supposed to be happening but the two of them just don’t seem to have onscreen chemistry? 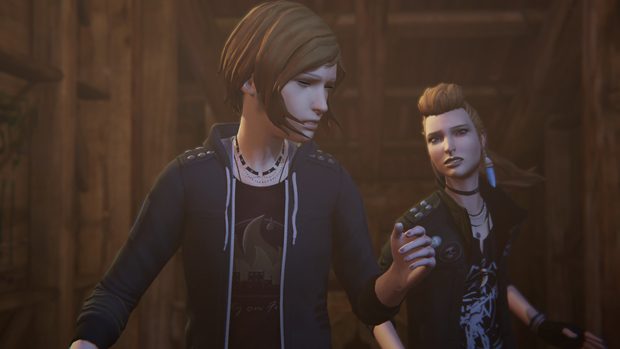 When I walk myself through the beats of their story so far the intensity of Rachel and Chloe’s friendship and the teenageness of it all makes perfect sense. They’re intense, they’re angry, they’re attracted, they both want to give Arcadia Bay a right wallop, and yet I kept feeling like I’d missed something. Maybe an extra scene at the mill, where the gig happens, to illustrate more of that electricity or that moment of connection? Maybe a change to some of the animations, although there was some delightful body language here.

The slight disconnect has a peculiar physical analogue later when we visit the junkyard you might remember from the first game. Smashing objects felt weirdly toothless. I was trying to work out why and Inside came into my mind. In Inside the boy character has these amazing animations for lifting heavy things and interacting with objects where you get a real sense of muscles straining to perform an action - here that tension is absent, like, that’s not the torso of a person swinging a baseball bat with full force. That said, there’s also a more successful execution of the same idea which left me weepy, so.

Oh! Lastly, I wanted to make sure that I pointed out that you check Chloe’s objectives; they’re written on her hand in pen! That was a thing teen Pip used to do and it would drive my parents and my teachers up the wall. They hated how messy it looked, but what was I going to use instead? My homework diary? Homework diaries are for LOSERS. That said, teen Pip spent a lot of time removing backwards ink imprints of to-do lists from her chin after leaning on her hands. 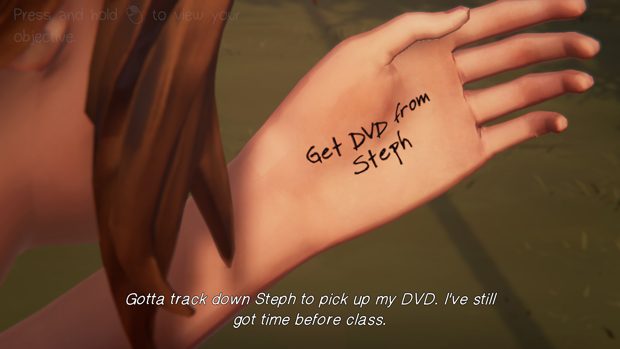 Making a prequel always seems like a strange endeavour. You’re working towards an end point which the audience already knows to some degree so it becomes an exercise in how to tell a meaningful story where the future is already familiar. With two episodes left to go it’s impossible to say whether Before The Storm can rise to the challenge but despite some clunkiness it has real promise. The presence of familiar faces hasn’t felt too forced or heavy handed which I’d been worried about, and Chloe without Max is a sympathetic messy ball of anger and sadness. The original game and how Rachel Amber’s story played out will affect how those familiar with it read some of what she says and does, but not in a bad way. So far at least. It's hard to judge the story after just one episode.

I also know that the reservations I have in this first episode are similar to those I had with Life is Strange’s first episode and that settled down to become my game of the year. Here’s an observation from that about Chloe and Max’s friendship: “The characterisation is still wonky – her reaction to reconnecting with someone she thought had abandoned her for years felt particularly off”. And one about some odd dialogue between Max and someone else: “the awkwardness felt authentically teenage – but it could equally have been clunky writing”.

Ultimately it’s actually so similar that I’ll quote the conclusion from that piece here as it applies equally - the fiction I’m referring to is fledgling teen writing you’d find in the original section of fanfiction hubs.

“I know it sounds like there’s a lot of criticism there but episode one is also earnest and gawky and sweet. [Before The Storm] itself feels teenaged. It’s not realistic and it’s not subtle but it taps into a vein of fiction I’d forgotten existed – one which is imperfect, exploratory and full of liminal charm.”