I've already reviewed the Logitech G603, which for me was the perfect, non-ridiculous wireless gaming mouse but for some facepalmy design that made it too uncomfortable to use without brutal modification. Today, I've got its bigger, also wireless brother, the Logitech G903 to look at to see whether that, too, might be worthy of the title 'best gaming mouse'.

The G903 has similar but improved innards, a different, tweakable design, a fancier scrollwheel and buttons and, the headline feature, an extra-purchase mousemat that wirelessly recharges the mouse's battery while you use the bally thing (i.e.: never worry about running out of charge while you're mid-way through sticking a sword through something's tummy ever again). WITCHCRAFT.

First things first: no finger-spikes here. There is a middle sibling in the Gx03 family - the G703, which boasts most, but not all, of the 903's features within the 603's less terrifying Superman-III-robo-lady exterior - and visually, I prefer the 603 and 703's design by a long shot. That said, I'm not sure either would look quite so neat and tidy once I'd violently de-clawed those spikes around the wheel.

The 903 looks a lot more like the gaming-specific peripherals we've sadly become resigned to - a bit like a weapon from some late-noughties Tom Cruise film you can't quite remember the name of. It's not hideous, but I could definitely do without the two underslung 'horns' on the front, and the faux-vents halfway down its body.

The latter is one example of where material has been cut away to keep it agile. Unfortunately, the general, plasticky weightlessness robs the 903 of the premium feel one would expect from a £130 peripheral. At least there's a solid surface around the mousewheel. 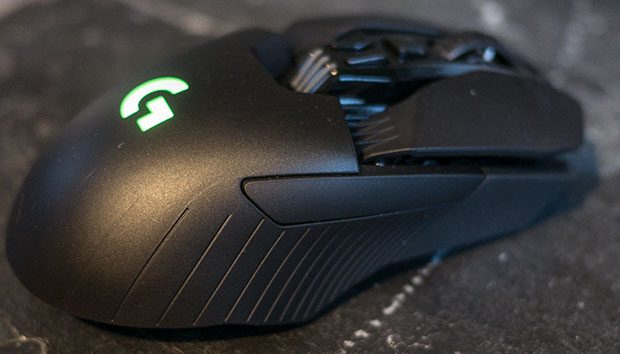 Speaking of which, the G903 has a trick not available on the 603/703. A button switches it from a clicky scroll suited to flicking through guns or inventory items to a buttery-smooth scroll that's easier if, say, you're navigating to the umpteenth page of your best PC games of 2017 spreadsheet. I do find that the rachety feel makes my finger a little uncomfortable if I'm spending a long time with a document, so I do miss this toggle when I return to my old G602.

What I don't miss is the more general construction. This is quite a narrow mouse with a noticeable taper in the middle, lending it almost an hourglass aspect. This means my thumb and little finger squeeze into the mouse rather than rest on its lower edges. This pincer movement also forces the bulk of my hand upwards, rather than the more usual palm-resting scenario. It's a subtle difference, but one that I found caused significant finger-fatigue during use. 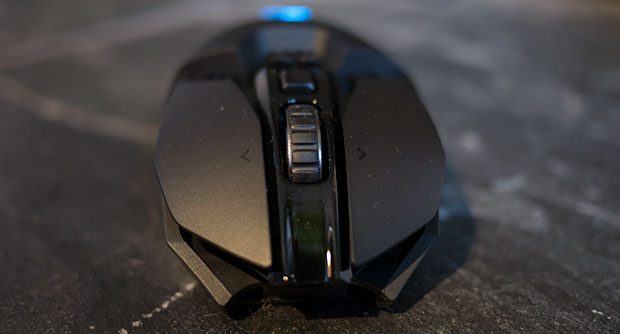 It's not a design boo-boo this time, but instead reflects different schools of mousing thought. The 'palm' grip is the most common mouse design, but many feel that the alternate form known as the 'claw', as the 903 encourages, is better-suited to the likes of RTS and mobas, as the tighter, pincer grip enables a touch more fine control.

Personally, I'd prefer a wider waist and a fully-supported palm - I find this uncomfortable, but in a harder to pinpoint way than I did the 603's finger-poking. A low-level but constant fatigue. I've actively considered sticking some kind of putty to its sides.

Frustratingly, so much else is good about this mouse, making me reluctant to part with it despite its Jessica Rabbit construction making it ill-suited to my weary palm. It's neither too light or too heavy, its wireless performance, speed and accuracy is impeccable and the buttons are well laid-out and non-ostentatious. (Apparently the main buttons offer a 'better' click too, but I'll be damned if I can spot a meaningful improvement).

It's also ambidextrous, to the extent that the side buttons can be swapped to the other side (or even removed entirely and replaced with smooth surfaces). Said buttons, and the colour-shifting logo on its bum, can also be reprogrammed in software. Whole lotta mouse here, with a price to prove it. 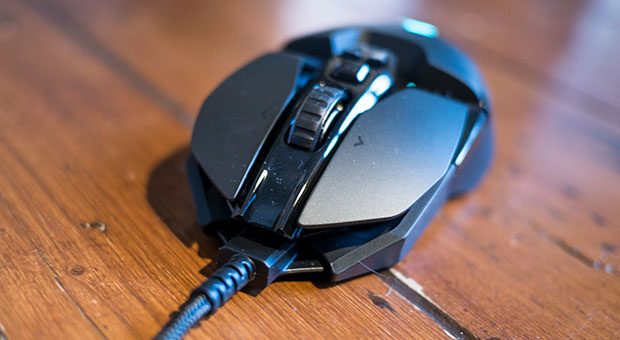 There's also the option to plug in a cable and make it wired, which simultaneously recharges the built-in battery and saves a few mid-game emergencies. However, this brings me to the 903's party trick, the separately-purchased Powerplay Wireless Charging System, which I should say up front requires an additional $100/£100 purchase (and yes, the exchange rate dickery there is scandalous).

It is difficult to justify spending the kind of money you might drop on a nice coat that would last you for years, or six copies of the 24 hour-long Twin Peaks Blu-ray boxset, on a mousemat. It's a magic mousemat for sure, but it also a piece of boring black cloth with a big 'G' written on it. 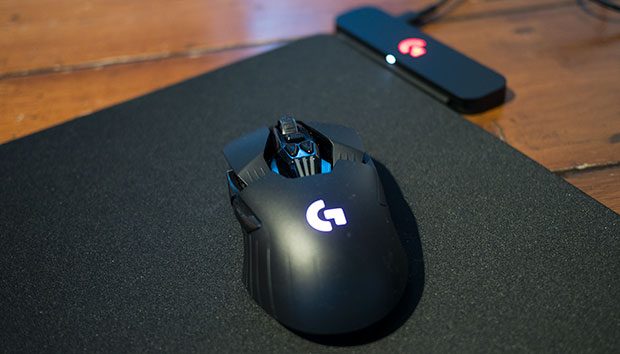 I'm in awe of what the Powerplay mat does, at least. It's one of those technologies that is simultaneously outlandish science-fiction and perfectly everyday, and I'm genuinely excited to see its future permutations. Essentially, it uses the sort of induction tech that you might have seen use for wirelessly charging smartphones, but in this case it pumps electricity back into the mouse as it moves across it.

To sweeten the deal, the slender, USB-connected block affixed to the top left of the mat/charger also contains a receiver for the 903, so you don't need to take up a second USB port with the latter's bundled dongle. It's extremely elegant, to the point that most people wouldn't realise it was anything more than an oversize (and inexpensive) mousemat. 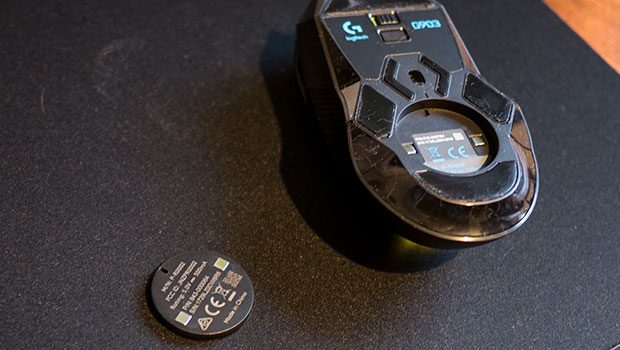 To work with this, the pad gives the 903 has a £2 coin-sized element (pictured above) that pops up out of the bottom with a pleasant magnetic click, or can be replaced with a weight if you don't have the pad or desire a heavier mouse. Again, the design is elegant, and it feels like one of those things that might be simply normal in a few years - but right now, the combined £260 price of the pad/903 combination is impossible to justify.

A £150 bundle - i.e. the pad provided 'free' with the super-high-end mouse - wouldn't be out of the bounds of sanity, but even so, I'd be more tempted by the the bigger-boned and slightly cheaper 703, which also supports Powerplay, though I'd have to attack its wheel-spikes with nailclippers.

The 903? It's a fine mouse in many respects, but it's very much a gamer's mouse, not one particularly well-suited to generalist desktop duties. As such the best-case scenario for me is that I swap between it and a normal mouse, which is messy, inconvenient and doesn't make best use of the traumatically expensive Powerplay pad.

I really do hope the Powerplay concept becomes the norm, offering mice and pads for all forms, functions and aesthetics, but the current combo of offensive pricing and uncomfortable proportions means, for me at least, that's a little while off yet.