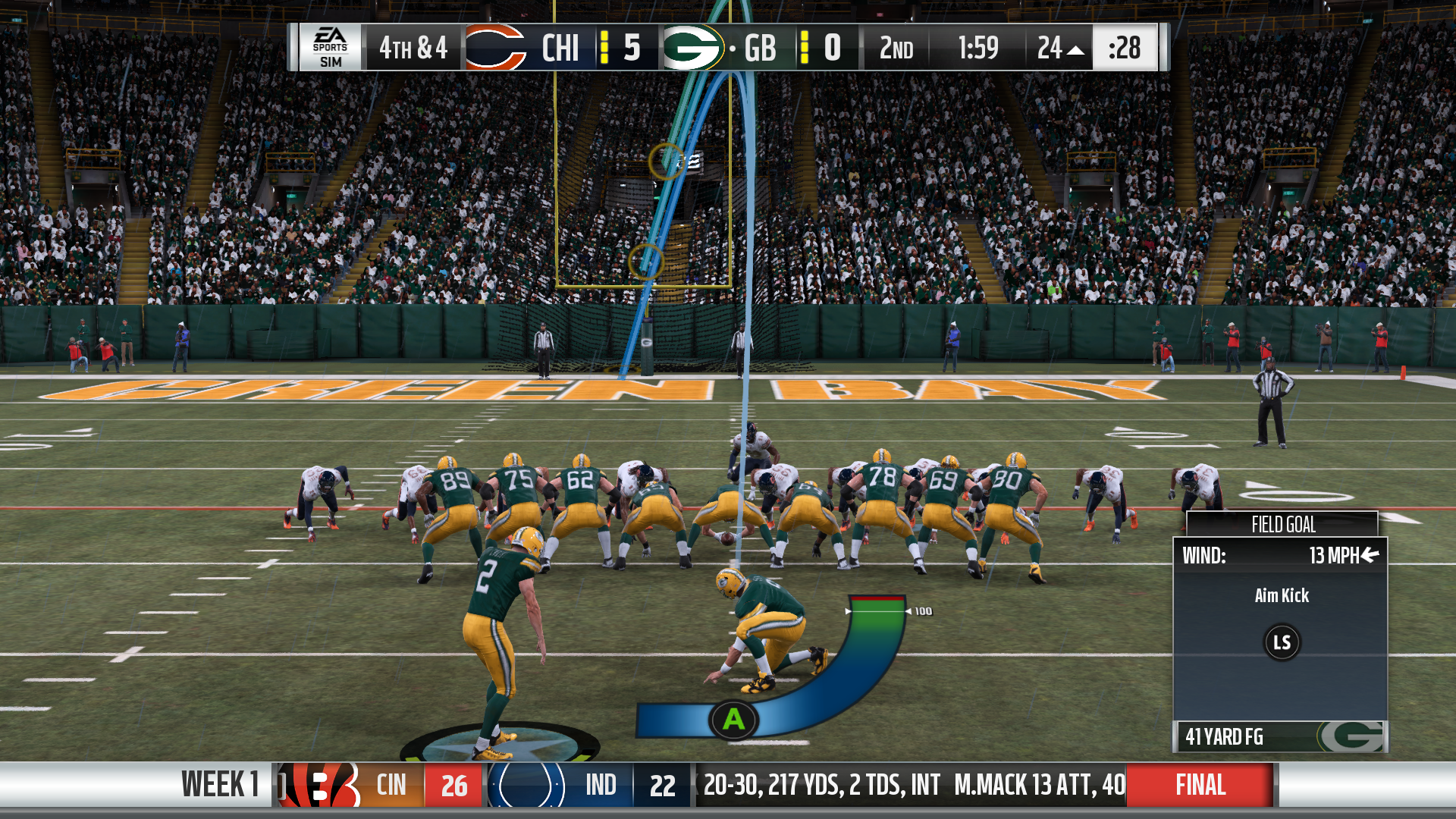 I’ve got a lot to thank the Madden NFL franchise for. My first copy of it was the 2002 edition, featuring Daunte Culpepper as cover star, Kerry Collins as quarterback for my now beloved New York Giants and a host of other athletes now labelled ‘vintage’. It was the perfect way to learn and appreciate the complex rules inherent to American football and it sparked an appreciation of the sport that has only grown stronger over the years.

Such is my respect for it, and because Madden enjoys a monopoly over digital editions of the sport, I expect a lot from each annual release. It’s a little disappointing, then, that this year’s edition, Madden NFL 19, adopts a feeling of conservatism; setting out not to lose as opposed to doing everything it can to win.

Let’s kick-off with the story mode, Longshot: Homecoming. As per FIFA’s The Journey, Longshot combines cut-scenes with on-field action and attempts to bring some sense of humanity to what is otherwise a clinical, mechanical interpretation of the NFL. 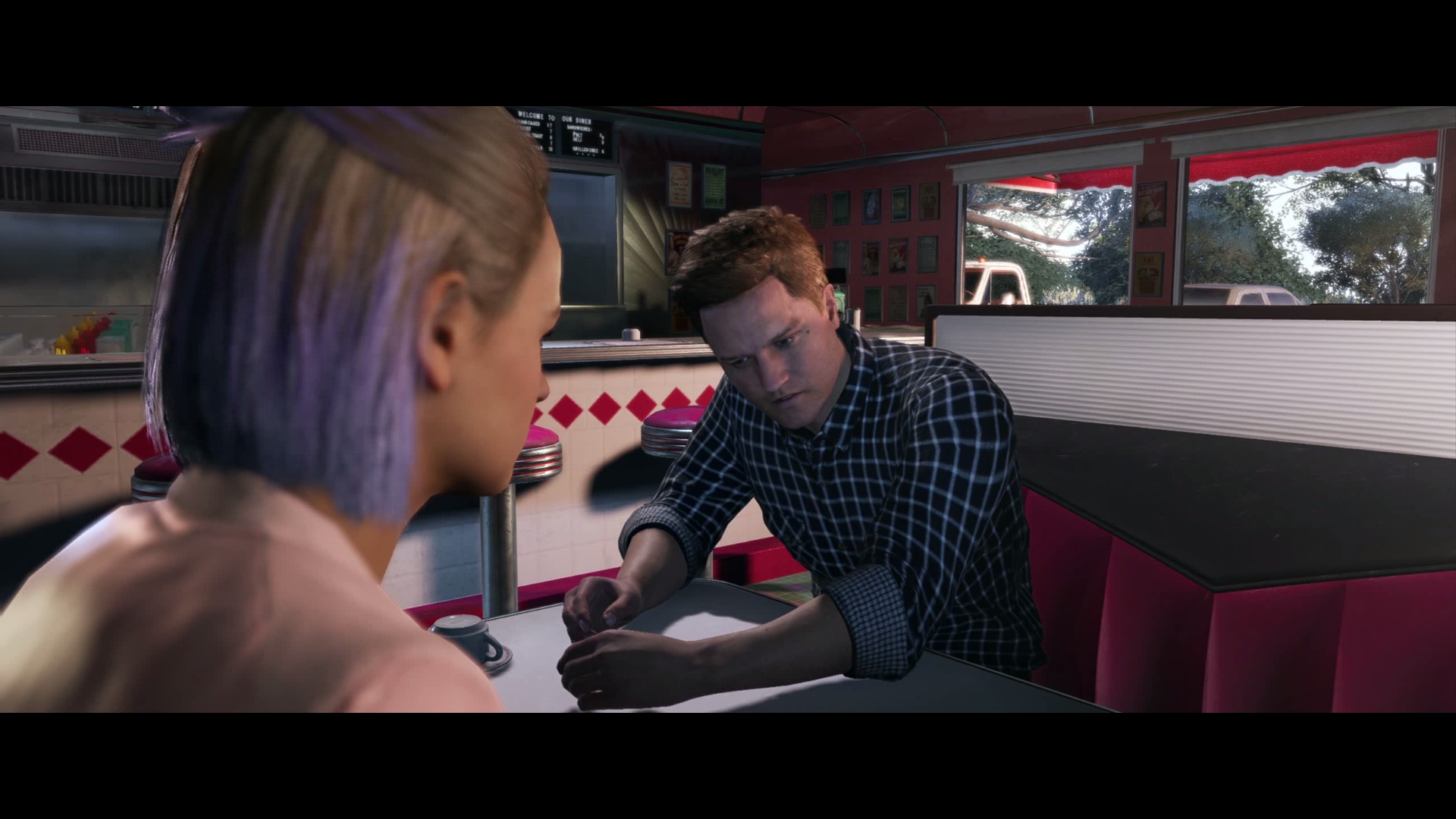 Colt Cruise and Devin Wade return as chief protagonists, although you’ll only be familiar with them if you played a console version of Madden NFL 2018, given that this is the series’ first PC outing since the 2008 edition. Their stories and those of the supporting cast are of the sort you’d expect from the Last Chance U or Hard Knocks football documentaries, albeit with a heavy dollop of saccharine, Hallmark-esque romanticism and naivety crudely dropped upon them from a height so great that it coats everything in sight.

Call me cynical, but it’s hard to take the leading stars’ quest for NFL greatness seriously when you’re sitting through scenes that rely quite so heavily on narrative cliches and deus ex machina in their attempt to present meaning and generate empathy. This is particularly grating in the presentation of mentor figures - the coach who is struggling both emotionally and physically, the estranged father - whose predictability makes them wholly uninteresting.

It might seem overly churlish to be too critical of a story mode packaged within a sports game, but I feel there’s real potential in the concept and, if Longshot were treated more delicately and it put greater faith in its audience to understand subtlety, it could make good on its goal. As it stands, though, it’s a novelty inclusion. 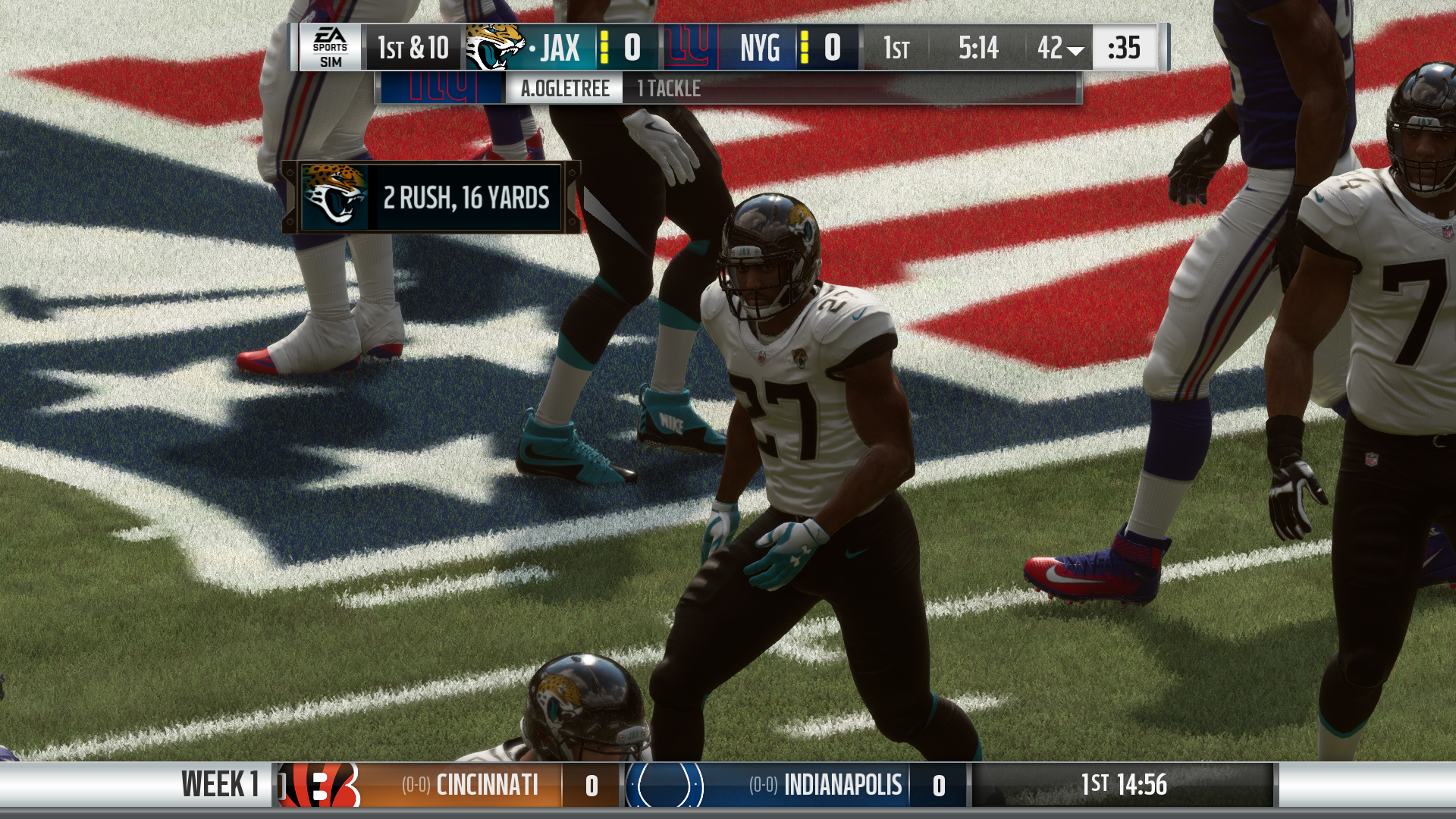 Better balanced is the core gameplay, but there’s little new to get genuinely excited about. An attempt to improve realism of movement comes in the form of ‘Real Player Motion’, which successfully allows you to make quicker, more decisive cuts and sprints in both offense and defense.

When handling the ball with your running back, for instance, you’ve greater ability to slide through small gaps between opposition lineman and linebackers, and to execute sudden changes of direction to evade defenders in the backfield. Depending on the strengths and weaknesses of your team, this goes some way to improving the balance of influence between the running and passing games.

However, it doesn’t eliminate the imbalance entirely. Passing down the field remains the best option for putting defenses to the sword and, as such, the overall, wider sensation projected from this year’s game remains very similar to that of recent seasons. Unless you’re playing as a team built entirely around the running game, it’s your passing options that you will want to master and practise above all others.

Those cuts and sprints available to the running backs can also be employed by your wide receivers and, such is their impact on proceedings, you’d be doing yourself and your touchdown threat a huge disservice if you didn’t seek to take advantage of them at every opportunity. Quickly cutting in one direction or another after catching the ball, followed by accelerating away, allows you to throw nearby defenders off your scent with incredible effectiveness. Perform it properly and there’s no way they’re going to make the tackle, whether you’re in the middle of the field or at the sideline.

Defenders’ ability to make similarly quick cuts has been buffed, but it’s the required reaction time that’s the problem. As a defender it’s difficult to know which direction you should be cutting towards until the opposition attacker has already made his move, and by that time it’s typically too late to meaningful respond. A guessing game ensues that puts the advantage squarely on the offense’s shoulders.The concentration on attack over defense does add to the spectacle in the short term and will likely satisfy players looking for a quick fix, but it undermines the potential for diversity of action and tactical approach over the longer term.

Visually, clear and meaningful upgrades have been made. Instances of bizarre player-to-player interactions during tackles have been drastically reduced, meaning fewer clown-like trips and falls and a greater sense that you’re engaging in a physical battle between two sets of superhumans. This has little to no impact in what you can achieve with or without the ball, but it certainly brings the quality of presentation closer to what you’d expect to see from an actual NFL broadcast. 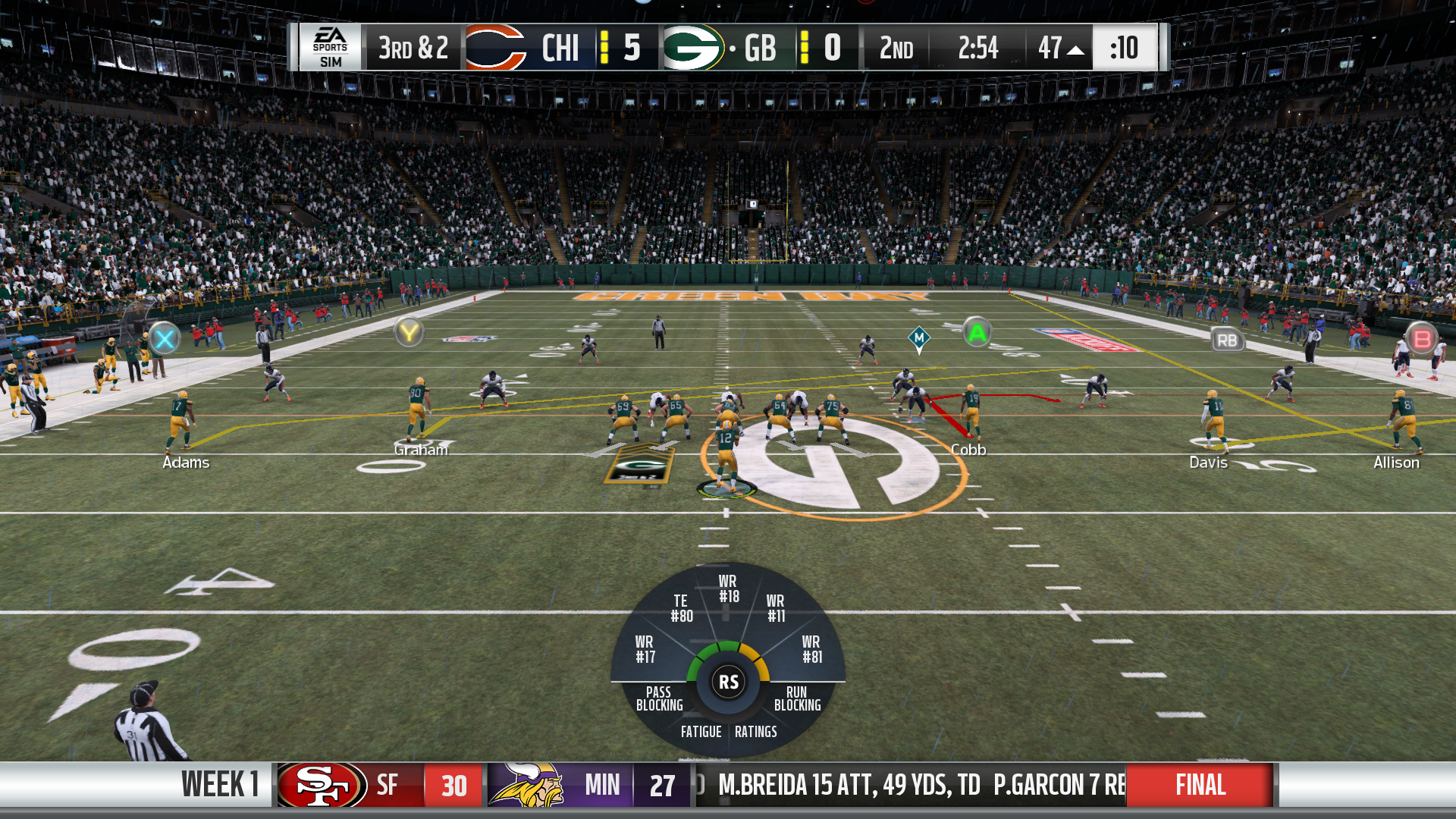 If you’re more interested in building a team than playing as one then you can jump into Madden Ultimate Team (MUT) and focus your efforts on collecting players in the form of playing cards that can be bought and sold. There’s greater emphasis than before on welcoming players who prefer to play solo rather than online thanks to the new Solo Battles option that pits you against CPU-controlled teams. The better you do against these teams in any given week the better the rewards you earn at the end of it.

This might sound like a perfunctory addition, but the highly technical nature of American football, combined with the complex, numerous inputs and systems to understand, means that the skill gap between evenly averagely good and bad Madden players can be huge. Through Solo Battles the ability to practise and improve, whilst participating meaningfully in the collectable-focus of MUT, now exists in an environment that is less stressful and sometimes demoralising.

There are ideas to celebrate, then, but this isn’t an entry that particularly excites or builds upon what we’ve already seen. If you love the NFL then you’re going to play this because of the lack of competition, but EA Sports needs to seriously think about how it’s going to evolve its Madden formula over the coming years. We can’t keep giving it the benefit of the doubt forever.

[Editor's note: I'm going to level with you, reader, so here's the deal: I got back from Gamescom and spiralled into a massive panic because I hadn't organised a review for Madden 19, the first Madden on PC in a decade. I did organise one, but, see, what had happened was, I forgot what month it was for a few days. But I still think running this review is worth it for a PC Madden game, so fill yer boots.]