Premature Evaluation is the weekly column in which we explore the wilds of early access. This week, Fraser's running away from sea monsters and hunting down galleons in nautical battle royale, Maelstrom.

I wasn’t a happy pirate. I wasn’t any kind of pirate, really; not with only a series of failed fights and a major lack of booty to my name. It was all a little embarrassing. So when I saw the Dwarven ship on the horizon, there was a storm brewing inside me, and I pointed my shark-drawn Orc ship at the stumpy corsairs and increased speed. Wood and metal and, of course, shark collided, followed by a barrage of cannonfire.

This would be it. I knew it. My first victory in Maelstrom. 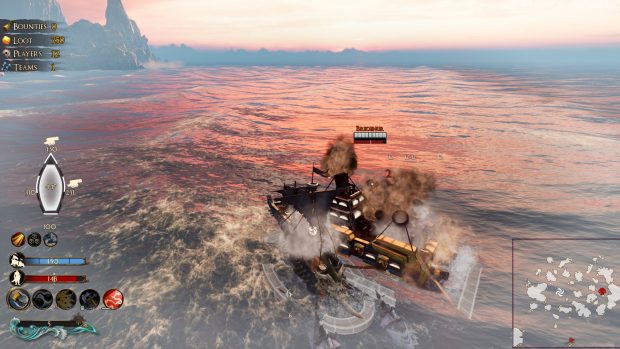 The Dwarven ship was looking worse for wear and I was just lining up a shot on its starboard side, where I’d smashed up all of the armour, when some Johnny-come-lately swans out of the mist, immediately firing at both of us. Quickly the duel became a mad tangle of ships and ropes as we all slammed into each other and tried to board.

I managed to extricate myself and lob some cannonballs, finally sending the Dwarves for a cold swim. Battered and bruised I wasn’t looking forward to another fight. That’s when it dawned on me to do something I hadn’t attempted before: leg it. I pinched the loot and cut through the water, as fast as I could, leaving my surviving enemy in my wake.

At least I thought that’s where I left them. 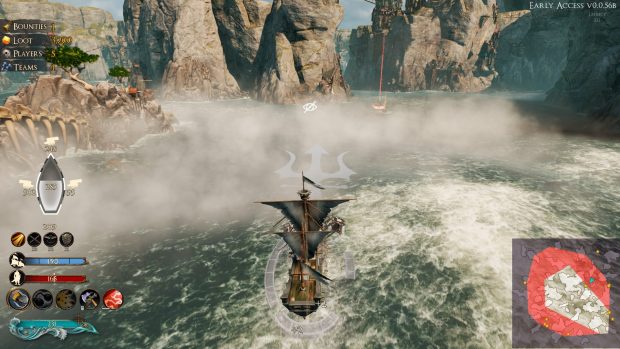 With sea monsters closing in, our naval battlefield was shrinking, making me aim for the centre of the safe zone, taking me right through a narrow corridor with huge cliffs on either side. I’d already committed myself to the course when another ship appeared, heading in the opposite direction. Right for me. I impotently tried to turn, crashing into the rocks. After a painful 180, I came bow to bow with my old rival. Sandwiched between the two of them, there wasn’t anything I could do. And Orcs, unfortunately, aren’t strong swimmers.

Maelstrom’s a nautical battle royale, pitting fantastical ships against each other in damp arenas. The ships are fast, the cannons are powerful and there’s no risk of being sniped by some invisible bastard. It’s lovely. It manages to fit all the looting, ambushes, chases and the looming threat of the shrinking play area into brief matches that are frequently over in ten minutes 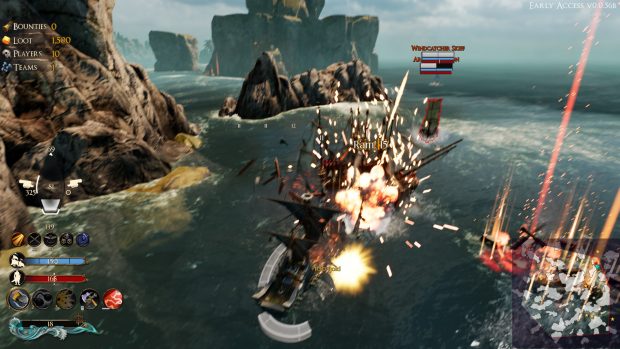 Replacing people with boats is, at this point, enough to make it stand out from the rest of the battle royale lot, but it’s not just a twist; there’s a clear effort being made to take the nascent genre in a different direction. It takes a few cues from MOBAs and MMOs, too, shaking up the routine of looting and hunting players.

The playing field isn’t even, for instance. There are three different factions and nine ships, each with special abilities and complexities, while cash earned by playing can be spent on levelling up said ships and slapping new components onto them. Matchmaking doesn’t provide any information, so I’ve found it hard to tell if I’m struggling to take on an enemy because their ship has strengths I don’t know about, they’re a higher level than me or if I’m just not the best captain. 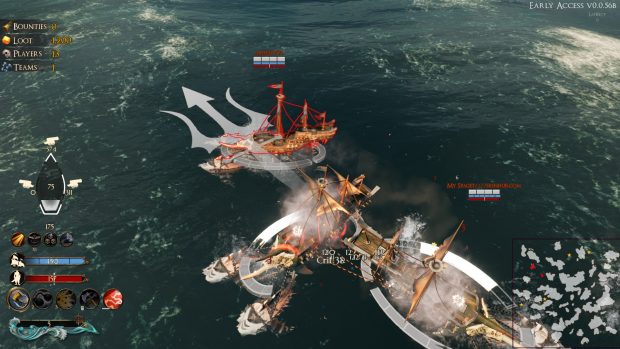 New players level up quickly, however, and the game is generous with its cash, doling out lots of loot on top of what you dredge up from the water. After a few terrible performances, I had enough to level up my ship a few times and deck it out with new equipment and crew. And it does feel like playing to your ship’s strengths makes a lot more of a difference than a 5% increase to your reload speed.

It’s strange how playing boring, interchangeable characters entirely at the mercy of RNG became a battle royale mainstay, and I’m absolutely not missing it in Maelstrom. You still grow more powerful as the match progresses, defeating other players and NPC ships to get power-ups, but you don’t start as a blank slate. One ship does most of its damage by getting close and boarding, while another is built for ramming and running circles around its foes. They don’t have roles, per se, but definitely favour different playstyles. 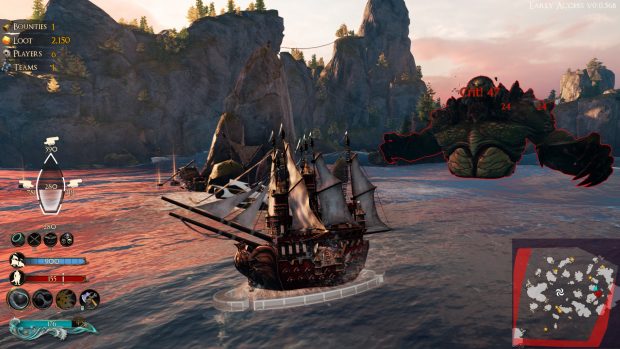 How you approach a fight depends on your type of ship, but it’s largely a matter of chiseling a hole in the other ship’s armour by focussing your attack on one side. Ships have different weak spots and tricks up their sleeves, however, so you can’t just blast away. You might be merrily charging at an enemy, only to sail right into an explosion they set off, pushing you back and giving your prey a chance to turn the tables. You’ve got to watch out for grapeshots and chainshots, too, which target your sailors and sails respectively.

Maelstrom keeps things brisk by making its arenas small, and its ships are able to get from one side to the other in a couple of minutes. It packs a lot inside them, despite the absence of wrinkles like buildings and elevation. As well as the aforementioned NPC ships, there are whirlpools that can suck your ship down into the depths, sea monsters that can smash your ship into twigs and fog that can hide ships waiting to ambush you. It’s a menacing sea and not the place for a friendly regatta. 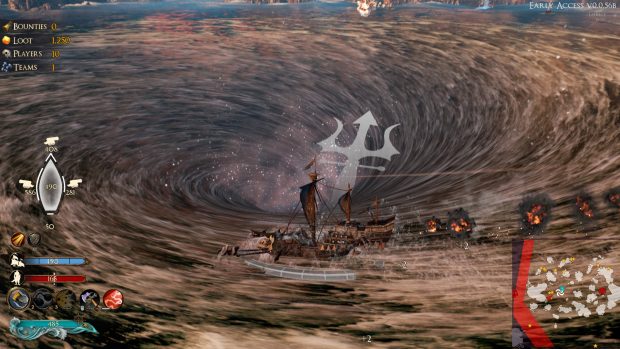 It would probably be a nightmare to fight in these ocean arenas if the ships handled at all like ships, but thankfully they don’t. They’re bath toys, gently sitting on the water, ready to scoot across the place with a bit of a push. You don’t need to worry about sails, tacking, jibing or even what the wind’s up to -- it’s all about quick maneuvers and pummelling every other ship you see.

We’re going to be seeing a lot of Fortnites over the next few years, but I think I can weather the storm if we get a few more Maelstroms too.