We all remember A-day. The infamous day in US history when San Francisco came under attack by skull-faced bad dudes, and the Avengers showed up to stop them. The superheroes flew in to display their skills at bash ‘n’ dash combat (almost as if this was a demonstration for the press). There was Thor, Iron Man, and Black Widow, all fighting goons. It was exciting and explosive. But something was off about the Avengers that fateful day. They just didn’t seem... themselves.

I’m talking about the fairground ride faces of the recently revealed Marvel's Avengers. I asked creative director Noah Hughes of Crystal Dynamics if he thought people would be happy enough to see a Hulk that doesn’t look a jot like Mark Ruffalo. He said inspiration comes from “a breadth of Marvel content”, not just the movies.

“We’re always pursuing the truth of the subject matter,” he said.

“When we set out to make the game we took inspiration from a breadth of Marvel content that had come before… we’re always pursuing the truth of the subject matter. Theses heroes really need to be the heroes that you know and love but it’s exciting to see them taking on new adventures and interpreted in new ways.”

We’re speaking after a hands-off demo which showed off the powers of all your favourite superfolks. It was an action-stuffed sequence, worthy of any blockbuster. First Thor was throwing his hammer and pulling it back, smashing obstacles out of the way with thunderous relish. Then Iron Man zapped some ground troops with a hot beam from his heart. There was a taster of the Hulk too, who flapped henchmen about like dolls in a scene reminiscent of that bit with Loki. Then he threw a truck into a tank using the power of a quicktime prompt.

Captain America was there too, biffing bads and throwing his shield which would bounce around the room and hit multiple folks. Black Widow showed up fairly late, doing some more quicktime bashing. She can shoot her pistols, between kicks and dodges, and batter her foe to a pulp with a pair of tonfa, even as she chatters in that superhero exposition way to the villain of this dastardly attack. Here he comes to unveil himself. Of course! It’s… [squints at subtitles] Taskmaster?

“I think one of the things we’re excited about,” said Hughes, “is bringing heroes and villains into the game world over time that people are less familiar with.”

Taskmaster hasn’t been in any of the movies (at least, not yet) so schmucks like me might not know him. We might not also know Abomination, another baddie destined to show up in the game at some point. And this makes us frown at our big bag with the expensive “A” logo on it, and wonder whether what we’re holding is the real thing. 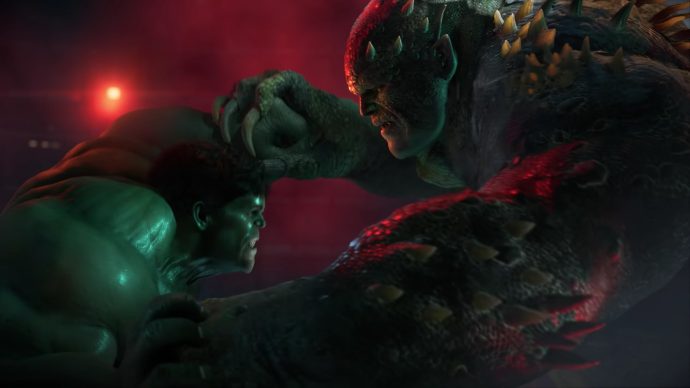 That’s a normal response. But it’s also probably a silly way to look at things. Yes, it’s hard to hear the phrase “pursuing the truth of the subject matter” and not immediately dismiss this as long-winded spin. After all, it is more likely that “branding” issues, costs or a mix of factors got in the way of whatever deals were needed to secure the likenesses of actors such as Robert Downey Jr or Scarlett Johansson (if this idea was not simply rejected at an early stage to avoid the headaches that would inevitably arise from such deals). However, there is a sensible and human point buried somewhere deep in that eyebrow-raising PR line.

Slightly “off-brand” games based on licensed super-franchises are nothing new. A Spiderman game came out last year with a poundland Peter Parker and nobody gave a hoot. The development team on Avengers worked closely with Bill Rosemann of Marvel Games, who headed that Spidey game, and the feeling is: so long as you adhere to the comics, there’s actually a lot you can do with these big dumb biffing experts.

“[Rosemann] understands both the game side of it and has an encyclopedic knowledge of everything Marvel,” Hughes told me. “So it’s great to have partners like that to achieve that goal.”

Plus, there is nothing really that wrong with giving a character a new actor. Hello to the 12 James Bonds. Hello, 50 billion Batmen. The only reason the unfamiliar noses and cheekbones of Captain America and Bruce Banner seem especially odd is because the Avengersverse movies have been dominating cinema for years. It feels too soon. The contrast is too sharp. And it’s funny (it really is). There’s something undeniably chucklesome about seeing Otacon from Metal Gear Solid playing the Hulk, or hearing Travis Willingham’s questionable English accent as Thor (as opposed to Chris Hemsworth’s questionable English accent). Square Enix’s pushing of the voice actors into the spotlight during the game’s reveal also seemed a bit “let’s get ahead of this shitstorm lads” in a way that also invites ridicule. 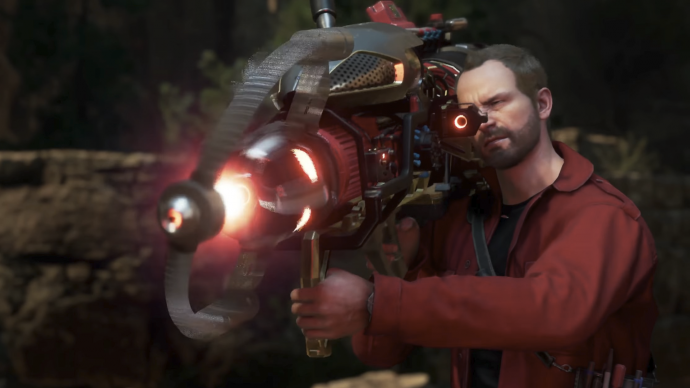 But it’s also probably misguided to think this way, and the more we keep chasing some kind of “authenticity” from our dumbass artform the less likely we are to get something even faintly interesting or original from one of the most formulaic genres in recent history. I’m not saying Marvel's Avengers is going to be the superhero story to deliver unparalleled originality. The demo basks as comfortably in its quippy hero dialogue as it does in the light of its own explosions. But if we can’t even deal with a Black Widow who doesn’t look like the Other Boleyn Girl, we’re unlikely to accept change when something slightly more disruptive and interesting happens. Like the gang failing to save the day.

“We wanted this story to feel like the beginning,” said Hughes, when I asked about the post-defeat setup for the game’s tale. “And by that [I mean] it’s not an origin story for the Avengers - these characters have been avenging for a while in our world now - but by creating a situation where the world is without the Avengers when it needs them most, it puts the player in a position to reassemble that team and feel like that’s their Avengers by the end of that journey.”