If you click on a link and make a purchase we may receive a small commission. Read our editorial policy.
Developer: Piranha Games
Publisher: Piranha Games
Release: Out now
On: Windows
From: Epic
For: £40

I was not sold at first. The opening two hours of MechWarrior 5: Mercenaries are, well, they're fine. Standard tutorials, taking you through the controls and basic concepts, plus some entirely standard "oh no the baddies killed the man, grr" plot business. I was wary, fearing it would be a forgettable linear fairground ride about Corporal Jack Magnum (I honestly can't remember my character's name) getting revenge on the... guys, for killing his dad, who... existed.

Then it opened up some more, and got a bit better. More options appeared, more concepts were dropped in, and it got better again. That was how it went, over and over. Mechwarrior 5 started out fine and just kept getting better the more I played it. My complaints about it are mostly minor, and the big one is more of a lingering doubt than a real problem. Overall, it's safe to say that, after a very long break (and discounting the underwhelming MechWarrior Online, the definitive stompy romp series is back. 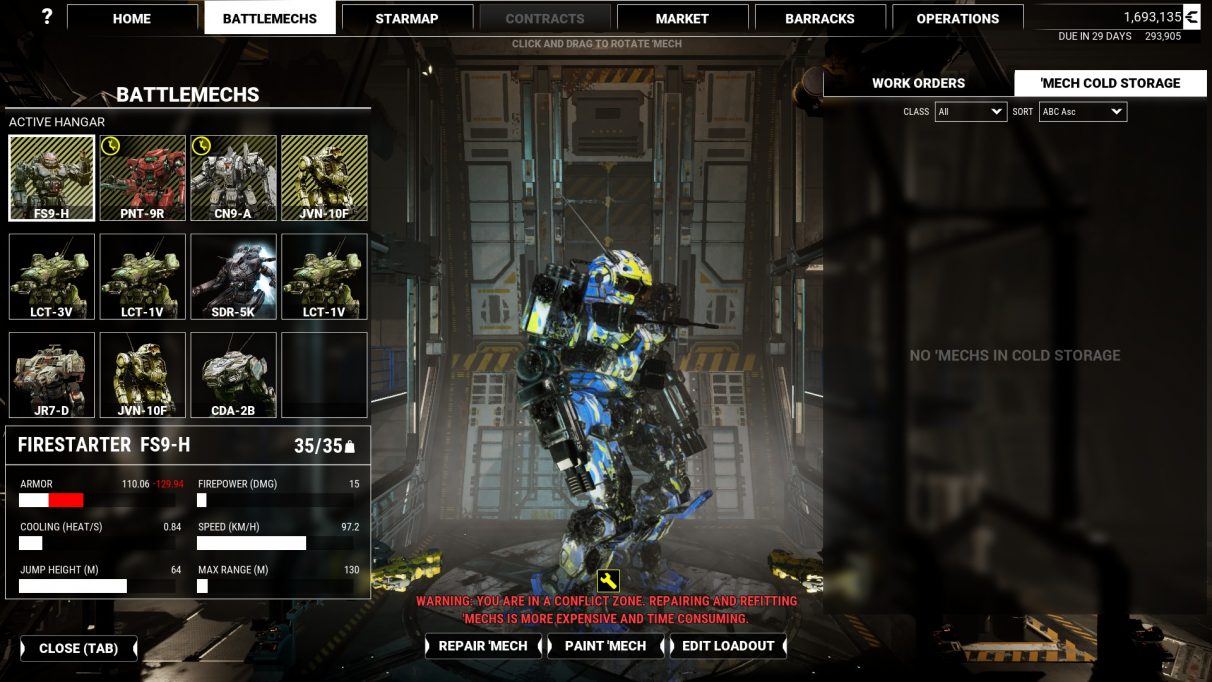 The premise is in the title. You run a mercenary company, hiring out your mechs among ten factions. Ultimately, you want to track down and defeat the evil dadkillers - who are also mercenaries, but like, baddie mercenaries. Even so, you can just run contracts indefinitely, and they make up almost the entire game anyway. Each contract involves blowing up another faction's mechs, tanks and buildings with up to three other hired pilots, or occasionally the worst thing: defending a base. Ugh. I'm a mech person, why would I want to NOT smash up buildings? Come on.

Success in missions means cash, salvaged weapons, and changed relations with each side involved. It's worth courting high opinion, since doing so results in market discounts and - at high levels - access to exclusive, souped up 'hero' versions of mechs. Interestingly, barring a few places where you have to pick a side, factions are very forgiving if you fight them. Relations aren't zero sum, and I got very friendly with one while only partly alienating their rivals, plus the pirates and bandits I fought. You're mercenaries, so they kind of expect this sort of thing. This is probably for the best, because most contracts in a region are offered by only one or two local factions, and the map is enormous. 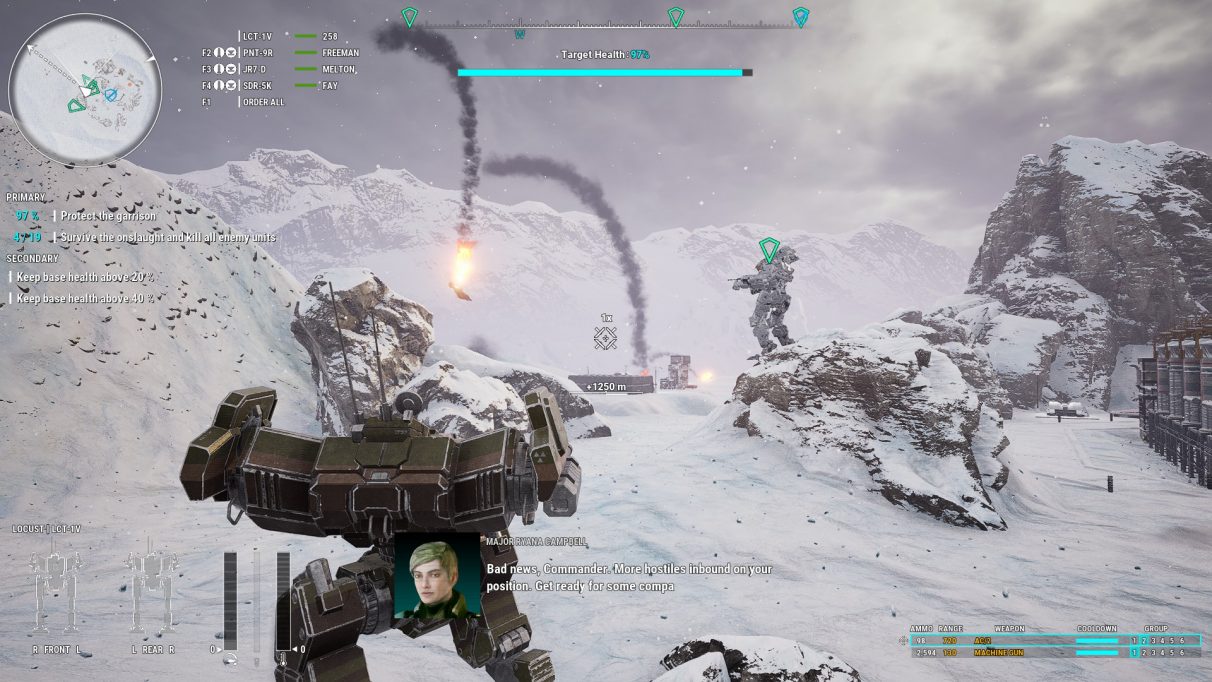 The other advantage to chumming up with a side is contract negotations. When offered a job, you're given negotiation points based on the opinion of the employer. You can put these into getting a higher payout, a bigger share of loot, or better insurance coverage. The latter tends to increase in higher increments, but you only get paid based on the damage your mechs sustain. Salvage is a crapshoot, but helps with stocking up on guns, and with enough points you can sometimes get a mech out of it without paying the market price. It's a simple system, but it adds a welcome extra bit of decision making when taking a job, and it helps sell the feeling of running a business. 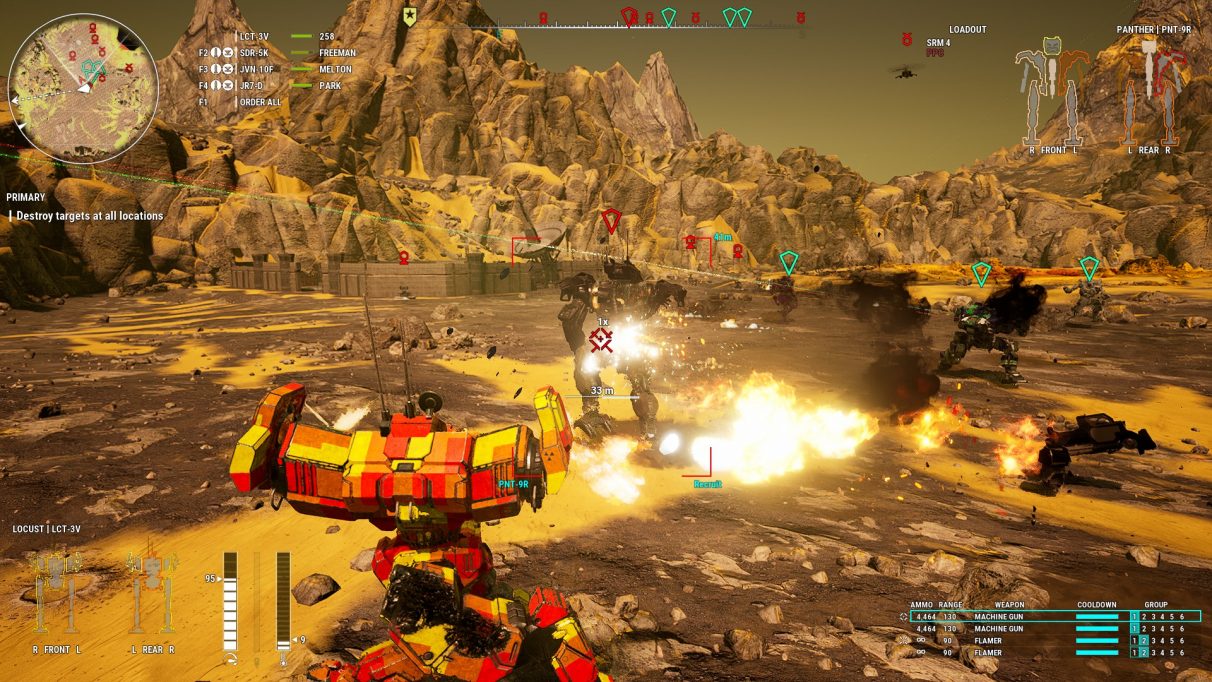 That's something Mechwarrior 5 does really well. You're not bogged down in pedantry, but the day-to-day operation the outfit is not a trivial job. The gradual accumulation of more and better mechs leads to interesting decisions about repairing them or selling them off, and keeps the focus on managing your money well enough to make jobs actually worthwhile. Repairs in particular take lots of time and money. They're particularly pricey in the warzones where all the jobs are, but they're faster and cheaper if you fly out to safe industrial hubs. There are also better weapon and mech markets at the hubs, so once you own more than a handful of mechs, you'll find yourself on campaign, weighing up whether it's worth paying to fly to a cheaper system, or risking one more mission with four fragile light mechs first. Or perhaps you'll decide to fix up those Blackjacks now, hoping the contract will pay out enough to make it worth the expense.

All of this is also, of course, an incentive to avoid damage in battle. Which brings me on to... battle. And this is where the big question comes up: is it fun? Well, yes. Absolutely. Mechwarrior 5 looks spectacular in every fight, and plays almost as well. It doesn't, I reluctantly admit, nail the feeling well enough to totally silence all criticism, but it does a damn fine job. 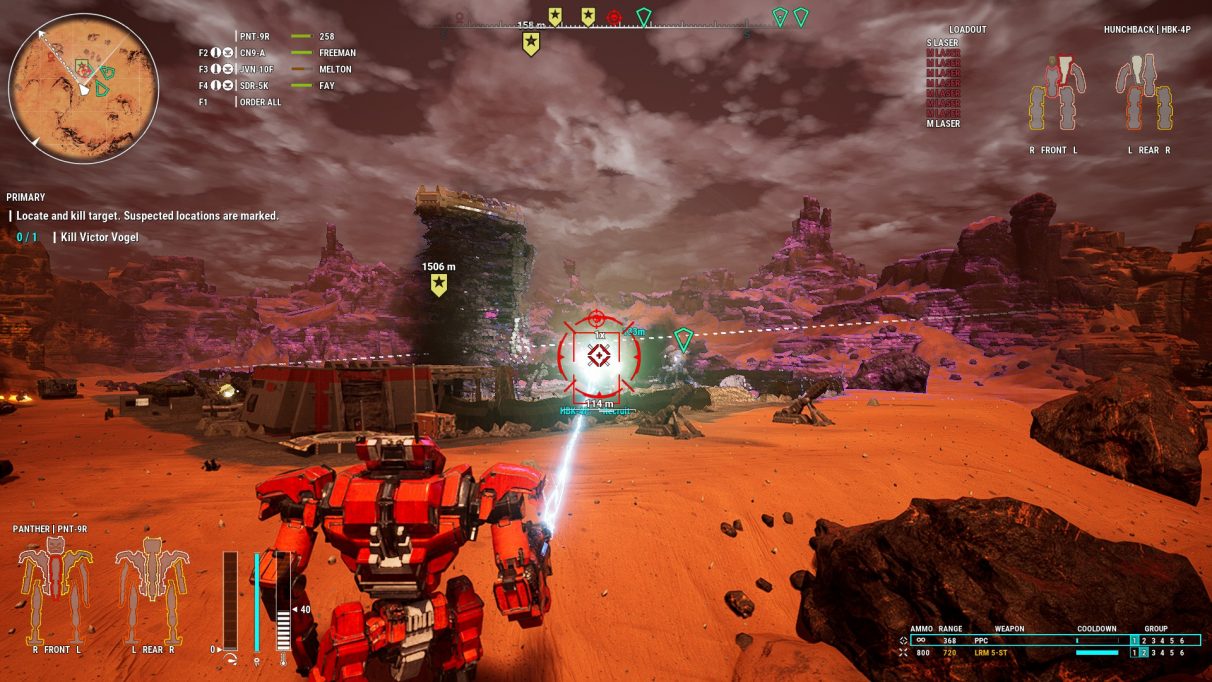 Let's crudely simplify the entire genre into a scale running between Arcade and Simulation. On that spectrum, Mechwarrior 5 is basically a centrist. I worried, Imlac-style, that in trying to be both it might satisfy neither, but it works hard enough to pull it off. Mechs are steered with WASD from the waist down, while the mouse controls their upper parts. You can tap F or C to reorient your legs' direction towards your aim or vice versa, and mouse and/or number buttons fire off weapons. As you'd hope, weapons can be grouped together however you like, either on your dropship homebase, or in-mission. Each weapon can be used in multiple groups, and fired in synch or in sequence. It's all here.

The mechs are lovely, and external damage effects look absolutely fantastic - lasers trace hot glowing lines across armour, exposed arm sockets spark, and mangled legs cause bots to limp. Burst cannons are particularly sexy, and though there are no explicit sniping weapons, a careful aim makes tactical dismemberment of enemy machines viable. The slower bots, in particular, can be vulnerable to headshots. During our co-op adventure, Astrid jumped in a giant bot with dual blasters so powerful they visibly distorted the air around their impact point, and caused her to overheat and shut down after a couple of shots. 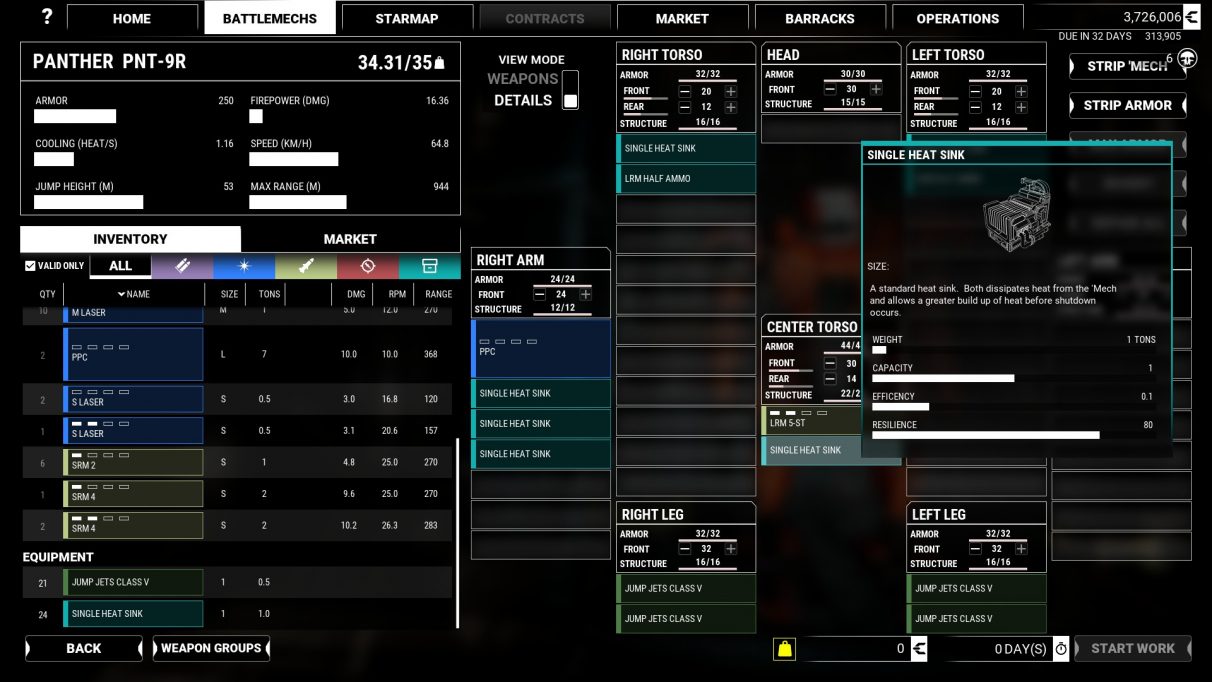 Between jobs you can rejig armour to protect or sacrifice specific body parts. I tend to strip most rear armour from my favourite mech, because it's so fast and manoeuvrable. As I jink behind tanky mechs, chipping away at their legs with bullets and hosing them with flamethrowers, it rarely gets hit from behind, so I didn't need too much plating there. And just as with your enemies, it matters where you take damage. Ammunition stored in the torso can explode and hurt you, a lost arm will cost you any equipment installed on it, and your AI backup, who does a decent enough job, can be injured too, or even die. Frankly, they're easily replaced - but they can gain skill in weapon classes, heat management and such with practice, so it's not ideal to lose them.

It could be more sim-y. Although the cockpits look great (one is very cheaply made, and has a collection of fire extinguishers, and post-it notes taped to the controls), that nebulous sense of being in the seat is weaker than I'd like it to be. Taking damage in particular gives much less immediate feedback than delivering it - the HUD flickers, but it's mostly around the edges where you aren't looking anyway. I'd have preferred it to ditch this style for something more mechanical - I'll take sparks flying over a flickering hologram any day. Although it's rarely a problem, I managed to lose an arm without realising it more than once. 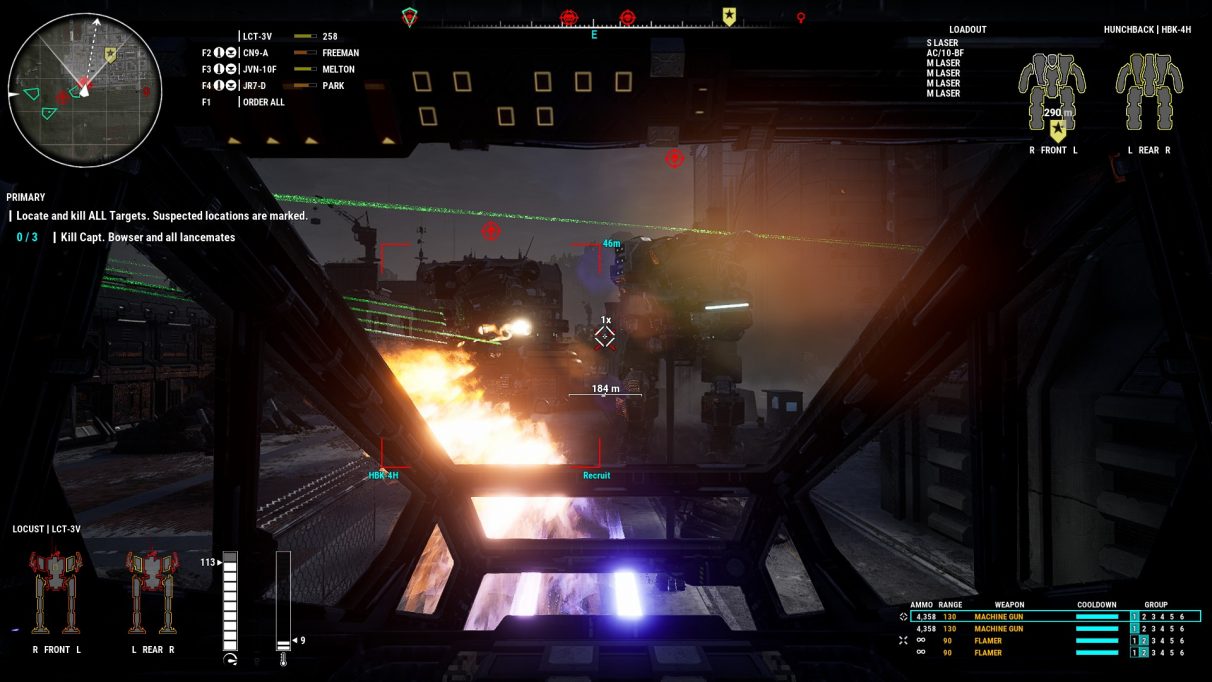 I have more nitpicks - the salvage screen lists few details about what weapons or mechs you're getting. It could use a test drive and a firing range option. Pilots will report the loss of irrelevant equipment in the same way they report losing all their weapons. I like that the pilots are a little bit chatty (and one in particular sounds like Korolev from Hostile Waters, a very welcome parallel), but you can do very little to control or interact with them beyond "attack my target". A more thorough, interactive mission map would be handy. I want a 'repair all mechs' option.

But this is all outweighed by a contrasting list positive details. The corners of your windscreen are slightly frozen on ice worlds. There are maps with big rusty red lakes. You still get a full payout if you complete a mission's objectives, but get blown up on the way to evacuation. There's a market tab on the 'equip mech' screen so you don't have to go back and forth too much. Your mechs, and the scale of them, are visible in your ship's hangar between jobs, and you can even walk around in there for no real reason other than to make it all feel real. Each mission even starts with your mech turning and walking out of that same hangar. One of the mechs has six flamethrowers, and machine guns for boobies. Both Astrid and Dave have remarked that the Urbanmech is terrible, but it's sort of meant to be - and I like that it's an option anyway for the stubborn.

All my complaints can be brushed aside, is what I'm saying. All except for one, which is that I'm unsure how well Mechwarrior 5 will hold up in the long term. Its instant action mode lets you pilot anything on custom battles, so it's not ungenerous. Its campaign mode is truly vast, gradually unlocking more stuff over hundreds of battles. Even so, the missions are all much the same thing each time, with the mechs involved, and sometimes the terrain, offering the only real changes. 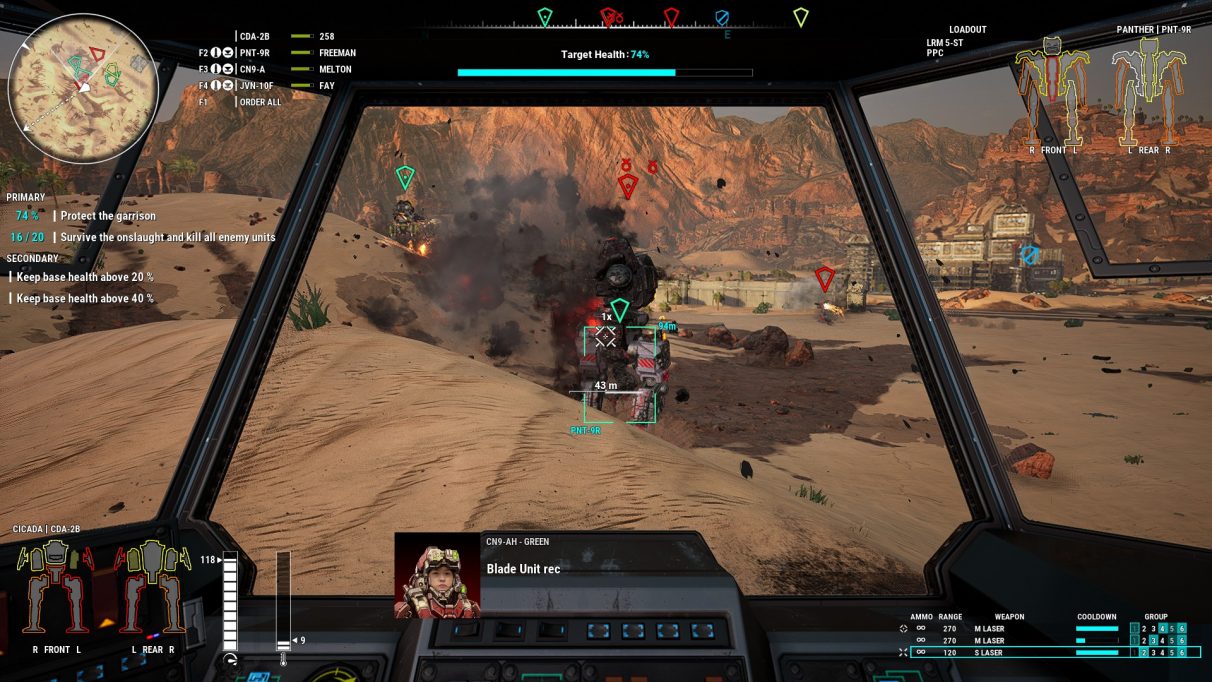 But... well, that's okay? The campaign's context makes me pilot more mechs, try more weapons, and get more excited when new mechs are available. A solid mech-blasting game doesn't have to offer endless scripted missions or a worthwhile storyline. I've had a hell of a time, whether it's been cackling with glee as I sniped an enemy's robo-arms off with my gauss gun, lasering up an entire opposing base, or running rings around a lumbering heavy six times my size while piloting a Locust.

I will be playing more of it. I will, in fact, probably look for excuses to play it at work when Alice is distracted. If you've been waiting for a full-on simulation with all the bells and textbooks, and nothing less will satisfy you, Mechwarrior 5 isn't going to cut it. For everyone else though, it's bloody excellent.