The third death was probably the most painful. Not pain in the normal sense - I can’t feel what the little armoured swordsmen of Mount & Blade II: Bannerlord [official site] feel - but the pain of a shameful defeat. I’ve just had a go at TaleWorlds’ upcoming swordfighting-meets-strategy-meets-RPG at Gamescom. Sadly the singleplayer was off limits, but I did get to do some medieval multiplayer mauling. I was stabbed soundly and repeatedly, in case you were wondering, left to die in a pool of blood on the hot sand of a desert map. At this point I would just warp into another soldier. He too was often killed.

The Captain mode we played (my two unfortunate teammates and I) is similar to the “Captain Team Deathmatch” of Mount & Blade: With Fire And Sword. (Or so I’ve been told. I haven’t played the multiplayer of the previous games in the series, so I’m unable to say exactly how much has changed, sozzles). Basically, you are the captain of a single squad of troops, all identically armed. Head angryman of a dozen or more berserkers, for instance. Point man for a band of archers, top horse friend, the big stabber. You can command these troops on the field, yelling out orders as you swing your own axe or make your way toward the enemy in the distance. Follow me, form a line, face the enemy, form a shield wall, spread out, advance, charge, retreat, stop dying, please, retreat, retreat.

In this match it was our three captains versus three captains on the other side of the room. The objective is to either wipe out the enemy team entirely, or control the flag points placed in different parts of the map - one on a ridge, another nestled among some huts, another, I don’t know, somewhere else. The flags move positions periodically, to keep players from hunkering down in one place and just farming points without ever getting their feet mucky. They also disappear, eventually leaving only a single flag where the fight will presumably become focused when fighting in more strategic and less sloppy battles than ours.

It’s as Mounty and Bladey as you can get. The swordfighting is hazardous and hard to grasp at first, just like I remember, but rewarding when you do time that killer blow just right, or de-horse a light cavalryman who thought he’d charge the line in a fit of dumb courage. There’s always been a bit of chaos to the strategy here, and that seems only to get amplified in multiplayer. As an unpracticed player, ineffectual spear swipes are more common than “I-can’t-believe-I-just-did-that” cavalry charges, but when the latter does occur, it feels heroic. As befits expectation, it can feel janky in rare moments, because soldiers do sometimes still “phase shift” to one side as they get shoved with force, like weird teleporting crabs, but even this felt less noticeable than I remember it in Warband.

The hardest thing is the commands system, though it will be recognisable to veterans. Each order given to the fighters in your charge takes a couple of keypresses, and it does take memorisation. In the heat of a face-off, it’s hard to keep referring to the cheatsheet of commands that pops up on the side of the screen. Far better to learn which combo forms a circle, or tightens up the formation, or forces all your troops to form a meat shield around your own frail, limping character. But these tactical barks are where the fun of these battles has always come from, I feel. With three or more players who know how to handle the function keys and communicate well, skirmishes could be long, thoughtful duels between opposing military machines.

My team was defeated after I ran away on a horse. 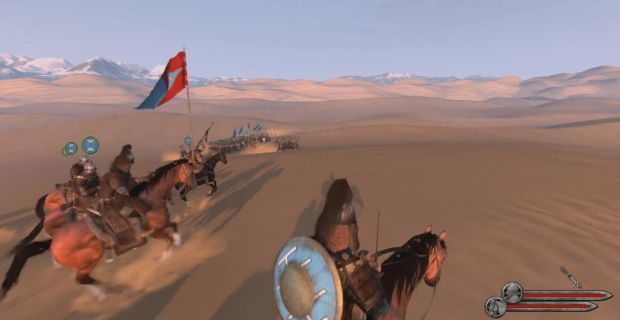 But there were better, fightier moments. After fumbling with the command menus I finally narrowed down the keypresses needed to make a shield wall. A charge of light cavalry came at the men but we held fast and managed to cut them slowly down with each subsequent pass they made. Of course, that’s when the archers flanked us and the enemy infantry closed in, with extra-large shields granted to them by a perk-like system presented to you between rounds. Some perks let you give your fellows an extra spear, others make them more heavily armoured, or give them the ability to cleave shields, or simply make them better at sticking their boot into a guarding foe. These seem to differ according to class. Archers, for instance, were the only soldier type I noticed with a “lightfoot” perk that made them faster runners.

Like I say, I can’t tell you how radically it has changed from previous multiplayer, and I don’t yet know what other modes (if any) are planned. My gut tells me this is less of a revolutionary new focus for TaleWorld’s and more of a vital refinement of the multiplayer mode that people remember most fondly from With Fire And Sword (the real thing I want to see from it is the singleplayer world and any new features that allow you to kiss the hand of the Khan, but we’ll probably have to wait for that).

We’ll try to discover more details as Gamescom goes on, peering into the tea leaves left behind by TaleWorlds’ CEO, Armagan Yavuz, following an interview. For now, be sated with the knowledge that Bannerlord retains, at least in the multiplayer bouts, the same hectic tactical brawling that makes the original both daft and enjoyable. And if any of you know how to get sand and blood out of your trousers, call me.