If you click on a link and make a purchase we may receive a small commission. Read our editorial policy.
Premature Evaluation is the weekly column in which Steve Hogarty explores the wilds of early access. This week it's space station build-and-manage-'em-up Meeple Station.

Meeple Station is a game about building a space station and keeping its residents alive, a task made all the more challenging by those residents having each been cursed with simulated emotional states, which can become so fraught that they’ll hurl themselves out of an airlock rather than face another second living aboard your creation. So, more accurately, Meeple Station is a game about convincing little pixel people not to fatally catapult themselves into the void.

Anyone who’s played Dwarf Fortress will know what’s going on here. This is a colony simulator, except rather than digging down into the dirt, you’re setting up shop among the isometric stars. You construct sleeping quarters for the crew, a dining area with enough seats for all the space bums, life support and power modules, solar panels and cabling to connect it all up. You build fancier bedrooms for the capricious ranking officers, furnished with such incredible luxuries as plant pots and desks, to keep them from flying into a rage and demanding that random bits of the station be disassembled. It’s a system that will be achingly familiar to anyone who’s ever had to indulge the whims of dwarven lords. 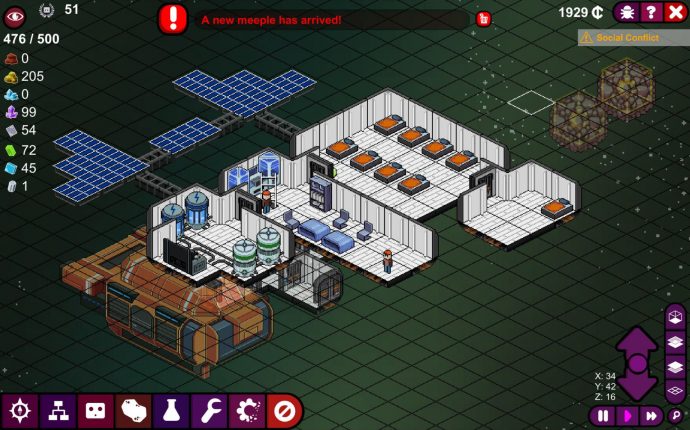 Each meeple (merson?) has a personality that determines how suited they are for each of the station’s roles, and how well they’ll get on with other meeples they work with. Meeples are unwitting slaves to the unchangeable motivations they are seemingly born with, which is either a clever reference to the philosophy of Sigmund Freud, or just a reasonable limitation of the AI in this current version.

So a meeple who is shy or awkward around others is best assigned to a peaceful life of mining asteroids by themselves. Violent meeples shouldn’t be given guns, lest they get bored and go on a rampage. A meeple with the ‘clumsy’ characteristic will repeatedly trip over cables and so should be kept away from useful parts of the station, like the bits that produce oxygen for breathing. In space, just like in the gaps behind TV cabinets, power cables are loose and draped around the place like terrible black spaghetti. 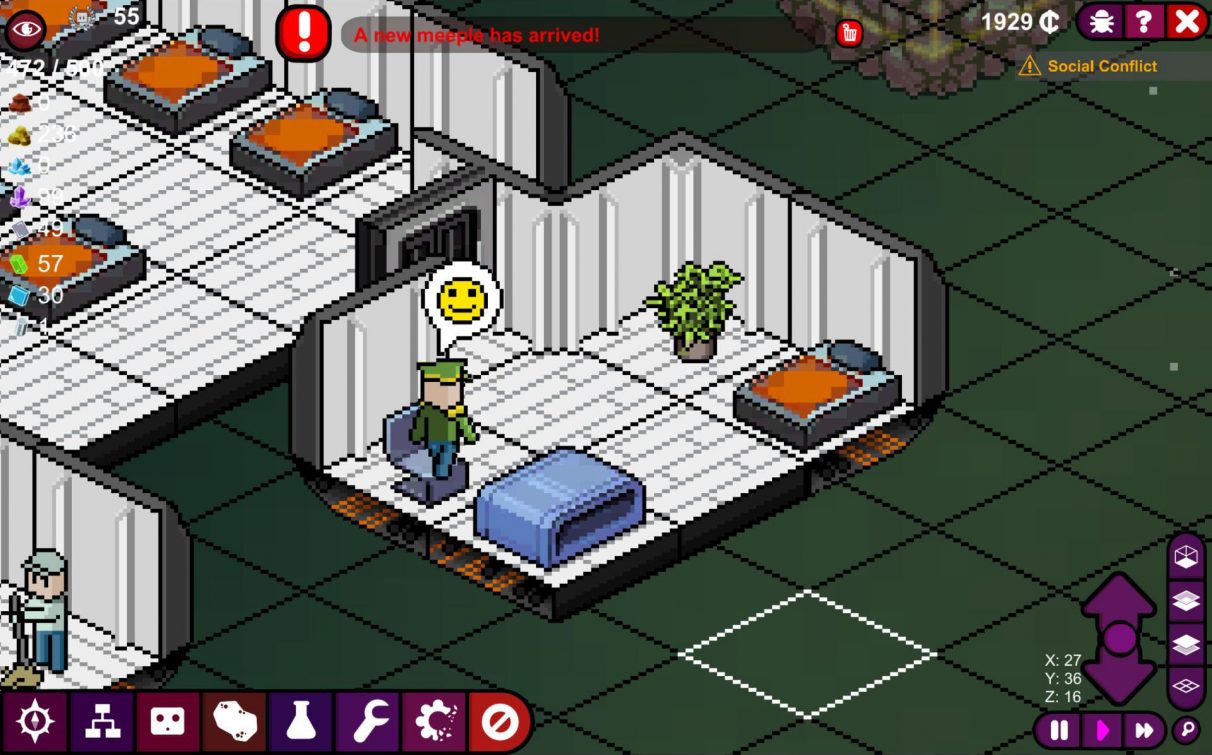 The thing is, with no real way to mitigate somebody’s worst characteristics, it makes more sense to immediately get rid of bad eggs and wait for a better candidate to come along (which also happened to be my Tinder bio for a while). Some of these meeples have a phobia of space itself and refuse to pop outside the station on tasks without having a panic attack, which makes you think they must have misread a job application somewhere in the process. (It’s currently the only phobia that exists in the game too. You’d at least expect a few arachnophobes seeking asylum in the farthest reaches of deep space, the one place spiders have not yet colonised.)

Other meeples just bicker constantly whenever they’re in the same room, gradually chipping away at one another’s psyche until one day, bam, there’s a grinning, frozen corpse zooming out of the airlock. Even when they’re asleep, some meeples can’t help but be annoying. There’s a ‘loud snoring’ trait that seems to be about as welcome on a space station as a crack in a window. This game is less about exploring the cosmos and reaping its material bounty, and more about cranky astronauts being made to live in very close proximity to one another. 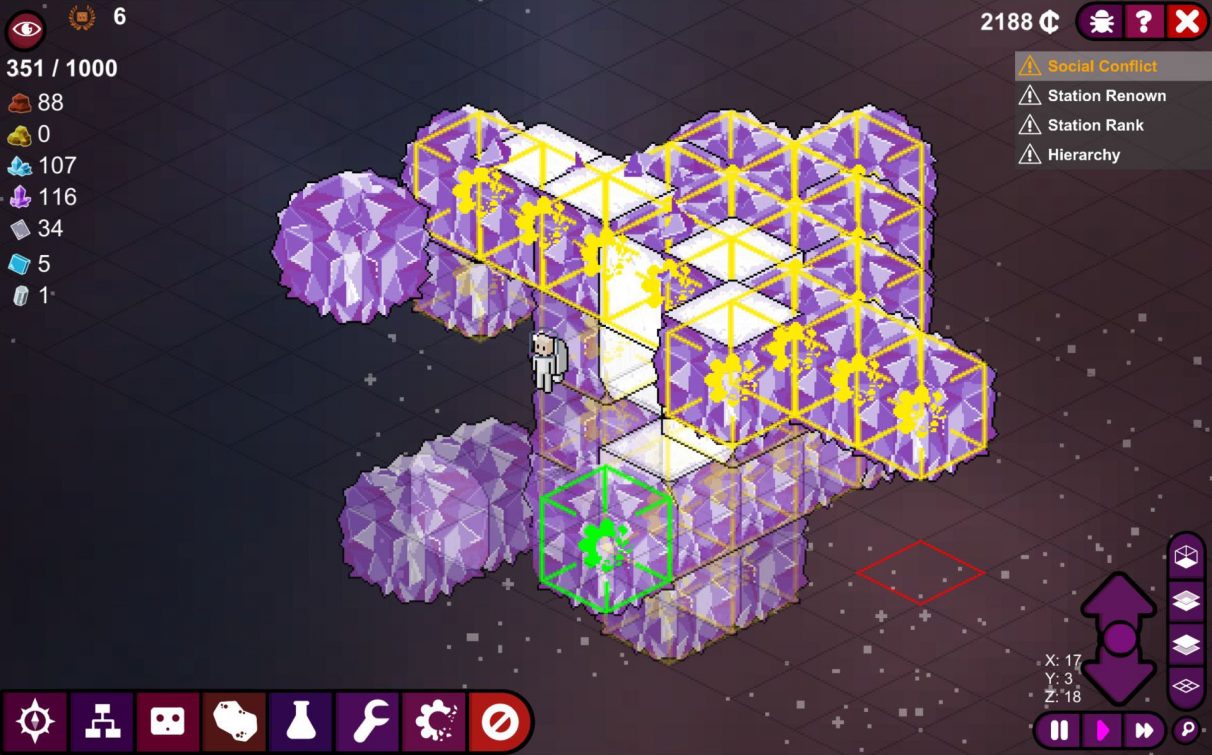 Meeple Station is still very rudimentary in Early Access, and while a set of features are currently in position, they don’t yet give rise to any strange or interesting events. If more complex colony simulators like Rimworld are made of systems built upon systems, that interact and interlock in unexpected ways, then Meeple Station is still a basic jigsaw puzzle with predictable outcomes. Hungry meeples eat, sad meeples complain, janitor meeples clean up space muck, trade ships show up every few seconds with the materials you need to build the parts of the station you want. If you run low on food you build a few more fish tanks, if you need more energy you pop a few more solar panels down. If a dirtbag meeple is irritating his colleagues, there’s little use in appeasing him, just give him his space P45 and send him on his way.

Where Dwarf Fortress uses a constant influx of new migrants to prevent your growing colony ever reaching a point of equilibrium, there’s no such forwards pressure in Meeple Station. New meeples arrive as the reputation of your station increases, but never in droves, and only when you’ve got the beds to keep them in. The broader challenge comes in gathering the resources required to progress along a tech tree and build a massive engine room that, once strapped to the side of your station, can send you scooting across the galaxy map in search of even more resources. You also need to defend your growing station from pirates and meteorite impacts, using guard meeples and deflector shields, but those hazards are easily avoided by steering your station-ship away from the more perilous (and helpfully signposted) parts of the galaxy. At the moment there’s no reason to head into danger other than to watch your carefully constructed community be obliterated through your own incompetence. 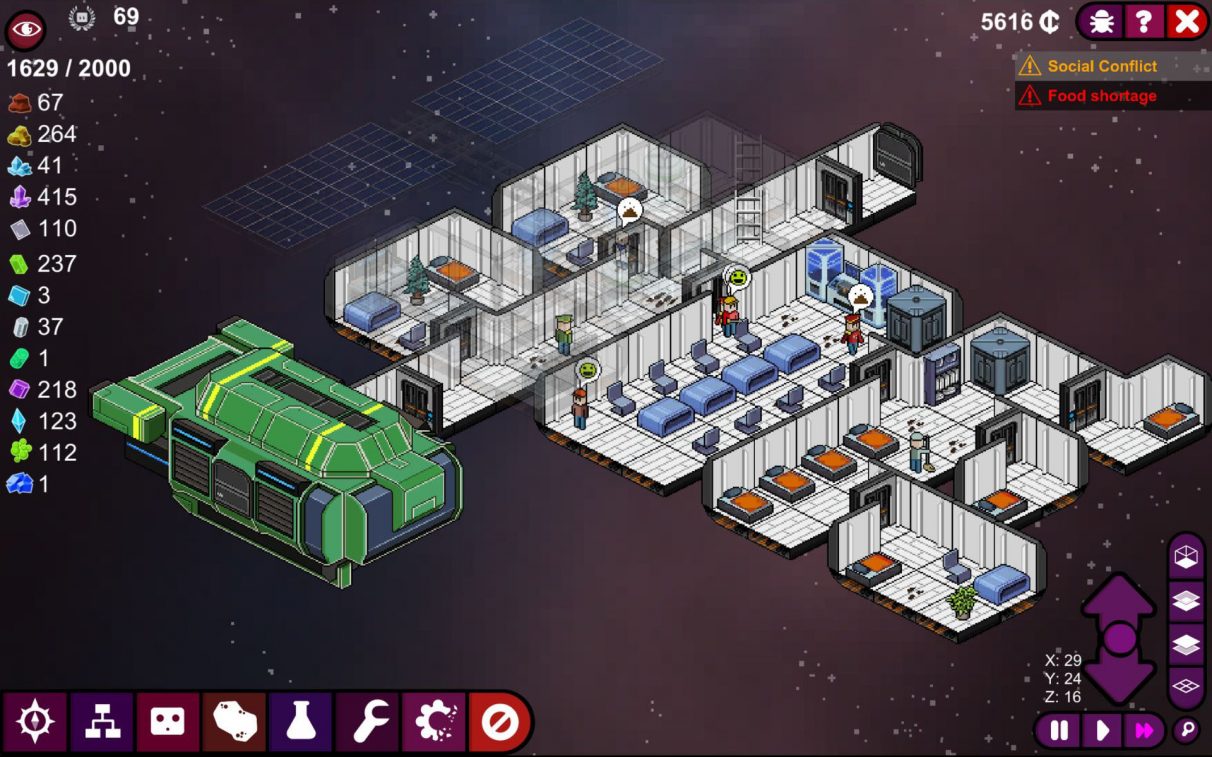 A whole host of interesting features are promised, chief among them a co-operative multiplayer mode that will allow two players to command the same station. Developer Vox Games reckons this Early Access release represents only 20 percent of what Meeple Station has to offer, with the roadmap including away missions, a full campaign and generally loads more stuff. In its current, rattling, barebones state? Meeple Station is stuffless. It wants for stuff. It is a stuff-shaped hole where stuff should be. It is the very emptiness into which its own sad meeples eject themselves.