If you click on a link and make a purchase we may receive a small commission. Read our editorial policy.
This is Inkrose. You can find every episode listed for your convenience here. It is a sequel of sorts to the Basement Of Curiosity, which you can find archived here.

In case you weren't aware, I've started a brand new Dwarf Fortress diary series, which I kicked off with a fortress-founding video featuring Tarn Adams, the game's lovable dad. This series concerns the fortress of Inkrose: a settlement founded by seven religious fanatics, intent on living by a set of incredibly impractical commandments which I sourced from the capricious dwellers of the Kitfox Dwarf Fortress Discord server. At the end of our first episode, we left our dwarves living in a hovel with no doors, a pitiful pile of weeds to feed themselves with, and seven boisterous, holy beak dogs circling them with ever-more-menacing playfulness.

Without spoiling anything, I can tell you that things get... quite interesting from here. But before we move on to that, I want to do something I always regretted not doing with the Basement of Curiosity, which is provide you with a proper profile for each and every founding dwarf. Come on in, there's pictures and everything.

(Oh, and that there is last week's kick-off video, in case you missed it)

As you probably already know, Dwarf Fortress is a world generator. And it generates worlds with extraordinary levels of detail. Each of the seven dwarves in an embark is subject to paragraphs and paragraphs of information concerning their appearance, characteristics, opinions and relationships. Nevertheless, all of that can be quite daunting to go through, and it can be really hard to get an overall impression of what a dwarf is like from a wall of short, no-frills descriptive sentences.

Rejoice, then, because I've spent hours scrutinising Inkrose's seven founders, and I've come to the conclusion that they are all, almost without exception, catastrophically flawed characters. I always say that Dwarf Fortress has managed to make a more convincing alien culture than 99% of attempts by SF writers, and a scan of the dwarf profiles below bears that theory out very solidly indeed.

1) Yes, all the dwarves are called Urist, as per the rules of this series. But that could make writeups quite miserable experiences, so I've referred to them by the translations of their surnames here.
2) You'll see in some cases, I've mentioned which gods these dwarves worship. How does this work with the religious zealotry that forms the main Bit for this series, you might ask? Well, don't worry - all will be explained as the story progresses. I've got it all figured out. For now, just sit back and enjoy the following selection of booze-guzzling, potato-headed sociopaths.

(Oh, and you might want to keep this page bookmarked, by the way - I'll be adding to it as the series progresses and more notable dwarves join the cast, as well as hopefully adding fortress maps, particularly moving illustrations and things like that. Think of it as a sort of companion guide to the series.) 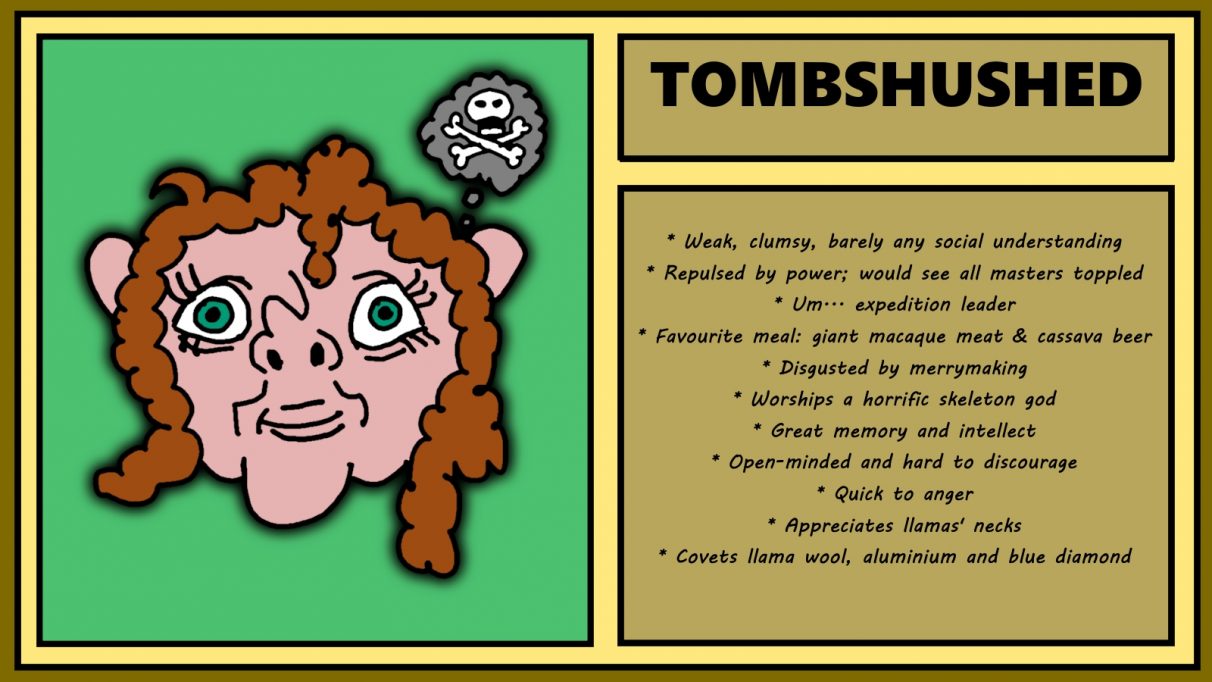 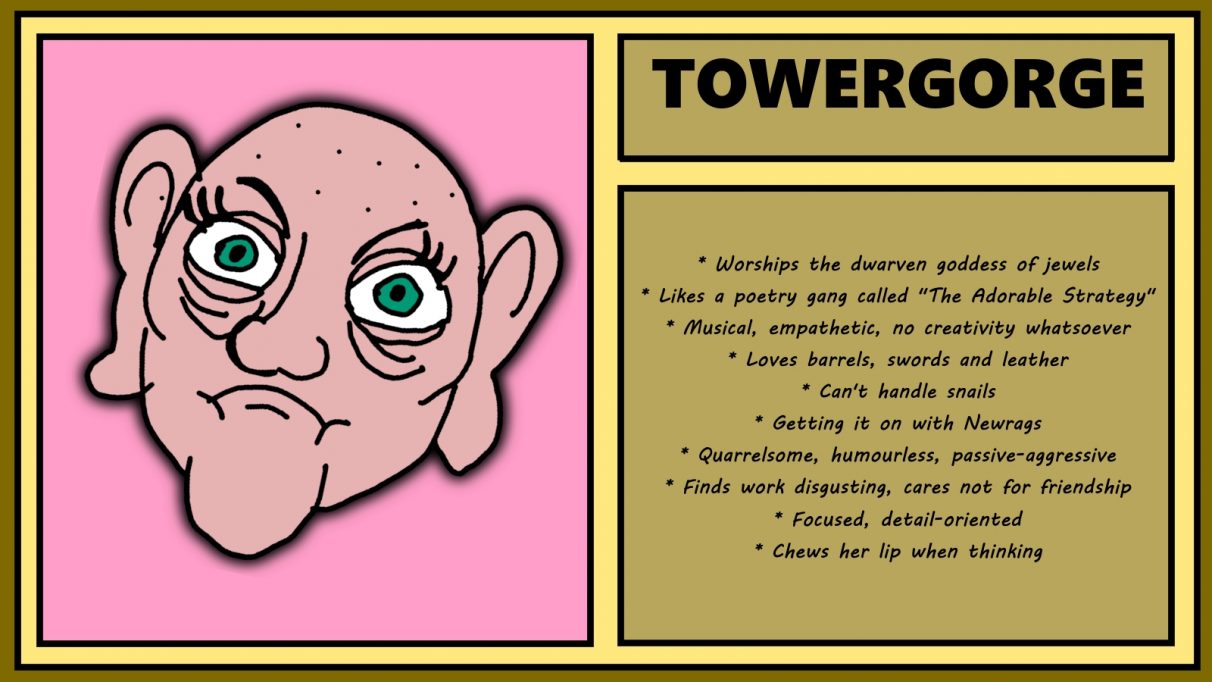 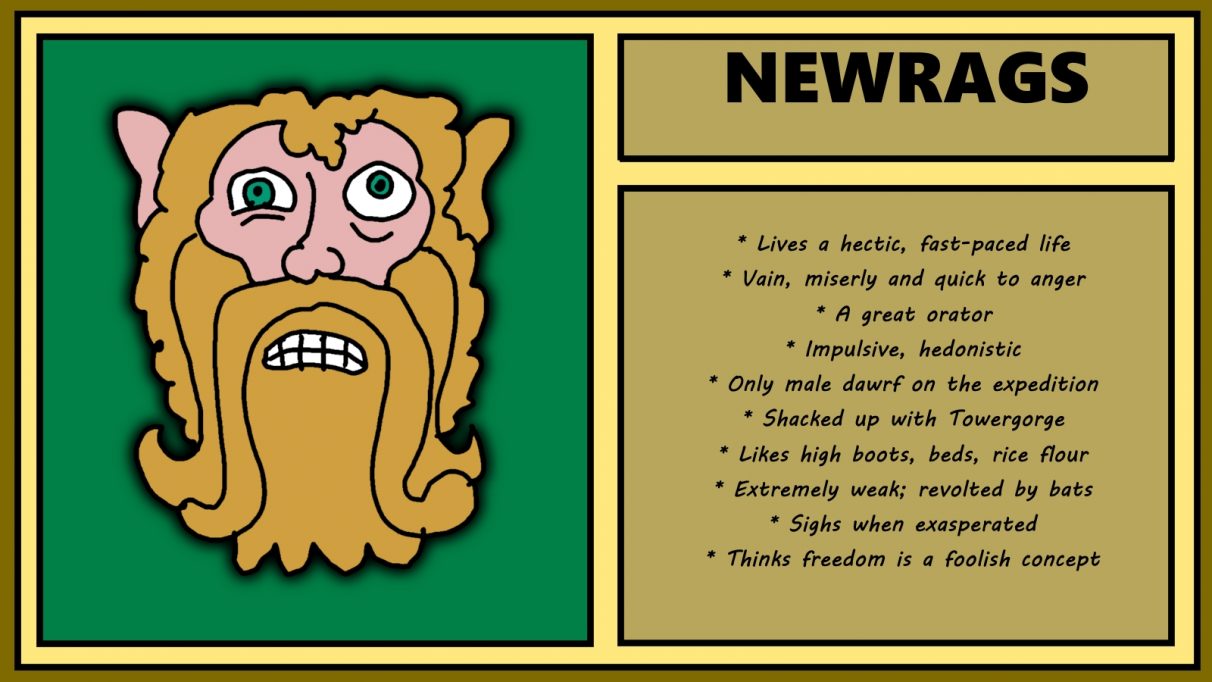 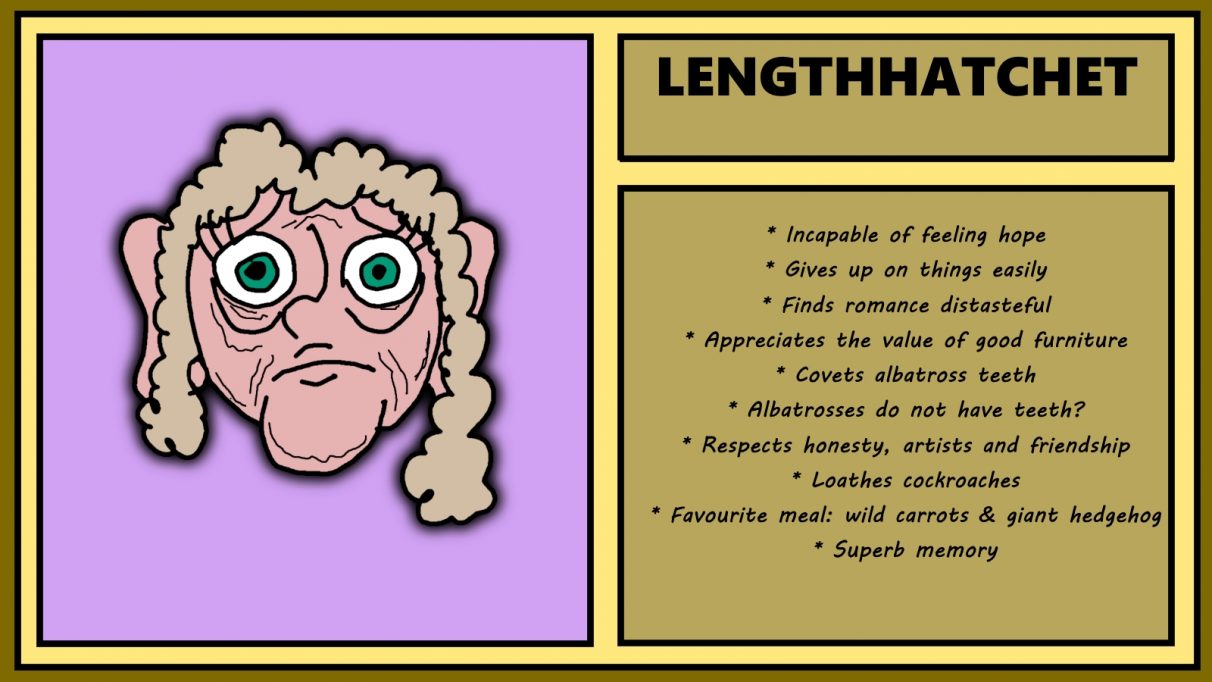 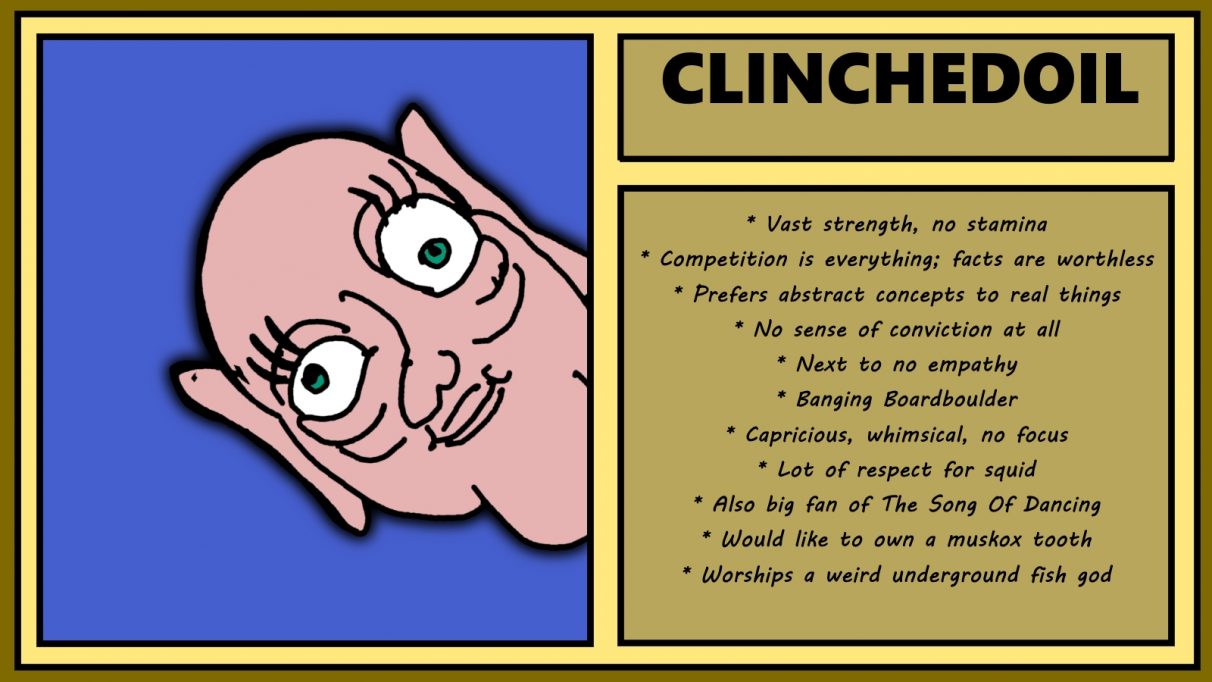 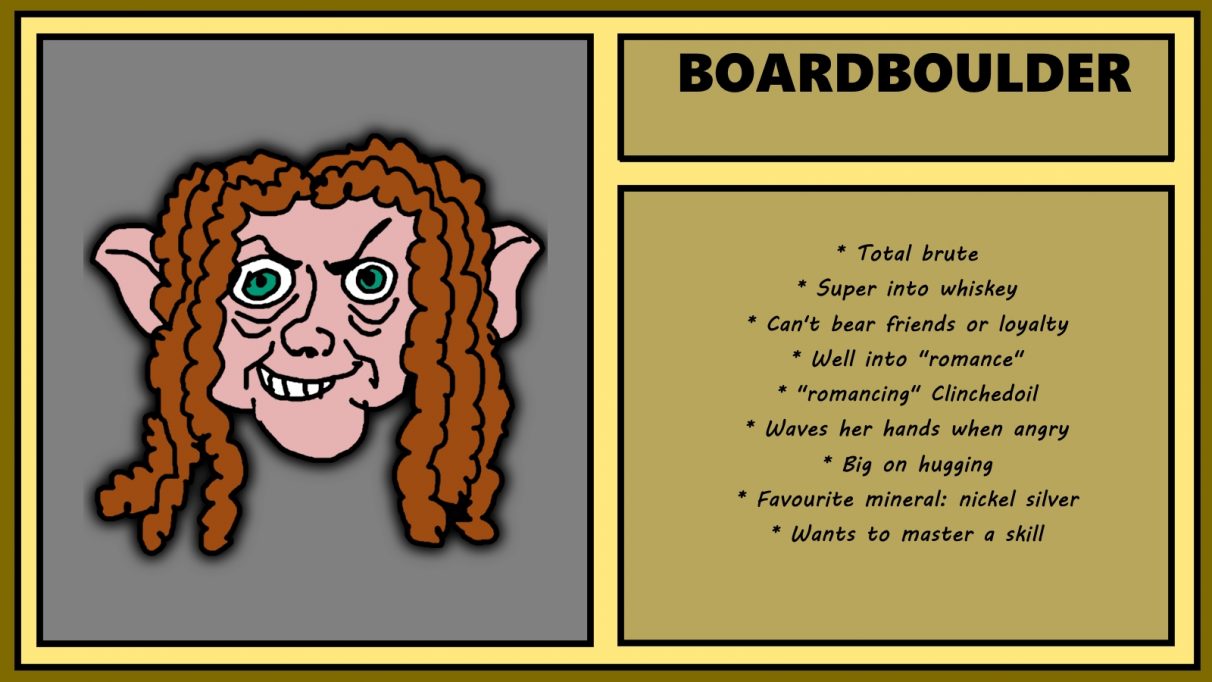 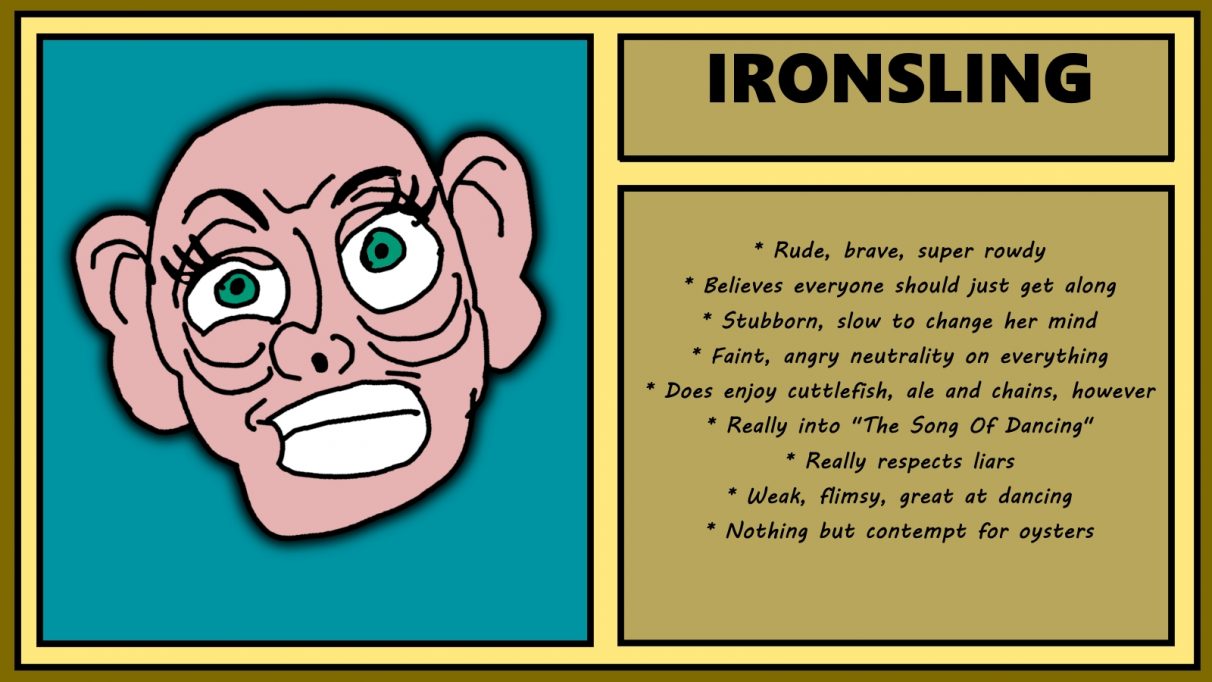 So - any favourites so far? Who would you be most afraid to live in a vile burrow with?

For me, any of these could be hero material, quite frankly. But of all of them, I think Boardboulder has a particularly dark energy, which I enjoy a lot. None of them seem like natural beak dog wranglers, unfortunately, and most of them despise nature to some degree. But you know what they say: needs must, when the beak dog drives.

Please, also - if you have any questions, requests or commands for me to act on in the series, take to the comments and say so. I'll be starting the narrative off on it's inevitable downward spiral next week, so if there's anything you'd like me to focus on, now's the time to say it. I'm well keen for this series to be all interactive and that, so I'll do my best. See you next time, friends.