Megaquarium's off-screen fish scientists had just unlocked some eels, and they seemed like just what my aquarium needed to draw in the big crowds. Sure, I had some guests, seduced by the promise of clean floors, well-stocked vending machines and at least three types of fish, but I lacked the kind of big-ticket item that put aquariums on the map. So excited was I to display my new eels, I dropped them into a tank that already had a few underwater residents. Disaster ensued.

Megaquarium sits firmly on the relaxing end of the management spectrum, but it can still be a tightrope walk, tasking aquarium bosses with creating delicate ecosystems designed to support a wide variety of needy exotic fish, each with their own specific requirements and characteristics. As new fish are introduced across the campaign and sandbox mode, each with increasingly demanding requirements and personality quirks, keeping them all happy and alive necessitates a lot of planning. 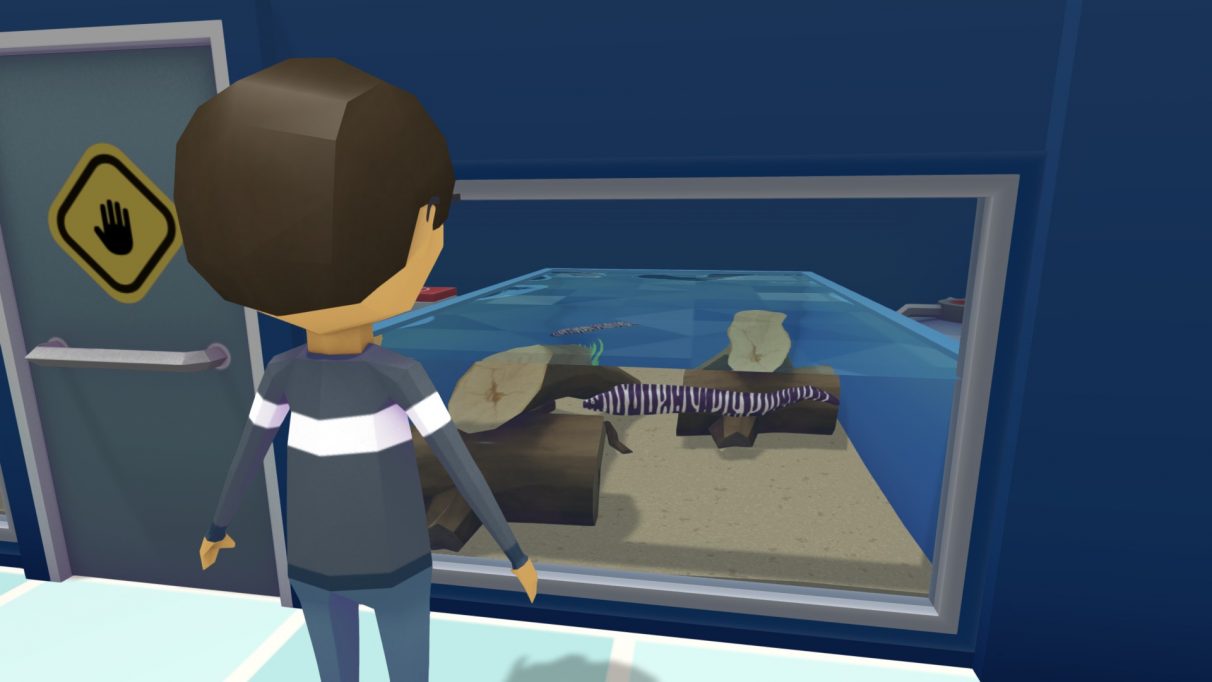 The tank was perfect for the azure demoiselles and orchid dottybacks (fish have amazing names) already inside it. A filter kept it clean, the temperature was just right and I'd spruced it up with some plant life. Every day, one of my employees would grab food from the boxes nearby and keep the fish healthy and full. On the off chance anything broke down, I’d placed a workbench close at hand. It was a fine-tuned machine. The eels ruined everything.

My water filters weren't able to handle the new fish, so the water quality dropped immediately, increasing the risk of every fish in the tank getting sick. Worse, the eels weren't exactly friendly. Some fish are bullies, some are timid and some like to gobble up everything they share a tank with. What had once hosted all sorts of colourful sea life had become a pool of death and sickness, presumably scarring any kids passing by. 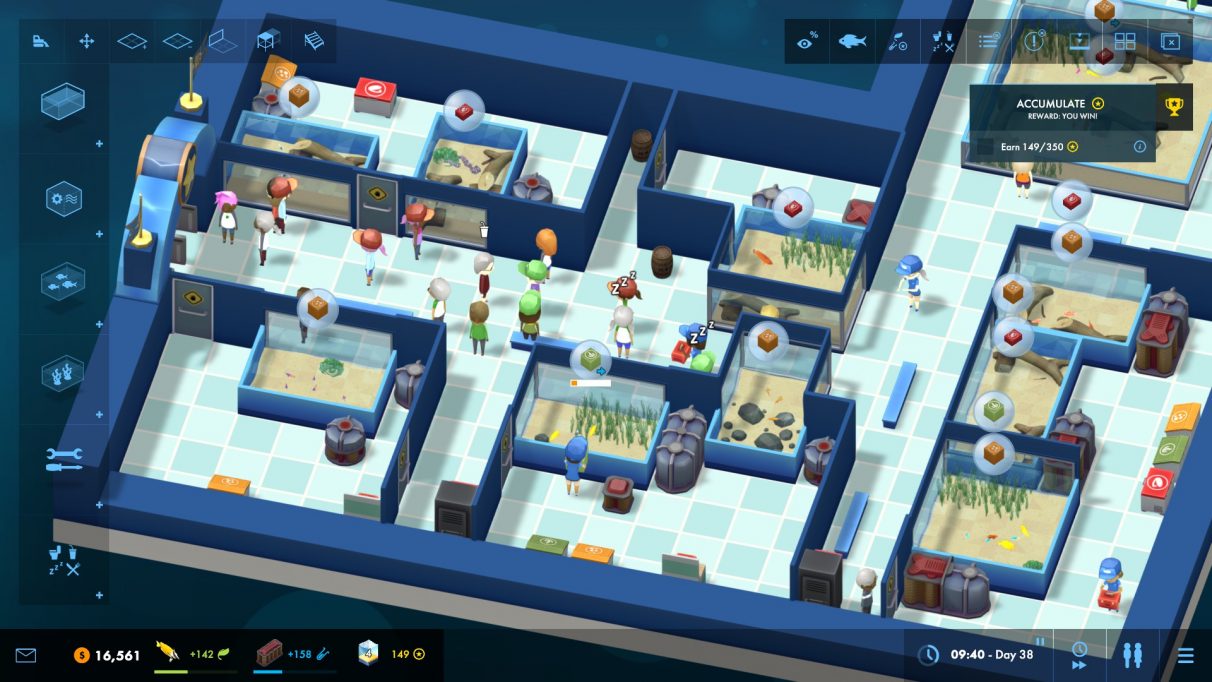 I wish I could pretend this was all some unavoidable disaster; that I don’t have fish blood on my hands. Lamentably, I’m entirely to blame. There are a few places where Megaquarium can be a touch vague, but all I needed to do to find out that adding eels to the tank was a bad idea was check their profile. Fixing the problem, thankfully, wasn’t much more complicated. Alerts made it clear what the issues were, and within a few minutes I had a brand new tank up and running, the eels were happy and the other fish were safe.

That’s been my experience generally - occasionally things will go terribly, horribly wrong because I can barely even look after myself, let alone an aquarium full of vulnerable fish, but repairing the damage is rarely a headache, and mistakes can typically be corrected very quickly. 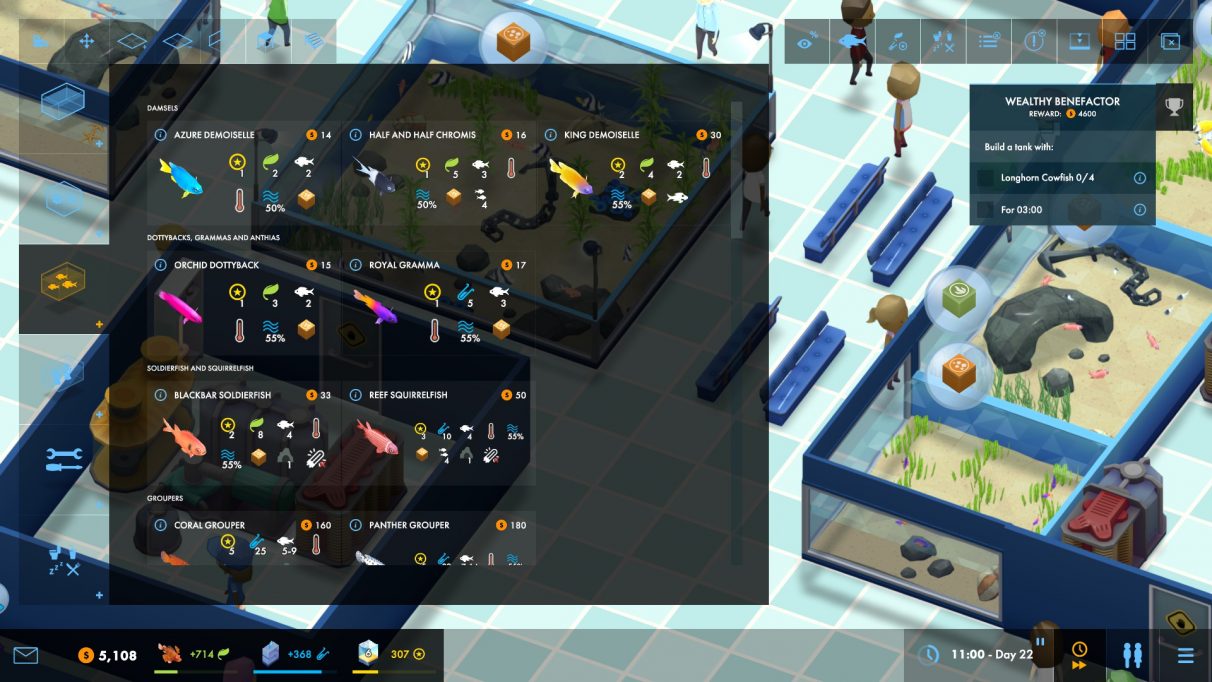 While Megaquarium is pretty good at telling you things are going pear-shaped and provides plenty of information about all of your fish, the UI is missing a few things. There’s no quick way to search for staff, fish or anything else, which isn’t a problem early on, but once you’re running huge aquariums with hundreds of fish and dozens of employees, you’ll definitely notice its absence. Filters and overlays wouldn’t go amiss, either, especially when you’re trying to stop a disaster from happening instead of just responding to one. In a less easy-going game, these might be more serious problems.

Rather than lurching from crisis to crisis, Megaquarium is content to let you tweak and tinker with minimal pressure as you try to make both guests and fish as happy as possible. With each new mission comes not just unlockable fish, but additional services for your guests, like shops. New tools and props also get doled out, helping you build a slicker, more efficient aquarium. Most of the time, these new features are tied to the mission objectives, so the game takes the time to teach you throughout the campaign. 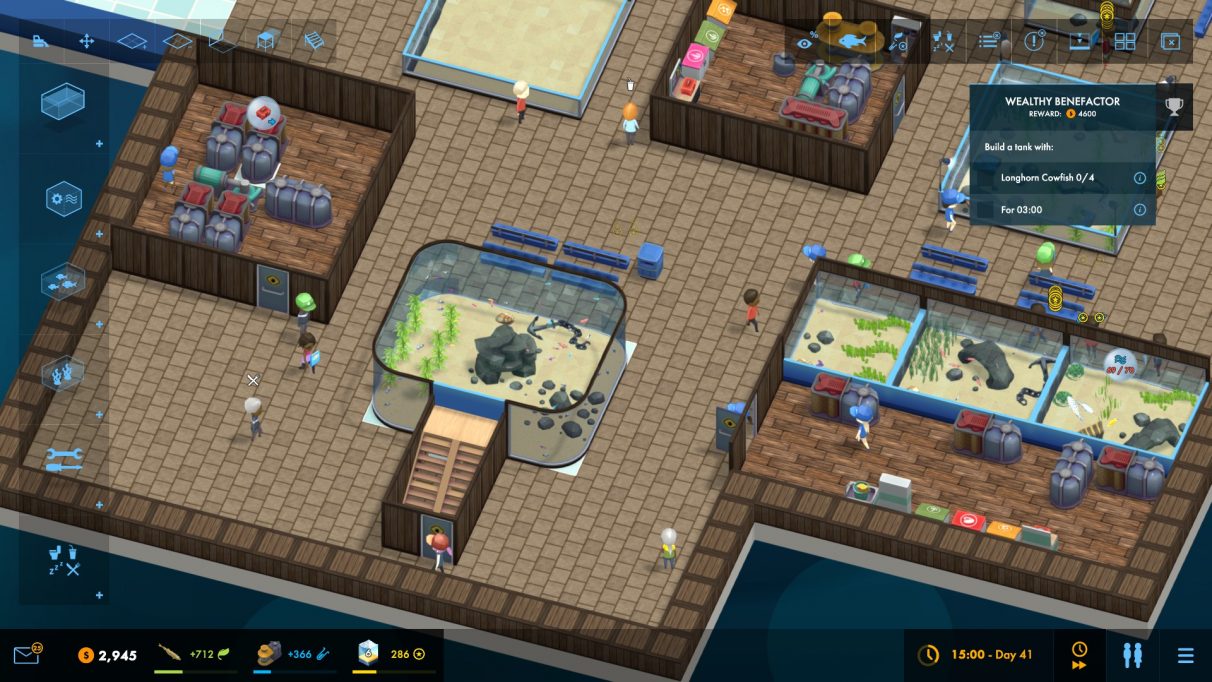 It took me ages to notice that I was juggling some rather complex aquariums. Features are unfurled at just the right pace, so I never felt like everything was about to come crashing down. I was busy, sure, but not overwhelmed. I had all sorts of different tanks to look after, each with their own ecosystems and countless fancy machines to help my fish thrive, but by developing my staff to fill specific roles and then assigning them to zones, the day-to-day running of the aquarium became partially automated, freeing me up to create new exhibits and focus on specific projects.

The campaign includes 10 missions, but once you’re all trained up, you can take on the sandbox mode. You don’t actually need to wait, however, and you can jump straight into the sandbox the moment you fire up the game, though I definitely recommend doing at least a few missions first. They serve as excellent tutorials, and there are some decent challenges in there that will ultimately benefit you when it comes time to build your own aquarium without limitations. Conveniently, the sandbox mode also lets you skip to whatever rank you fancy, skipping the early game and jumping right into an aquarium where you can start going wild. 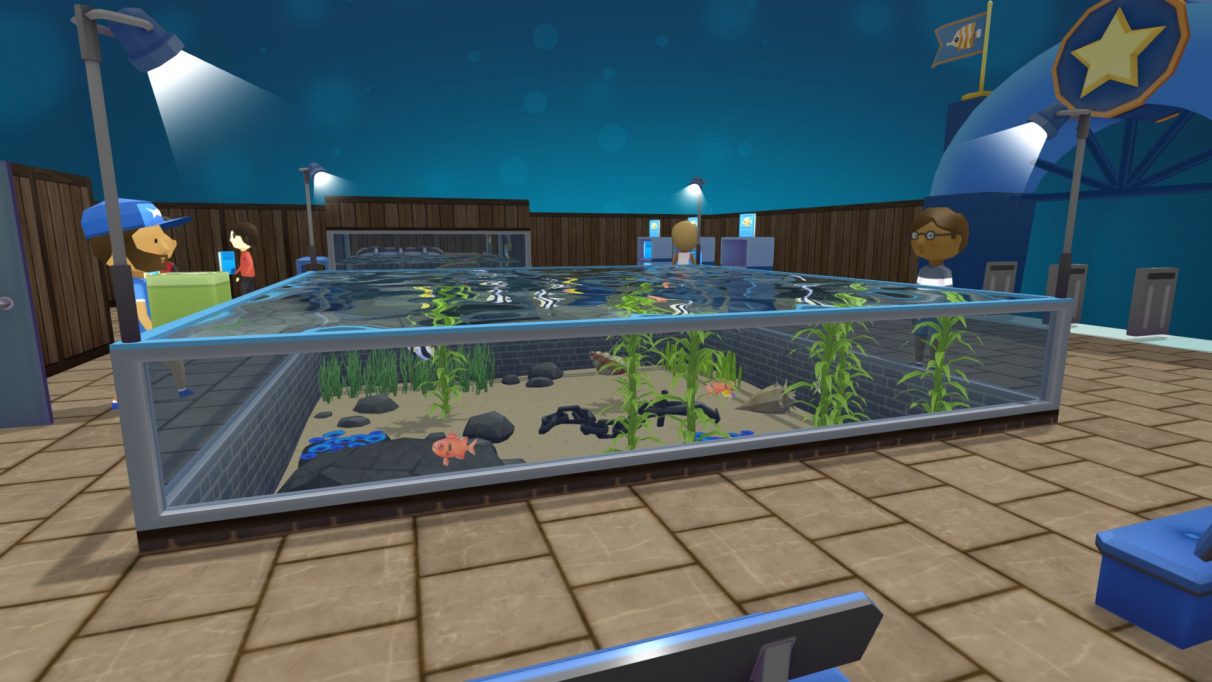 Megaquarium smartly includes the ability to see the aquarium from your guests’ perspective. When you zoom in, the camera seamlessly switches to a first-person view, letting you essentially walk around and see your creation from the ground level. It’s not hugely practical, but it makes me exceedingly happy, anyway. Being able to inhabit the aquarium and just walk around and explore the exhibits is considerably more rewarding than the oodles of cash the guests throw my way. OK, slightly more rewarding.

After dinosaur jailbreaks, killer diseases and chilly apocalypses, managing a bunch of cheery aquariums has been a welcome change of pace. Sometimes the fish die, and sometimes I go on a spending spree and run out of money, but most of my time has been spent merrily designing spacious homes for my scaley chums. Importantly, I'm still having a lovely time making them, and I continue to discover new fish, adding more design wrinkles as I try to cater to them all. I'm very excited about my plan to maximising the water quality of my latest tank, and no, that's not something I ever envisioned writing.

It’s a tricky balance to master, relaxing but complex, yet Megaquarium manages to do it while making it look effortless. It’s a breezy, upbeat management game that nonetheless gives you lots to play with and plenty of room for experimentation. Plus, the fish are all cuties.