Premature Evaluation is the weekly column in which we explore the wilds of early access. This week, Fraser’s doing his best John Hammond impersonation by caging up dinosaurs and displaying them in exchange for tourist cash in dino theme park sim Mesozoica.

This summer, Frontier plans to launch Jurassic World Evolution, a licensed dino-park sim. I can almost understand, then, why I’m already playing Mesozoica, another dinosaur-themed management sim. Absent a big license like Jurassic Park, developers DreamInCode B.V. and Squadron Interactive might be keen to beat Frontier to the punch. This early launch is not likely to have the effect they intended.

Mesozoica is less a management sim and more a selection of assets that can be plonked down in one of the game’s two modes: a ‘main’ park mode and a sandbox mode, both of which are effectively identical. The sole objective is to put together attractions and facilities that bring in the tourists and their fat wallets. Maybe they’ll even learn a thing or two about extinct beasties along the way. 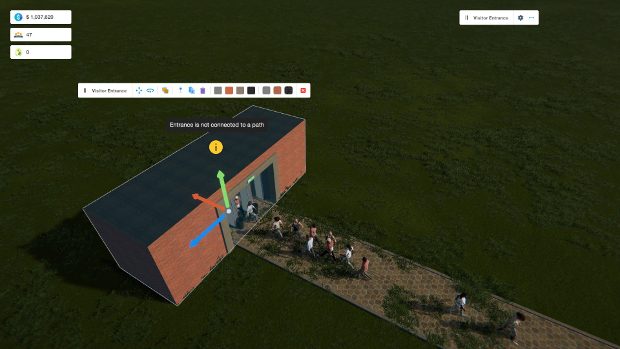 After slapping down a path and my first building, the park entrance, visitors immediately started pouring into the newly opened Dr. Ian Malcolm’s Dinosaur Wonderland. They're walking right through a brick wall because it wasn’t particularly obvious which side was the entrance and which was the exit. There’s no budget menu, and visitors don’t seem to spend money in the park itself, but they do buy a ticket at the entrance. The money was rolling in. People were coming from all over the world to gasp in awe at my very large grassy field and single short path.

Placing buildings and other assets generally costs money, but maintaining the park is free, so there’s no real management side to Mesozoica at all right now. Visitors have no needs, nothing seems to break down, there are no staff - essentially both modes are creative modes. That’s not necessarily a bad thing, though. Like Planet Coaster, Mesozoica immediately lets you go wild, combining props, building pieces and scenery to make everything from hotels and restaurants to tropical dinosaur enclosures and big safari plots. Everything’s modular, and you can change the colour, texture and even the size of every object. 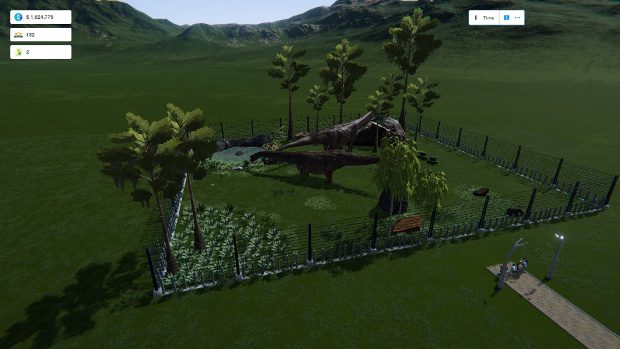 If you want to break something in the service of making your park look cooler, the game’s absolutely fine with that. Take my first enclosure. After sending out dig teams and spending some cash on the black market, I had enough dinosaur DNA to make my first attraction (science really is remarkable), a pen for a pair of Argentinosauruses. Unfortunately, the hatchery that they spawn from is just an ugly box, entirely ruining the Eden-like paradise I wanted to create for my lizard pals. Thankfully, I had some boulders. Wee ones, but I tweaked the size and dropped them on top of the hatchery, hiding it while giving my dinosaurs a nice rock feature to stare at all day. This meant that fresh dinosaurs appeared under the rock, but simply lifting it up allowed them to wander to safety.

I was making progress but even slapping together a few walls and props to create a simple food stall is as frustrating as trying to herd T-Rexes. Mesozoica’s UI, tools and controls are so bad that they're almost adversarial. Sometimes things snap to an invisible, inconsistent grid, or they snap to other objects, but then sometimes they don’t. If you need to delete an object, you might not be able to select it, even if you’re in the building mode. If you can select it, enjoy deleting other nearby objects along with it. Everything takes three more clicks than is necessary, and god forbid you try to tweak the scale of something just a little - chances are you’ll turn a pebble into a mountain. 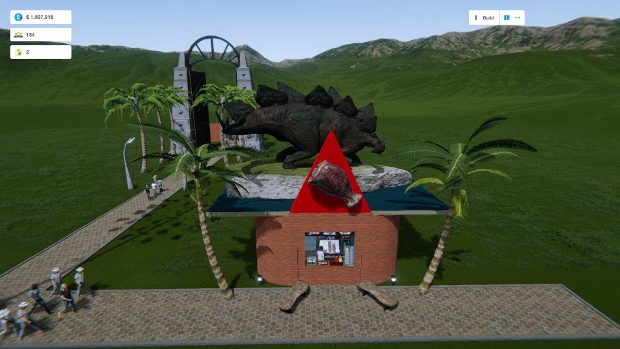 Looking at the screenshot above, you’re probably thinking that it was a lot of fun to create this incredibly inspired design for a ‘meat’ restaurant. The hip signage. The actual dinosaur on top of it. The rustic benches. What a whimsical creation. I look at this and recall swearing. Lots of swearing. Quite a bit of pleading, too. It is not a happy memory. And yet, I’m still pretty chuffed that I was able to do something as dumb as using a real chunk of meat that’s meant to be used as food for the carnivorous dinosaurs as a food stall sign. Maybe Mesozoica is a meta-commentary on game development. Have a horrible time making cool things.

While the Steam store page advertises things like managing a dinosaur’s needs and watching it go through its life cycle, that’s currently a bit of an exaggeration. Dinosaurs start off tiny and within about 10 minutes are fully grown, and it happens automatically. They don’t have any needs, either. Food gets ignored, as do dead dinosaurs. They mostly just wander around aimlessly, very occasionally attacking each other if they're not of the same species. 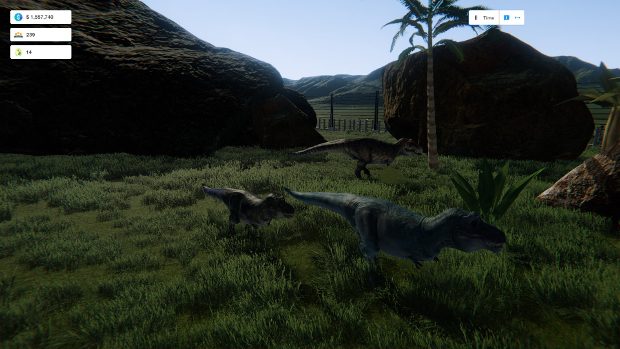 Bored of my own park, I wanted to give the crowds something amazing to watch - a clash of the titans, with huge alpha lizards battering each other for my visitors' amusement. When I introduced five infant Tyrannosaurus rex into an enclosure with six close Mongolian relatives, Tarbosauruses, several of the steppes dinos looked like they were going to chow down on the baby T-rexes, but after a few roars, they just wandered off to stare blankly at some trees. Finally, an adolescent Tyrannosaurus did attack, killing the much larger Tarbosaurus in one blow while the others looked on, doing nothing. Then it was back to normal, with every dinosaur largely ignoring the rest. It all seems pretty random, and nothing the dinosaurs really do suggests that there’s much of a simulation cooking away under the bonnet.

After my experiment failed to spice up the park, I was left with only one alternative: bring down the walls. I mean, that’s the whole point of this risky endeavour, isn’t it? Make dinosaurs, generate loads of hype and then unleash them upon hundreds of unsuspecting tourists. They deserve it. They didn’t pay for a single Stegosaurus steak sandwich. 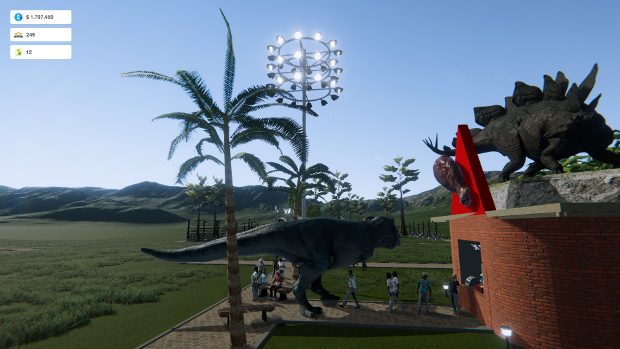 When the walls came down, the visitors lost it. They flew into a wild panic, desperately fleeing only down the marked paths and at a safe speed, occasionally stopping to visit the food stalls or pop into the new cinema I’d just constructed. One Tyrannosaurus eventually left its enclosure to see what all the fuss was about, but it turned out that it just wanted to order some lunch. It didn’t pay either. Eventually another followed, but it just wandered off. Neither of the Argentinosauruses moved an inch, seemingly content to watch all the tiny humans flipping out. Can dinosaurs be bemused?

As the two escaped T-rexes headed away from the park, I wished them well. When I put them in that enclosure, I’d misjudged them. These noble creatures aren’t the bloodthirsty monsters that Steven Spielberg so obviously has a vendetta against; they just don’t like cages. Taking a cue from my new friends, I closed down Dr. Ian Malcolm’s Dinosaur Wonderland for good and left for a better life.