There was a point early on in Metal Gear Survive where I thought that, despite its annoyances, Konami’s zombie spin-off was actually going to be quite good. It came about an hour in when I had to sneak into a base packed with shambling horrors, using stealth and distraction to outwit the hordes. It was tense. It was exciting.

Metal Gear Survive takes place in Dite, a pocket dimension where an unknown force has turned humans into crystalline zombies. It’s an odd direction for the series to go down, but not necessarily one I object to. You might think we’re inundated with open world zombie ‘em ups, but the last one I played was Dying Light - and that was a blast. I was quietly looking forward to a stealth-focused take on the idea, brought together by a smart trap and defense placement system for those moments when sneaking turned sour.

At first, it seemed like that's what I was going to get. An early mission involves retrieving a memory board from a base crawling with zombies. I had to scope the place out for the non-obvious entrance, then carefully creep inside. There was a moment where I needed to lockpick a door, and only got halfway through before the horde lost interest in the distraction I’d thrown and started shambling towards me. I was reminded of those moments in Amnesia where you need to turn your back on the monsters to open a door, a trick that’s as effective there as it is here. 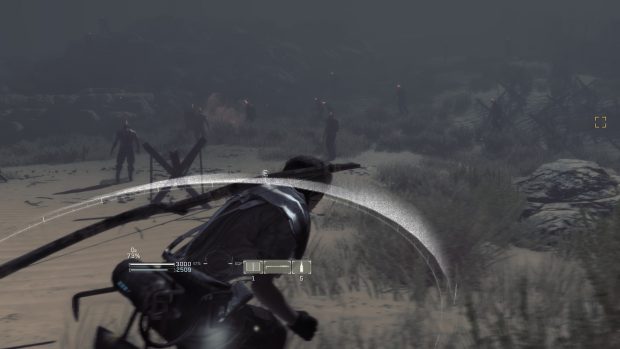 I made it through, and escaped by climbing on top of a roof. Once I’d nabbed that memory board, I had no choice but to drop down and charge through the crowds, stopping only to whip round and summon a fence over the entrance. It was a ten minute stretch where everything came together, and probably my favourite ten minutes from the 30 or so hours I’ve spent with the game.

90% of the time, you see, stealth is left by the wayside and encounters are resolved through so-so melee combat. There’s a degree of finesse involved with those brawls, but lack of variety in enemy types means you’ll repeatedly go through the same old motions. It doesn’t help that the bog-standard “wanderers” will sometimes do a super-powerful strike that knocks you to the ground, which often spells certain death if there’s more than a few others nearby.

Before you get to contend with that melee combat though, you’ll have to contend with the “Survive” part of Metal Gear Survive. While I may be on board with “Metal Gear but zombies”, my tolerance for topping up thirst and hunger meters has become almost non-existent. I just can’t see searching for water sources and hunting animals as anything other than an unnecessary chore. Here, failing to eat and drink drops both your stamina and maximum health, which means you won’t be able to sprint for more than a second or two without running out of breath. 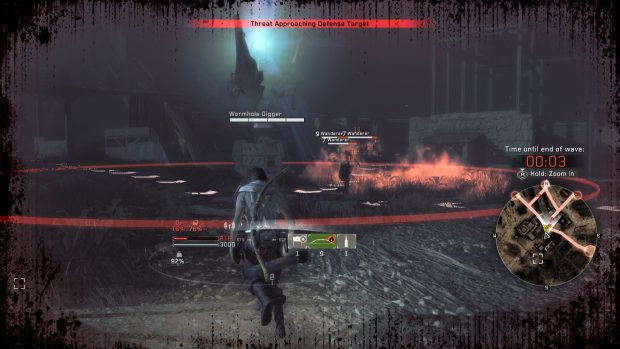 While the hunger and thirst systems are a needless intrusion, they do become less bothersome once you’ve built the appropriate buildings in your base. A more constant irritation throughout the game is gathering all the resources you’ll need to craft defenses, gear and weapons. It wasn’t long before I resigned myself to picking up almost everything I possibly could so that I wouldn't end up missing parts needed to craft the stuff I wanted or to fix what I already had.

As a result, I felt a strange mix of frustration and relief whenever I stumbled across a building that called for some thorough looting. As I held down X to hoover up yet more chairs and sandbags, even my character looked bored.

There’s no salvation to be found in the story or its writing. Both are absolute guff, and not in an endearing Metal Gear sort of way. The characters are an unfortunate combination of terribly acted and atrociously written, with confused motivations that border on the surreal. A gruff, insolent marine type that you meet early on, for instance, is embarrassed when it’s revealed that he had the idea to fix up a kid’s wheelchair. In what world is that something anyone would be embarrassed about? 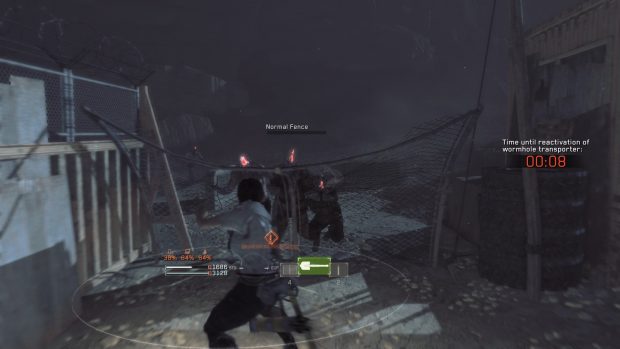 While enduring the story and roaming the world, you’ll be blathered at by monotone robots who repeat the same maddening lines again and again and again. Nearly every time I ran out of stamina, it felt like I’d hear the same not-joke about “being careful not to run out of gas”.

That’s just one of many pointlessly irritating inclusions, which in the first few hours piled up enough to make me add a section to my review notes subtitled “annoyances”. It’s the first time I’ve done that. 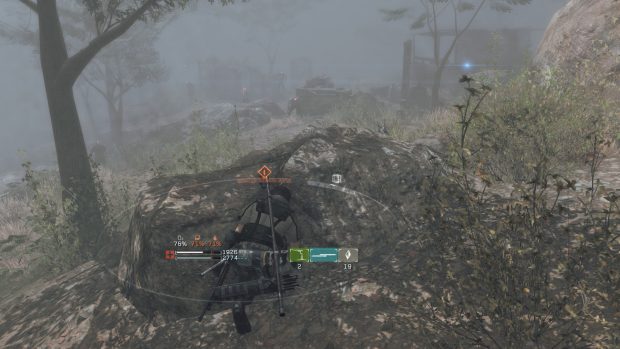 The list of annoyances grew. The checkpointing is awful, warping me all the way back to base after each death without all the items I’d painstakingly looted. You can find special blueprints in containers around the world, but they take an agonisingly long time to open and often don’t contain anything of value. They’re always worth checking out, because sometimes you’ll find a new weapon that transforms every combat encounter you’ll have for the next few hours. More often though, you’ll find a terrible scarf or a laughably small amount of crafting materials.

The list goes on. Subtitles kept obscuring menus as I tried to use them, sometimes in the middle of tense situations where I was trying to work out how to heal myself. Turns out you can only do that with a special spray, and the first aid kits I picked up only helped with injuries. Individual parts of your body can get damaged, which sounds cool until you realise you don’t have a bandage to support your sprained ankle, and have to spend 20 minutes limping home.

Healing yourself isn't the only action made trickier by menus. You can upgrade your gear and weapons, but it’s under under a separate section called ‘customise’. You can break down other materials to get ones that you need, though I only discovered that many hours in. 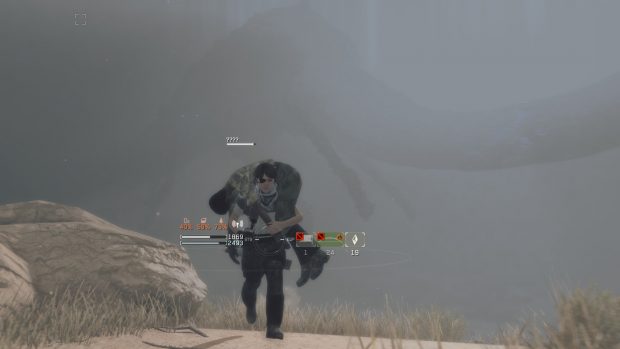 Those are examples of information that’s accidentally been presented poorly. Even worse is when the game deliberately decides to starve you of information (as if depriving you of food wasn't enough). Dust zones cover most of the world and inside them visibility is poor, stamina runs out more quickly and an ever depleting oxygen tank adds another unnecessary annoyance. The lack of visibility makes an already grey, dull and samey landscape look even more grey, dull and samey.

More troubling still is that, when you’re in the Dust, you can’t even tell where you are on the map. Once you’ve figured out that you can place flags that show your position, (lord help you if you run out, or don’t realise flags are even a thing) there’s an extra bit of faff where you need to place another one so you can work out which direction you’re facing.

It gets worse. The world is riddled with cliffs, which means you can’t simply head off to your destination and expect to get there. On more than one occasion I got badly lost, foolishly thinking that I could explore a new area on my way home. Whenever you’re in the Dust your oxygen tank depletes, but you can refill it by spending the same currency that you use to level up. Repeatedly doing that, however, increases the cost - which meant on one adventure I ended up using two levels worth of currency to avoid death. It was horrible, and not in that fun "you against the elements" kind of way. 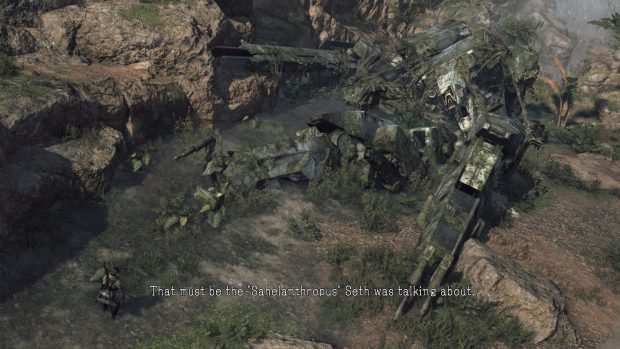 In fairness, some of the survival elements did get a little less bothersome after I discovered the joys of milk and corn. On one long, near fatal meander I stumbled across a corn field, as well as the schematics for some goat cages. A few farms and goat fultons later, I had a steady supply of food and drink. Other elements got less annoying, too. The cost of repeated oxygen filling became insignificant, so I could stroll around the Dust almost as much as I liked. I crafted guns and grenades, giving me effective emergency buttons that served to punctuate combat with moments of excitement and panic, rather than grimly inevitable death.

Despite those improvements, there came a point where I was ready to call it a day. Every mission still boiled down to minor variations on the same basic defense task, against waves almost entirely comprised of the boring genero-zombies. Then a plot thing happened, and suddenly I was transported to a whole new area with varied enemy types and a radically different look. 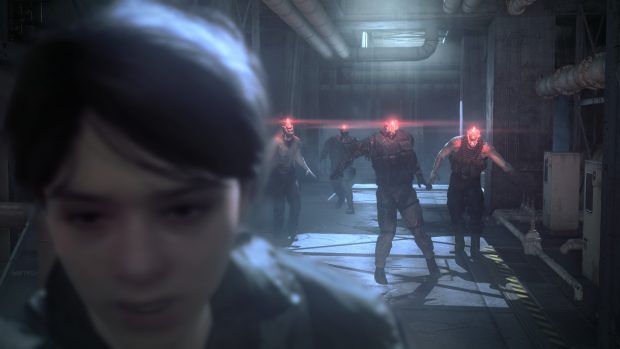 It’s maddening that those varied enemies are reserved for the last third of the game. In the new zone, fast stalker type zombies would leap and strafe around me, encouraging me to adopt a stealthy approach to exploration rather than haphazardly charging around. On defence missions, enemies equipped with mortars and chain-guns broke me out of my usual passive defensive style, forcing me to head out and deal with them.

Then, soon after, the game seemed to forget about all those interesting new enemy types, and sent me back into the same scenarios I’d been contending with during the earlier parts of the game. I ventured into another ruin, yet again struggling with a claustrophobic camera that had undermined similar early sections. I had to complete a 15 MINUTE long defense mission, where I repeatedly died in the last few minutes. 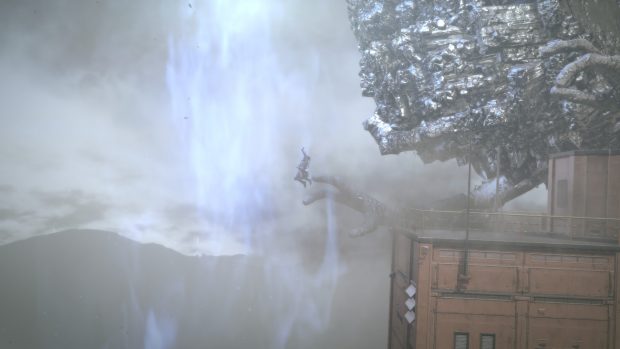 Metal Gear Survive is sorely in need of greater variety, though it would have made a world of difference had Konami just spread what they did have through the whole game rather than taking an age to change things up. And that's not just true for enemy types. Bizarrely, there’s a whole subclass system that most people won’t even realise is in the game: you only unlock them at the very end of the campaign. Saving the best toys for a point in the game that most people will never see is a baffling decision, but a representative one. Almost every step of the way, it feels like Komani have come up with good ideas, then done their best to sabotage them through poor pacing and systems seemingly designed to get in the way of fun rather than provide it.

Take the defence summoning. It's pretty neat, but over the whole game I was stuck using the same iron fences and barbed wire blockades. I know that more interesting traps and defences exist, but they’re either in containers I never found or reserved as post-campaign rewards. I mean, just look at this:

It pains me to think how much more I might have enjoyed myself if I'd gotten to mess around with traps like that.

Metal Gear Survive is the game I want it to be about... 10% of the time. When there’s a rare section where stealth is the best approach. When I just manage to defeat the final wave on a protection mission, thanks to strategic placement of defences. When I’m thinking my way out of a tense situation, moments away from being overwhelmed - by zombies, rather than starvation or suffocation.

Most of the time though, it’s a game that goes out of its way to be repetitive, frustrating and dull.