Swords. Castles. Peasants, knights, shieldmaidens, queens, kings, princes, bandits and men at arms. Games often draw on certain aspects of medieval history, whether they're using it to add colour and flavour to a limb-lopping action game, swords 'n' sorcery platformer or fantasy RPG. But there's more to the period than grim warriors, noble (and cruel) kings, and dank dungeons. A few games, including The Witcher 3 and Crusader Kings, dig beneath the surface to capture some of the mystery and wonder of a time thick with superstition and folklore, but the middle ages have many more tales to tell.

There’s a smorgasbord of games set in vaguely medieval times, and each time a new one is announced, there is some familiar moaning: “The middle ages have been done to death,” we hear. “They’re playing it safe, it’s a bland and overfamiliar setting.” The immense mainstream appeal of games like Skyrim or Dragon Age gives further credence to the criticism that the middle ages speak to our lowest common denominator. It’s easy to see why gruff heroes with swords and shields seem so dull because the swords and chivalry setting has been overdone, whether it's in the form of plasticky Tolkien copies or grimy pseudo-realism. Frankly, I’m sick of saving peasants from an ancient evil in Dragon Age, or of bulging muscle men swinging huge swords at each other in For Honor.

It’s a sad state of affairs since any history geek can tell you that the middle ages (all 1000 years of them!) were a colourful time whose glorious strangeness has been almost entirely ignored by games and much of popular culture in general. In an effort to present the horrors of the ‘dark ages’ to a gasping audience, creators are quick to drain all the colour from the setting. Wars, poverty and pestilence were real, of course, but so was everything that gives the period some complexion; its whimsical imagination, its (to our eyes) utterly outlandish customs and beliefs.

Let’s take a look at a few examples. Bestiaries are common in fantasy games, but I dare you to find one that is as fantastical as the actual bestiaries of the middle ages. In those lavishly illuminated animal books popular in the high and late middle ages, you’ll find stories such as that of the beaver that is hunted for the supposedly medicinal properties of his testicles. Fleeing, he bites off his own scrotum and throws it at his pursuers – it’s an allegory, we are told, admonishing us to throw our sin from us as we run from the devil like the virtuous beaver.

On a related note, think of the Holy Foreskin of Jesus Christ, which was a revered relic and, interestingly enough, the prized possession of several different churches. Religious institutions like Dragon Age’s Chantry with its Urn of Sacred Ashes are a staple of fantasy games, but I have yet to see one that comes close to being as fascinating as the byzantine Moloch that was the medieval church. 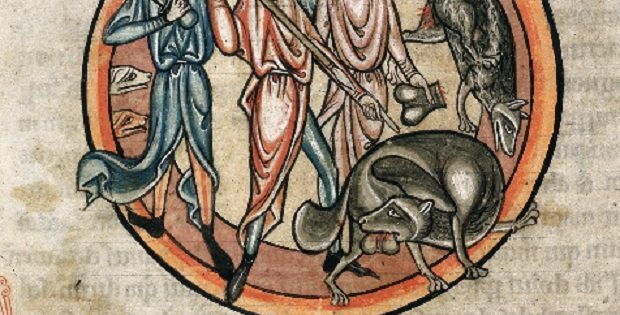 A pursued beaver biting off his own testicles. Harley 4751, f. 9v. British Library.

There’s just a handful of games that capture some of the strangeness of medieval times. Chief among them is The Witcher 3, a game whose often grim fantasy world never gets in the way of an amazingly varied interpretation of a broad period in our own world's history. In spite of its grimy violence and ‘save-the-world’ quest, there’s a lot of humour, colour and humanity, but some of its most vivid, lurid strangeness can be found in the darkest corners.

The sprawling quest lines surrounding the Bloody Baron are a highlight in this regard. In the course of your dealings with the Baron, you’ll encounter the tricksy Johnny with his folksy charms and wordplays, a sinister spirit imprisoned in a twisted tree striking dangerous deals, the terrifying Crones that lure children into the woods on their Tail of Treats, and the Baron’s stillborn infant that returns as a monstrous Botchling. There’s a lot to unpack here, a wide range of folklore beliefs and fairy tale tropes mixed together in a rich potpourri. It’s morbid, weird, compelling, and deeply rooted in stories whose origins reach back across centuries. 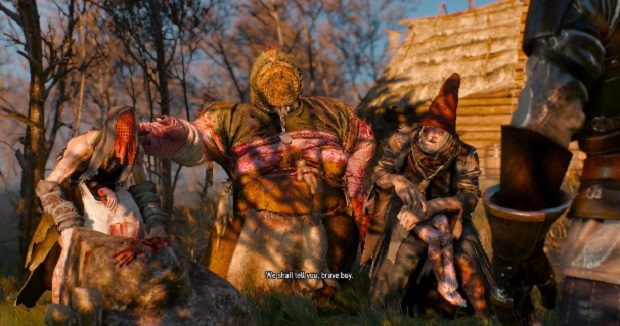 The Witcher 3 is a great example of how the creative license of a fantasy setting can bring the stranger elements of the past to life. While it’s a shame that the main plotline sticks to a more familiar course, there are dozens of imaginative scenarios and distractions along the route. Between those stranger sidequests, the real world 12th century account of a goose and she-goat who were believed to be inspired by the holy ghost and almost led a crusade would not at all feel out of place. 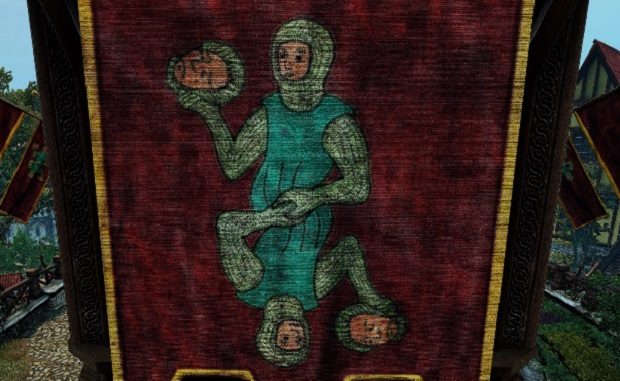 The heraldry of The Witcher 3, too, captures some of the medieval imagination

There are other games that touch on the medieval mindset, of course. The Elder Scrolls III: Morrowind may not seem an obvious choice, seeing as its giant mushrooms and towns made from plants seem to have little to do with the middle ages, but in terms of what it has to say about messianic religions, prophecies and the transmission of historical knowledge, it taps right into central issues of the period. If you delve into one of the many temple libraries of Vvardenfell, you’ll find countless books full of sermons, spiritual wisdom, origin myths and historical accounts, genres that bear a striking resemblance to those popular in the middle ages. Reading these texts feels like being immersed in a truly unfamiliar world view that that emerges from a historical context that feels alien, yet real.

And just as in supposedly historical accounts, there often are several contradicting versions or interpretations of the same story. How did Indoril Nerevar, chief saint of the Tribunal Temple, die? Will he be resurrected as the Nerevarine as the prophecies say, and if yes, which one of those who claim to be this messiah is the real one? Fierce disagreements about these questions separate the various factions and splinter groups of Vvardenfell, and lead to the persecution of heretics by the Temple. Morrowind creates a complex patchwork of beliefs that may not be as strange and impenetrable as those of the middle ages, but share some of the same qualities. 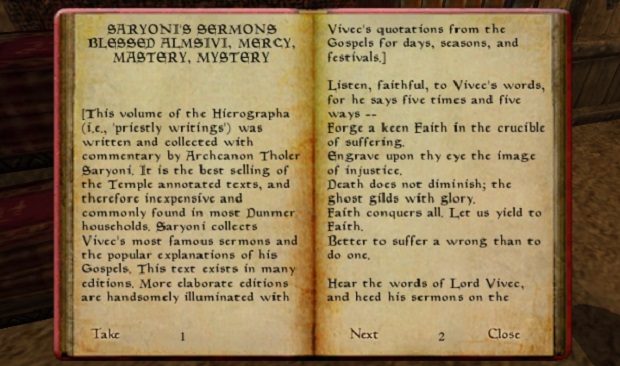 The actual history, as opposed to the imagined history, of the middle ages was marked by near-constant religious dissent and upheaval. Countless heresies such as Catharism, which stated that the world was created not by God, but the devil, or Lollardy, a ‘proto-Protestant’ reform movement, sprung up all over Christendom despite the best efforts of papal inquisitors. There were also plenty of prophets and messiahs. Take the strange story of Pseudo-Baldwin.

The real Baldwin IX, Count of Flanders, was killed soon after capturing Constantinople in 1204 and being declared Emperor, but after a while there were rumours that he hadn’t really died and would return one day. Twenty years later, a beggar and hermit appeared and, for reasons that are unclear, was embraced not only as the returning count, but also as messiah. He and his devoted followers - who drank his bathwater along with other acts of devotion - instigated a holy civil war against the real Baldwin’s daughter, Countess Joanna.

Revered and powerful as he had become, he was soon exposed as a fraud and, after much chaos and unrest, finally captured and hanged (see Norman Cohn’s The Pursuit of the Millennium for a host of stories like this).

You might be familiar with some of these heresies, and even dynamically generated stories like the one above, because of Crusader Kings 2, a game notorious for its tendency to spin highly entertaining emergent tales of secret incest and political assassinations against a backdrop of diplomacy and holy wars. Despite its dry appearance, Crusader Kings contains a great deal of whimsical (though dark) humour. I’ll never forget the time I was regent of England and tried to instigate a ‘tragic’ accident involving the children of the late king, and failed time and time again until I was discovered and thrown into the dungeon, a shell of my ambitious former self. Or that time my only heir insisted on serving as a mercenary for the Byzantine Emperor, only to return blinded and castrated, plunging my proud Viking realm into utter chaos.

More generally, Crusader Kings 2 teaches you a medieval way of looking at a world order that’s utterly strange and almost unfathomable to modern eyes, where weak kings routinely struggle for power with their own vassals, and where personal relationships and bloodlines dictate the fate of political entities that are still in the process of becoming ‘nations’. 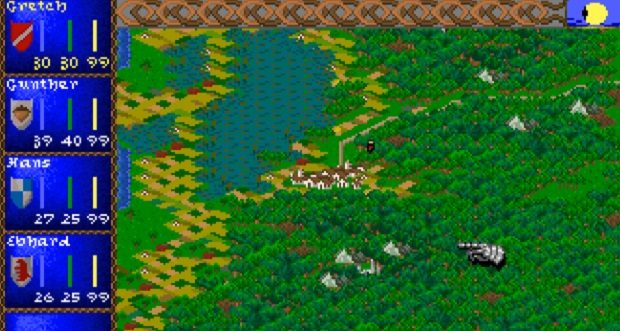 Our brief tour of the digital middle ages ends with Darklands, a perfect example of a game that successfully straddles the line between the historical and the fantastical. Set in the 15th century in the territory of the Holy Roman Empire (roughly today’s Germany), the player leads a motley group of mercenaries, fighting robber knights, brigands and, most importantly, demons and covens of witches. It does a good job conjuring the spiritual uncertainty and paranoia at the very end of the middle ages, a period during which the foundations for the vicious witch hunts of the early modern times were established. Behind every corner, there are suspected conspiracies, witchcraft and whole villages of devil worshipers engaging in perverse rituals.

Those are just three of the very few games I can think of that buck the trend of presenting the middle ages as a bland porridge of pseudo-historical ideas and adolescent fantasies. Like a wholesome witches’ brew, they restore some of the complexion of an ailing period that is still sadly underrepresented despite the omnipresence of swords and castles in games. Drawing more inspiration from the stranger stories of the middle ages wouldn’t just make games more entertaining, but also more valuable from a historical perspective, revealing that the past isn’t a commonplace populated by clichés, but a vibrant, in many ways alien world, of its own.