"I... I wonder who the bad guys are in this game." That's Samuel Malone, game director at Vaulted Sky Games, now deep in thought about the moral message behind his upcoming 4v4 prop hunt 'em up Midnight Ghost Hunt. It's about ghosts who have to hide from their would-be-busters, possessing household furniture in an attempt to survive till midnight. I've just asked him if the ghosts have actually done anything wrong, and he is equivocating.

"It depends on your perspective, I guess. Maybe the people who own the houses they're haunting don't like having them there. Maybe they're trying to sell the house and there are ghosts messing up all the furniture." This isn't satisfactory, and Malone knows it. Is spectral vandalism really a bust-worthy offence?

"I suppose they're not really..." Malone trails off. Riddled with doubt. "It's probably the hunters, they're probably the bad guys... or maybe they're both bad guys. Maybe they’re both just neutral. That's a great question - I don't know!"

With that settled, I move on to less pressing concerns. Why has nobody tried to do a fully fledged commercial prop hunt game before?

Malone first points me towards Witch It, an early-access fantasy prop hunter with over 2,000 "very positive" Steam reviews. Then he very kindly moves past my failure to research the basic premise behind my question, and answers me anyway. "You know with Garry's Mod it's just the T-pose guy who becomes a copy of whatever he's looking at - you need to give it context."

"You've always seen if you go into a haunted house there's a floating chair - 'ooOOOOOooo' - you know." He and his team are riffing on that, Malone tells me, while "twisting the gameplay with the props fighting back". My respect for Malone increases in proportion to the decibels his ghost impression has reached in a busy hallway. I ask him more about ghost attacks.

"Before midnight, they're weaker but they can attack - and if you get a headshot, depending on how much you charge up your attack, it will knock out the hunter." Then he's out of the game - "unless he can get helped up by a friend." He often can't.

Malone then told me, animatedly, "a common strategy is if a hunter gets off by himself, you knock him out with a clean shot to the back of the head, and then he's like 'come get me come get me'. Then the other guy comes, and he starts helping him up, and then he's distracted, then you hit him in the back of the head and he's down, and you keep going one by one. The main enemy of the ghosts is really just the hunters sticking together."

Malone's enthusiasm is becoming increasingly infectious. Especially once he starts enthusing about doors.

"You can control the doors too, so you can split them off", he says. "You can become the door and smack people with it. You can basically be anything". He's particularly fond of being a fridge. It's slow, but has loads of health - and more importantly, a functioning door. "You can corner people - the hunters are going to be faster than you, but if you manage to corner them they're like 'no no no' and I'm just like 'hah hah hah'. Smack them a couple of times and they're down."

Malone pauses. Composes himself. "So there's a lot of different strategies that can be done depending on the object." 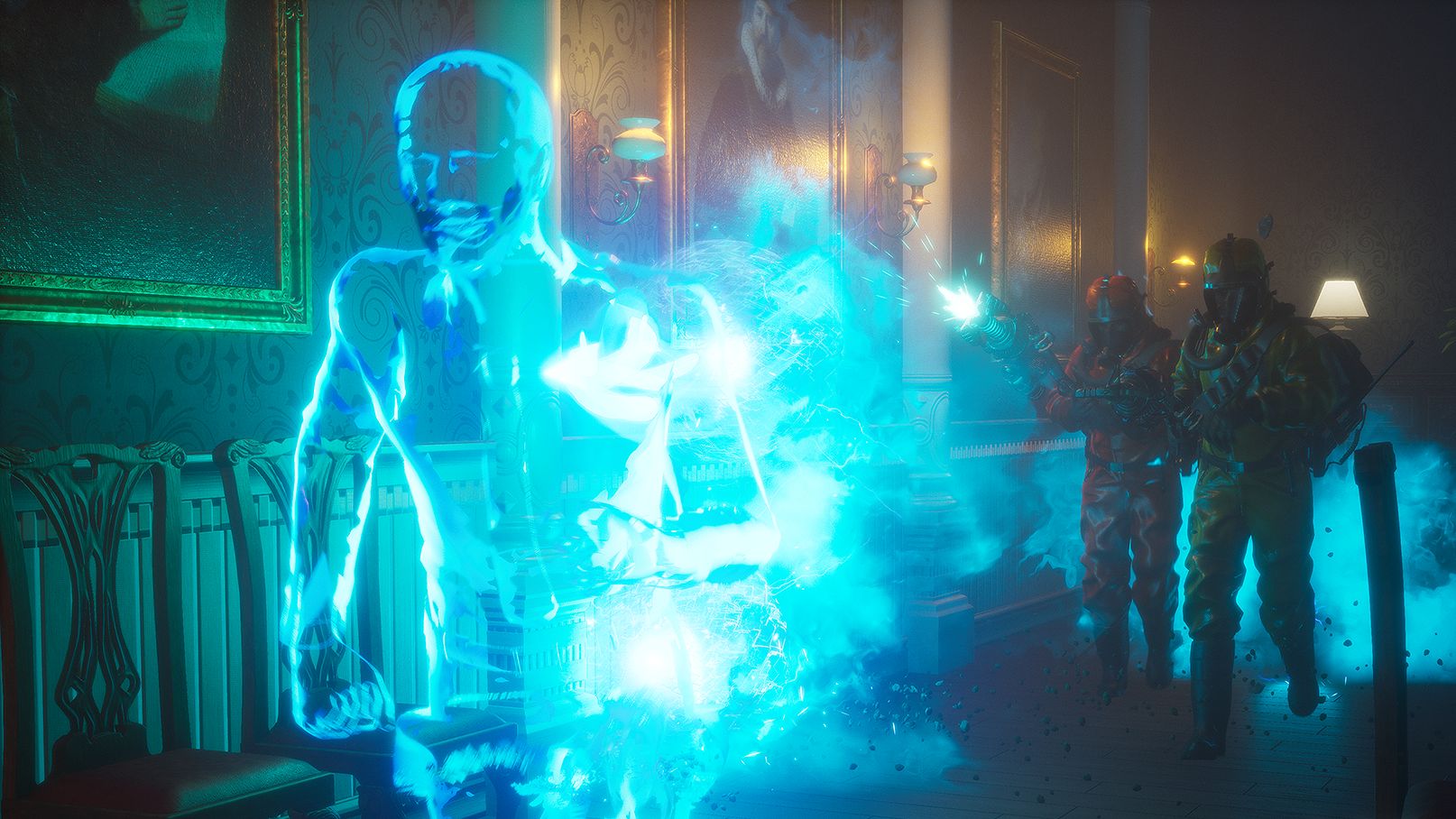 Usually, the ghosts need to be a tad more skittish -- at first. They're trying to survive till midnight, when they grow much more powerful and every busted ghost re-materialises. Then the tables turn, and the hunters need to get out of dodge. I ask Malone for the funniest situation he's been in. He grins, and tells me about his favourite post-midnight debacle.

"So what usually happens is the hunters hole up in a room somewhere, and they can pick up the furniture and block the door. Everyone's like 'OK, as soon as they come in just blast them', so we had one where I think there were two hunters left, all four of the ghosts have come back. So they say 'alright, we have a chance if we can just -' and then at that moment the ghosts bust through and all of the furniture goes flying everywhere, and one of the ghosts comes up and just haymakers the guy, who went flying, and then I think the other guy got hit in the head by a phone, and it went like 'brrr-ding'! It rang as it was flying! Then the guy gets hit on the head and it shatters."

We both giggle. Malone adds: "It's not really a horror game, but there are moments that surprise you. You're like 'wha-uh-ahhhhh', then get annihilated. It's fun."

I rather think it will be. Even if I am still concerned about polter-rights.