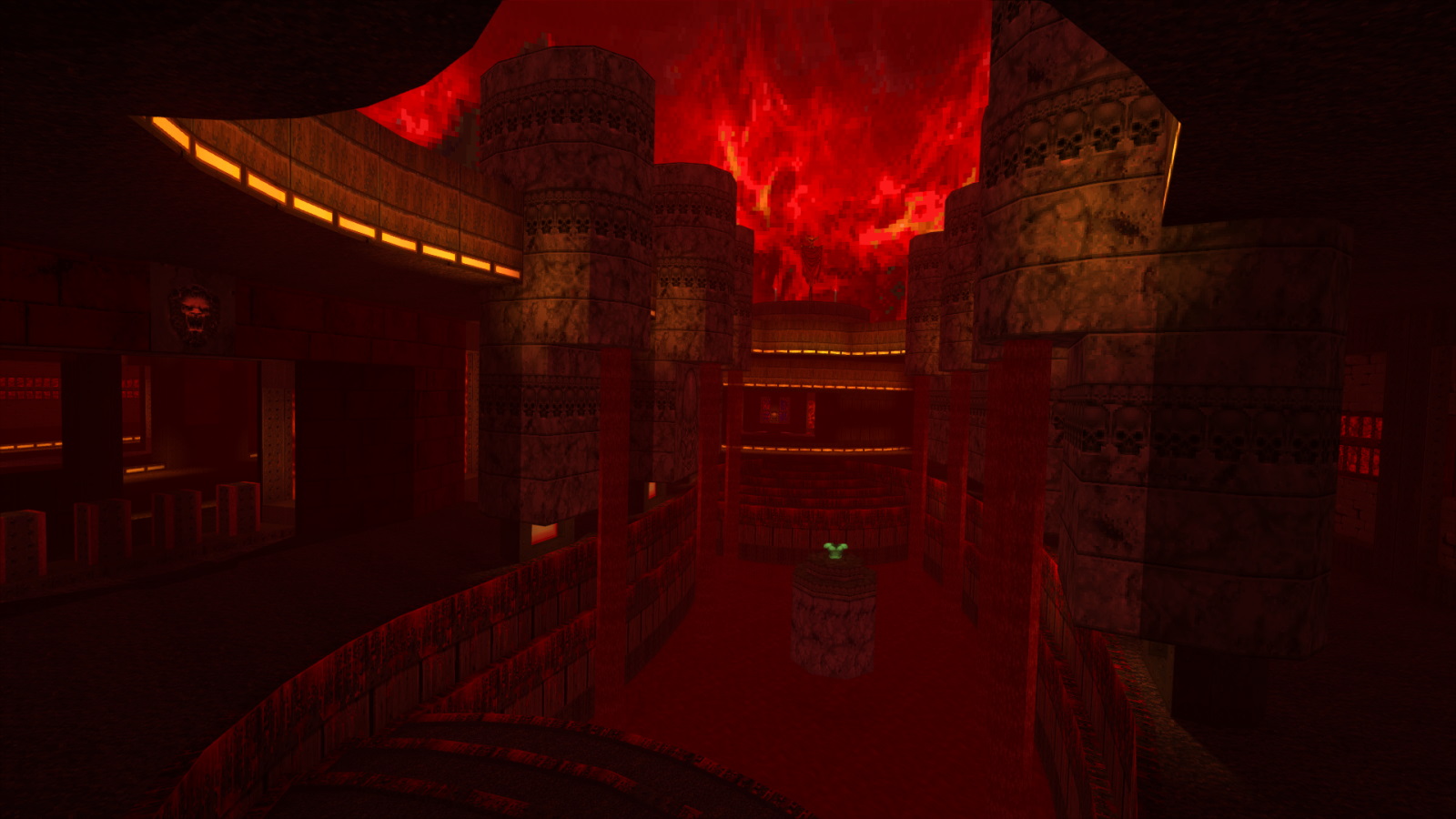 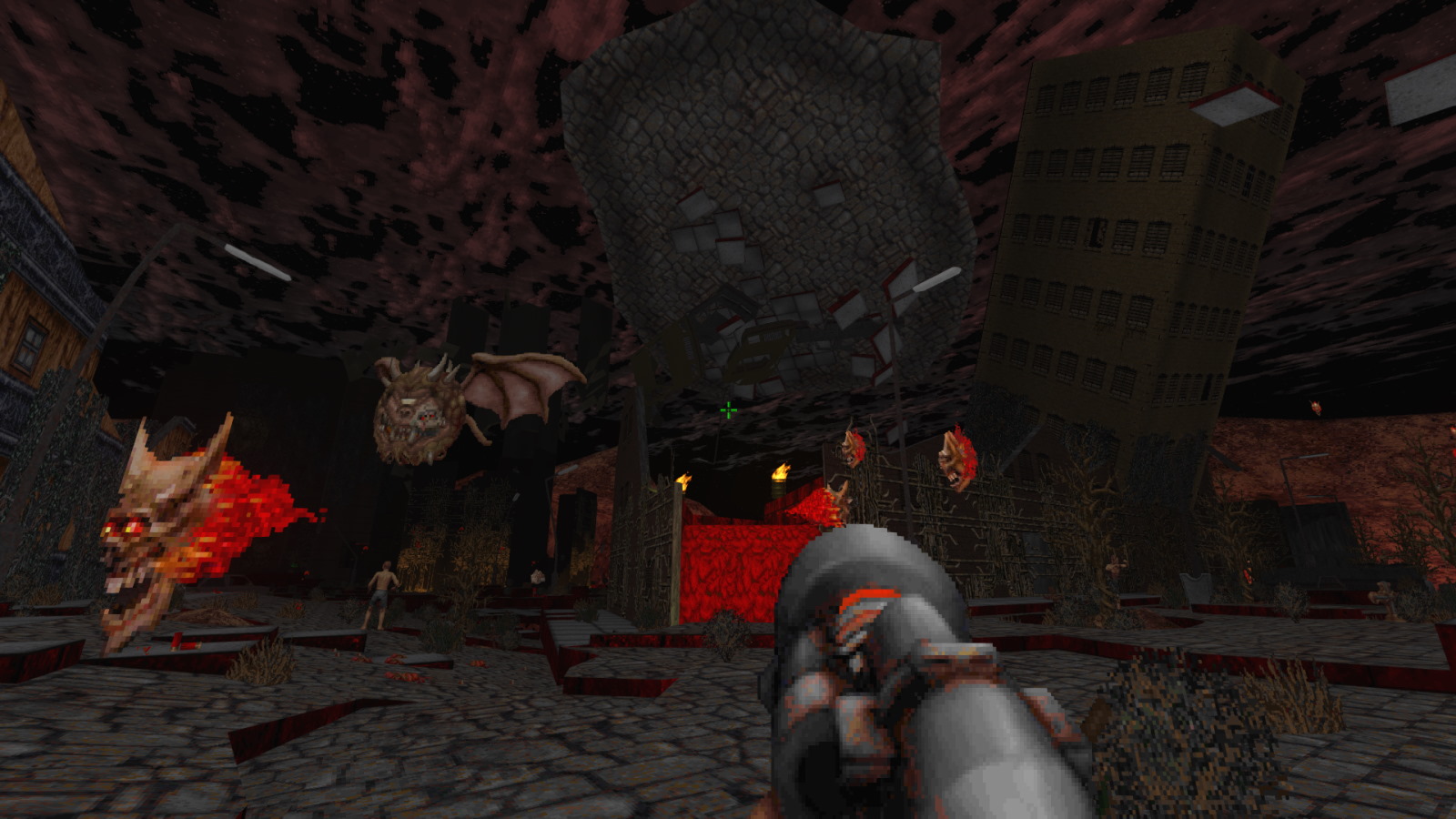 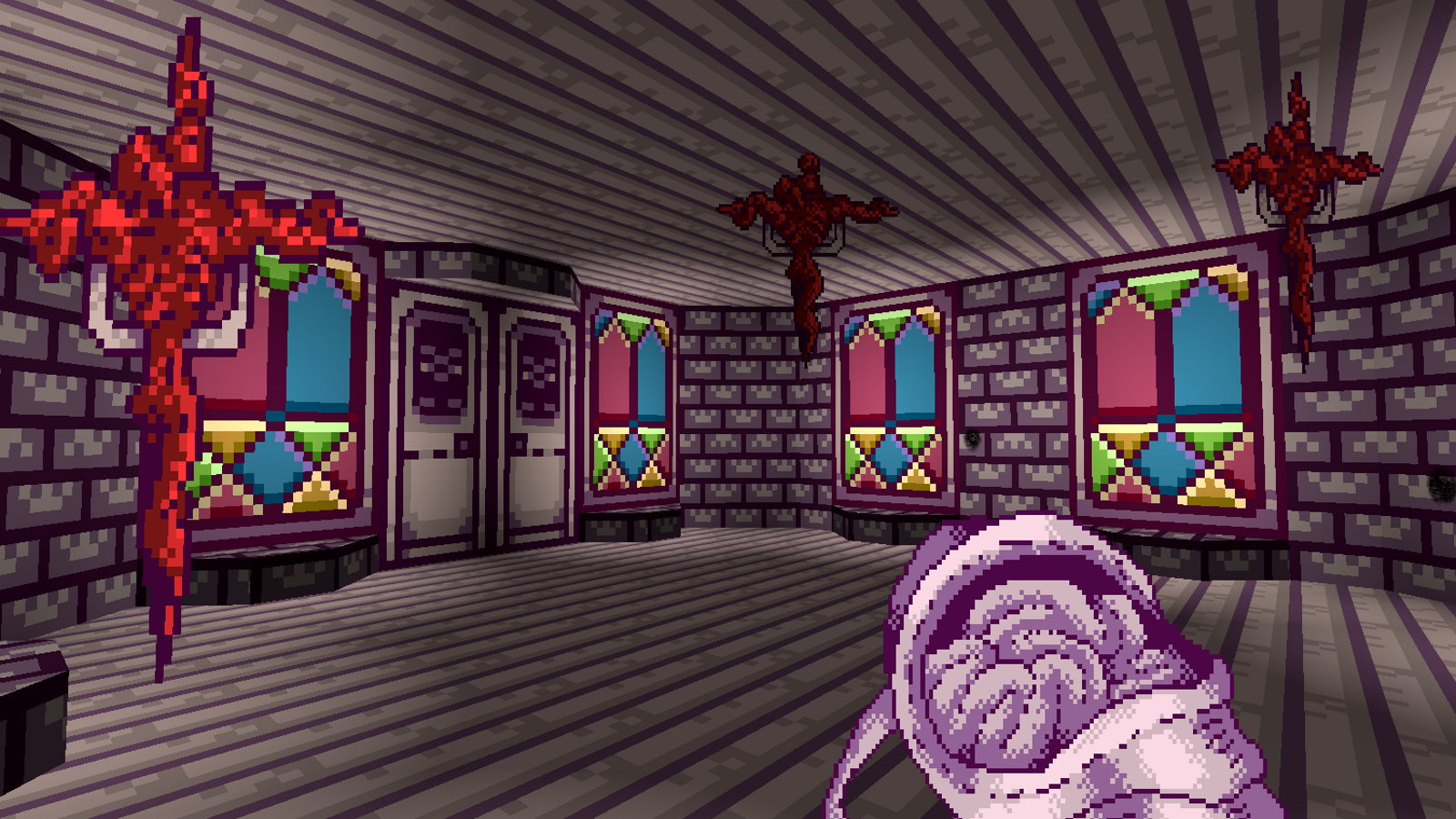 There's only a few weeks left in 2019, and we're fast approaching this year's Cacowards, Doomworld's annual community awards, so it feels only right to see what's been going on in the classic Doom modding scene these past few months.

I'm beating the Cacowards to the punch, really, and giving you a handful of choice picks to get your teeth into early. We've got Doom 4 for DOS, eldritch weirdness, shareware era nostalgia, a crossover with Blood, and an all-you-can-eat buffet of around 2700 levels for the Doomer who can never have too much.

The instructions for running all the mods below have changed very little since I last covered the scene, so check out the bottom section of my 2018 Cacowards coverage for a quick guide to getting this up and running. Don't neglect the extra step to turn off texture filtering, because Doom sprites look awful when they're blurred and smudged. And with that out of the way, here's what you should probably be checking out right now: 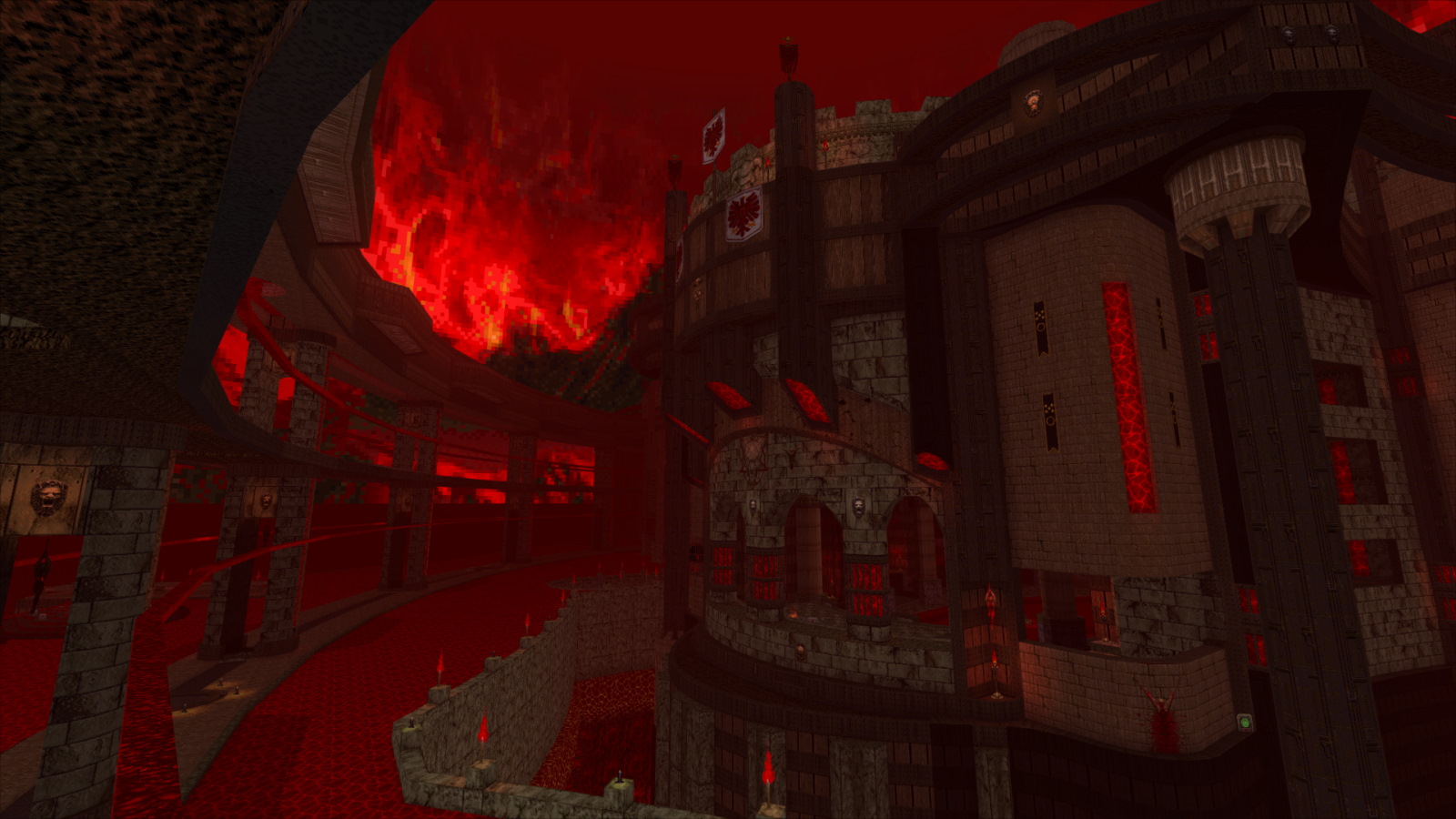 Hurt is apparently the second Doom map that "Elend" has ever made, and the only one released publicly. So, off to a good start, then. Hurt is a single massive level taking advantage of every trick the GZDoom engine has to offer, featuring plenty of new enemy types and capped off with a brooding, ambient soundtrack. It's also absolutely stunning to look at, and full of well choreographed traps and battles. I assume that Elend has oodles of mapping experience in other games, so don't assume you'll be able to do this straight away.

What if Doom 2016 (aka Doom 4) fell through a time vortex and launched for MS DOS instead? If we survived the temporal collapse, it'd probably turn out a bit like this. A mad labour of love by modder "Noiser", it boils down absolutely everything from Id's most recent glory-killing rip-and-tearfest until it'll run on actual early 90s hardware. While most of you will be playing this mod via modern source ports (where it looks and sounds great), a fully DOS-compatible version is included in case you've got a decades-old 386 that you want to treat to something new.

While D4V doesn't have any levels of its own, its retro aesthetic caught the interest of some mappers, and now there's a handful of bespoke maps for it. Chrono-Displacement Labs by "meapineapple" is a single 10-20 minute level which borrows extra assets from Doom 3 for an especially anachronistic feel. Drought by "Tango" is a self-contained three-level mini episode. It's sadly not DOS compatible, as it pushes a bit beyond authentic 90s limits, but that's probably for the best, as it has some great texture art courtesy of the OTEX Texture Set, previously used in the excellent (and previously featured) Eviternity.

Shrine is a very recent release by modder "Scumhead", and a very impressive piece of work for a solo modder. It's a total conversion (but you'll still need the WAD file from Doom 2) with a low-fi eldritch horror aesthetic, but a pure power-fantasy feel to the combat. Playing as a big red demon-looking lad, your faded and monochromatic world is under attack by monsters. It's straightforward stuff, but with a very fresh, chunky look and sound, and fittingly strange weapons

In the very first level, you pick up the Leviathan, the game's plasma gun equivalent, only better. It fires a high-powered beam of death with little pause between volleys, and can melt through most regular enemy types. Shrine's bizarre shark-headed version of the BFG can bloop the final boss out of existence in just two quick hits. If this mod gets any future updates I expect the ammo balance and power of those upper-tier weapons will be tuned a little, but I can't deny that it's satisfying just to cut through an army of weird new monsters like a hot knife through butter.

A silly name for an extremely cool concept. The universes of Doom and Blood have collided, and it's up to Doomguy or Caleb (each with their own distinct weapons and perks) to fight through a twisted, crumbling dimension populated with weird mash-up monsters. What happens when a Doom Cacodemon gets fused to a Blood Gargoyle? A beefy brown skull-spitting meatball with surprising agility, that's what. The maps get the same treatment too, with segments of Blood level tumescent with techno-greebling from the future, while familiar Doom 2 architecture is corroded and overgrown. And all of it is floating in a big weird void somewhere.

It'a a real treat, visually and aurally. A brooding soundtrack, some odd monster noises and some spooky incidental effects capture that classic Blood feel of being creepy without being actively scary. After all, it wouldn't befit a cackling undead cowboy to be scared of the dark. This version is just a demo, though, and I cannot wait to see what the full version brings. If you run out of stuff to do in the four demo levels, you can always play the original Doom 2 campaign with a Bloom makeover. 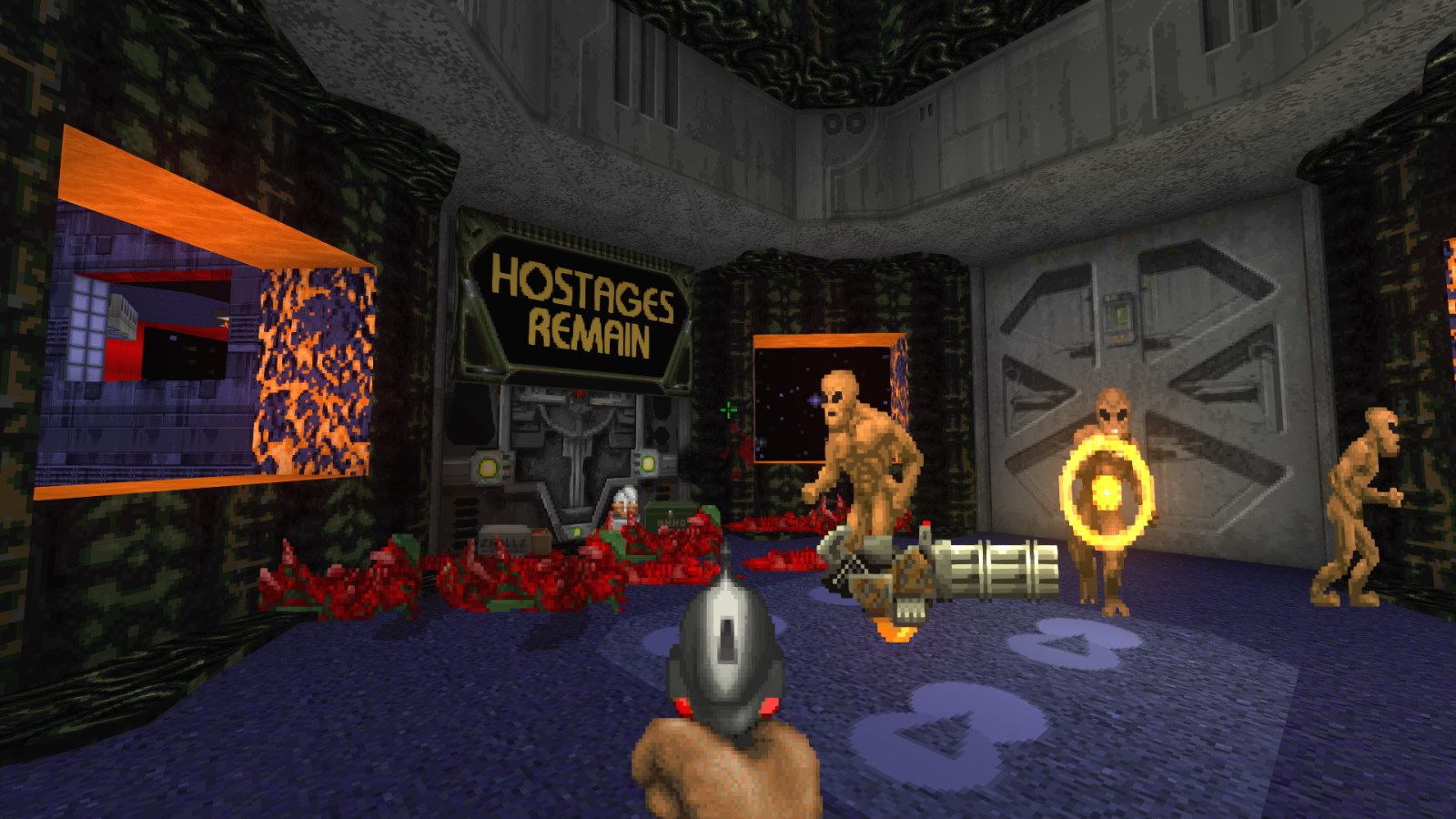 If you grew up playing DOS games through the 90s, there's a good chance you played the shareware version of Halloween Harry, alternatively known as Alien Carnage. Well, he's back, in Doom mod form. While perhaps not the most technically stunning production, Alien Bastards! is a short but sweet nostalgia trip by the Doomer Boards modding crew. It's a partial conversion (so expect it to still mostly play like Doom) with some creative level design and clever use of Duke Nukem 3D and Chex Quest assets in place to make it feel authentically old-school.

The Edge Of Time 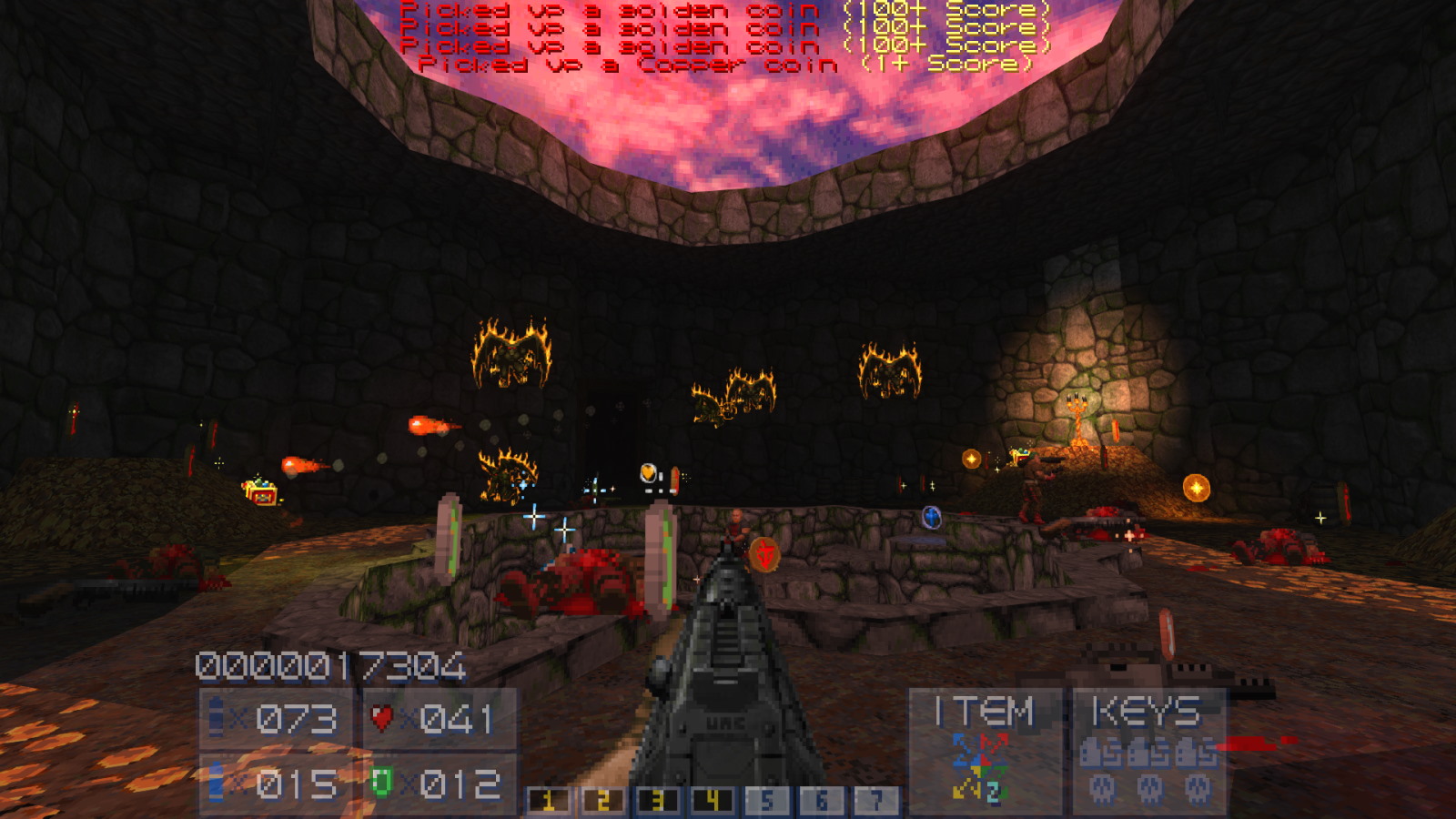 A different sort of nostalgia, now. With The Edge Of Time, modder "FireSeraphim" asks "what if Doom had been developed by SNES-era Konami instead of Id Software?" The result is a big, bold and extremely noisy arcade take on Doom. Pickups absolutely litter the levels, and enemies flash white when they're damaged before exploding into a screen-filling shower of point numbers, additional treasure pickups and bonus goodies.

The Edge Of Time's combat is much less restrained than regular Doom. You can switch between weapons instantly, ammo flows like water, and enemies spawn in willy nilly. All of this would probably collapse under its own maximalist ambition if the levels weren't so great, full of GZDoom trickery and detailing without being overly complex to navigate. It also helps that, aside from a few levels with more downbeat tunes, the SNES-era soundtrack is full of energy, making that push into the next room jam-packed with demons and powerups exciting. Best played in short bursts though - this one can be exhausting.

Compendium and The Sentinel's Lexicon

A duo of evergreen recommendations here, for those perhaps a little behind on their Doom modding and wanting a way to sample the best of the past couple decades. Compendium, assembled by "Dynamo" on the ZDoom forums, is a collection of classic older Doom level packs (over a thousand maps in total) linked through a co-op friendly lobby/browser level. Some of these levels didn't play nice with modern Doom source ports, so credit where due to the maintainer for getting them all bundled up here for easy consumption. An all you can eat buffet of old-school demon slaying.

The Sentinel's Lexicon by "mifu" and crew (see in-mod credits) is similar to Compendium, but focused on more recent maps, usually stuff from the past decade. The majority of it is taken up by nearly fifty regular campaigns worth of Dooming, and another twenty or so designated 'Slaughter' campaigns with sky-high difficulty and a focus on cutting through absurdly huge hordes of demons with your finger glued firmly to the trigger. The only issue to this mod is file-size; it weighs in at over 800mb, but given that there's about 1700 top notch levels here, that's understandable.

"Hey!" I hear you say, "You've covered this one before!" And you'd be right, but modder "WadaHolic" re-launched Total Chaos this Halloween, turning this technical marvel of a mod into an entirely standalone freeware game. The new Director's Cut version adds another three chapters to the story, a body armour system, and new weapons, enemies and inventory items to play around with. For those seeing this marvel for the first time, imagine Silent Hill by way of STALKER - tense supernatural survival horror with crumbling equipment and a complex inventory and crafting system.

It's arguable that Total Chaos isn't Doom anymore. And yet under all those polygons and modern sheen, there lies a simple sector-based map, made with familiar, old-school tools. This is the antithesis to D4V.

Lastly, I want to give a quick shout out to the Twitch channel DoomSpeedDemos. A 24/7 showcase of expert-level play across thousands upon thousands of maps and almost 55,000 recordings. Other people put ASMR on in the background. I like to put this on my second monitor instead. Whether they're playing with pacifist rules (no hurting monsters directly) or clearing entire levels UV-Max style (all kills, all secrets, hard mode), there's probably a few tricks you can pick up from watching this channel. See the channel description for more detailed explanations.

And that - close to 3000 levels, all told - should be enough to keep you going into the new year. Think I missed something spectacular? Have a personal pick for Doom mod of the year? Share, yell, hoot and holler in the comments below.