The series might have fizzled out awkwardly, but I'll always have a place in my heart for Command & Conquer 3: Tiberium Wars. Fast-paced strategy, three campaigns (and one expansion) of cornball FMV, respectably balanced multiplayer and it's good-looking even today. Despite being produced in just one year, EA LA even managed to cram in solid mod support. Cut to present day and there's still a steady trickle of mod releases and unofficial matchmaking servers keeping its community alive. Here's my mammoth (tank) guide to getting into C&C 3 in 2019, and a few notable mod picks. 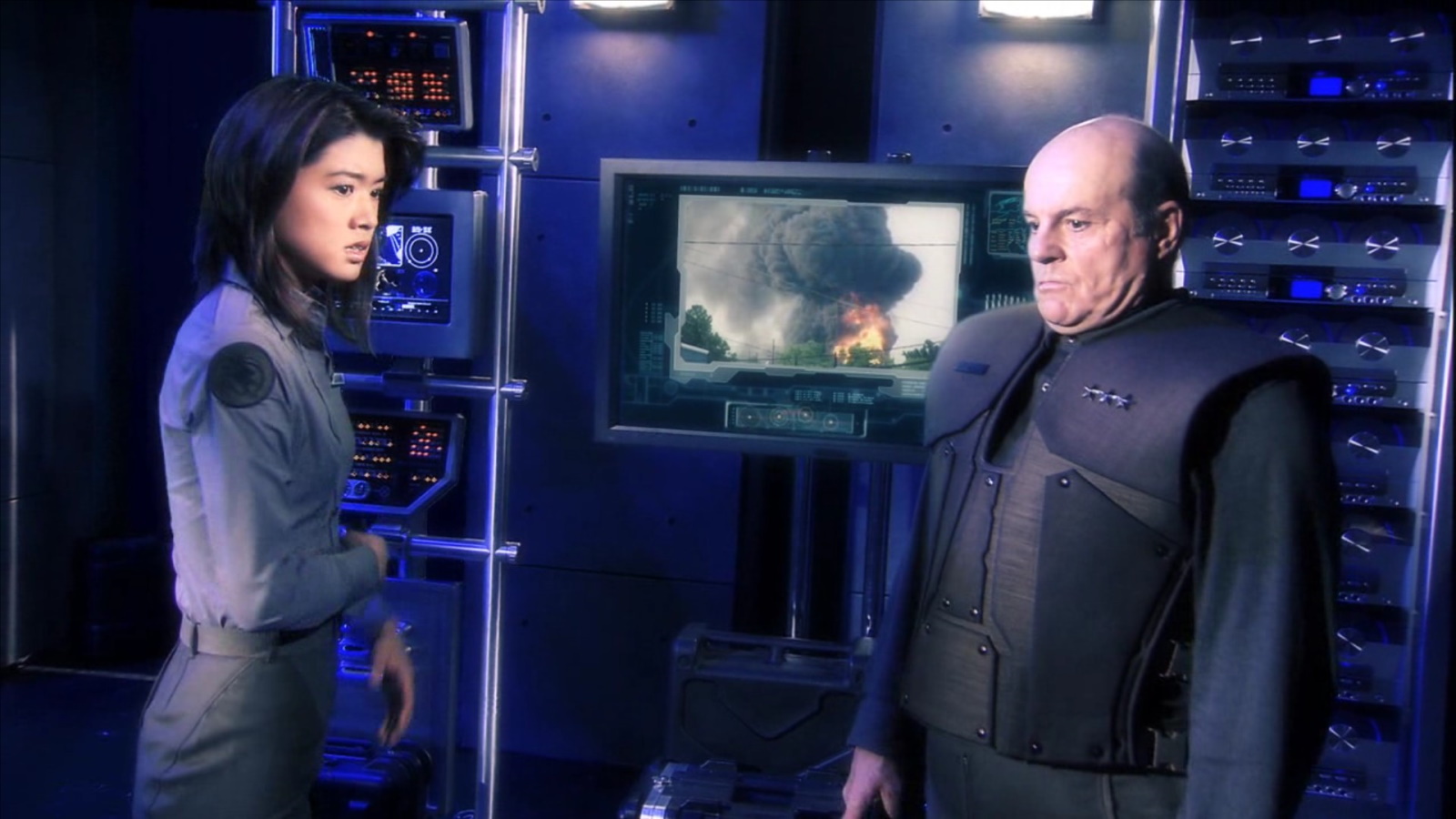 Compared to a some older games, Command & Conquer 3 is relatively easy to get mods installed for and running, but only after an irritating amount of setup. Thankfully this is a one-time process, but we'll be dedicating a larger-than-usual chunk of this column to getting mods and maps running and where to find them. For starters, if you have the Origin version of C&C 3, you'll want to get Bibber's C&C Ultimate Collection Launchers, which fix some mod compatibility issues with the Origin re-release.

Once that's done, the hardest part is putting your mods and maps in the right place. If you're going to be playing a lot of mods, it might help to make bookmarks to these. Mods for the main game and expansion respectively should be placed in the following directories, assuming you're using Windows Vista or newer:

You may need to create the respective mods folders. Each mod's files should be in its own sub-folder, too. And just to be extra confusing, standalone custom maps need to go in an entirely different location, although similarly each should have their own directory.

Fortunately you can simplify installing maps by using the CNC Labs Collective's map manager tool here, but it still helps to know the location.

Launching mods is the easy part, after one bit of setup. If you have the Origin version, create a shortcut to to your CNC3.EXE, right-click on it, open Properties, then add "-UI" (minus quotes) to the end of the Target line. If you have the Steam version, right-click on it in your Steam Library, open Properties, click Set Launch Options and add "-UI" (again, no quotes) there. Launching the game via shortcut or link should bring up an extra menu. Click "Game Browser" for a list of all the mods you have installed, click the one you want and click Play to launch. 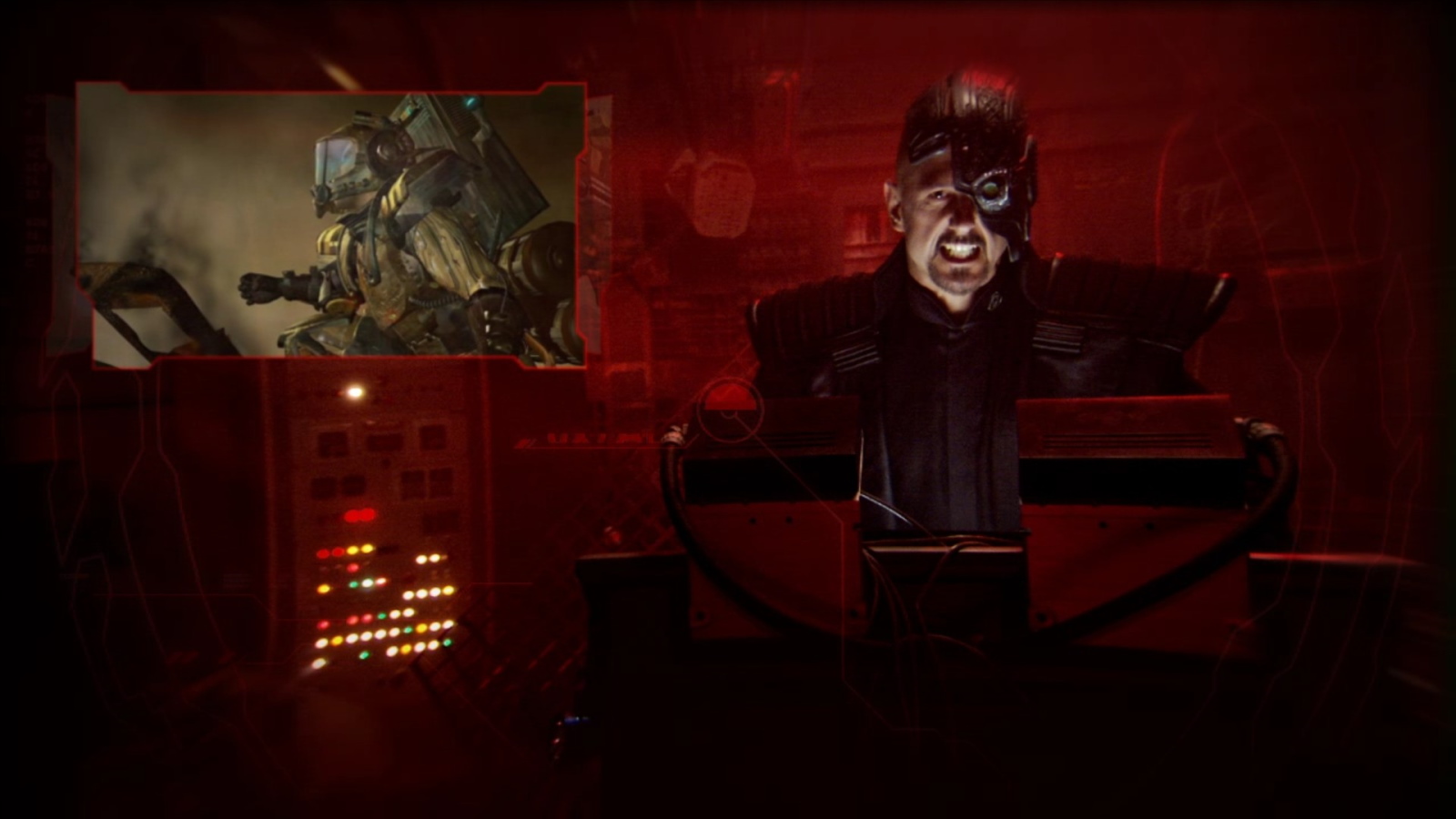 Unfortunately this doesn't work with the Kane's Wrath expansion, for some reason. You'll need Bibber's WrathEd Mod Launcher for that, although the vast majority of mods are for the main game. It does have handy buttons to open your mod and map directories in Windows Explorer, though, saving you having to locate them manually.

Also recommended, whether you're running mods or not, is the 4gb compatibility tool here. Similar to other tweaks for older games, it allows the game to use more RAM, which comes in handy in large matches or when playing mods that add a lot of new unit types. Fewer crashes, less slowdown, no down-sides. Just unpack it, run it, and point it at your Tiberium Wars (CNC3) and Kane's Wrath (CNC3EP1) EXE files. It'll make a backup just in case, but this should be a one-off fix.

Lastly, if you want to play online, you'll need to sign up for and download the C&C Online Launcher. The series used the now-defunct Gamespy network for online matchmaking, but the community have come up with their own alternative. At any given time you'll find a few dozen Kane's Wrath and Red Alert 3 players around, and a larger number playing C&C Generals. This step is, of course, entirely optional if you're just planning on playing solo.

Tuning Up The Campaign 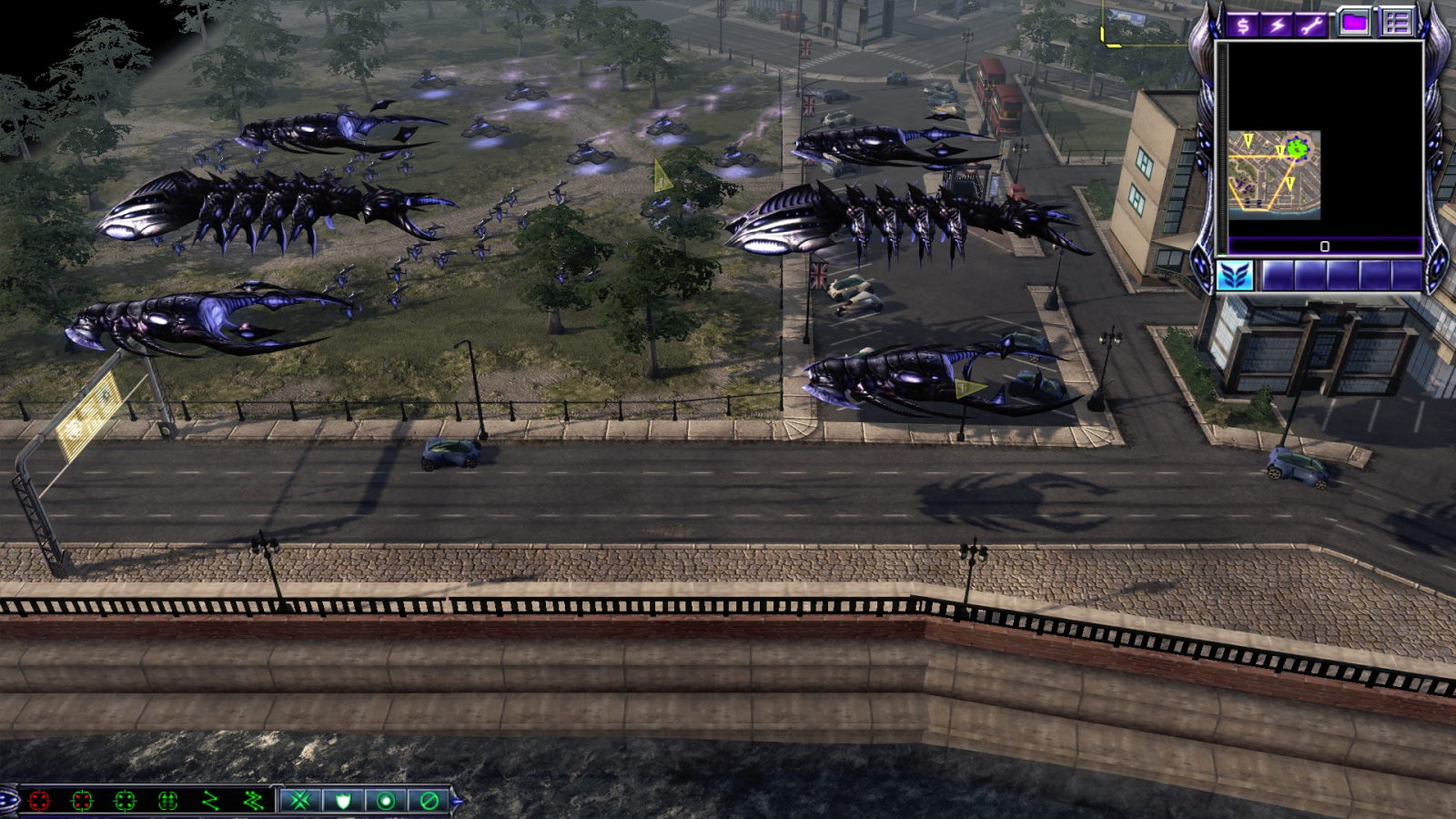 With all that tedious rigmarole out of the way, you'll probably want to brush up on how to play. Whether you're a returning player or newcomer, a spin through the original campaign missions is never a bad idea. Unfortunately, patches intended to make multiplayer a faster, more reactive game ended up throwing the story balance out of whack. Fortunately there are a couple of mods to fix this.

C&C 3 Original by "PurpleGaga27" and Kane's Wrath Classic by "egozi44" keep all the good stuff from patches to the main game and its expansion, but roll back many of the economic changes. Given that the enemies in the campaign flagrantly cheat, those changes affect the player far more than the AI. Depending on when they were released, user-made missions may also play better using these mods, too.

Once you've dusted off the cobwebs, those wanting to flex their micromanagement muscles should check out Shaka Zulu. It's a single solo mission for Kane's Wrath, but it's a good'un, despite the eyebrow-raising title. Playing as GDI, you're initially on the back foot, holding off huge waves of Scrin, before uniting with other human forces to push back against a massive alien base.

It would be positively amateurish to talk about C&C 3 mods without a round of praise for The Forgotten. A fan-made expansion Developed by the C&C Labs collective, it's probably the most ambitious single-player mod for the game, and while it's nearly a decade old now, a new version rolled out just a few months ago.

The Forgotten adds a fourth playable faction to the game; the titular Forgotten, Tiberium mutants caught in the crossfire between GDI, Nod and the Scrin. Sadly there's only five missions, but they're lengthy multi-stage affairs, challenging and with their own look and feel. The foggy green Tiberium wastelands make for a visually distinct environment, and being mutants, Forgotten infantry can heal themselves by hanging around in Tiberium fields.

The Forgotten even has FMv mission briefings (though the actor looks more like a fresh-faced IT than a grizzled former spy). The fact that there's FMV at all puts this head and shoulders above its peers, and it's a pity that no others tried to follow. 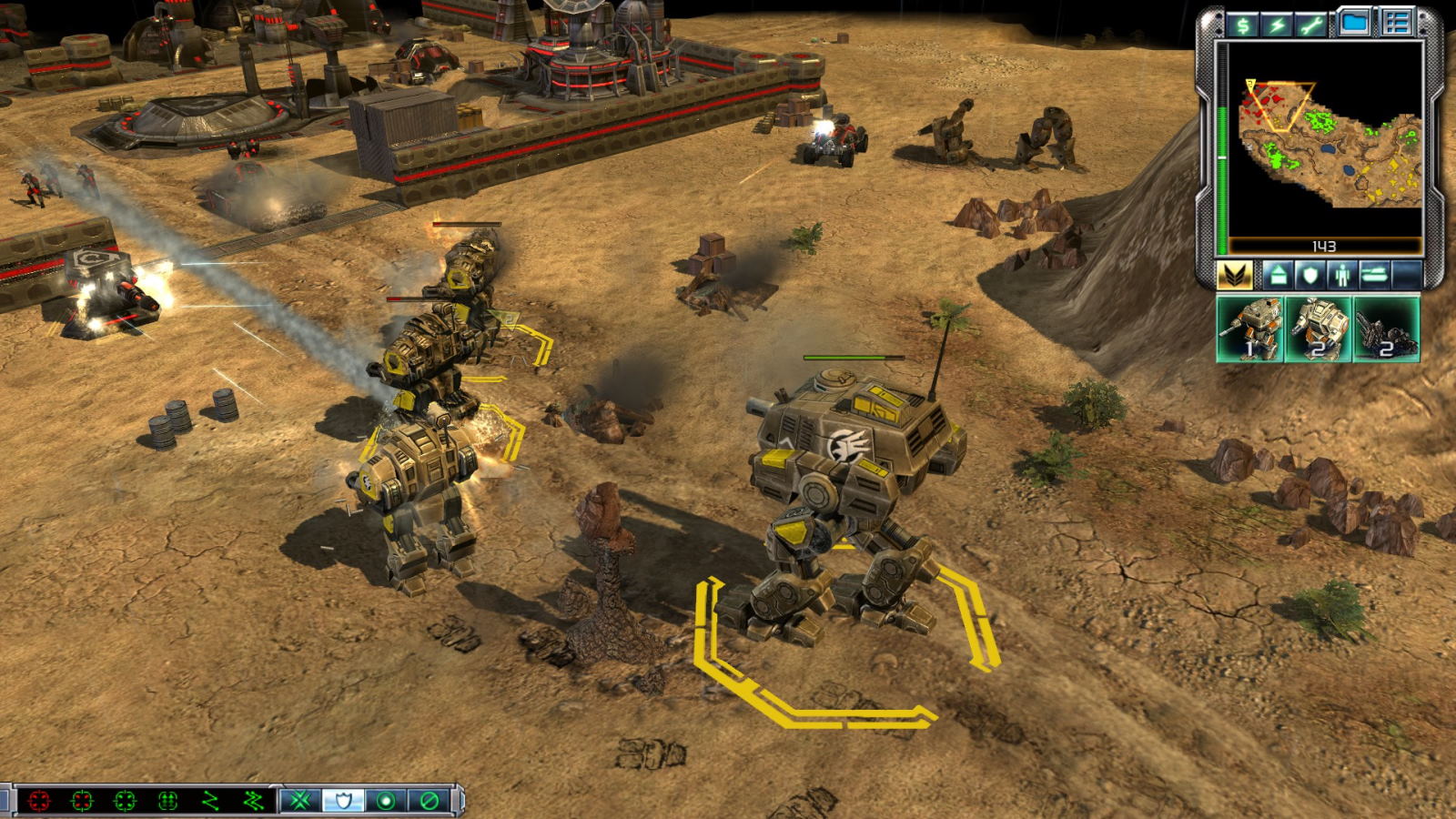 Of the multiplayer and skirmish-centric mods out there, Tiberium Essence is among the best and most popular, with a major update rolling out earlier this year. It overhauls all three regular factions, putting a greater emphasis on mech combat, with a lot of returning units from C&C 2: Tiberian Sun. It also features its own bulked-up take on The Forgotten, who feel significantly less rag-tag here. For the best, really, because they're going up against battlefield-dominating monsters like the Mammoth 2 walker.

Tiberium Essence may not have any campaign missions of its own, but fans of the mod have stepped up to fill that void. Revenge Of The Forgotten by "ThatFinnishGuy" is a five-mission solo campaign focused on everyone's favourite mutant faction. Also set in the same timeline are Nod's Revolution and The War The End All Wars, both developed by "playmsbk" and each adding another five Nod-centric missions. All of these are intended for play using the older version 1.4 of Tiberium Essence, but newer versions may work too.

Forgotten Dawn by "RedDeadSmeg" is another six-mission run, this one intended for use with the recently released Tiberium Essence 2.0. There's a smattering of other solo missions on Mod DB's Tiberium Essence Addons page too, including some for the Scrin, and (of course) several multiplayer map packs. Plenty to keep you going, and it's always a good sign for a game's health when even its mods have their own mod scenes. 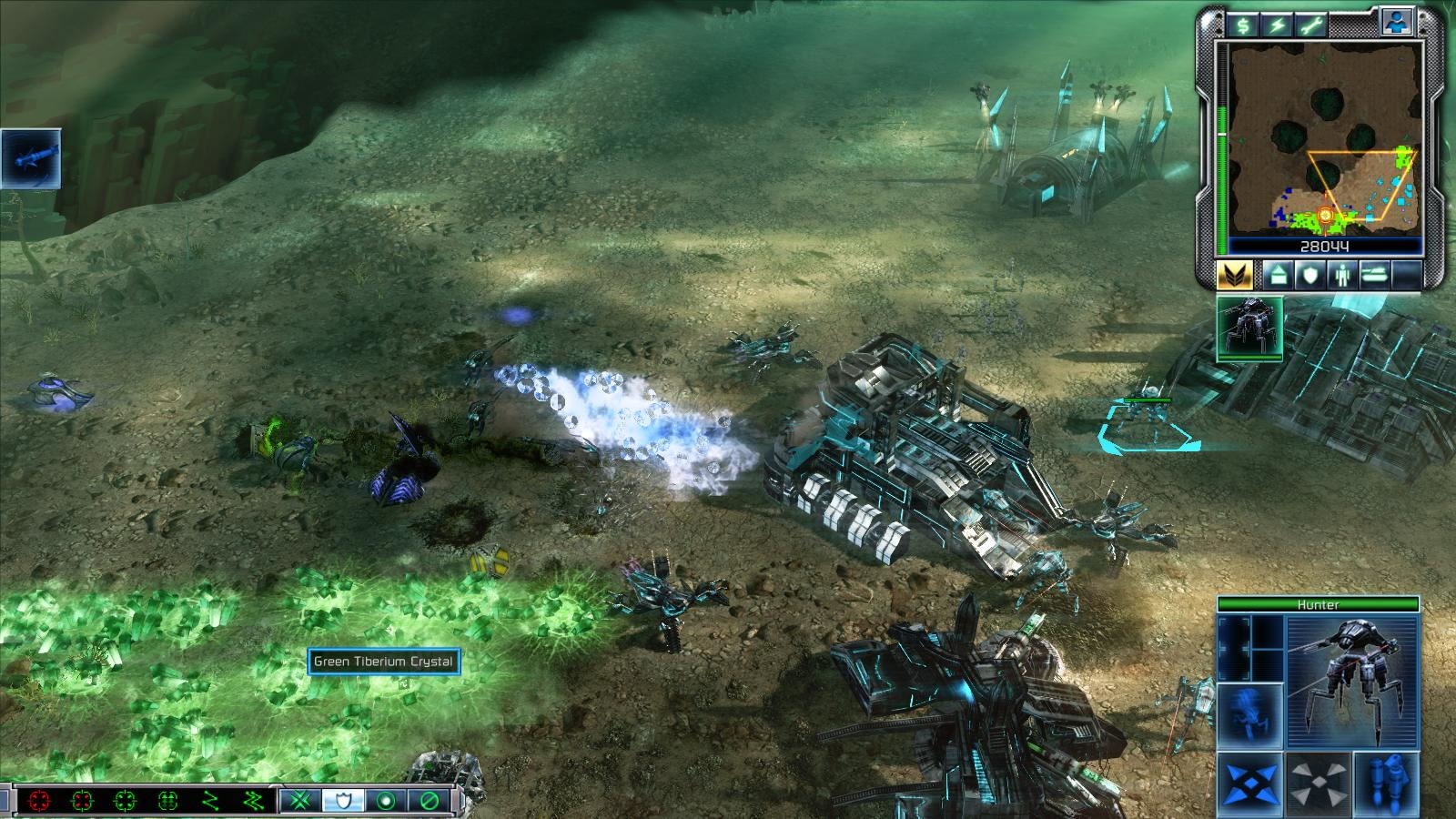 Another faction mod worth a spin is Tiberium Secrets. While "Honor Games LLC" want to add three factions on top of the regular trio, the recently released version 1.40 has one of them playable and with basic skirmish AI already. Even in this early state, it's well worth a look because of how radically different the Terminator-inspired ASI are from anything else in the game. They're a rogue robot army with a wildly different economy. Instead of a construction yard they have a mobile drone-factory that can build stuff anywhere, and all of their units drain power like buildings. If this is just the first of three armies to come, I really hope development on this one continues. 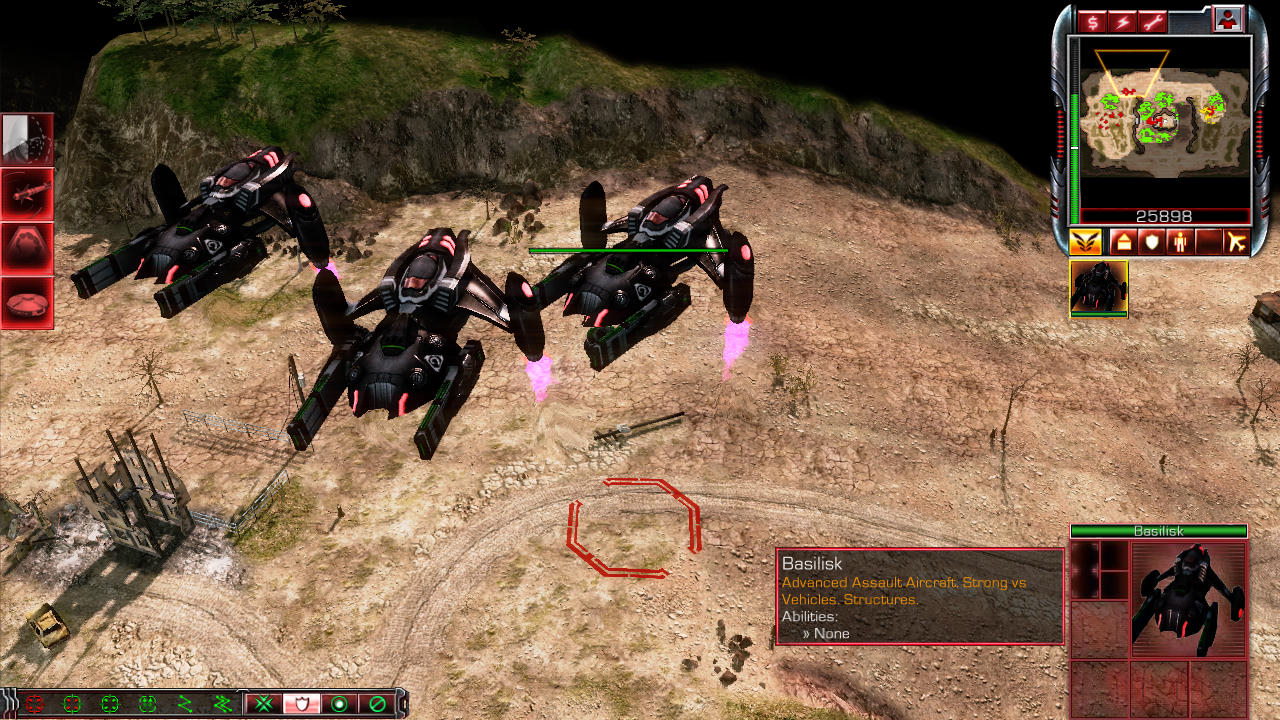 While there might be life in the old gal' yet, not everything lasts forever. Kane's Wrath Reloaded by "PurpleGaga27" is another popular mod that officially wrapped up in 2017, with no more updates planned. It ports the factions and units from the Kane's Wrath expansion back to the main game while rearranging and rebalancing them a bit. Oh, and there's a few extra units from the much-maligned C&C 4, because why not?

While ostensibly intended for skirmish and competitive play, Kane's Wrath plays it fast and loose with balance, which makes it ideal for solo or co-op 'comp stomp' scenarios. A pair of skilled players up against a Brutal difficulty AI results in a ridiculous meat-grinder, as the computer just pours seemingly endless waves of attackers into your turrets.

A Brighter Future Than That Fourth Game

The C&C 3 mod scene might have shrunk a bit in the past few years, but that's not to say there isn't more stuff on the horizon. Keep a close eye on Evolutions, a Halo-themed mod by "363 Productions" that apparently has plans for a 2019 release, and is currently in closed testing. Similarly, Tiberian Sun Rising by the "TS Rising Team" is due out soonish, and is a very fancy looking remake of C&C 2 in the sequel's engine. Even if the series (and traditional RTS genre, really) has fallen out of vogue, it's great to see it still hanging on, entirely through the efforts of dedicated fans.