Almost five and a half years ago, I made my RPS debut looking at what creative modders for Tabletop Simulator were doing. While frequently of grey legality (the majority of items on the Steam Workshop are still unofficial digital reproductions of expensive physical games), the platform is still thriving. Official adaptations of games for Berserk's virtual play-space are now sold more readily, but few take quite as much advantage of Tabletop Simulator's increasingly advanced scripting system like these showcase productions. Here's a few stand-outs pushing the boundaries of what 'tabletop' even means.

For once, there's very little for me to say about the technical side here. TTS is designed to be fully integrated with the Steam Workshop, so everything is just one click away. The only issues to keep in mind are that, rather than hosting art assets on the workshop, most Tabletop Sim projects draw their files from external sources. This means that if any external file-hosting goes down (and some image sources have put up paywalls in recent years), it can break things. Also, the past few major updates to Tabletop Sim have broken some older mods, so expect errors when playing older stuff.

The main obstacle to playing things on Tabletop Sim is learning the games and finding players. If you've got yourself an international board-gaming group it's grand, but otherwise I'll include links to both tutorial materials and community Discord servers for the mods featured below. Of course, you could always check out the official RPS Discord for like-minded appreciators of boardgamery and Endless Bears. 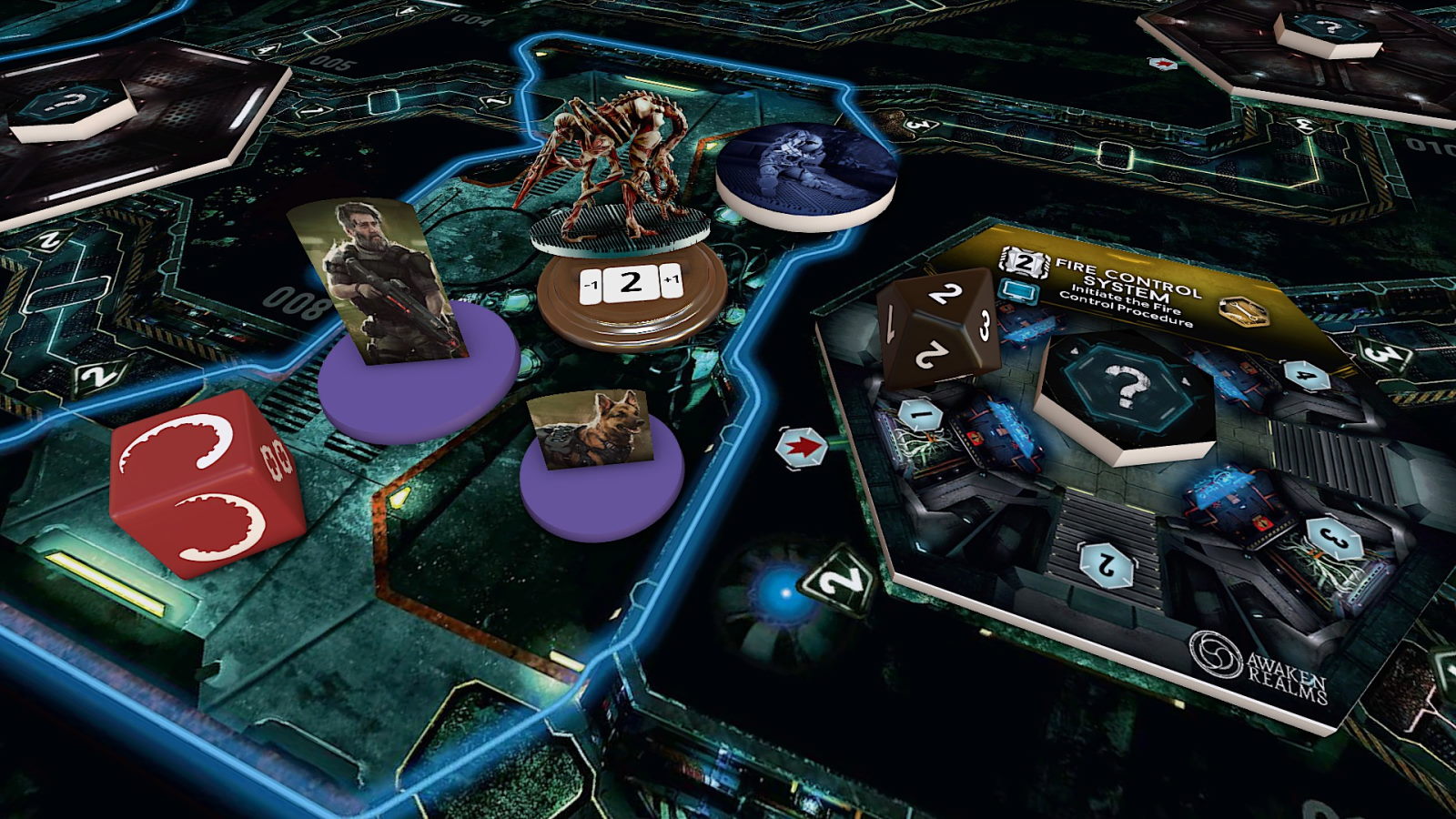 In space, no one can hear you scream at the player that betrayed the entire team. Developed by a large crew (see the Workshop page for credits), this one is a straight adaptation of Nemesis, a semi-co-op game by Awaken Realms about completing nigh-suicidal missions on a spaceship overrun with cliche alien horrors. This version includes the base game, the Aftermath expansion and two additional sets of aliens. If you tire of fighting NotXenomorphs, you can fight NotNecromorphs (from NotDead Space) or psychic NotCthulhoid nasties, each with their own rules.

What makes this mod comparable (and maybe even preferable to) the physical game is that it automates the entire game setup process. You just select how many players you want, what play-mode  (co-op, solo or the default semi-competitive modes are all supported), which expansions you want to use and the aliens you want to fight. Then you hit the start button and it does all the fiddly bits for you. Decks are shuffled, hidden rooms are placed and randomised, and players get doled out their starting equipment straight after picking a character.

It's still a complex game so you'll want to check out the official tutorial video here (a hefty fifty minutes), but this digital version makes it vastly quicker and easier to just jump into a game. Once play begins, you'll have to manually resolve turns and can't rely so much on automation, but there're still a couple of mod-cons. I especially like how they've adapted the infection mechanic. On the tabletop, you placed a card with red squiggles on it under the cellophane 'scanner' to read it. In this version, you place your card on a scripted scanning device and wait an agonising few seconds for it to deliver your verdict.

No official soundtrack and using virtual cardboard pieces instead of full 3D miniatures does rob this of some atmosphere. It's also possible for a less-than-honourable player to anonymously peek under the tiles that players aren't meant to -- but that's more of an issue with Tabletop Sim itself. Just play with people who aren't jerks. On that note, the Awaken Games Tabletop Sim Discord is jam-packed with people eager to play. 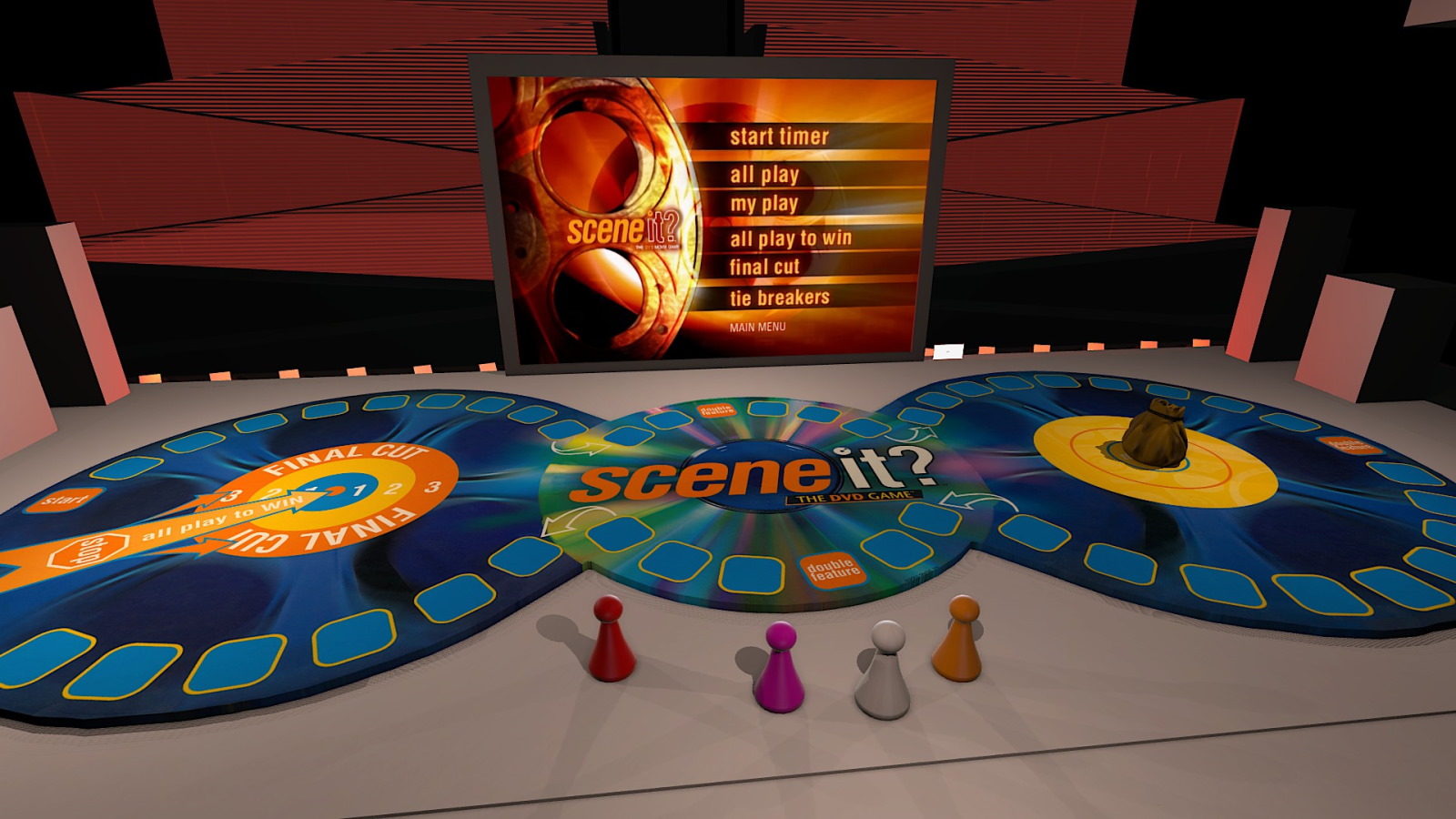 Currently just a proof-of-concept demo, but an exciting one. This one's a port of a relatively simple movie trivia quiz that normally runs off a DVD via yer TV. I'm not sure exactly what sorcery the amusingly monickered "Skeeveotron 3000" pulled to make this work, but you can just click options on the massive TV like it was a big ol' touchscreen, and everything (that's currently implemented) just functions. Better yet, the lighting of the entire stage changes based on the image displayed on the screen, making it far more dramatic than any coffee table.

You can't really play a proper round of the game yet thanks to only some of the content being in place right now, but if they can pull this off, then similarly fancified ports of other DVD or VHS-based games can't be far behind. The only real issue with this is that rather than stream the video live via the tablet-screen features, it seems to download everything in advance and render in real-time. Expect your first few minutes with this one to be spent just waiting on it all to download. 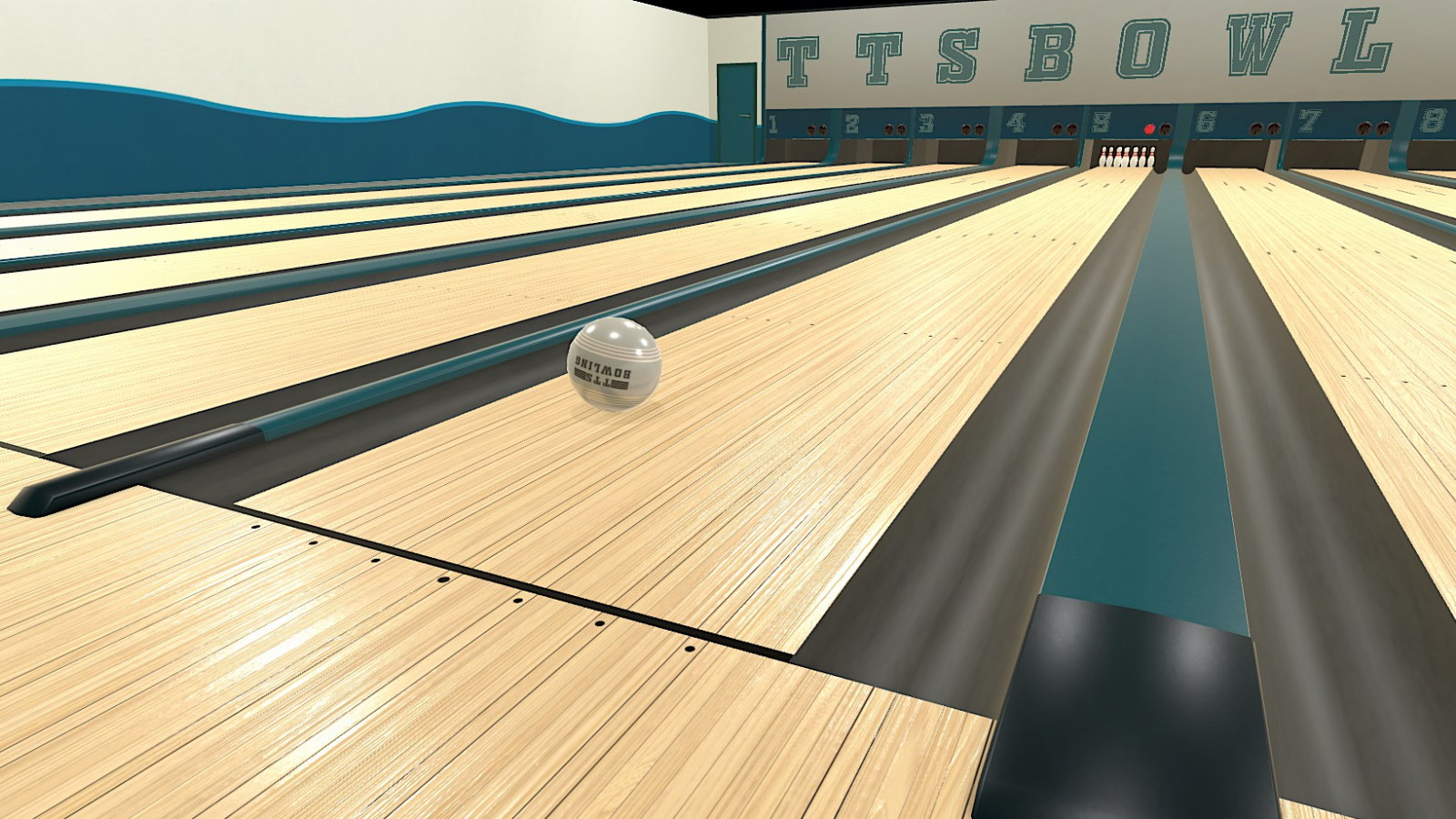 Who needs tables when you've got physics? While these two, both by "Psyrek", are unikely to replace any bespoke PC ball games, they're cute distractions and a neat way for a group to while away a few minutes while waiting for more members to arrive. They're a nice example of how you can import physical geometry into TTS, too. While the mini-golf game is entirely physics based and manually scored, TTS Bowling is heavily scripted and surprisingly close to a proper bowling game. It's one of the most popular attractions for Tabletop Sim newbies right now, and it's easy to see why.

So comprehensive is the scripting here that scoring is entirely automated, and up to ten players can play on multiple lanes at once. While it's possible to catapult your ball far faster than is reasonable, you can also add spin to it by moving your mouse after you take your shot - a feat I hadn't thought possible. It even shows off what you can do with animation and physics by having the mechanical pin setter do its thing, rather than just spawn fresh pins into place each set. Proof that with some time and effort, Tabletop Sim's tools are remarkably powerful.


I had a (very) small part in the tutorial video for Dangan Werewolf - I played as the unfortunate soul first to die. But even with my huge and obvious bias, I really cannot sing enough praises for this project by "Pullahoko" and team. It's a vastly expanded and localised adaptation of a Japanese-only card-based parlour game; a Werewolf-alike based on the excellent Dangan Ronpa murder-mystery series. Up to ten players (plus a GM) try to sleuth out who is the secret murderer - unless you're one of their accomplices.

Unlike Chunsoft's batty teen murderfests, the game doesn't end if the killer gets away with just one crime. Rather, they have to rack up several kills (and frame innocents for their crimes) to celebrate a win, but otherwise it feels more like a Dangan Ronpa game than you'd think. Every playable character has a unique quirk and special abilities that fit their personality, and there are tons of unusual items doled out at random that can completely turn a game on its head, spread misinformation or just cause chaos. There's also a lot of synergy between some characters, so it's hard not to want to roleplay a bit if you're familiar with the source material.

Players find themselves standing in a fully modelled version of the class courtroom from the games. There's even a vending machine filled with toys and figurines to goof off with, and oodles of extra bonus card sets to use if the regular characters don't set your world on fire.

While knowledge of the Dangan Ronpa series is highly recommended, anyone can jump into the game, and there are cards in multiple languages if English isn't your first pick. Check out the Dangan Werewolf TTS Discord channel if you're looking for a group to play with. The more the murderier. If you're itching for something a little more structured, you might also want to check out Dangan Field Trip. Produced by some of the talent behind Werewolf, it's inspired by Dangan Ronpa V3's Ultimate Talent Development Plan board mini-game, but with a few ideas of its own.

A pair of PC gems adapted into tabletop form, then brought back into the digital realm by TTS fans. Both of these adaptations are heavily scripted, doing a lot of the heavy lifting setup-wise. The Portal playroom (by "Cluny") is especially clever, with a cardboard GLaDOS  doing her part and physically picking up and rearranging the test chambers at the end of each turn. I also like the properly fiery incinerator pit, which will burn player miniatures and cake, while harmlessly ejecting the companion cube back onto the board. Also credit due to the warning that players may "bumbletoss scripting through horseplay, skylarking or gamboling frivolity."

Similarly, the Binding Of Isaac adaptation assembled by "Morty Mort" includes a semi-scripted version of the dungeon crawling card game along with some aesthetic perks (like an automated soundtrack) and a bundle of optional, unofficial expansions. Want to throw monsters from Undertale, Nuclear Throne and Darkest Dungeon into the mix? Go wild - it's not like it could make Isaac much weirder, all things considered.

Tthe Tabletop Sim scene is always changing. Compared to the mods I took a peek at five years ago, this collection is streets ahead in terms of visuals, accessibility and automated features. While still not quite as good as sitting around a table with friends and snacks, this is slowly evolving into the next best thing, especially if you have the hardware to try out the surprisingly nifty VR mode. Still, if you want to play tabletop RPGs, you're probably best off just using Roll20 instead.