So you've made it to the Wildspire Wastes in Monster Hunter: World, and your first mission drastically changes tempo from an escort mission to a hunt of this hard-headed brute of a monster. The Barroth is full of nasty surprises, hard-hitting attacks, and a rather unique status condition that it can inflict on you. While not particularly tough, it can be a bit more nimble than anything you've faced in the Ancient Forest far. This guide will go over its weaknesses, how mud can change things up, and ultimately how to kill it.

This foreboding foe from the Wildspire Waste has a rather hard noggin that it uses as a battering ram, but it also has some sneaky tricks it can pull off to make fighting it a somewhat tricky prospect at times. New players should take a look at our Monster Hunter World guide for tips on combat and what to take out on a hunt. 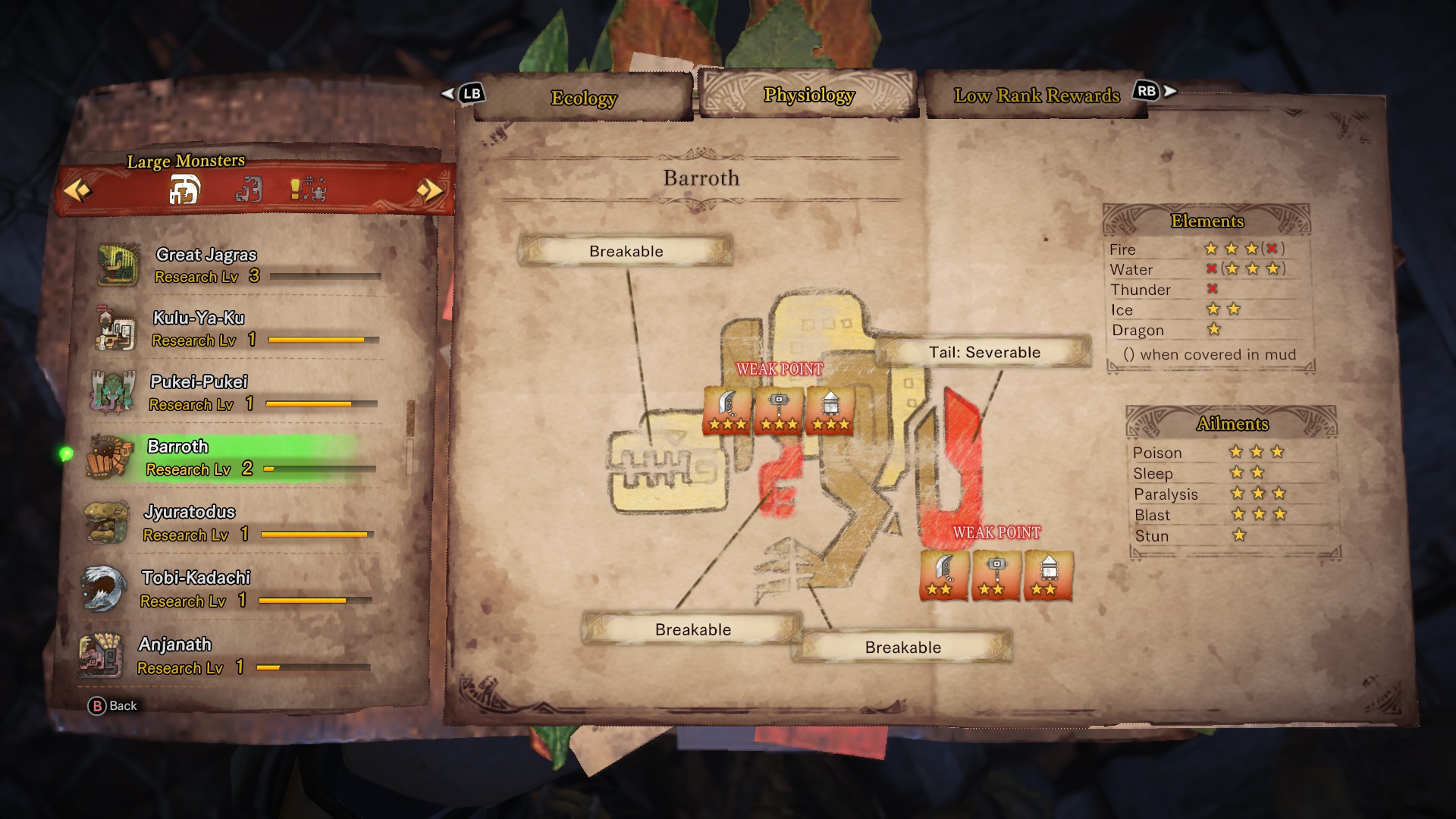 Unlike most creatures in Monster Hunter: World, the Barroth can change its weakness mid-battle. It begins with a weakness to fire and a resistance to water, but once it covers itself with mud these two elements are reversed, meaning it becomes resistant to fire and weak to water. In addition to this, it is always resistant to thunder and mildly weak to ice.

Thankfully the mud doesn't affect its status ailment resistances, making them far simpler to comprehend. It's particularly vulnerable to poison, paralysis, and blast, while having a bit more resistance to sleep in comparison. Don't try to stun it though as it has only one star susceptibility here.

Things get a little more interesting still when it comes to its weak points and what is breakable. While it is possible to break its head and hind legs, the weakest, breakable point is actually its forearms. You can also get a decent amount of damage in on the tail, as well as be able to severe it for more materials. Attacking from a distance is somewhat safer, particularly in giving more time to dodge its most powerful attack, but there's no bad choice for weapon types here. 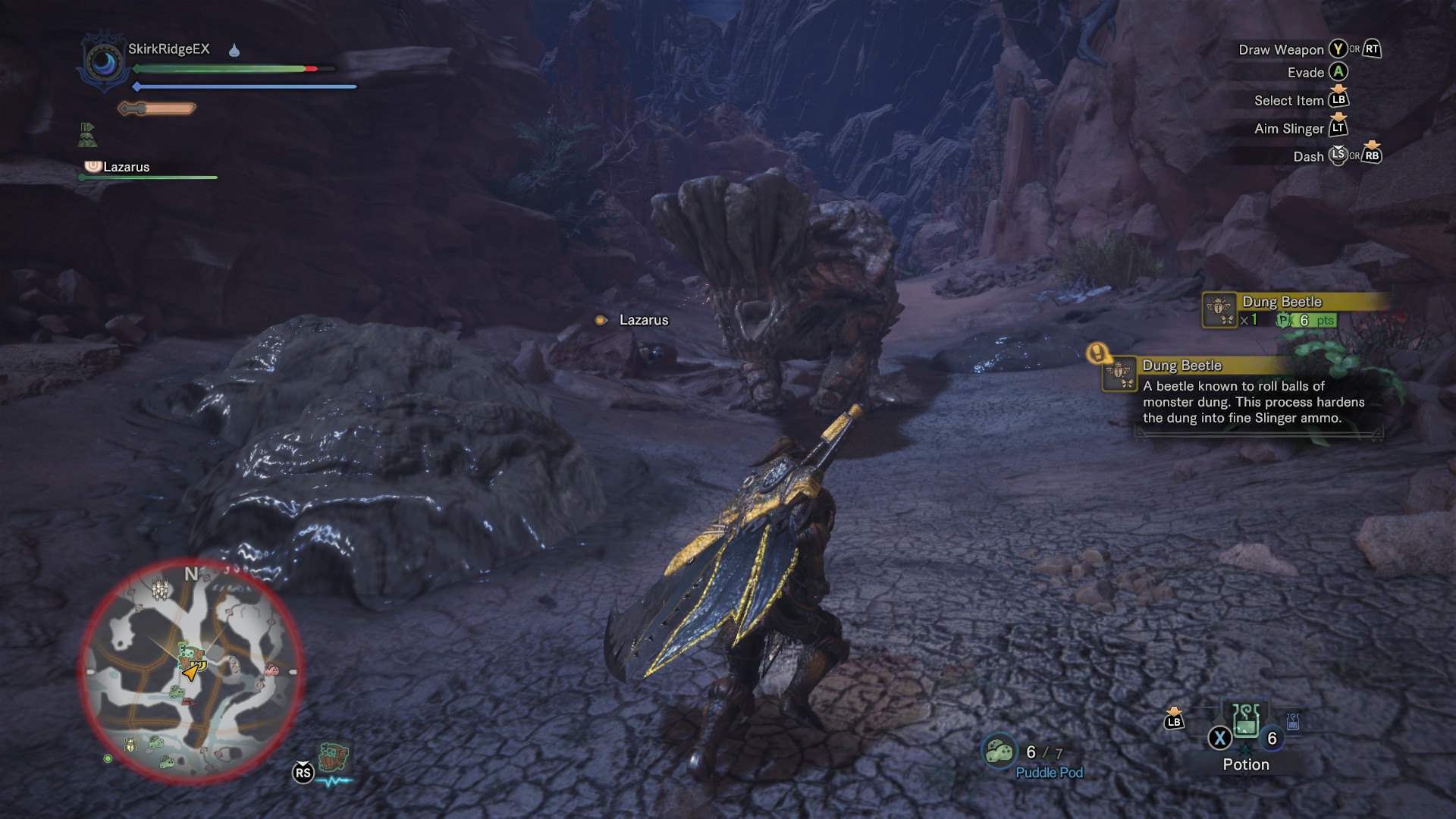 How to fight the Barroth

Barroth is a highly aggressive beast that charges frequently. It's likely to be your first real test of skill as a monster hunter if you don't know how to avoid its attacks. If you hear what sounds like steam venting like a train, it's about to charge in a straight line. This does leave it somewhat vulnerable to being attacked from behind for a few cheeky hits, especially if it hits some destructible terrain.

The main thing the Barroth can do that is a pain to deal with is drop mud around the field. If you somehow get caught up in it, you'll be inflicted with a status condition called "Waterblight". This reduces your stamina recovery speed, turning the bar blue, until it either wears off or you consume a Nulberry, so be sure to take a few of these into the fight.

Also keep an eye out for Rathian as it has a nasty habit of joining in the battle and making things doubly difficult. The two will fight fiercely and Rathian can spit fireballs, so be sure you're not in the blast radius, particularly if you're not prepared to fight this new challenger. Should you wish for Rathian to depart from the area, bring a few dung pods and fire them at its face. It should then retreat and allow you to continue your fight against the Barroth.

Aside from that, Barroth has a fair few melee attacks, including a rather nasty tail swipe and a headbutt. You can chop off the tail in order to reduce the tail swipe's range a little bit. However the main thing is to listen out for that sound cue, so as long as you do that, you shouldn't have too many issues. Heavy hitting weapons like hammers and great swords can work well here by breaking parts of its armour off, so consider using them to take it down.

What materials can I get from the Barroth?