As one of the nastier fights in Monster Hunter: World, Nergigante can prove somewhat bothersome thanks to several key factors. Its spikes double as armour and projectiles at a whim, and it has at least two attacks that can outright kill a hunter if they don't dodge them. Naturally given that this re-occuring monster has been hindering your progress with Zorah Magdaros, you'll want to kill it once and for all. This guide will go through each attack that Nergigante can pull off, as well as tell you how to kill it and what its weaknesses are. 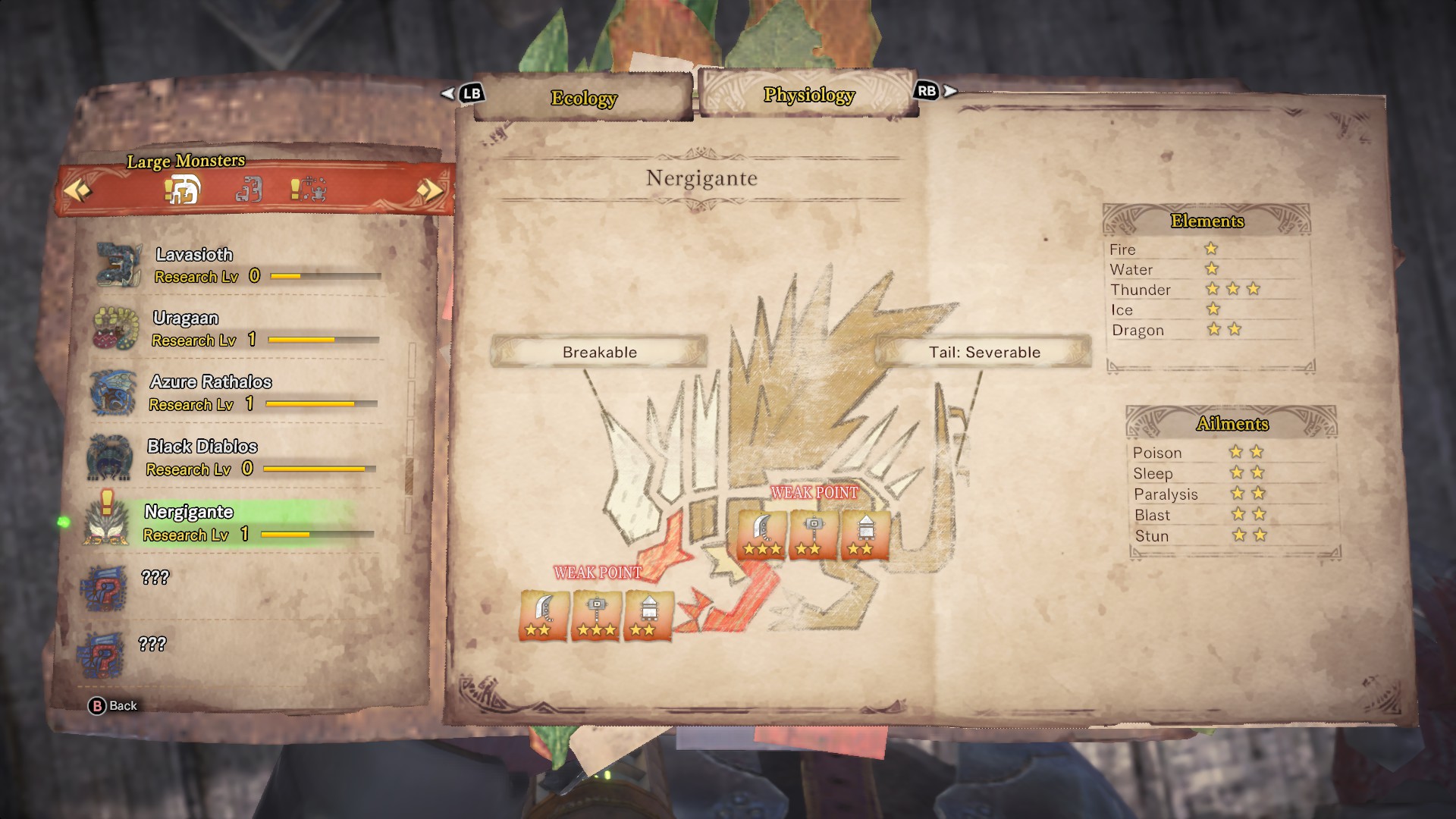 When it comes to weapon choice, thunder weapons are the way to go with this fight. Dragon can be good if you have a decent weapon on hand, but really that's the only reason not to bring a thunder-based weapon to this fight. Defensively you should focus on high-defence stat armour, as Nergigante doesn't really do any elemental damage. It's also equally susceptible to all the ailments, though you should definitely bring flash pods with you to this fight.

Nergigante's perhaps tougher than any other monster you've faced thus far, with its weak points being its front set of claws and its mouth. Melee weapons do more damage, though blunt weapons hit the jaw harder and bladed weapons deal more damage to its claws respectively. Ranged weapons do the same set of damage to both its weak points. Inconveniently, the breakable parts are its horns and tail, which upon breaking do limit its attacks a little bit. 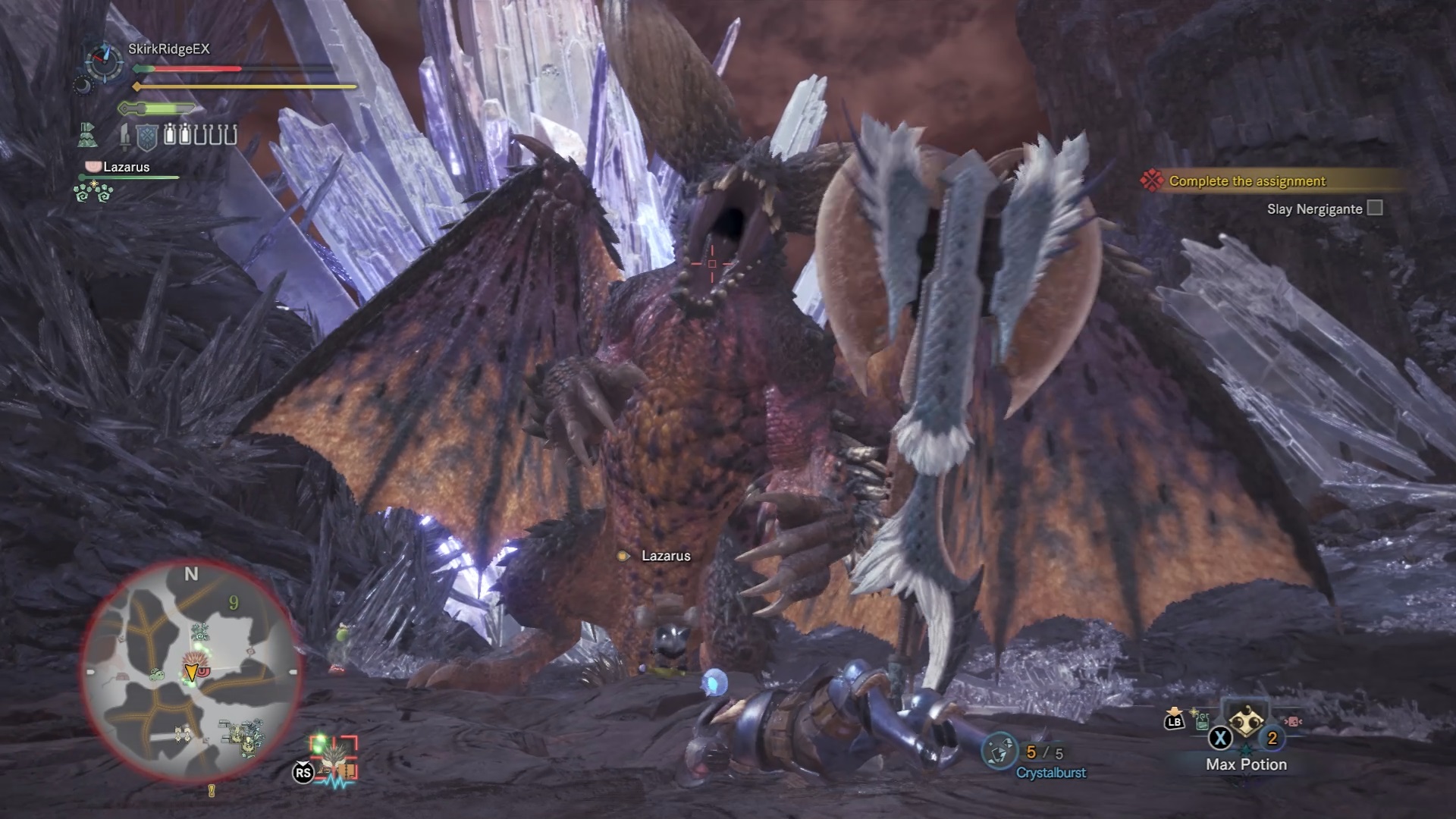 How to kill Nergigante

Firstly, before preparing to fight this Elder Dragon, you can't capture it. Put away those Tranq Bombs as you won't need them. Instead, opt to take explosives like Large Barrel Bombs or Mega Barrel Bombs for the late stage of the fight. All available healing and health/stamina boosting items are also a must as this monster hits like a truck.

More so than any other fight, don't get greedy when attacking Nergigante. Its attacks have a small windup time and have the potential for devastating followup moves that can kill you outright. A common tactic is for Nergigante to swipe with its claws, knocking you prone and staggering you while it prepares to pounce on you. Normal dodging won't work when this happens as it will hit you, however the demon mode variant accessible to dual blade users can get out of the way of this attack. Shields can also negate some of the damage, but you will likely need to heal back up sharpish.

It's not just its claws you need to watch out for though. Other than the standard bites and tail swipes, another big attack to watch out for when up close is when it leans in on one side with its wings. It will then proceed to charge in that direction, before sharply rising and potentially scattering some spikes. Ensure you're as far to the side as you can at the first sign of this attack happening, which is when it rises up on one side. There is also a variant on the slam attack where it will rise up afterwards and can scatter spikes, so try not to be in the immediate vicinity when this happens.

Those attacking from further away will also need to worry about the huge leaps that Nergigante can do. While the initial jump's damage is somewhat minimal, it's getting into position to charge for real, and that does a lot more damage. The trick with dodging this one is to head sideways and leap at the moment it charges to avoid it.

You may not have noticed this in the heat of the battle, but Nergigante has got a rather annoying trick up its sleeve to do with its spikes. When they are bright in colour, they're in the middle of growing and the fleshy bit underneath is still vulnerable to damage. However, as soon as they turn black, the spines get an armour plating, making hitting the weak spots a bit more challenging. It also augments some of its attacks with ranged capabilities.

Aside from just simply dodging certain attacks, there is another way to remove them. Whenever it drops Dragon Pod slinger ammunition, pick it up and begin unloading the pellets onto Nergigante. This will stagger it, but also break off any spikes on it, forcing it to regrow them and making Nergigante vulnerable once more. 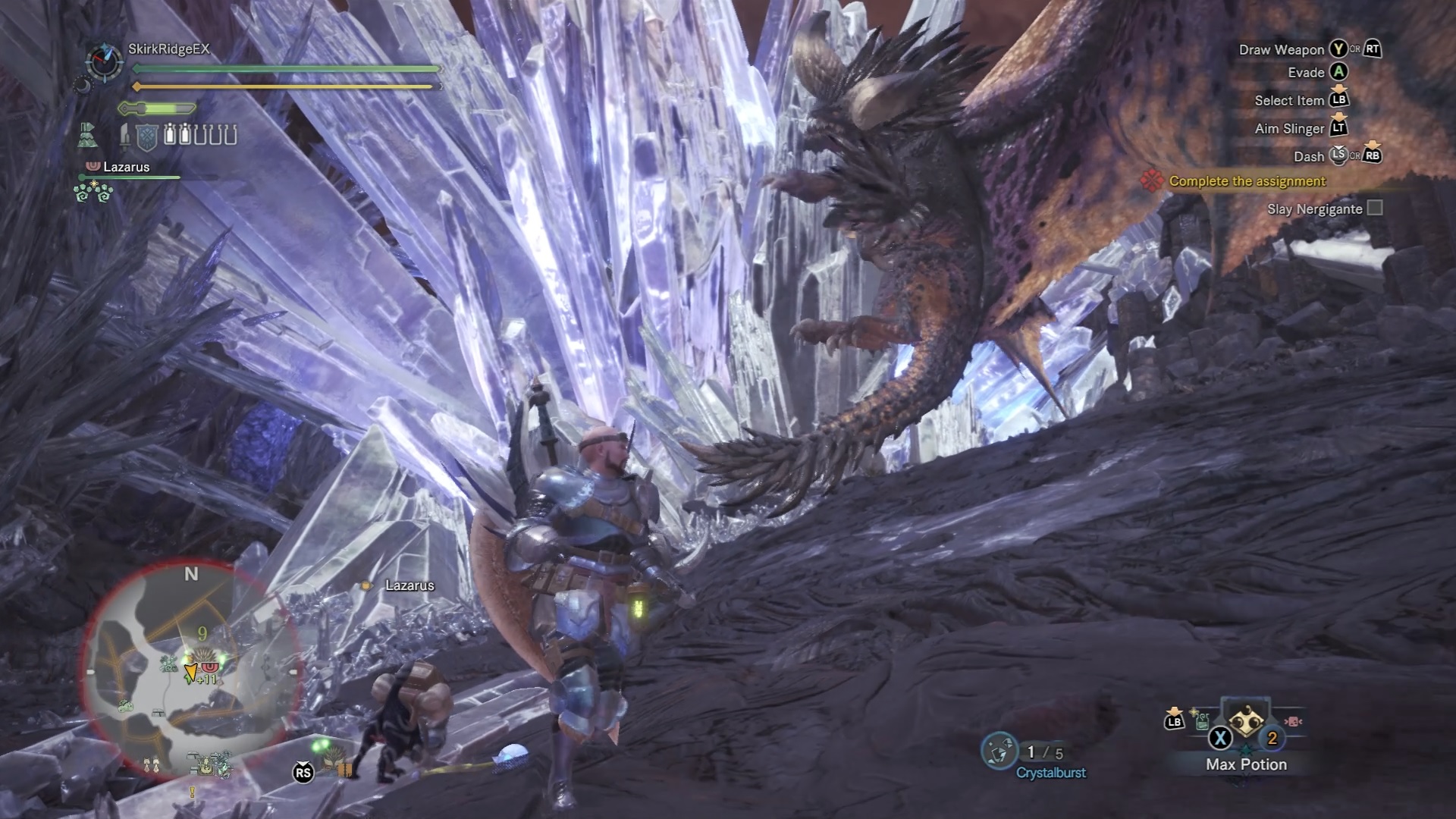 This deserves its own section as it's by far the most lethal attack that it can pull off. It has a couple of tells that require you to be observant of its spines as they grow during the fight, as well as a particular audio cue of it screaming. You'll definitely know when that is if you're stunned by it. It will then launch itself into the air and dive bomb, scattering its spines in the process. This attack has a huge area of effect, so avoiding being damaged is difficult. A head on collision will kill you outright.

Firstly, if you have any flash pods, fire them so that it can see flash mid-air. It will send it crashing down, leaving it open to big hits, break the spikes it has formed, and even leave it vulnerable to a barrel bomb detonation if you're lucky. Should you have run out of flash pods though, you'll need to dodge. If the scream doesn't stun you, put your weapon away and run sideways. As soon as its body twists, it's going to dive, so perform a dive yourself, making sure you land on the ground so that the spikes sail overhead.

If you are stunned, try to run sideways if you can, but the timing for the dive just got harder. After this attack, Nergigante will be vulnerable, so if you're close enough to score a few hits in or have ranged weapons equipped, now's your chance to unload attacks into it.

What materials can I get from Nergigante?

That's it for our strategies for Nergigante, but there's still a few more Elder Dragons to slay, not to mention the numerous post-Zorah Magdaros large monsters that are also now roaming around. Those who want a refresher on the previous monster should check out our Monster Hunter: World Pink Rathian guide. We'll cover the optional monsters first as there's a fair few good materials that should put you in good stead for the upcoming Elder Dragon fights. We'll begin with the monsters in the Elder's Recess, so check out our Monster Hunter: World Uragaan guide for how to deal with this explosive character.