Forty five minutes with Monster Hunter World [official site] was enough to convince me that people who bang on about the series might have a point. I killed two big beasties in that time, cooked a couple of delicious meals, and fell comfortably into the flow of stalking and stabbing.

If you think, even for a moment, that I'm being derogatory in any way when I use the phrase “for kids”, get rid of that notion right now. I'm all for The Witcher 3's particular brand of grim-sexy fantasy but I'm just as happy to spend time in a big colourful world, chomping comically oversized bowls of stew and hanging out with a little feline pal in between monster hunting sessions.

This is, Capcom assure me, Monster Hunter 6 in all but name. It's not a spin-off, it's not a diversion, it's a full-blown sequel with all the features a fan of the series would expect. All the weapons, all of the combat, all of the collecting and crafting. The World part of the title refers to the nature of the game world, which while not quite what we might think of as open world, is more of a continuous environment than has been the case in previous Monster Hunters.

For the purpose of the demo I played, I couldn't even tell you how large the areas I explored were because once the actual hunt began, I was so focused on my prey that I didn't pay much attention to the map at all. Given that the first part of every hunt involves finding tracks or smells or big globs of mucus I expected to keep my eyes on the minimap rather than the world, and that'd be a shame because it's a very lovely world indeed. 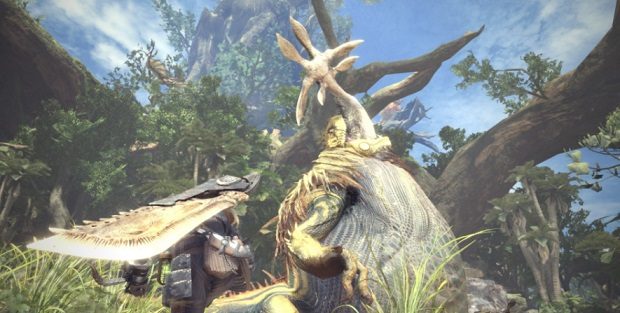 Thankfully, the tracking system is simple enough. You follow glowing lights from one trace to the next. There's no real need to pay attention to the details of the forests and rivers because you are essentially guided through the process but you do have to clamber and swim and explore. Movement is smooth and simple, and getting from one place to the next is usually just a case of pointing your character in the right direction and setting off. There's no jump button, so you'll make your way up ledges and across small gaps automatically, and while that takes away some fine control, it does mean that your character fits into the world snugly, comfortably feeling one with the environment.

That's important because when an actual fight and chase begins, you're going to get thrown around caves and over the edge of cliffs. You're going to skid and slide, and dive and roll, and it's vital that everything feels solid. The collision detection isn't perfect, particularly when it comes to the monsters shuddering into the ground or against a wall when they've taken heavy damage, but in the thick of battle, any clipping issues are barely noticeable. Both encounters I had were a spectacle of frantic fur and flesh. 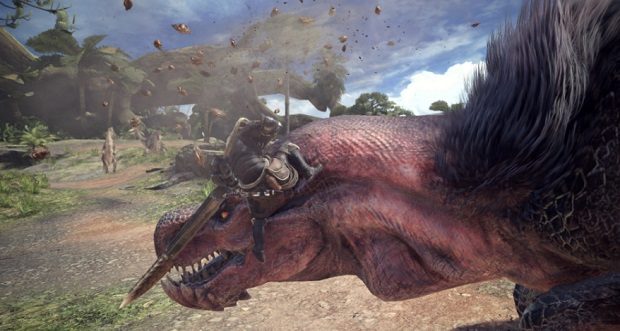 The weird thing is, though the game is bloodless, I did find it slightly upsetting. Silly, I know, but one of those monsters had kids, a whole litter of them. They squawked and snapped at me when I burst into their den, chasing their mum and thwacking a massive hammer against her shins. She had fought back for a while but I'd been chasing her for a while when she finally made her way back to the den. I can't remember the name of the species, but it seemed like a pleasant enough creature, dragging its big ol' belly full of food around. When I'd spent a while slamming its legs from under it and occasionally using its skull as a makeshift gong, the belly deflated and I was suddenly facing a very angry, very lean monster rather than a chubby beast of burden (the burden being that massive belly).

You can tell when monsters are angry because they roar and bits of their body go rigid, standing to attention. Like the neck frill on that one acid-spitting, Nedry-killing dino in Jurassic Park. Fighting the second creature in the demo, which put up much more of a challenge, there was a moment when the hunter (me) became the prey. The giant thunder-lizard-baster got so angry with my little gnat-like stabs and scratches that it decided to destroy everything in the vicinity, like a furious man smashing his own living room to pieces as he tries to swat a fly.

You can get an idea of how it plays in the video below.

The whole fight was amazing, veering from slapstick to spectacular action as the chase took us up cliffsides and down into valleys, then through caves and back out into the open, where I got thrown into a lake. My little cat buddy paddled around in a miniature inflatable raft as I was repeatedly dunked by the monster's tail. Thanks for the assist, Felix.

At one point we charged into the path of one of the big-bellied brutes I'd slaughtered earlier, and suddenly I was in a three-way scrap. It all went a bit King Kong, with one monster grabbing the other in its jaws and then slamming it into the ground. I swear I saw one dinosaur suplexing another dinosaur. Then they both decided to turn on me for a while, before savaging each other again until the smaller of the two fled with its tail between its legs. 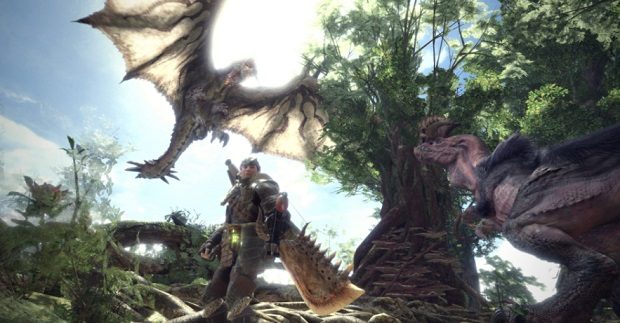 Despite the physicality of the combat, it's often very cute and approachable, with that paddling cat and the merry simplicity of the camping sequences, where you craft new gear from the parts of your fallen foes and make meals to buff you for your next outing. But the actual fights are intimidating in their length, demanding endurance and concentration, and there's a whole lot to see and do. And let's not forget that you're making armour and weapons out of the corpses of the things you hunt. It might be bloodless, but it's an icky business, this monster hunting.

It's the combination of accessibility and density that keeps people coming back to the series, I think, and after a little taste, I'm all-in for this child-friendly wild hunt. The clashes between monsters and sense of a living ecosystem are the icing on an already delicious combat-cake. The PC version will be out after the console release, which is set for the first quarter of next year, and we'll let you know as soon as we have a better idea of when that might be.