As one of the "not quite re-skins" found in Monster Hunter: World, Uragaan is essentially an Radobaan that can make things around it explode. This optional monster can be totally ignored should you so wish, but hunting it can give you some half-decent armour to make some upcoming fights a little easier, as well as net you some materials only found by mining its body. This guide will go through the Uragaan's attacks, as well as tell you how to kill it and what its weaknesses are.

Since these monsters can be relatively explosive from now on, it's imperative that you have agile reflexes for dodging its bigger attacks. While nowhere near as bad as the previous fight, you can still look at our Monster Hunter World guide to get some general tips for what to do when preparing your gear, as well as a plethora of other articles with full equipment lists for your perusal. 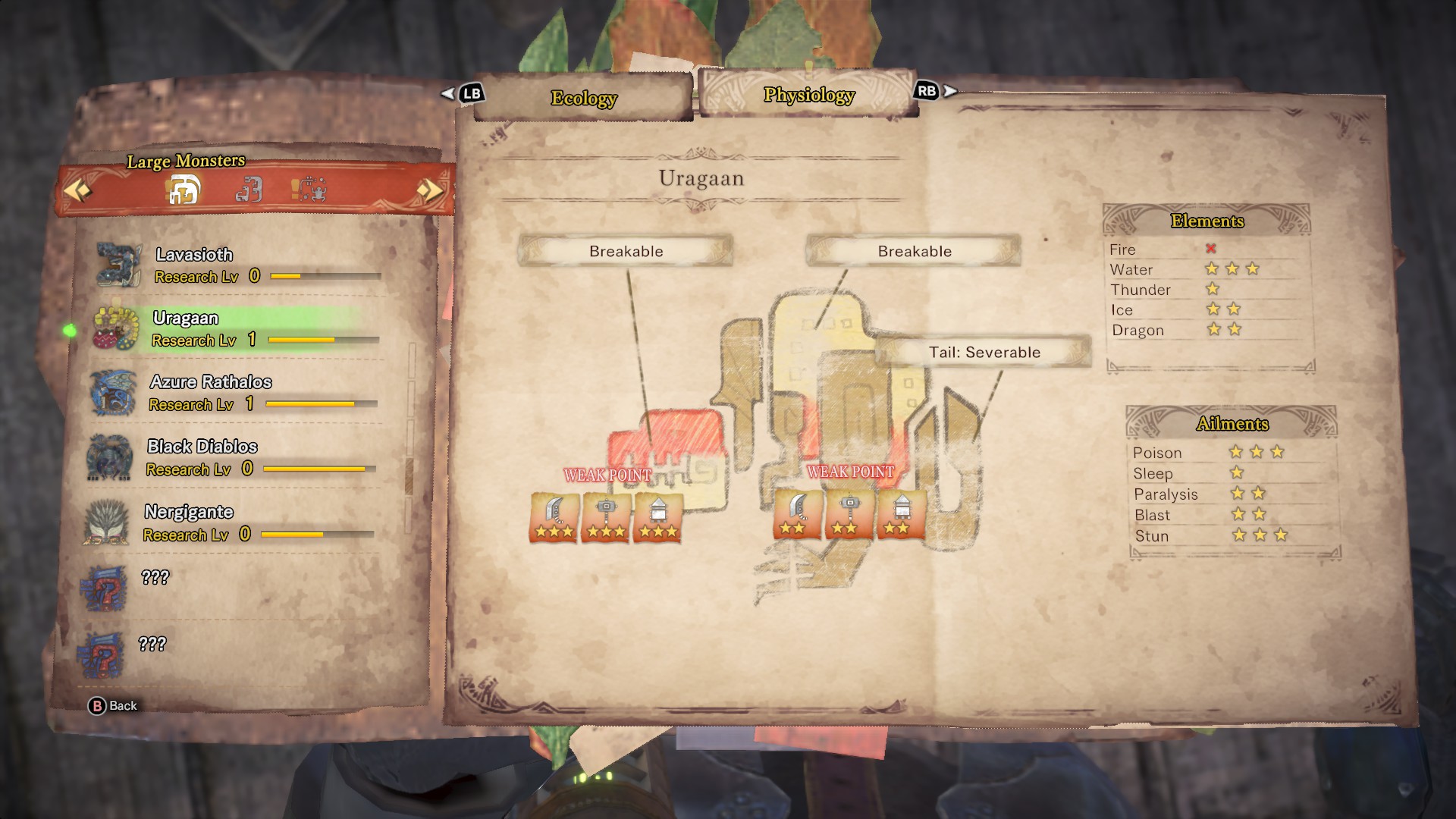 Uragaan is naturally resistant to fire and weak to water, so bring your water based weapon to this fight. Ice and dragon can be good if a water weapon isn't available to hand, but thunder is almost as bad as fire.

Status ailments are a different story, with the Uragaan being very weak to poison and stun effects. Surprisingly, despite having predominantly blast-like attacks, using blast on it can be somewhat effective; the same goes for paralysis based attacks. Don't try to put it to sleep though, as it won't have much affect.

Breakable parts include the top of its head, its back, and the severable tail. With its head, though it is definitely a weak point eventually, it initially will make weapons bounce off of it. This is because you're likely hitting its jaw, so ensure you're hitting the top of its head when its downed and hitting its belly when it's upright. You should use weapons that you're comfortable with, though there is an advantage to using certain weapons - ranged weapons or the Dual Blades seem to work the best. 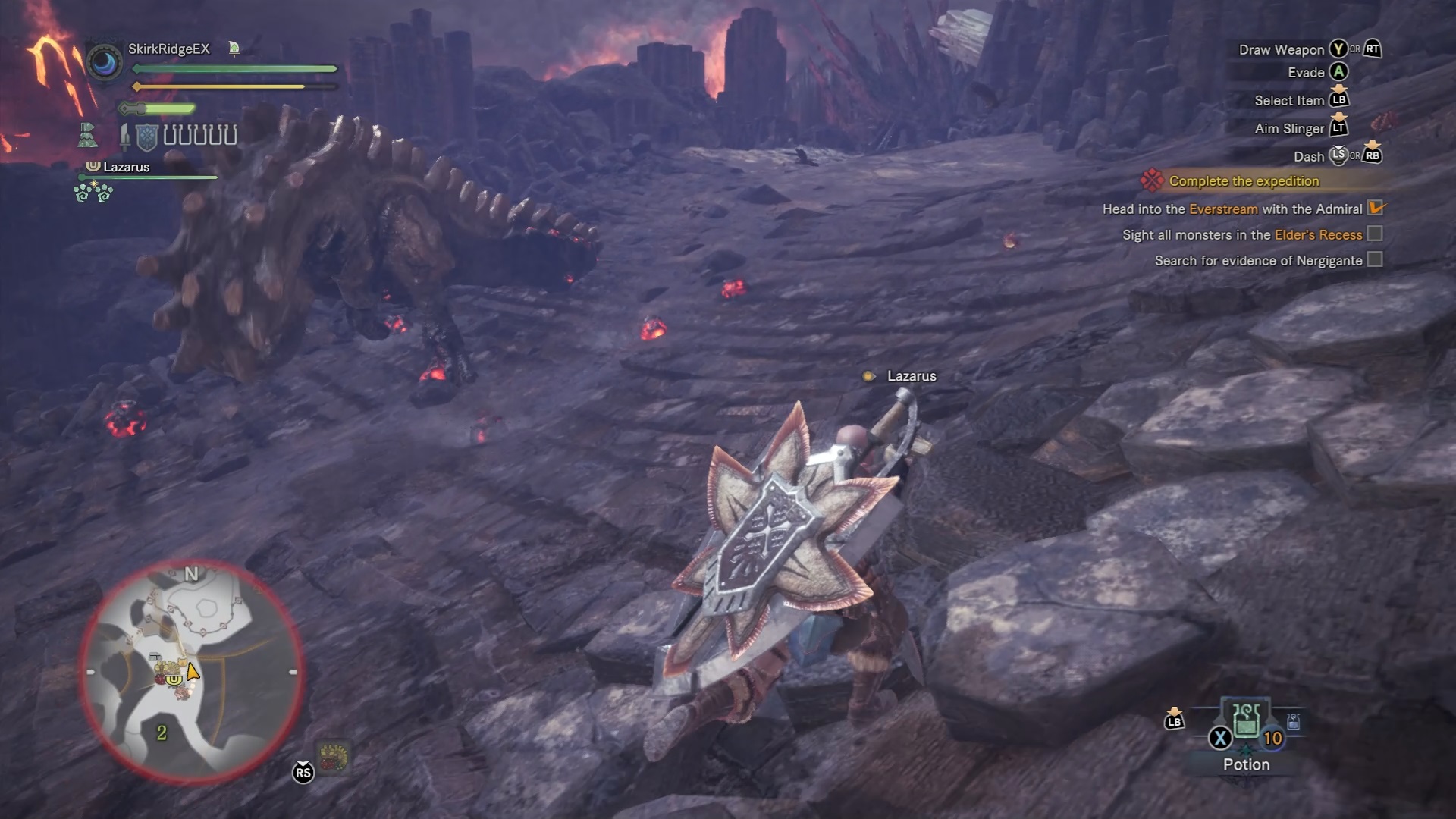 How to fight the Uragaan

Remarkably similar to Radobaan, Uragaan likes to roll around and be a general nuisance, only its explosives are the most troubling thing about it. When it rolls around, it scatters red balls that if hit by either you or the Uragaan will explode. The general idea is to take them out from afar, which while it won't affect the Uragaan will make it at least a little on the safer side for you to attack it.

Its most devastating attack is its jaw slam. Normally this is done after it roars, so to counter this a little, never attack it from the front. Since you won't have a good angle to hit its head, it's generally better to go and attack its side instead. This attack can send a shockwave which will detonate any deployed mines, so be sure you're not in the blast radius. Another odd attack it can do starts when it shakes. If you see this, run away, as it's prepared to eject some steam that can inflict either fireblight or sleep on anything in its range. Of course you can avoid this entirely by fighting with ranged weapons.

Knocking this creature down presents you with a bit of a conundrum. Should you attack its head, or do you risk mining the special ore in its belly for materials? This isn't the same as a general reward for breaking parts of this creature, or indeed severing its tail, so if you want to get the most out of the situation it may be best to try and attack the top of its head instead. If you want the ore over the kill/capture though, go ahead and mine those spots.

One thing you should be mindful of is that at this stage of the game, wandering monsters will always fight each other. Uragaan tends to come off the bad end of any fight it can have, so just keep out of the way and watch the chaos ensure. Just be aware that if the likes of Dodogama or Bazelgeuse come for a scrap, you'll want to be as far away from the fire as possible. Items will be dropped too, so make sure you nab them if you get the chance.

What materials can I get from Uragaan?

That's it for our strategies for Uragaan. There's still a few more Elder Dragons to slay, not to mention the numerous post-Zorah Magdaros large monsters that are also now roaming around. Those who want a refresher on the previous monster should check out our Monster Hunter: World Nergigante guide. We're covering the optional monsters first as there's a fair few good materials that should put you in good stead for the upcoming Elder Dragon fights. Continuing with large monsters found in the Elder's Recess, head to our Monster Hunter: World Dodogama guide for how to deal with yet another volatile beast.