This is it. The final fight of the main campaign of Monster Hunter: World. All that stands before you and total victory is this huge sparkly dragon, born into the world through crystals gained from the Elder Dragons that have died before it. Killing it with friends is ideal, but you may have to jump into this fight solo. This guide will go through this final showdown, detailing what its weaknesses are and how to kill it. 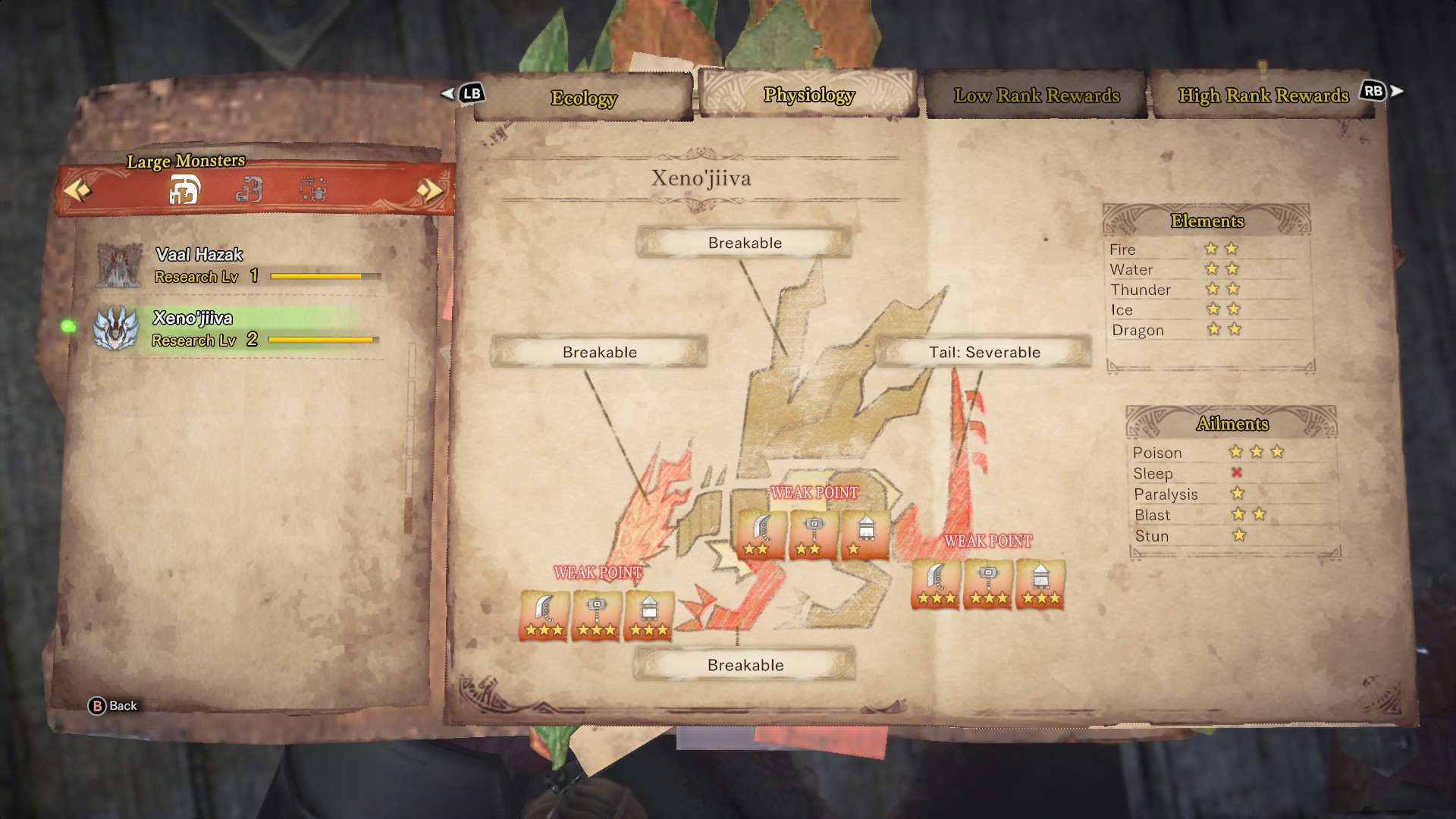 Xeno'jiiva has surprisingly few weaknesses, with all elements being equally good against it. Poison weapons are however perhaps your best bet against it, while wearing any gear orientated to combat dragon moves is ideal. Blast can also be good for dealing bursts of damage at a time, but this dragon cannot be put to sleep.

Breakable parts include the head, front claws, and wings. The tail is also severable and should be chopped off at your earliest convenience as it reduces the effect of some of its attacks. Hitting the legs is a bit of a tricky subject thanks to some weird properties that Xeno'jiiva gets in its second form, so we'll reserve that for the strategies part of the guide. Weapon choices should include melee weapons where possible, though ranged weapons don't need to worry too much about hitting its legs. 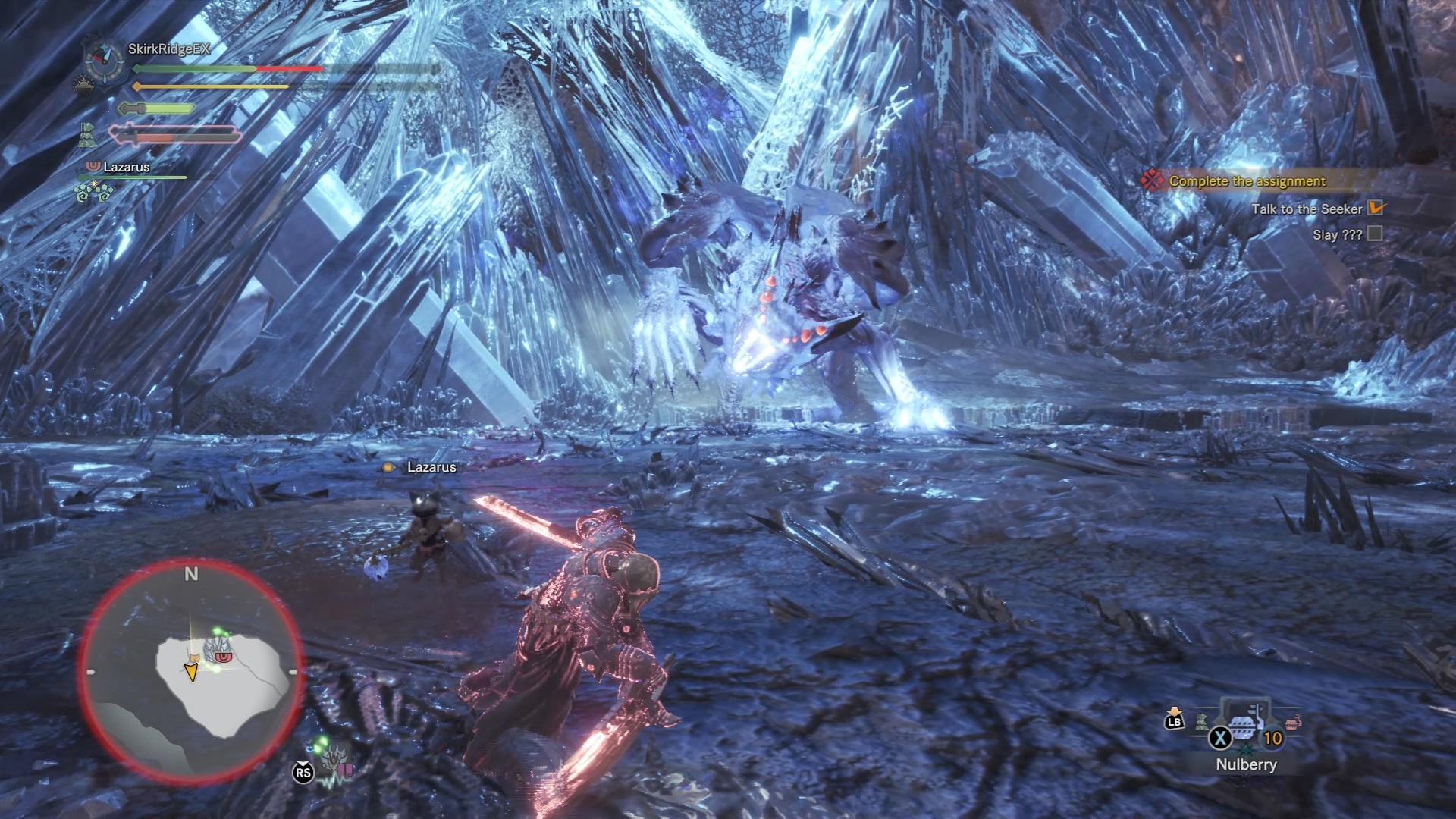 How to fight Xeno'jiiva - phase one

As this is an Elder Dragon, you can't capture it, so no Tranq Bombs should be brought into this fight. Instead bring along all the barrel bombs you can carry, as well as any available healing and health/stamina boosting items. This will be a test of endurance, so stamina recovery will be key in this fight, as well as Nulberries to counter "dragonblight". One other thing to note going in is that this monster cannot be mounted.

This boss has two areas that it inhabits. The first has a small ledge and not a lot else, being quite an open arena. Your main task is to try not to get trampled by Xeno'jiiva while it walks across the battlefield. It has a handful of physical attacks, including a claw swipe that can be dodged by rolling underneath it. Its tail slam can be dodged sideways, while it can also charge at you if you're far away.

It also has several breath attacks. Its fireball can either come in one blast or three blasts. For three blasts it will always shoot forwards, to its left, and to its right at very specific angles, meaning that it's simply a case of standing in the right place to avoid getting hit. It also has a concentrated beam which it will spew straight forward, or from right to left, allowing you to get up close to attack it. Finally there's a tracing beam that moves on a set pattern in a cone close to it, then extending outwards to further afield. All of these attacks leave it very open afterwards.

After enough hits on it, it will become "awakened", meaning that its torso begins to glow a fiery red. Some of its attacks change slightly in this state, such as the projected beam sweeping back the opposite direction, the ground beam retracting and sweeping for a third time up close, and the tail slam exploding the ground afterwards. Beams also create a heated area that can inflict fireblight upon standing on it, so roll three times to get rid of it.

The plus side to this awakened state is that the back legs go from being armoured to being a weak point, meaning you can get decent damage on Xeno'jiiva. This state also presents you with the perfect opportunity to attack them whenever it body slams into the ground. It will then cave in part of the ground, before the area around it explodes. The area of effect of this explosion is smaller than you might anticipate, meaning you can run in and start smacking its hind legs around. After a while, Xeno'jiiva will fly, leaving the arena and forcing you to pursue it. 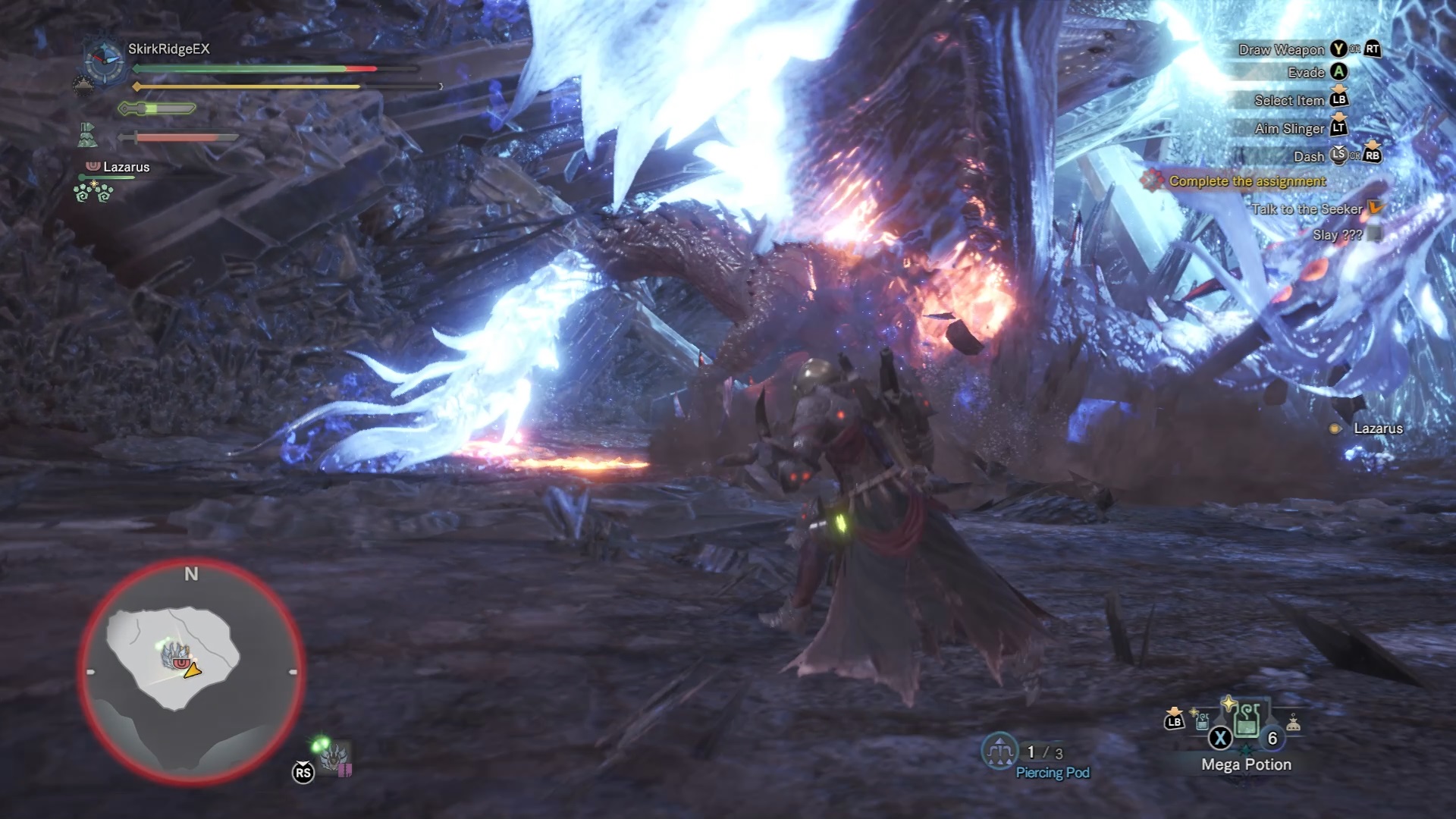 This new map has a lot more cover, though this can easily be demolished by Xeno'jiiva's charging attacks or projectiles. It will begin this phase in its unawakened state, though there are no real differences until it awakens once more, where it keeps the same set of attacks and weak points.

The major difference here is that when it wakes up, it can now take to the skies. Should it take to the air, it gains an additional set of attacks, including a beam that traces from below it in a straight line upwards, as well as a diving claw swipe that can inflict dragonblight. This status condition makes all your attacks non-elemental, meaning that you won't be getting the most effective hits in on it. This is as simple to get rid of as eating a Nulberry, but can be a bit of a pest on top of the other nonsense Xeno'jiiva can do. It also gains access to being able to fire up to six blasts at your known position, which you can just run to avoid.

It's also in this phase that it will begin to shed slinger ammunition that can be used to either inflict lots of damage with careful placement of Piercing pod ammo, or bring it down once it's in the sky. Since Flash Pods do nothing against this creature, Dragon pods are the only way to send it crashing back down to earth, leaving it open for you to get lots of hits on its head. You'll likely need the full 50 minutes if you're taking it on solo, but eventually this big baby will be defeated.

What materials can I get from Xeno'jiiva?