Mordhau's selection of shields is remarkably diverse both in size and in terms of their potential for completely shaking up Mordhau's magnificently elaborate combat system. And now, Patch #7 has released, giving shield-users some added mobility and quality of life tweaks, so it's a good time to get started on learning this side of Mordhau's combat. This Mordhau shields guide is, I think, a necessary addition to our Mordhau series, because not only have I seen many players asking what the point of shields is as they appear far too weak and cumbersome, but I've also heard the outcries of many a player who have come up against a seasoned shield-user and don't know what they could possibly have done to beat them.

This guide will walk you through each type of shield on offer in Mordhau and how they all operate, before moving onto some in-depth tips and techniques both for using shields to the best of your ability, and for countering shield-users and abusers.

One quick mention before we dive into the world of tolerance values, turn caps, and held blocks: if you're looking for more of an overview of this wonderful medieval brawler, then check out our Mordhau guide for explanations and tips on just about everything, alongside links to every other part of our Mordhau guides series, from stats and opinions on all of the Mordhau weapons to my in-depth and advanced Mordhau melee combat guide, and much more. 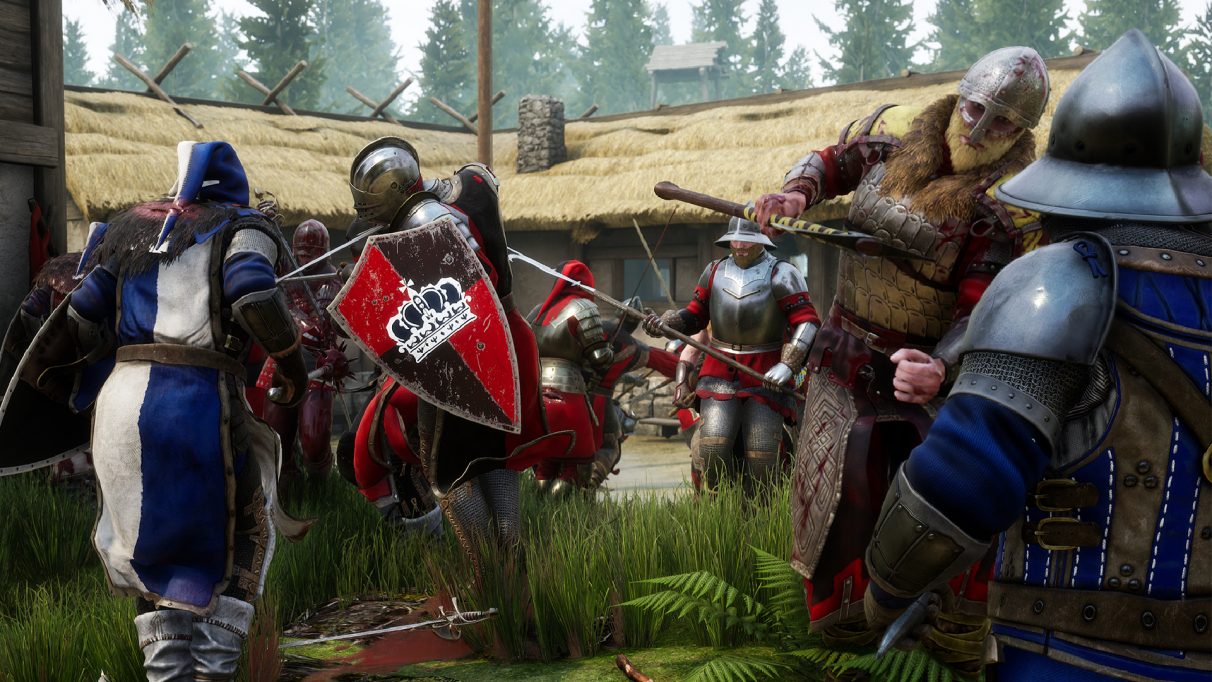 You may think shields are the simplest aspect of Mordhau's combat system, but in reality they're anything but - as you'll soon find out. We've a fair amount to cover here, so feel free to use the links below to skip ahead to a particular section.

Let's start with the obvious question: why use a shield? It's a valid point; they cost extra points to pick up, so you should know exactly what you're getting out of it.

Shields can be equipped in your off-hand while you wield a one-handed weapon, which means you can use any kind of shield (except Pavise) alongside anything from a Dagger up to a Messer or Bastard Sword. There are five different shields currently in Mordhau, which can be broken into two types (and one outlier):

The pros and cons of using a shield differ depending on the type you're talking about, but some traits are universal. For one, they provide larger areas with which to block an attack than any weapon - and they also often feature very forgiving "Block View Tolerances", which means you don't have to be quite so precise with your shield placement to block an attack. Shields are also useful because they can block projectiles and sometimes even melee attacks even when you're not blocking with them - you can carry a large shield on your back and it'll often protect you from enemy archer fire and the like.

Held Block shields also have the massive benefit of - you guessed it - being able to hold your block. We'll go into this in more depth in a moment, but trust me: this completely changes the game, often in favour of the shield user. However, the larger your shield the more of your screen is obscured while you fight, which means you often need a good idea of your opponent's attack animations and positioning in order to maintain awareness of what's going on in a fight while you're blocking. 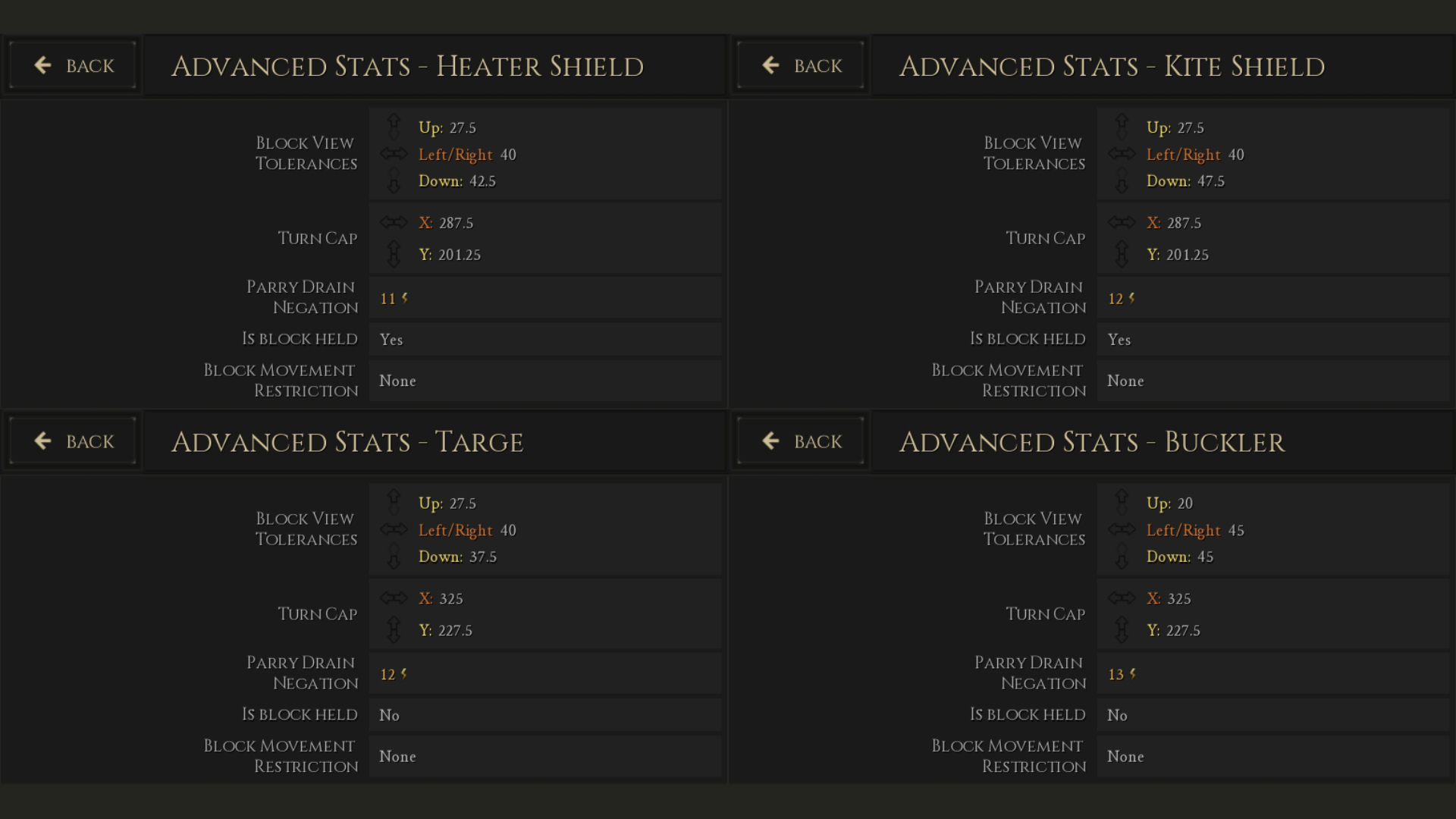 We'll get the Timed Block shields out of the way now, because they don't actually change the game up all that much. The majority of this guide will focus on the Held Block shields and how to use and counter them - but that doesn't mean there isn't a place for the Targe or the Buckler in your character's build.

Both these shields work in more or less exactly the same way, but the Buckler is near-objectively superior to the Targe. The only benefits a Targe has over a Buckler are a lower cost, and a slightly larger area to block with. The Buckler is in fact the smallest shield on offer in Mordhau, but it enjoys several benefits, including a high "Turn Cap", and the best "Parry Drain Negation" of any shield (joint top of any weapon, too).

I should explain what those terms actually mean. "Turn Cap" means how freely you can turn the camera while you're blocking or attacking. All weapons have different Turn Cap values, and the same is true with Shields. The lower a Turn Cap, the more restrictive it is; which is why the Buckler's high Turn Cap is very useful and offsets the disadvantage of its relatively small area.

To understand "Parry Drain Negation", you also have to understand "Stamina Drain". When you block an enemy's attack, you lose a bit of Stamina. The amount of Stamina you lose is equal to the attacker's "Stamina Drain", minus your weapon's (or shield's) "Parry Drain Negation". For example, if you block a Zweihander's attack with your Dagger, you'll lose 20-6=14 Stamina (quite a lot), whereas if you block a Dagger's attack with your Zweihander, you'll lose 15-13=2 Stamina (not much at all).

All shields range from 11 to 13 "Parry Drain Negation", which makes them very good at absorbing stamina damage. And none is better than the Buckler, whose PDN of 13 outshines even the enormous Kite Shield and Heater Shield. 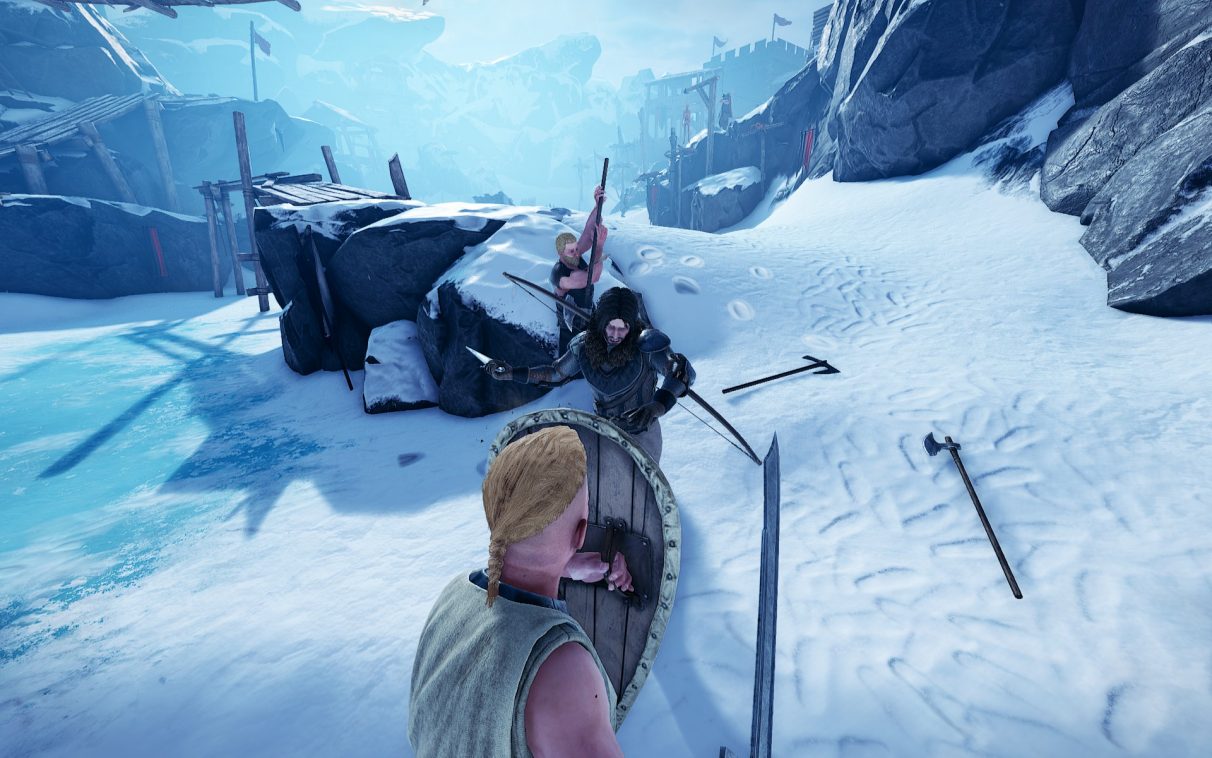 Now it gets interesting. There's an awful lot going on with the Heater Shield and the Kite Shield, so let's get stuck in.

First, their stats. The Heater Shield is the cheaper of the two, which means you can expect the Kite Shield to be the more effective shield - which it is. Not only is it larger in area, but it has a higher "Parry Drain Negation" value and makes it easier to block attacks directed at your legs and feet. Much like the Targe/Buckler debate, the only real reason to pick a Heater Shield over a Kite Shield is if you can't afford the latter.

Now, let's talk about how using these shields actually works. With such a shield equipped, you can hold down your block button in order to block indefinitely until either you are interrupted by something (a successful attack or kick, or getting disarmed), or you release block. Simple, right?

Not quite. You can't attack while you're holding down block, except when you riposte (attack just after you block your opponent's attack). Riposting also lowers your block, so remember to hold block again in time for your opponent's next attack. You'll also find that if you miss an attack, then you'll be locked out of blocking for a short time (much like normal: if you miss with a weapon, it's a little while before you can parry again, which is why missing an attack is so costly in Mordhau).

The other big thing worth noting is that, like any shield or any weapon, blocking will be completely ineffective against kicks. If someone kicks you, the only way to block it is to kick back (which extremely few players have the reactions or the wherewithal to do intentionally). This makes kicking very powerful against Heater Shield or Kite Shield users. 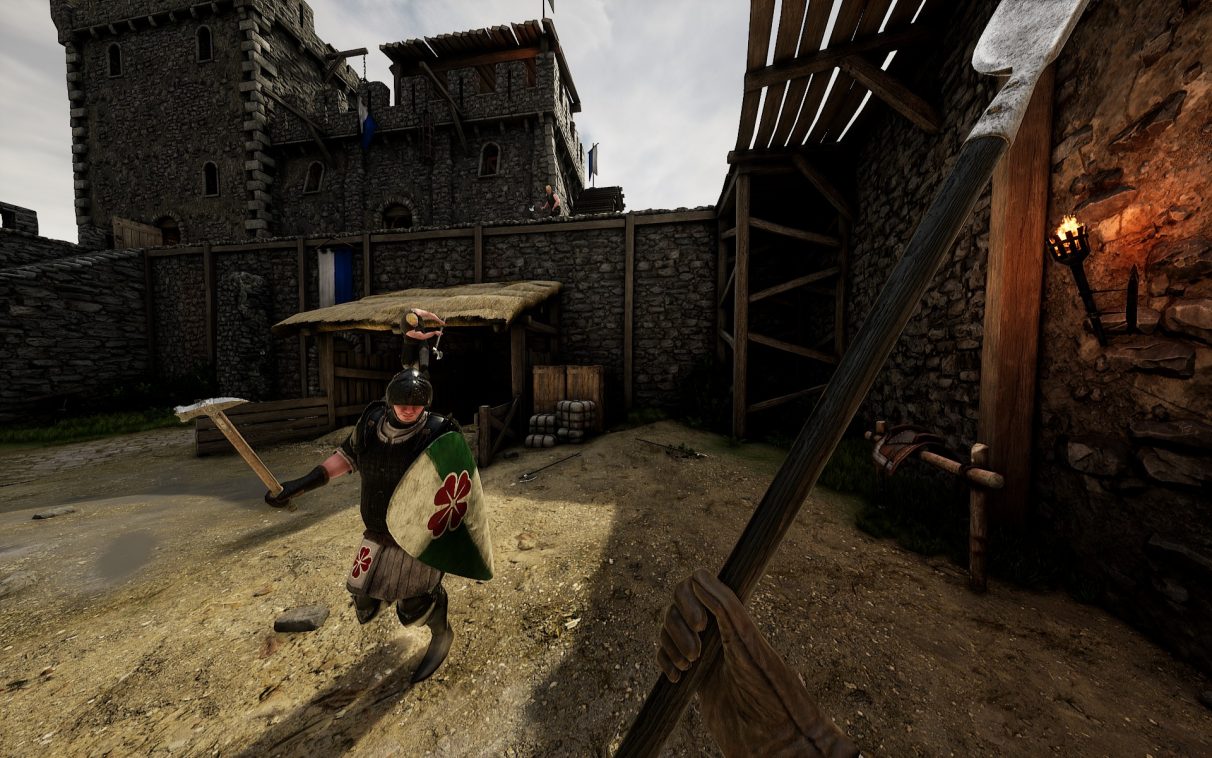 How to counter shields and shield users in Mordhau

I'm gonna do something a bit strange here, and start with how to counter shield users (by which I mean "Held Block" shields; the "Timed Block" shields aren't really worth talking about in such detail). Once you've read through all this, I'll give you some tips on mitigating these weaknesses.

But whether you're here to use shields or to counter them, the best idea will be to read both sections so you know what to expect from your opponent. 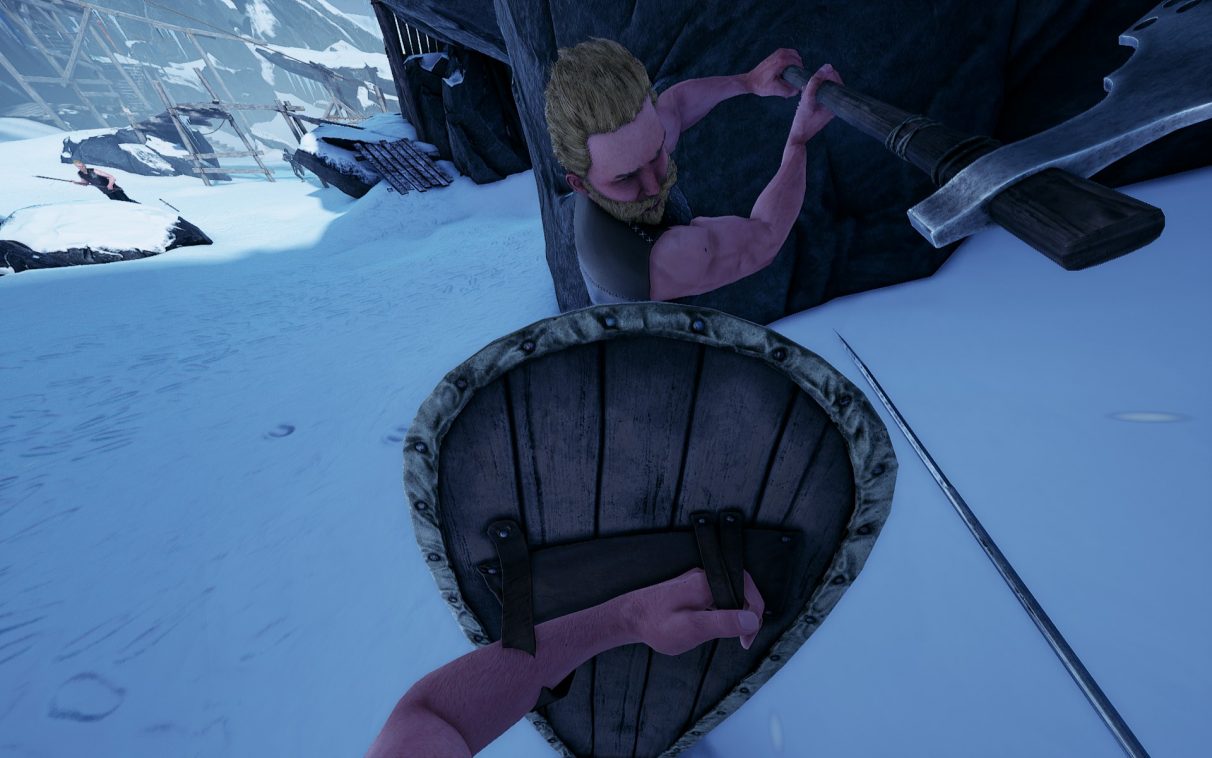 Now we'll go through some advanced shield techniques to help combat the obvious weaknesses that come with using shields.

Aaaaaaaaaaand I think we'll stop there. That should be more than enough to be getting on with, and I don't want to overload you with information. The long and short of it is that a 1v1 with a Heater or Kite Shield involved is a completely different beast from a non-shield 1v1, and there is a whole new set of rules to consider in these situations; but, as always, the victor will go to those who can break the flow of the fight and avoid predictability.