In Mount And Blade 2 Bannerlord, the most efficient way to get new troops for your army is to recruit prisoners who are willing to change their alliances. That's not all you can do with your prisoners though, as you can ransom them for a good source funds for your campaign.

This Mount And Blade 2 Bannerlord prisoners guide will tell you how to capture prisoners, how to recruit or ransom them, and why executing lords or nobles might be a bad idea. 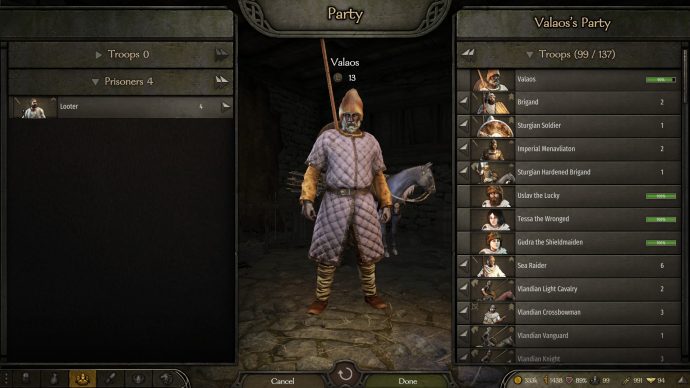 How to capture enemy soldiers in Bannerlord

To capture all kinds of enemies, no matter if they are regular bandits or the noblest of lords, you need to defeat them in battle by knocking them unconscious by using blunt weapons. Taking down an enemy with a bladed or ranged weapon will kill the soldier outright. It's important to distinguish that running over an enemy with a horse will knock them unconscious as it counts as blunt damage, unless you have conched a lance in advance as that is a bladed weapon. You'll know if you have killed an enemy if the notification at the top right of the screen shows a red skull, and a white skull shows they're unconscious.

Keep in mind at all times though that there is a limit to the number of prisoners you can capture. The prisoner number cap is around half of your current troop party size. Should you exceed this prisoner cap, the prisoners will slow your army down in the world map and even have a chance to escape your grasp.

Now that you have captured some soldiers or bandits, what do you do with them? The simplest way to deal with them is to head to the biggest town nearby. These towns have taverns where you can ransom some or all of the prisoners you have, in exchange for gold.

How much gold you get is dependent on the prisoners you have. Looters are worth practically nothing, but if you manage to capture a highly specialised soldier, or even a lord/noble, then they are worth significantly more gold.

Ransoming prisoners also has the side effect of increasing your trade and roguery skill points and I highly recommend taking some time to ransom them one by one to increase those skill points multiple times.

If you capture a particularly strong soldier you may wish to recruit them to your army. You can find a list of the best ones for each region in our Mount And Blade 2 Bannerlord troops guide.

The only prisoners that cannot be recruited are nobles and lords as the option to recruit them is greyed out. You can talk to them, but there isn't a lot you can say at the time of writing.

Bandits can also be converted into normal troops once you have recruited them by having the disciplinarian perk, which is found at Leadership level 125.

You may find that a particular lord or noble is getting in the way in undermining your progress. Letting them go or ransoming them for gold will only result in them coming back later on with a new army. There is one other option, but it's not exactly pretty. To execute a captured lord or noble, go into the party tab on the map and select the named prisoner. You'll see three options, one of which is highlighted in red. This is the execute option.

Executing lords or nobles is highly frowned upon. You'll therefore lose some reputation and the relationship with the prisoner's faction and anyone allied to them will sour significantly. There doesn't seem to be much benefit to doing this, aside from getting rid of a persistent threat. I wouldn't really recommend it when you can just keep a noble prisoner instead.

With that, you should now know everything you need to know about how to handle prisoners of all kinds. Thank you for reading our Mount And Blade 2 Bannerlord prisoners guide. There are plenty more guides in the works, but for now you can check out our other guides for the game, including details for character creation, as well as the bugs that are unfortunately in the game. Here are some guides to get you started: