Mount and Blade 2: Bannerlord has finally charged into early access, albeit with quite a number of technical issues in tow if Sin's early experience is anything to go by. I've yet to become mired in the same loading time issues and mission crashes as she has, so I'm afraid I can't offer any quick fixes for those unfortunately, but what I can talk about is how the game runs more generally, and how to make sense of its various graphics settings to help you get the best experience from Mount and Blade 2: Bannerlord, as well as the best performance. Onwards!

We'll likely have to wait until TaleWorlds Entertainment issue a patch before Mount and Blade 2: Bannerlord's loading and crashing issues get fixed, but in the mean time, here's how to get the game as smoothly as possible using its Performance menu. Below, you'll see exactly what the game looks like on its five graphics quality settings, as well where you can cut corners to try and improve your frame rate.

Before we get started, let's take a quick look at Mount and Blade 2: Bannerlord's PC requirements. As you can see below, both the minimum and recommended specifications are pretty reasonable for the most part, as you don't need an expensive graphics card to get the best from it, nor do you need loads of RAM.

Indeed, you only need the 3GB version of the popular Nvidia GeForce GTX 1060 to run Mount and Blade 2: Bannerlord smoothly, as even the highest quality setting in the game only needs around 3GB of memory. As a result, you should be fine with the 4GB version of the AMD Radeon RX 580 as well rather than the 8GB version.

Instead, the real killer is likely going to be that CPU requirement. Indeed, even Mount and Blade 2: Bannerlord's minimum PC requirement specifies at least an Intel Core i3-8100 or AMD Ryzen 3 1200. These quad-core CPUs both came out in 2017, which is . Contrast that with the age of their minimum graphics cards, which came out in 2012, and that could be quite the sticking point for anyone who hasn't upgraded their PC recently.

Mount and Blade 2: Bannerlord's recommended CPU requirements are pretty much bang up to date, too, specifying an Intel Core i5-9600K or an AMD Ryzen 5 3600X. Indeed, these CPUs only came out last year and are so new, in fact, that they're currently sitting in my best gaming CPU list. Why are Mount and Blade 2: Bannerlord's CPU requirements so high? Well, it's all to do with the size of the game's armies, as you need a lot of computational power to get those hundreds of character models moving onscreen - a bit like Creative Assembly's Total War games. As I mentioned above, I need to play a bit more of the game before I can really test how much of a difference your CPU makes to these giant battles, but watch this space.

Mount and Blade 2: Bannerlord - how to get the best settings

For now, let's focus on Mount and Blade 2: Bannerlord's graphics performance and how to get the game running as smoothly as possible. I've been running the game on or slightly below its recommended PC spec, using an Intel Core i5-8600K running at stock speeds, 16GB of RAM and my 6GB Asus GeForce GTX 1060 OC 9Gbps edition graphics card (which is the same GTX 1060 I use for all my performance tests), along with all the latest Windows 10 and graphics drivers installed.

There are five quality settings in Mount and Blade 2: Bannerlord, ranging from Very Low, Low, Medium, High and Very High. You can find them in the Performance tab of the Options menu, and you can switch between them on the fly without having to reload the game. Here's what they all look like.

As you can see, they're all quite different. Very Low effectively strips the game of all its vegetation, textures and fancy lighting effects, giving you the bare minimum in order to get it running. Low, meanwhile, adds quite a lot of trees back into the picture as well as more detailed terrain, but is quite low on shadows.

Moving up to Medium, on the other hand, does give you those aforementioned shadows to help give the world a bit more depth, and smartens up the amount of detail on show as well. High polishes all that up a bit further, while Very High has even more accurate lighting and shadow effects, and adds prettier-looking character, foliage and environmental details.

The look of the game changes quite drastically when you're walking through its towns and having face to face conversations with other characters as well. Here's what the town scenes look like:

And here's what characters look like up close, too:

In towns and villages, I wouldn't say there's a particularly huge difference between Medium and Very High, and the same goes for character conversations as well. Yes, Medium doesn't have quite as much wafting grass as High or Very High, but trees and mountains in the distance are relatively similar, as are individual character details such as clothing textures and facial hair.

Instead, it's really only when you start playing on Low that the game begins to look decidedly worse. In towns, the foliage gets stripped right back to little more than big patches of dirt, and the lighting starts to look a bit wonky as well. As for character conversations, you can also see old merchant man's beard transform from a reasonably full chin of curls to a straggly, rather sorry-looking patchwork. Even the poor man's eyebrows shrink in size. And Very Low... well, that's more a horror show than anything else.

The good news, though, is that even my GTX 1060 was able to produce a steady 60fps out on the world map when I was playing on Very High at 1920x1080, and often rose to highs of around 75fps. Riding on horseback through towns occasionally saw that figure fall closer to 50fps (dismounting and walking around on foot pushed it back closer to 55-60fps), but overall the game still felt very smooth and playable. 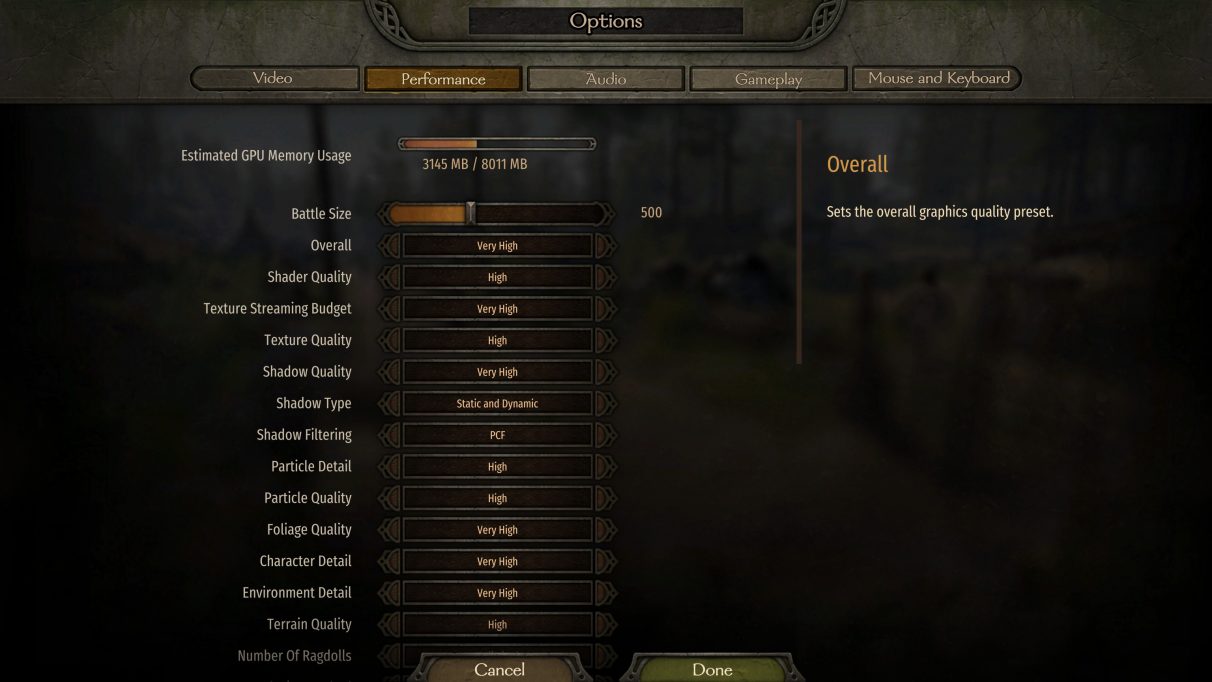 Naturally, dropping the quality down to High pushed those frame rates well over the 60fps mark, averaging around 75fps out in the world with highs of 80fps. Towns and villages were much the same, too, flitting between 70-80fps depending on the complexity of the scene.

Take a closer look at Mount and Blade 2: Bannerlord's settings menu, however, and you'll find there are actually a surprising number of similarities between High and Very High, which makes it easier to pinpoint which settings are the most demanding. Both quality modes have the same Shader, Texture, Terrain, Water and Lighting Quality settings, for example (High), and they both have other effects such as Interactive Grass, Sun Shafts, Subsurface Scattering, Tesselation and Bloom switched on further down the menu options, too, so you'd actually be doing yourself a disservice by dropping these any further.

Instead, it's the other settings (the ones that are different) where you'll want to focus your attention. Indeed, just changing the Anti-Aliasing from Temporal SMAA x2 to regular Temporal SMAA saw my overworld frame rate jump all the way up to 75-80fps on Very High, which is quite the boost for a single setting alteration. Compare that with the 5fps increase I saw by just changing Shadow Quality from Very High to High, and I think you'll agree that dropping your anti-aliasing settings should be your first port of call if you find yourself having performance issues.

The second thing you should do is adjust the Environmental Detail. While this didn't have a huge impact when I was riding across the world map, raising my average frame rate by about 5fps or so, I saw it shoot up by 10-15fps when I entered a town or village on Very High, averaging around 70fps with Temporal SMAA x2 anti-aliasing enabled and roughly 83fps with regular Temporal SMAA. Even better, I didn't really notice any huge drop in overall picture quality, either. 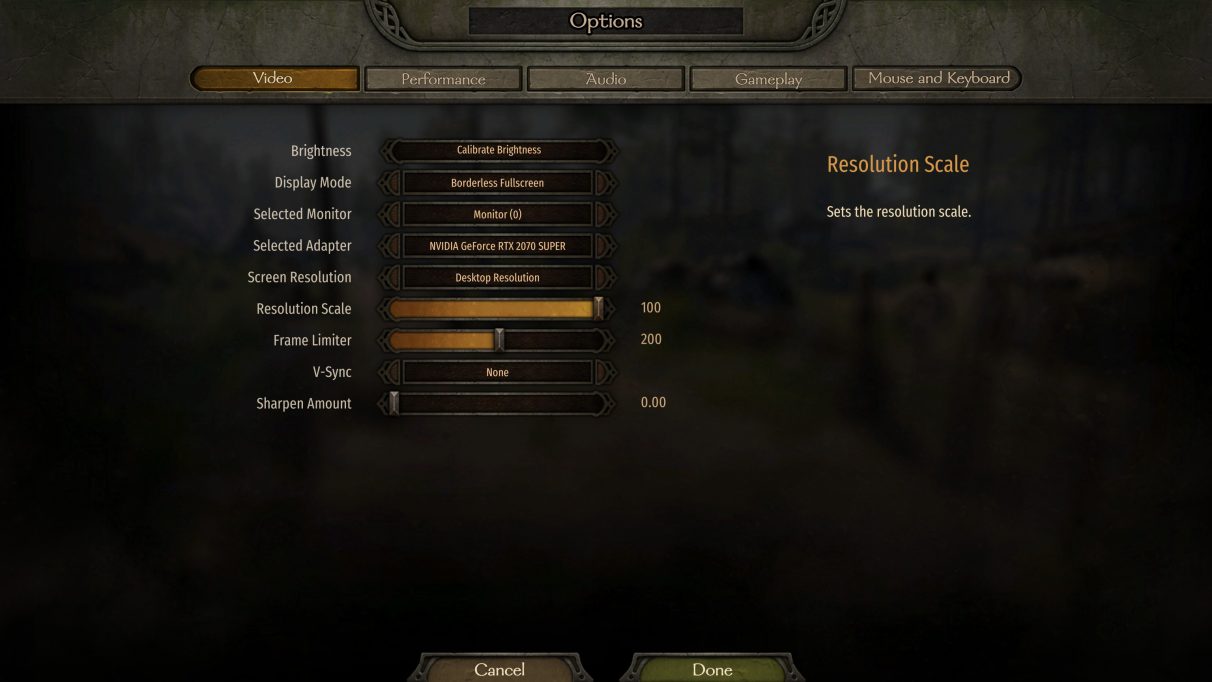 Those were the settings I found had the biggest impact during my testing, but another quick and easy way to improve your frame rate is to take advantage of Mount and Blade 2: Bannerlord's Resolution Scale feature. You'll find this in the Video tab rather than the Performance menu in Settings (as shown above), and it lets you run the game at a percentage of your desktop resolution, such as 90% or 83% of 1920x1080, for example. The game is then upscaled to your chosen desktop resolution, and can help take a bit of the load off your GPU without dropping down a full resolution setting.

In fact, you probably don't even need to go down as far as 90%, as I found that even sticking to 95% did wonders for my frame rate. When I was riding around in towns and villages, for example, I saw a steady frame rate of around 80fps on the default Very High quality mode, which is pretty much the same kind of boost I got from dropping down the anti-aliasing one notch. As a result, if you're adamant about playing with the highest possible graphics settings but don't quite have the GPU power to do it, then making use of the Resolution Scale in this way could be just the ticket.

As I mentioned above, I'll be doing more Mount and Blade 2: Bannerlord testing over the coming weeks to see how you can improve the game's siege battle performance, and how different CPUs can affect the speed of the game, but in the mean time the tips and tricks I've outlined above should hopefully be enough to help you get going with the early hours of the game and help you keep a steady frame rate if your PC is getting on a bit.

And while you're here, be sure to check out our guides team's top 25 tips for Bannerlord beginners in their Mount And Blade 2 Bannerlord guide as well.