When MSI sent me their Vigor GK80 mechanical keyboard earlier in the year, I was only able to test the version that came with red Cherry MX switches. You may recall, however, that it's also available with silver Cherry MX switches as well. Well, now I can finally give you a proper verdict on which one's better, as the silver Vigor GK80 has just arrived on top of my testing pile. Below, you'll find my original review of the Vigor GK80, plus a new section detailing how the red and silver keys differ and what they feel like for typing and gaming.

Even better, MSI has lowered the original price of the Vigor GK80 since I first reviewed it, so it now costs £145 (red / silver) in the UK and $130 in the US (red), as opposed to their original prices of £160 / $150. At time of writing, MSI are also giving away free $20 Steam vouchers on eligible keyboards, mice and headsets (including the Vigor GK80) until August 31 while stocks last, making it even better value than before.

Original review: You have to hand it to MSI for cramming so many keys onto its new Vigor GK80 mechanical keyboard. Glance down at its streamlined aluminium base and you'll see at least sixteen keys with extra function symbols peeking out of the tiny crevasses between each row.

That's in addition to four dedicated media keys in the top right corner and a further eight function buttons along the usual string of Fn keys. For a keyboard measuring just 445x141x42mm, that's pretty impressive. Whether you'll end up using all of those is another matter of course, but (lack of volume slider aside) the main thing here is that you're not having to compromise on style over substance.

Indeed, compared to the rather giant HyperX Alloy Elite I've just tested, the extra desk space I've gained back is pretty sizable, making the GK80 a better fit for those with smaller desks. It's not quite as small as the Asus ROG Claymore, but at least the GK80 doesn't make you pay extra for a number pad.

Admittedly, most of the GK80's extra function buttons relate to its RGB lighting system, which is just as well, really, because MSI's two (yes, two) dedicated bits of configuration software are so unintuitive that you'll want to avoid using them as much as possible. You'll probably still need to consult MSI's bundled instruction manual to find out what they all actually do (because there's a lot of them), but it sure beats having to deal with its confusing Mystic Light tool. 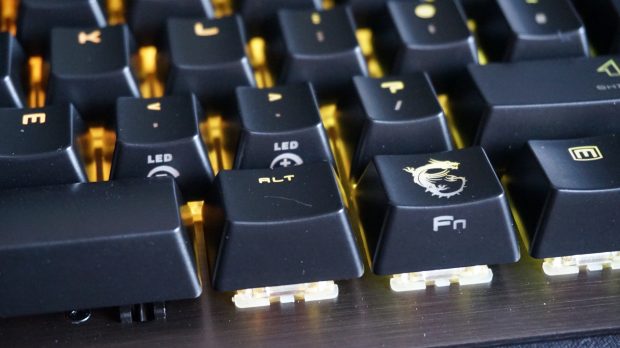 There are 14 different RGB modes in total, including three special game modes for Overwatch, League of Legends and CS:GO, but you can also use the GK80 to change the performance profiles on your compatible MSI Gaming motherboard and MSI Gaming graphics card, allowing you to switch between silent, gaming and overclocked modes without disrupting your game. Handy if you're decked out in MSI kit, less so if you're not.

Instead, much more useful is MSI's own gaming mode for the GK80, which can be turned on by pressing the Fn and Windows keys. This disables all system notifications and ensures each key press gets registered no matter how many keys you're pressing at once.

Silver ones (sometimes referred to as Speed Silver) are very similar to Cherry's red offering. They're linear and require the same amount of operating force to press down, but the key thing that sets silver switches apart is their even shorter travel distances - 3.4mm in total as opposed to 4.0mm. This means you don't need to press them down quite as hard in order for each keystroke to register and they reset back to their original position faster. This, in theory, should make them even quicker than red ones, which may come in handy if you play games competitively.

Personally, I couldn't really tell the difference when playing games. Both felt equally responsive to me, and my ancient reflexes simply aren't nimble enough to take advantage of the silver's shorter travel times - at least not when most of my gaming movements are confined to the WASD keys, anyway.

If anything, I only really noticed the difference when I came to use them for general typing. Here, it definitely felt like my fingers were able to zip between keys a little faster due to the short travel distances, but this sense of floatiness to each key press also made it feel like I was making more mistakes as a result. I wasn't confident I'd actually pressed them down properly on the silver GK80, and I kept having to pause and second guess myself.

Switching back to the red GK80, on the other hand, felt much more reassuring. As a result, I'd recommend sticking with red Cherry MX switches if you're going to be using the GK80 for both gaming and typing in equal measure. 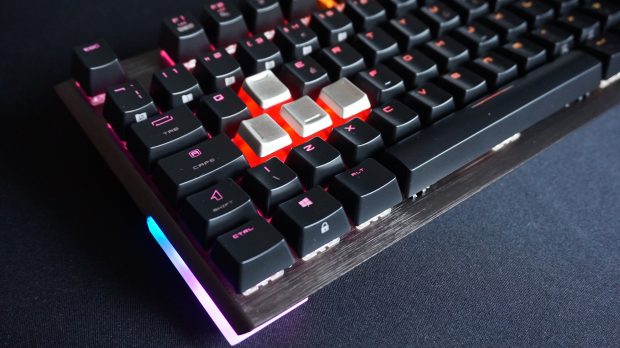 You'll also probably have noticed the GK80 comes with metal WASD caps (pictured above) rather than rubber ones like the rest of the it. I found these caps too smooth and slippery for my tastes, and they made playing fast-paced games like Doom more of a chore. Thankfully, MSI have had the foresight to include a full set of textured rubber WASD replacements (along with a spare space bar, back space, eight regular caps and two Ctrl/Alt-sized caps) if you don't like them. There's even space to pop all of them inside its bundled wrist rest, too, which is a nice touch if you're travelling or just want somewhere to store them for later.

Bizarrely, the wrist rest doesn't actually attach to the rest of the GK80, so you can place it where you like to get the comfiest position. In one sense, this is brilliant, as pushing it right up to the edge of the keyboard made everything feel just a tad too high and cramped. On the other hand, it's a right pain in the backside, as it's yet another thing to move and re-position if you ever want to adjust where your keyboard sits on your desk. This is more me being lazy than anything else, so I probably shouldn't complain too much, as I really quite liked the feel of its soft-touch rubbery finish under my palms and it genuinely made typing a lot more comfortable over long periods of time.

Having come straight from the blue Cherry switches of the HyperX Alloy Elite, however, I must admit that the red switches on the GK80 do in fact feel a fraction softer and less forceful during everyday use, which, depending on your personal switch preference, might make them less suited to reams and reams of typing.

There's not much in it, in all fairness, as the red GK80 still provided more than enough tactile feedback and overall comfort while I was writing these very words, for instance, and I rarely made any mistakes or had to slow down my typing speed in order to accommodate its different typing style. Overall, though, I think my personal preference lies with the sharper, cleaner keystrokes of the blue Alloy Elite - but that's not to say you'll also like them better as well.

In terms of noise, they're just as rattly as each other to my ears. The GK80's clacks are slightly lower in tone than the high-pitched Alloy, but neither of them are any less family-friendly than the other. As a result, you'll still need to use them out of human earshot, unless of course you particularly enjoy having your respective housemates or family members use your head as target practice in a bid to get you to type more quietly.

My only real concern with the GK80 is the positioning, or rather labelling, of its media keys. From a normal seated position, I can barely make out the symbols on each of its four dedicated buttons, and it's not until I lean right over them that I can actually see what I'm pressing.

That's not very convenient when you're mid game and want to whack up the volume or mute it altogether, as you've still got to make a conscious effort to look away from the screen to make sure you're not about to burst your own ear drums by pressing the wrong key. Given the amount of free space just below them, too, it makes little sense to a) make them so small and b) have them hanging half-way off the upper edge.

Overall, though, the MSI GK80 is a fine mechanical keyboard - and arguably one of the best gaming keyboards for RGB fans. Its new price also brings it more in line with its other mechanical rivals such as the Corsair K70 Lux and number pad-less Asus ROG Claymore, but in many ways it's much better value for money, as you not only get several extra key caps in the box, but the movable wrist rest gives it a lot more flexibility than its rivals - plus there's a $20 Steam voucher in the offering until August 31 as well.

If customising your LEDs down to the nth degree without having to deal with any software is important to you, then it's probably worth any extra over the Corsair and the Asus. If you're not fussed about the RGB lights, though, and just want something nice for typing and playing games alike, then the Fnatic Streak (£120 / $130) is still my top recommendation.