It was explained to me that Mutazione is a difficult game to play on a loud and busy show floor. At conventions and trade shows, someone might notice a free demo station, pick up the controls, noodle around for a few minutes, and then run off because they only have half an hour in which to snarf down an overpriced sandwich. But Mutazione is quiet, slow, and invites consideration. It’s difficult to get a feel for it in a few minutes. It needs slow-cooking. Like in a melting pot. Ho ho.

Mutazione is a sort-of-adventure game, with the closest point of comparison I can think of being Night In The Woods, or perhaps a splash of Undertale, but with less millennial malaise and more just people doin' stuff. Maybe Oxenfree? Developers Die Gut Fabrik refer to Mutazione it as "a mutant soap opera".

“I love reading, I love the way you can pace your own story and project all of the stuff in there,” said Nils Deneken, creative director (also responsible for art, story and design). “But the thing is, with games you can explore, you can kind of present people with a world they can move in.”

Mutazione is set in a world where a meteor hit an island resort, decades ago, and eventually a community of mutants evolved on this one island. You play Kai, who is visiting her grandfather, one of the only human inhabitants. Deneken explains that the environments are mostly organic, or use natural shapes. Underground you’ll see huge loops of tree roots, and the surface level has the ruins of the old town, but overgrown. Nature dominates the whole picture.

It feels like a real place, in that you can see how the town was constructed in a way that makes sense. Here’s the dock, and there’s the little town centre area with a bar and a hairdresser and restaurant, and higher up away from the water are more homes. The library is a bit further out, in a way that makes it feel more… municipal. 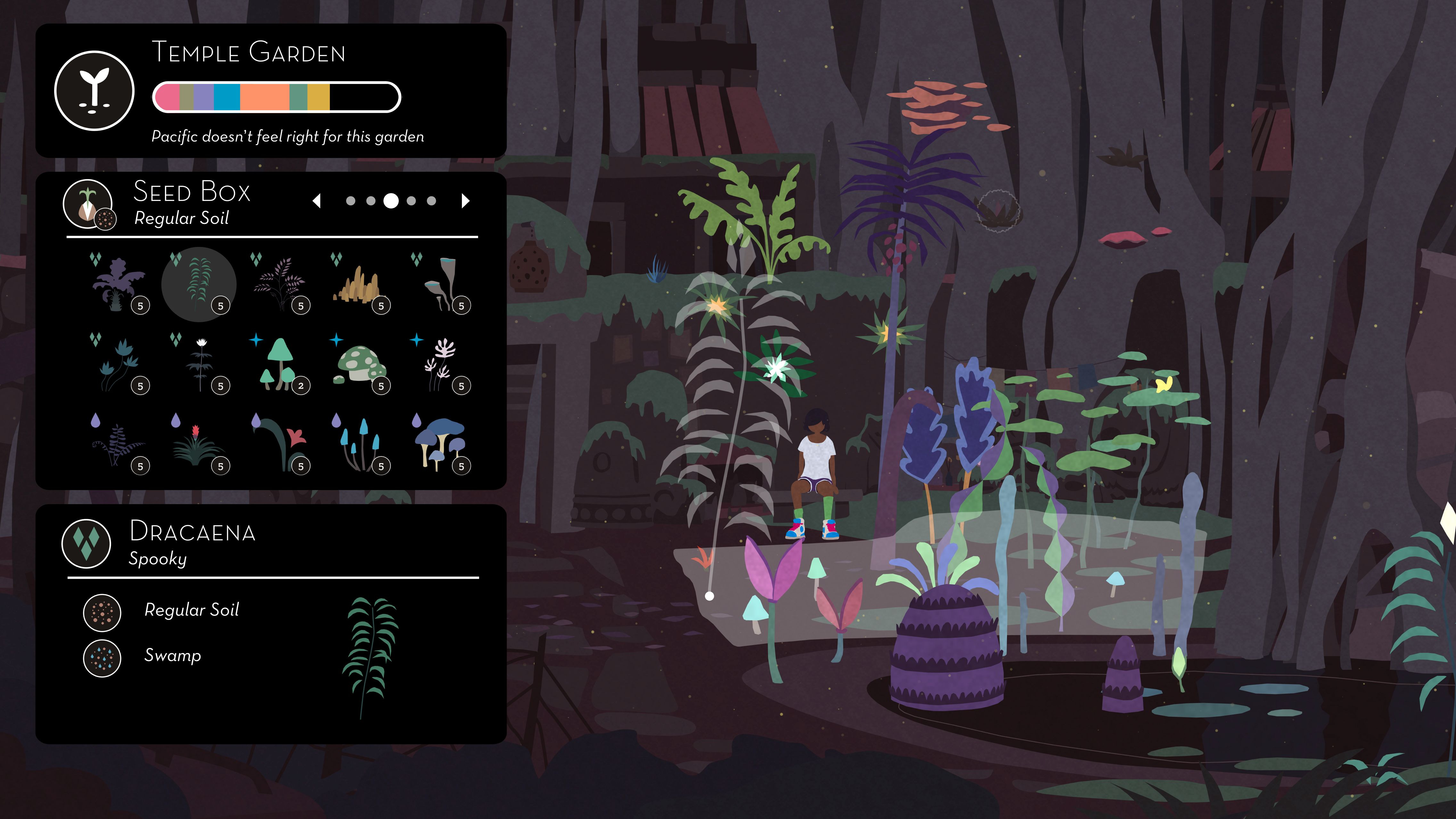 Dotted around are gardens, some are deliberate flower beds waiting for seedlings, others are unexpectedly fertile patches of earth in the corner of a swamp. You can collect seeds and cuttings from fully grown plants you find while you explore, and sometimes the locals will ask you to cultivate a particular flower or leaf for them. Plants and gardens have a kind of preferred mood, like Pacific or Spooky, and to make plants grow you need to play them a song they like.

Music is very important in Mutazione. Deneken cites the compositions by Alessandro Coronas as one of his favourite parts of the game. The environment is full of little details, subtly moving plants and wildlife, and Coronas’s music is controlled by an algorithm so it feels more natural too. “It changes over the days, and the time of day, and it never feels repetitive,” said Deneken. Mutazione does not have files like ambienceloop.mp3 playing even for background noise, said Doug Wilson, co-owner of Die Gut Fabrik. Characters aren’t voiced, but each has a different sound associated with their text popping up on-screen

I spent a lot of time in the demo just sitting in a garden by the sea, planting spiky succulents in a wall and humming to them. The story is linear, but advances in beats over a day. Your friends invite you on a dawn boat trip, for example, and you can spend a while walking around before you meet. It’ll stay dawn until you leave. The pace is as slow as you want it to be. 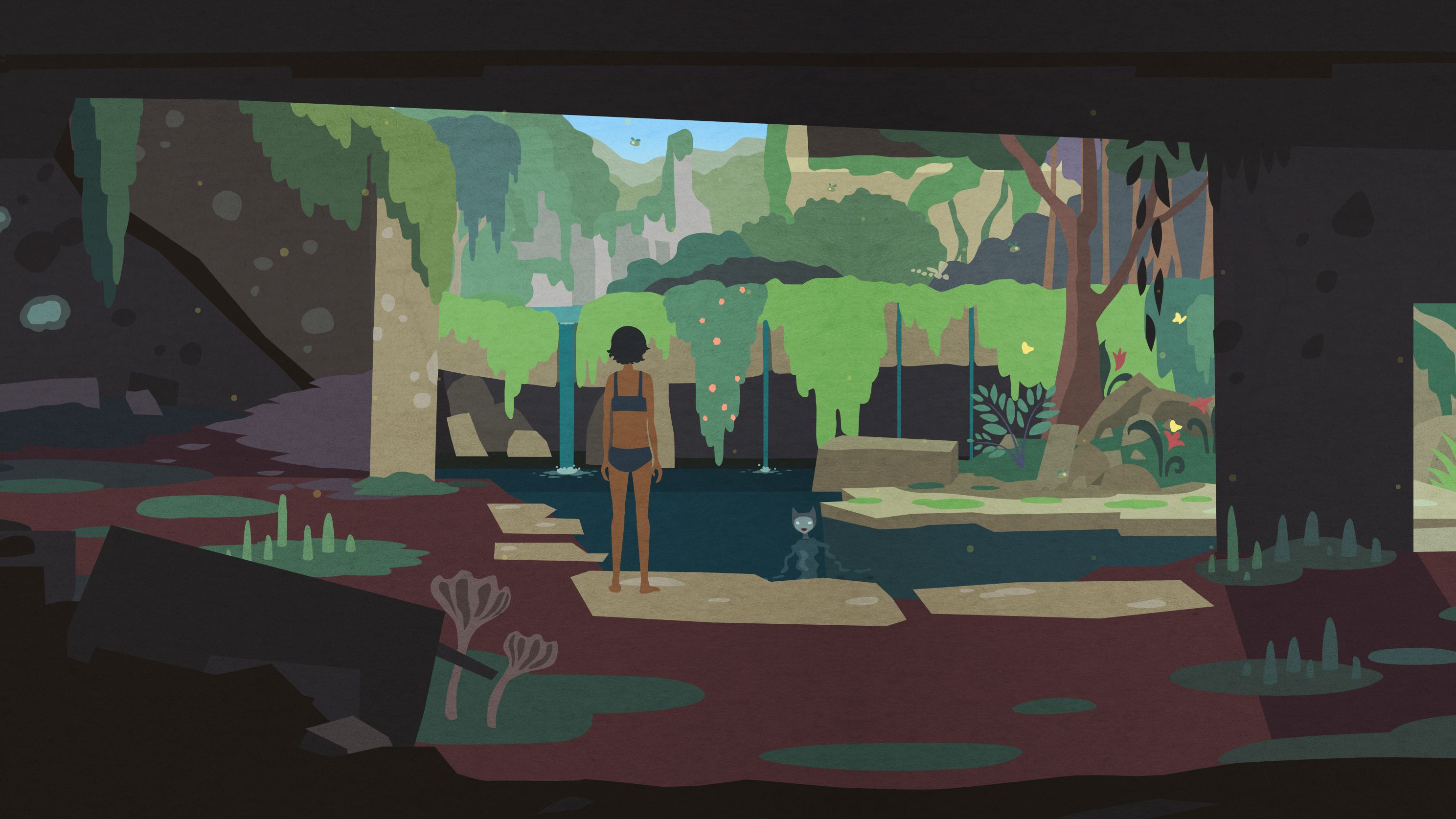 Wilson, who is doing some design and audio programming on the game, said he thinks there’s a lot of questioning of what agency in games means, and counts Kentucky Route Zero as a big influence. It is probably no coincidence that Hannah Nicklin, Mutazione’s writer and narrative designer, is also a big fan of Kentucky Route Zero. So there are dialogue options, but they’re not interested in choices like ‘you’re evil or good’ or ‘you save your grandfather or you won’t’. Those choices, said Deneken, don’t really say much about you. Mutazione is interested in ensemble cast stories, rather than making it all about Kai as a protagonist.

“We're kind of influenced by television,” explained Wilson. “That intricate web between different characters, the same way as if you watched Twin Peaks or Star Trek. There's this lovable ensemble cast, who all have issues with each other but it's really satisfying.”

While Kai is a character in her own right, and has her own story, her own complex relationship with her grandfather, Deneken says the story of the villagers is equally, if not more, important. That’s why they call it a soap opera rather than a straight-up adventure game.

“It's more about talking to people and finding out what happens in the community, and try to help out. But it's not that you're always the centre of the action.”

A few days have passed in the part of the game I'm playing. The night before, Spike, who owns the bar, had been aghast when a love song he’d written was played in front of almost the whole town. I found the object of his affections getting her hair done and fretting about it with the hairdresser. All involved were, of course, not human, but that’s sort of the point. Wilson says that the mutants are treated as the baseline, and they try to very quickly normalise them. “They’re basically pretty normal,” said Deneken.

The locals are a mix of slinky catlike creatures, fuzzy almost-dogs, green lizardy types, and groups of happy little perambulatory jelly beans. While non-human or mutant characters are often used to represent the idea of ‘the other’, in Mutazione there’s a “flip” as Wilson put it. Kai, after all, is the odd one out in this situation. And the mutants are just hanging out watching TV. As the game goes on, some more political topics emerge. What did it mean for scientists to come and ‘study’ a community? What effect did that have?

I met one local who was an amoeba-like jelly originally cultivated by one of said scientists, grown into full consciousness. That’s some pretty intrusive studying. “There are some deeper issues working there,” said Wilson. “But all coming from this baseline of friendly people who have very relatable romantic, personal, and other issues with each other.”

Hard to argue with that. Soap operas are, after all, popular for a reason.

Disclosure: Hannah Nicklin, the writer and narrative designer for Mutazione, has written articles for RPS in the past. 11 of them, to be exact.