Last time I wrote an update on my town in Foundation, a very sweet medieval city builder, I had described said update as "biannual". I am upgrading that to "quarterly", having checked in on it again today and found that I need to reassess several things I claimed in aforementioned previous update. I claimed, will what I now view as ill-deserved confidence, that "once you get your head around it your town will just thrive."

"Much like the desk plant I recently got," I, a stupidhead, went on stupidly, "neglect will not destroy my town in Foundation." That is technically accurate. But I made food and water available to my desk plant, and it has absorbed the nutrients I provided and has sprouted a new shoot. The population of my town in Foundation, meanwhile, is growing furious and leaving for pastures new because they are starving. And they are starving because they won't eat any of the mountains of bread available.

Since we last logged in, there have been some nice changes. The name generator seems to have run out of names, so a lot of my villagers are called FEMALE #10045 or similar. War has arrived, but in a pleasantly remote way. The king will just ask you to commit troops, and luckily my wooden keep is finished so I have tiny soldiers to send. They are regular citizens with a metal hat on, but they toddle off to wage presumably genteel war, and I get a nice bump in funds when they return.

Speaking of, I finally demystified the workings of the treasury system, to whit: you can assign parts of some municipal buildings a specific purpose. By making almost every room in my mansion a treasury, I more than doubled the size of my purse. I say I demystified it, but really I read about how to do it in the Help menu, which is another new(ish) addition and explains some of the FAQs or more general aspects of the game. It's still modest in size, but it should help new players to no end.

My favourite of the new things I've found is that messages now turn up via an emissary on a pony. Look at how furious this pony is: 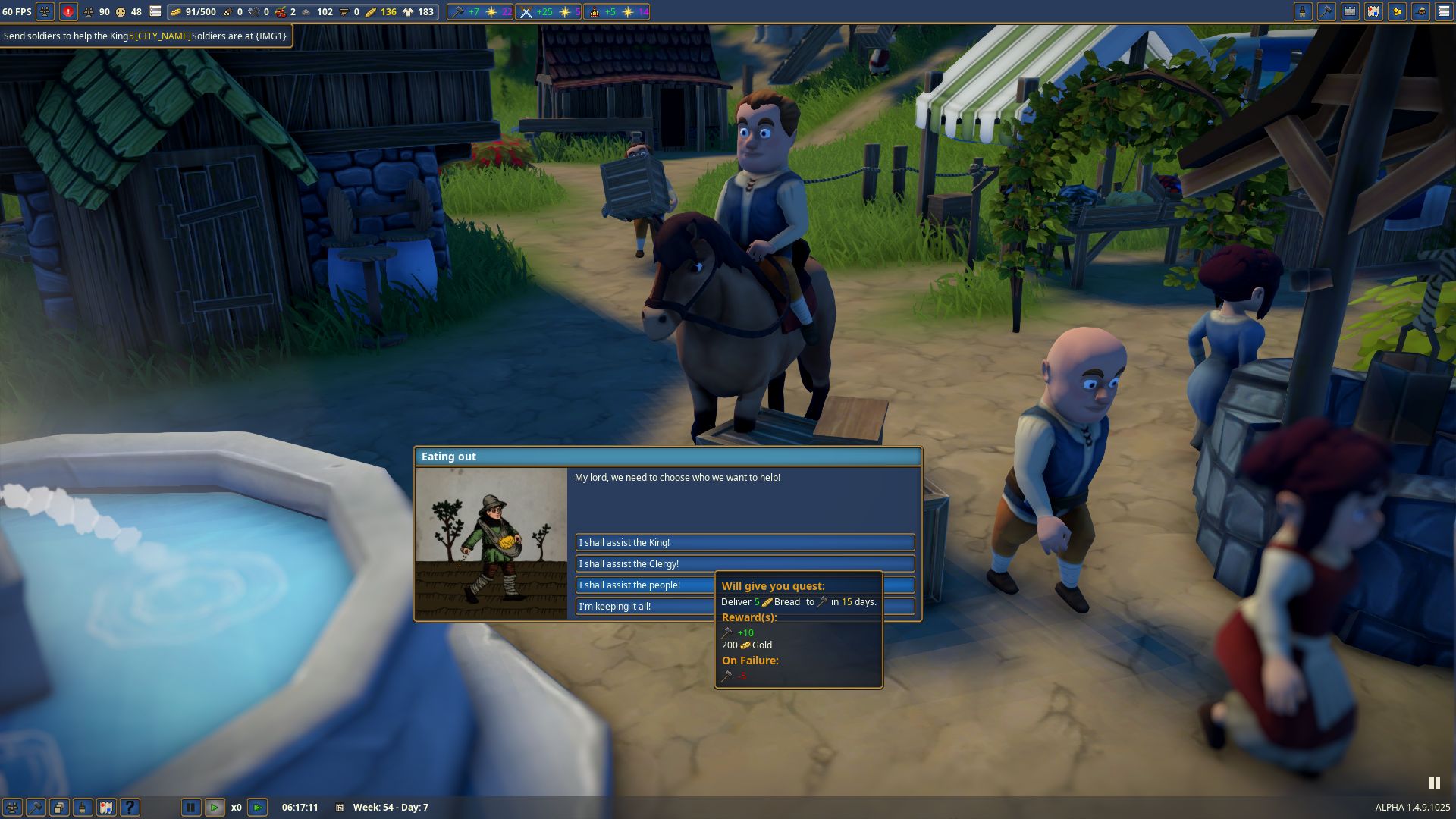 Good bits must also include the tavern I am building near the original residential area. I am gathering the needed resources before I start construction, but it should turn out pretty well. It's a sturdy but modest design to start with. I am proud of the blueprint, so it is the header for this article.

I have, however, encountered a food problem, and I have no idea how to fix it. Initially I thought it was another symptom of my stupidity, but at this point I think I have just rolled an entire nation of either a) coeliacs; b) extremely picky eaters; or c) folks who get acute heartburn if they eat bread. Vidbud Matthew says I should rename Aliceburg to Heartburn City. Basically, despite having a comical amount of bread in storage, about half of the entire town is bloody starving.

I searched for "Foundation villagers are -" and it autocompleted "- lacking food" and I found a few people asking for tips. It turns out you actually have to have a lot of food - more than you would for comparable games, I think - and do some town planning for the supply chains of same. Villagers actually eat when they are hungry and thus have different eating cycles. If your market traders live too far from where they work, or the warehouses are too far from the market, and so on, it can waste a lot of time and make it difficult for villagers to get their delicious medieval nutrients.

That isn't my issue though. I have a lot of different edibles, enough markets to service the different areas of town, and those markets placed a careful distance from the food supply chain. The only one that isn't within a brisk trot of the warehouses is actually the only one keeping villagers well fed, because it's in the fishing district and is supplied directly from that.

I'm not going to make any bones about this: it took me fucking ages to set up my bread chain, which was explicitly to replace the foraged berries they were all subsisting on previously. I had to build a wheat farm, get a windmill up while I was waiting for the harvest, and then throw up a couple of bakeries. That's not none resources spent, let me tell you. The agricultural related industries are all clustered together up on a hill, so the bread itself is made very quickly. Then there's a granary half way down the hill, acting as a bridge to the warehouses and markets lower down. It is a chef's kiss of a supply chain. It is bleedin' brilliant. I should be an actual town planner. You can all suck it.

And it apparently works really well, because I am producing enough bread to stock all the Greggs in the North East. Bread is flying out at a rate of knots. I'm like Joffrey Baratheon off of Game Of Thrones. But there is an extremely weak link in the chain, and it is that these dickheads will not eat the bread. Or, to be very precise, the vendors will not sell it. There are two markets assigned to sell bread that are almost literally next door to warehouses full of bread, and they will not go and get the pissing bread. The white stuff. Look at the loaves, filling up blocks of my storehouses like big floury turds: 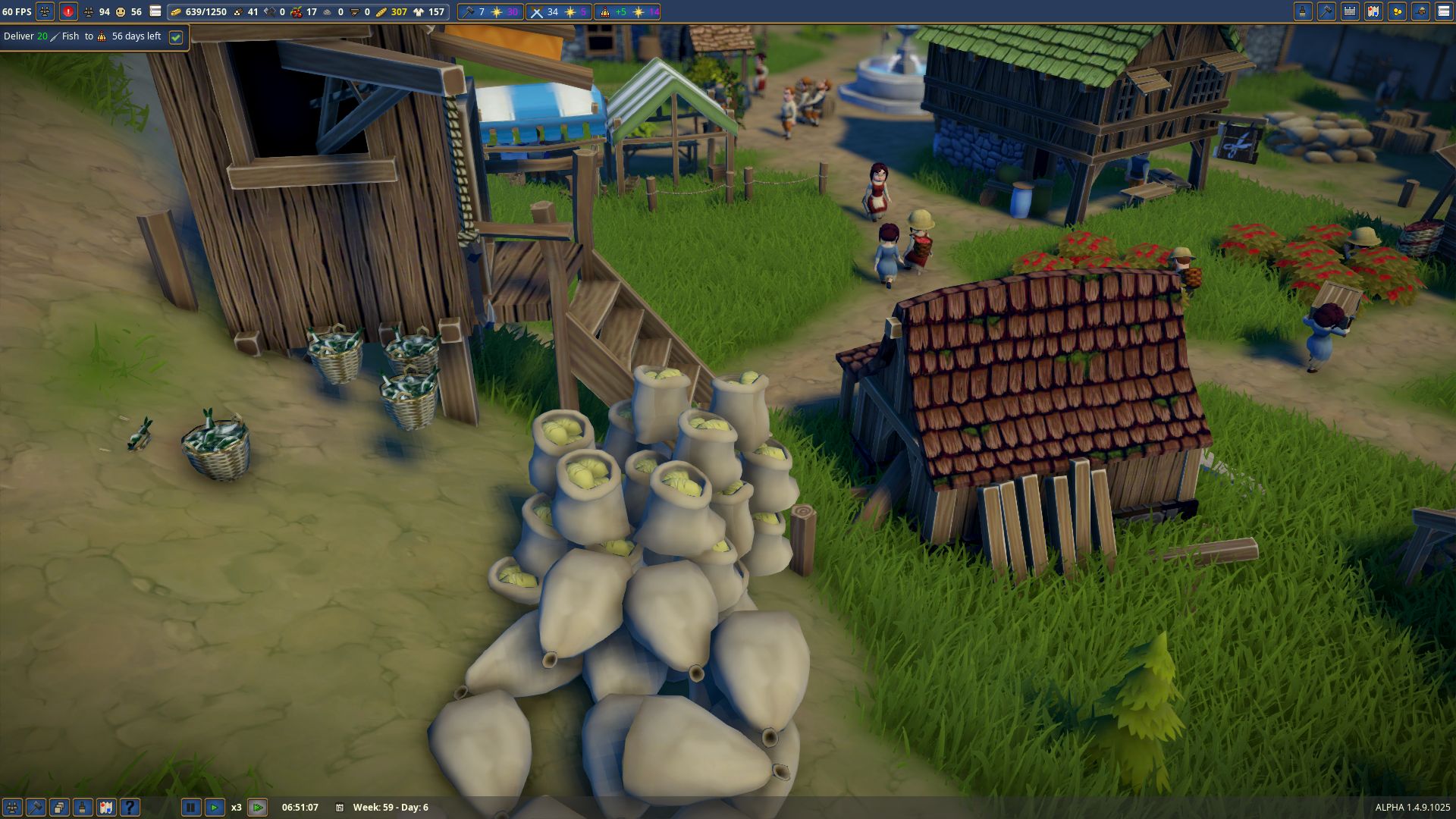 How much bread do I have, you ask?

A lot of bastard bread.

And they have the gall, the temerity, to complain that they are lacking food. They are eating handfuls of cold, muddy berries and telling me they're hungry.