Each of my annual returns to No Man's Sky finds a very different approach to a very similar game. Last year proved rather delightful. This year's major patch, called Next, has me wanting to ship out before I've even left the first planet.

I spent an awfully long time with No Man's Sky back in 2016. Having gone in without over-hyped expectations, I reviewed it as I found it. I was met with a strangely serene experience that infuriated me as often as it delighted. I found myself hooked on its grind for reasons I struggled to justify, created some of the silliest distractions, yet felt delighted to keep on playing, until I eventually reached my own arbitrary, imagined goal: a 48-slot ship. This was necessary after the soggy flap of a conclusion to its so-called Atlas Path plotline. That done, so was I, and I stepped away.

Then came last year's Atlas Rises update, and I went back in for a short while. And I was really pleased with what I found. Lots that had been bad was good, 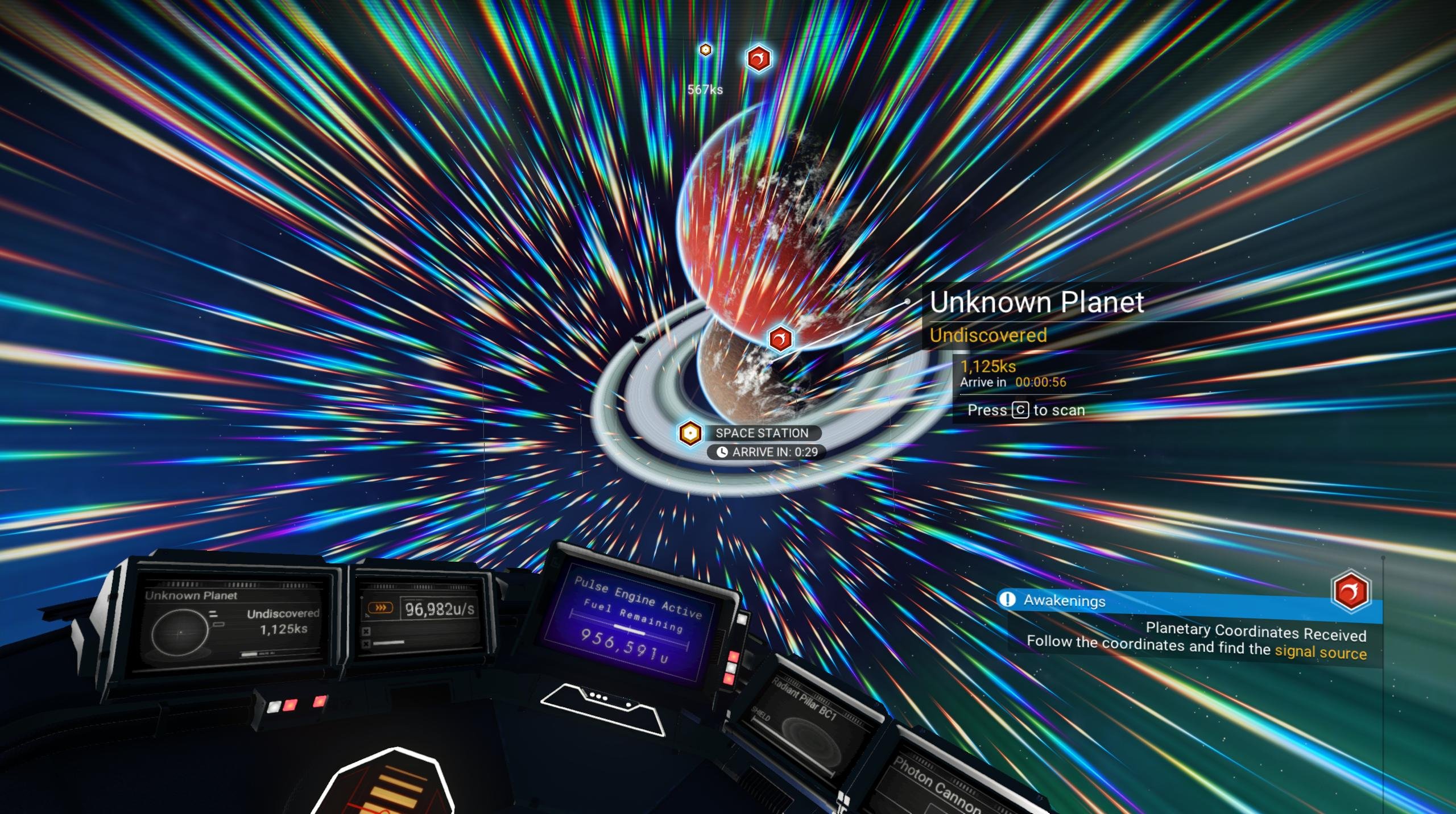 No Man's Sky's beginning was, originally, very ambiguous. You just chanced upon a broken ship in your own time, and figured out what to gather to fix its broken parts. And it worked! But it wasn't particularly focused. Last year's version improved this a great deal, adding in an admittedly hokum plot (you've lost your memory, sigh) but one that rationalised seeking a ship and getting it working. And it used this process as a tutorial of sorts for the more complex elements of the game: crafting, building and repairing.

Returning once more this week, I was yet again immediately thrown by how much has changed in a year. Trying to carry on with an old save felt mad, because so much was so different I felt alien in my own ship. So I once again started over, and the rather sad news is, they made the beginning worse again. And, unfortunately, that's not because of an even dumber story - it's because they've made the basics of resource gathering and building needed to get the ship running into a drearily over-complicated and fiddly mess. 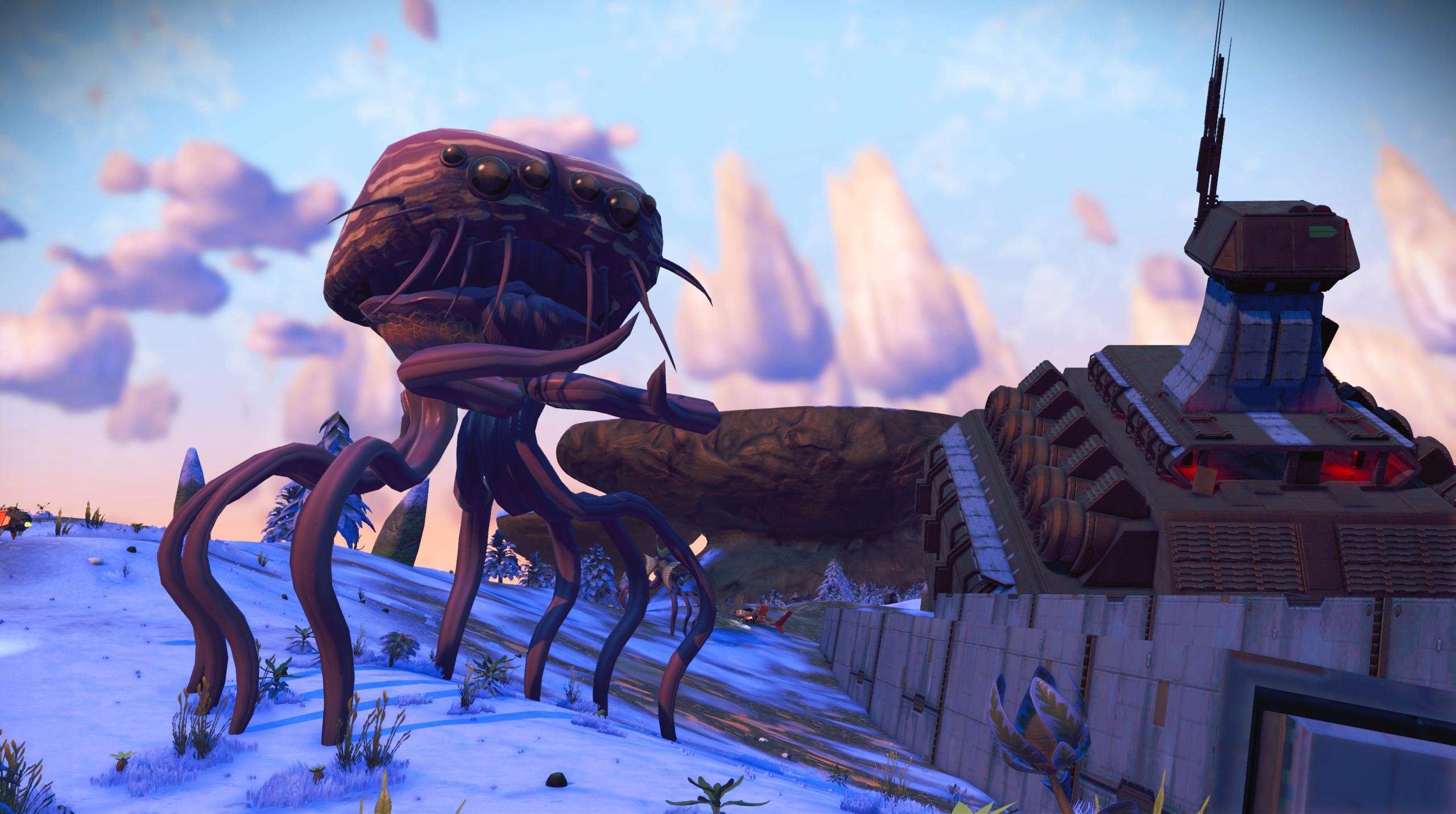 Now, rather than laserbeaming your way through enough rocks, trees and minerals, and then going through the inventory card game of generating constituent parts and combining them into useful items, it's far more involved. Blurring the boundaries between last year's base-building addition, you now need to gather resources to build machines to place on the ground. Then use these machines to create blueprints for other things, or use them to refine materials into other materials. And combinations of both. And then make items in your inventory to build other machines to trigger further crafting to make... ARGH. It's so ridiculously jumbled, every menu seeming to have its own unique set of hotkeys and clicks, that not a single moment of it is vaguely intuitive.

Combine that with NMS's perennial issue of randomly generated planets meaning your starting location may literally be impossible to survive on (at the start you have none of the equipment needed to stay outside on the most hostile planets), and you've got an opening that reeks of a game mired in its own open development. 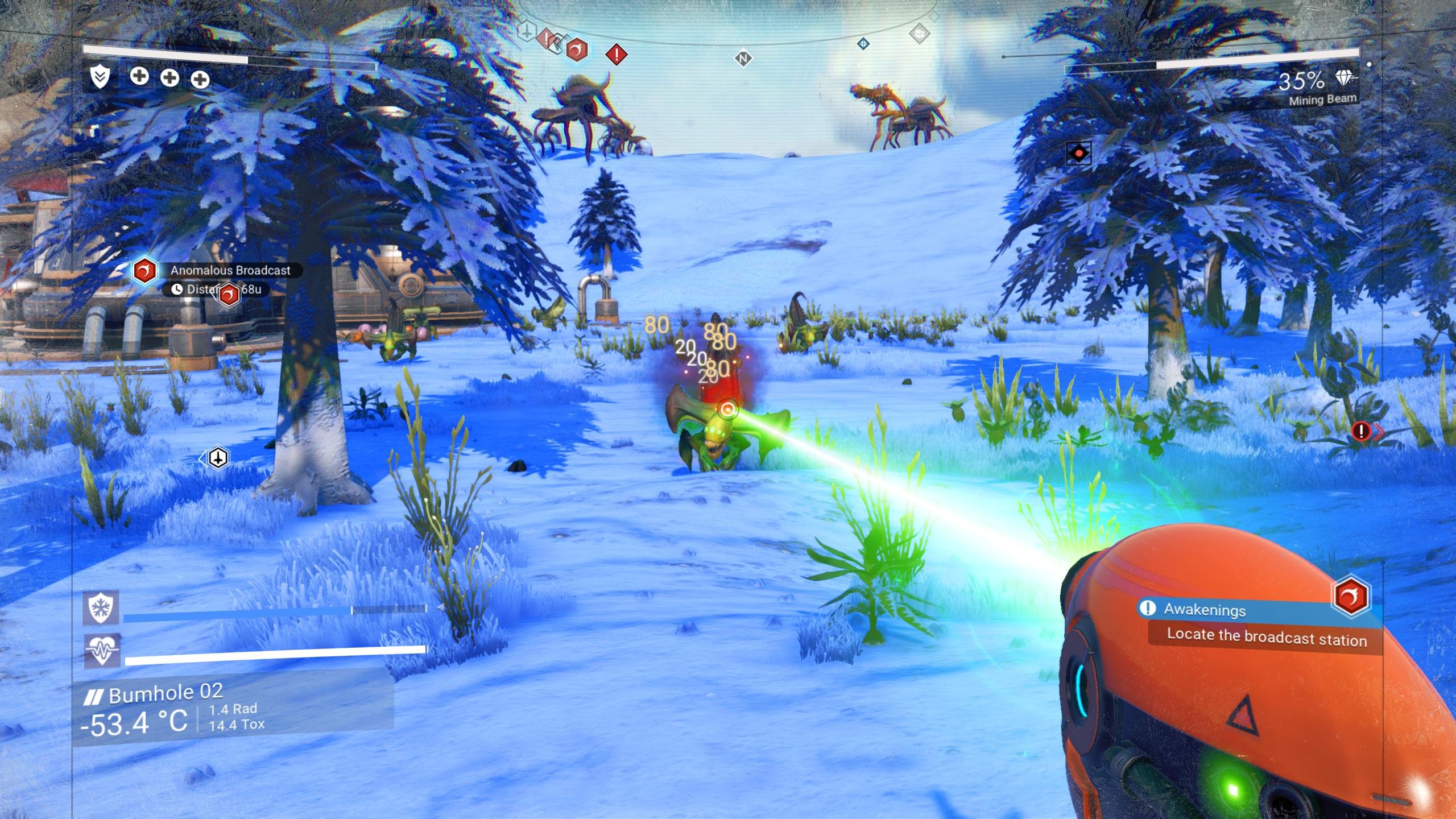 More usually a feature of games that have spent far too long in early access, No Man's Sky feels like a game that's made for people who already play No Man's Sky. When an available game's opening is reworked and reworked, iteration colliding with iteration, both the developers and current playerbase seem to lose track of accessibility, and that is woefully apparent in No Man's Sky's latest incarnation. Already being a very familiar player, I knew to just wearily restart the game three times until I got a planet that wasn't outrageously toxic with Sentinels that attacked on sight. Three times it took me to get a habitable starting location where I could wrestle with all the daft new faff. None of this would be communicated to someone coming in cold, who would be left to assume that either the game was idiotically difficult, or broken.

Even as one so seasoned, I began to wonder if I wanted to bother. Processing elements in the Portable Refiner takes an enormous amount of time, for seemingly no good reason. It'll take a minute and a half to change some cobalt into "ionised cobalt", during which you can, well, wait for that to be done. There's no reason I can fathom why you can't just gather, say, 100 of something to then be able to click it into 10 of something else. This deathly dull process has added a massive amount of complication to the most boring aspect of the game - combining inventory slots. 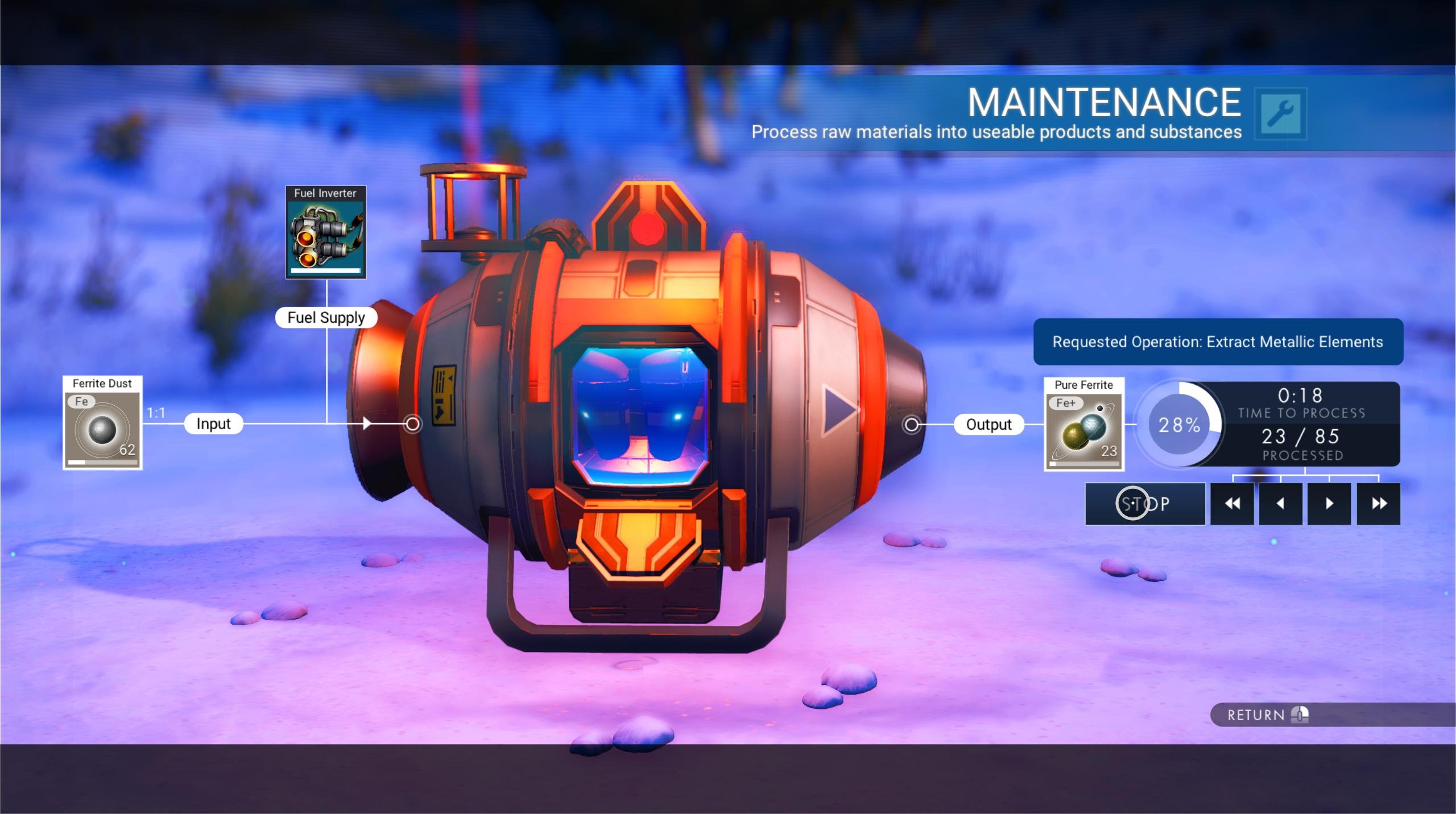 This portable refining tedium just escalates, as you're soon asked to craft objects that require materials to be refined, then refined again! What were they thinking?! If it were free-to-play shenanigans, where you could pay money to skip these timers or something, at least there'd be an apparent rationale for their inclusion. Here the process only serves to make the game more boring to play.

It's emblematic of everything that makes the game so obtuse to start today. Each menu seems to have contradictory controls, leaving me never knowing if I'm supposed to be left clicking, holding down left click, or pressing E, F or X, and even something as simple as moving items between your inventories is now a confusing jumble of both. Once where you could open a green box on the ground by just pressing a single key to get its contents, now you have to press X and select a menu to move some "rusty parts" out of the way, before it then dumps the item inside into a menu of its own choosing. It's like they went through every single system and pondered how they could make it far more of a fiddle. 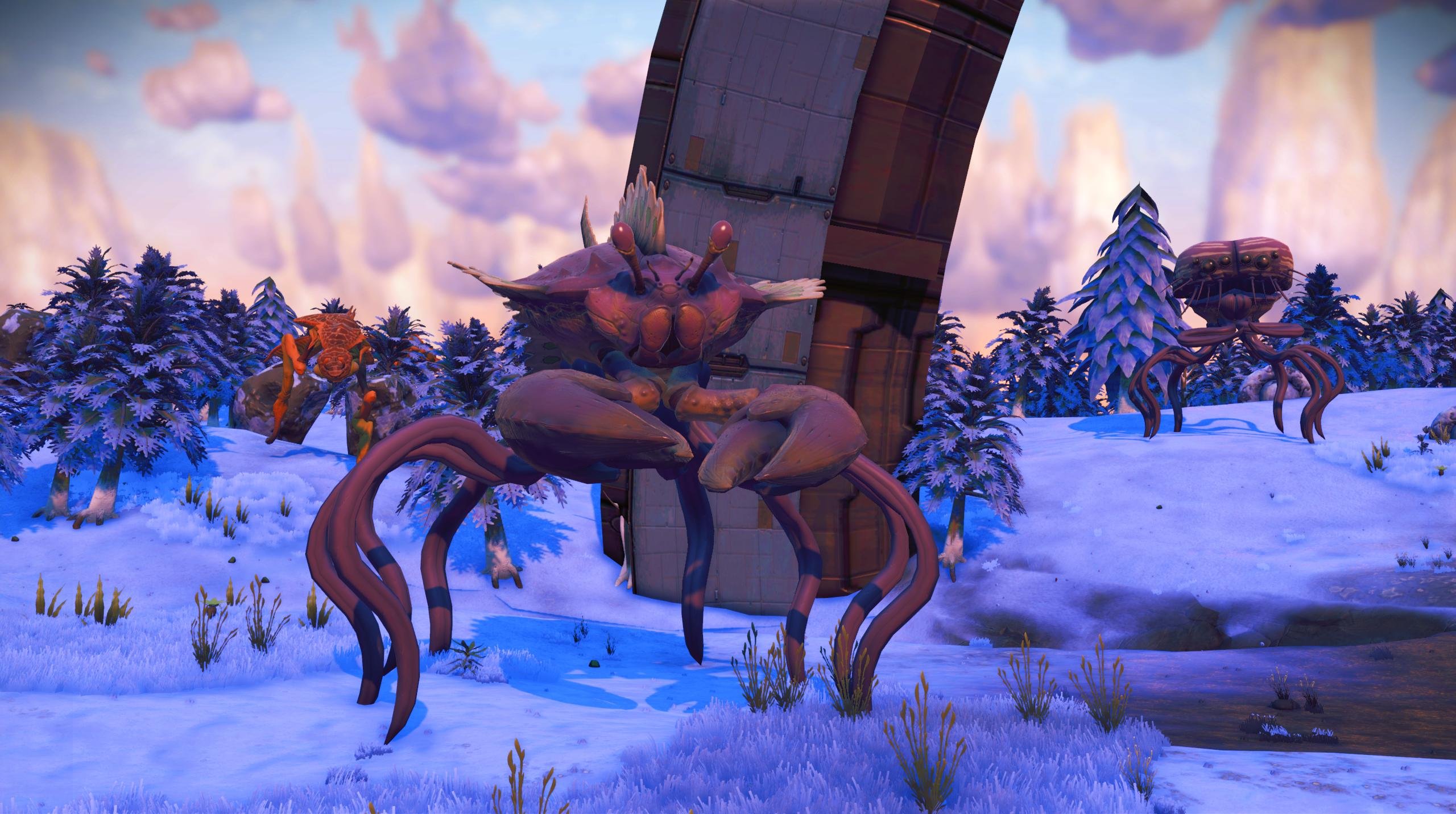 And yet despite its desperation to scatter everything with new buttons, I was absolutely stuffed if I could find the one that lets me switch between first and third person - a listed feature of this new patch. I pressed every key on my keyboard, and scoured the menus repeatedly, but could find no option. Yet one time when I started a new game on a lethal planet, I spent my brief time alive stuck in third-person, and then the next start I was stuck in first.

Eventually Alice found an article dedicated to the solution at her old haunt on Shacknews, which explains you have to go into the horrendous new X menus, that cycle through oblique icons to conceal dozens of options, and buried in there are some camera mode options through which you can change the perspective. Not a key! Oh no! Not an option in the Options menu! Why would it be?! 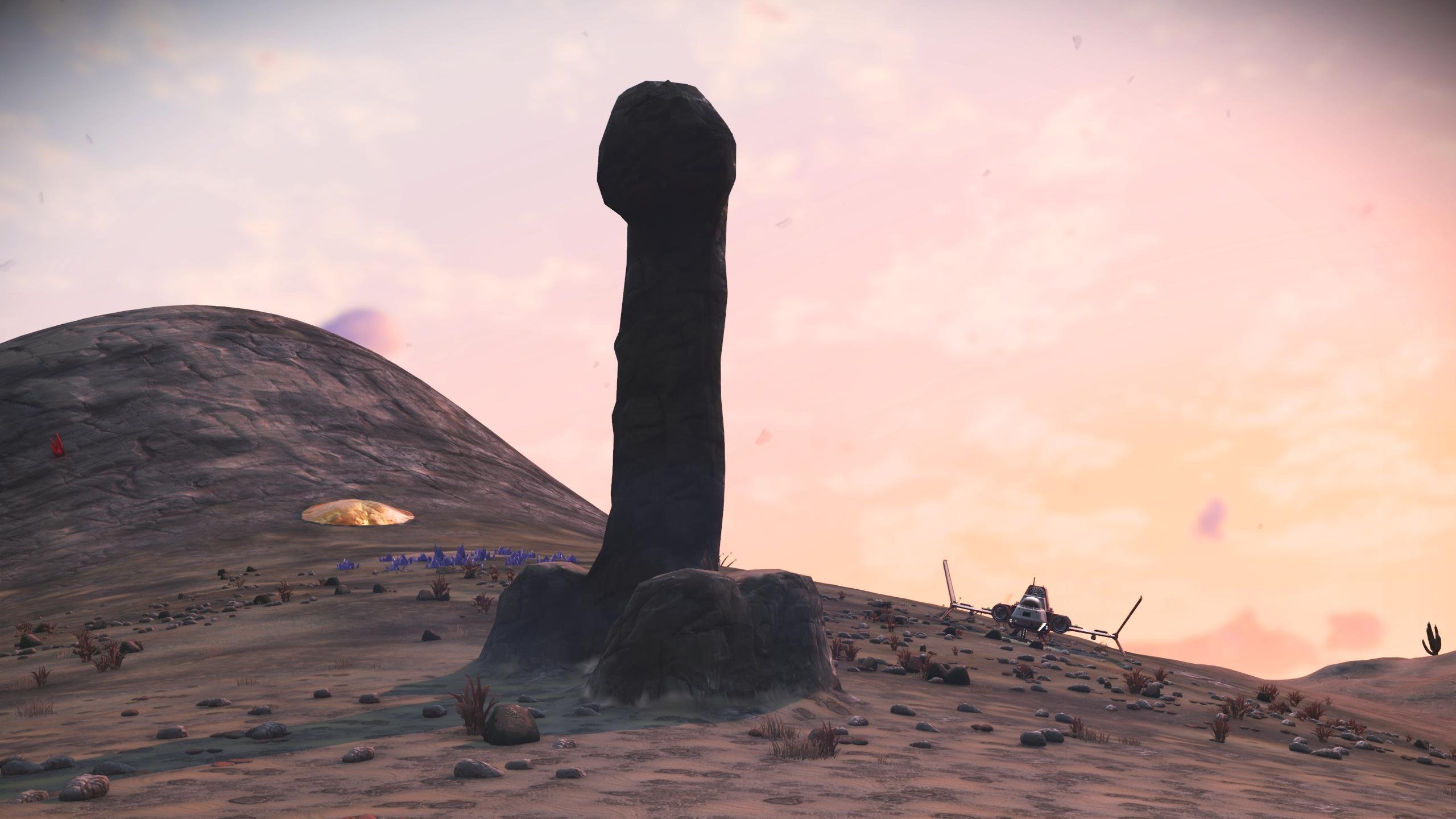 We'll eventually get to talking about the bigger changes in NMS, most especially the potential of the multiplayer, but this gruesome start needs to be documented and commented upon. It's a gruelling and tedious process set in a shambles of menus within menus on top of menus, and a clusterfuck of keys and options, that seems to have come into being as a sort of developmental silt, layer upon layer built up over time. Which is such a colossal shame, because last year the same part of the game was good.

Matthew reports he's just found a way to make money incredibly fast in the game, to bypass all this rot. I am chasing after this, so I can find the new fun in a game I still so desperately want to love.