If you read System Shock 2’s patch notes on Steam you might notice something unusual, as I did. In the list of fixes, additions, and technical talk, there's a note thanking "Le Corbeau" for providing the patch. It's an official patch that the game’s publishers pushed onto Steam, but reading the note it looked to me like they didn’t know who was updating their game. Can that really be the case? Spoilers for this article, but the answer is “yes”, and Le Corbeau remains anonymous to this day. Even after two decades, System Shock 2 still holds onto its secrets.

System Shock 2 was released on August 11th 1999, in the sort of critical spotlight that casts long shadows. An immersive sim set on the spaceship Von Braun, it's taken on a near-legendary status. Without it, there would be no Bioshock, no Prey, no Deus Ex, no any number of weird FPS/RPG hybrids. But it sold poorly, and fell into a strange, complicated web of ownership when the original developers, Looking Glass Studios, shut down. It finally became the property of Star Insurance Company as nothing more than an asset. But in 2013 it somehow got a re-release.

Back in 2012, Stephen Kick, CEO of Nightdive Studios, was in the middle of a year-long trip through Mexico and Central America. It was a stormy night in the Guatemalan jungle when he was struck by the urge to revisit the Von Braun. But things weren’t so easy back then: “The game wouldn't install,” he told me. “So I went to GOG.com assuming that a compatible version would be available." Reader, it wasn't. Yet, at the time, System Shock 2 was the number one requested title on GOG.

This is where most of the gaming world would hit a forum or, for the less scrupulous, perhaps a torrent site, but Kick took a different approach: he emailed the legal team representing Star Insurance. "They requested a call to discuss my proposal of re-releasing the original games, as opposed to developing System Shock 3, an inquiry they fielded often from many interested parties."

Kick had just got off the phone, having pitched a plan to hire some of his friends and reverse engineer the title, when the news broke that a patch had appeared -- and it didn't just make the games playable again, it made them work almost flawlessly.

This patch, known as NewDark, appeared on a French Thief fan forum called Ariane4ever. It was the work of an unknown coder simply known as ‘Le Corbeau’. Le Corbeau was a newcomer to the forum but had somehow delivered a patch that brought all the games made on the Dark Engine up to modern standards, releasing System Shock 2, both Thief games, and the editor DromED from their 90s technological prison. They’d even updated the demos. 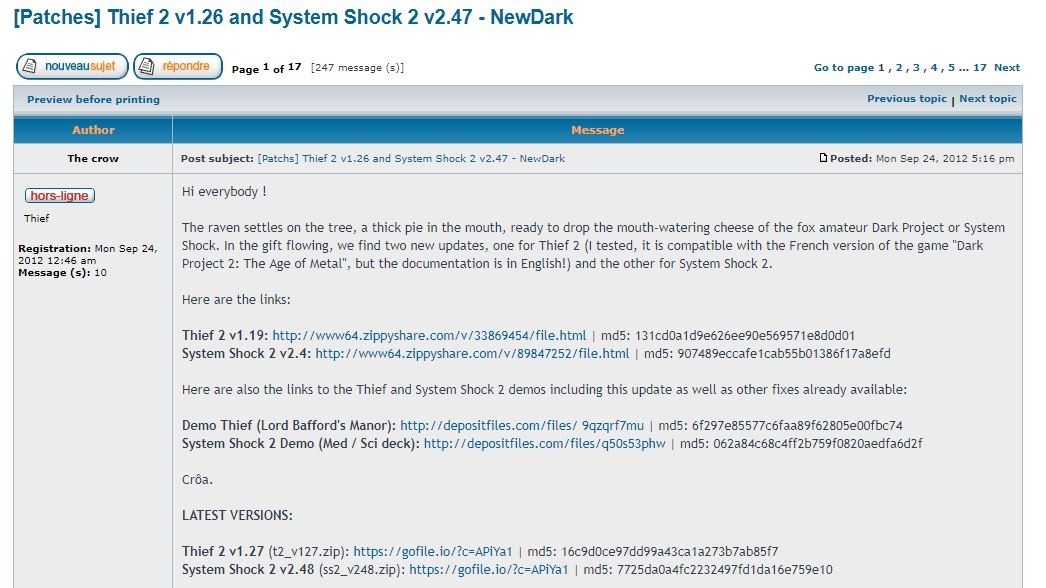 The impact of NewDark can’t be understated. The patch notes were so ludicrously complete, a laundry list of fixes that entire communities had dedicated years attempting to hack around, that people worried the patch was fake, potentially even a virus. But it was real. Hard limits coded into the engine had been increased, codecs changed, resolutions were updated, bugs squashed. Even the editor was future-proofed: “DromEd will no longer stop working after 03:14:07 on Tuesday, 19 January 2038”. System Shock 2 was modernised.

The timing was perfect for Kick. After the deal with Star Insurance was signed, he immediately approached GOG with the license. "I provided them with the fan patched version, and explicitly informed them of the origins of the patch and that I claimed no personal ownership, or had permission to use it.”

But how had Le Corbeau pulled it off? The only reasonable explanation was that they had access to the source code. To trace that, we have to skip back in time again, this time to 2010. A modder on the Dreamcast Talk forum announced that they had a devkit Dreamcast. After a frustrating attempt to get into the unit’s hard drive, he finally managed to dump its contents. But that find wasn't the important one here.

More interesting for the history of the NewDark mod was an old disc in the bag the machine came in. That disc contained the source code to the Looking Glass games. Though it didn’t provide immediate access to Dark Engine’s secret vaults, it was the start.

Explicitly linking Le Corbeau to this source code has proven impossible, simply because you can’t get in touch with them, but it makes sense. The timing of the discovery and the work that was done, including reverse-engineering the essential libraries that were missing from the code on the disc, all line-up. 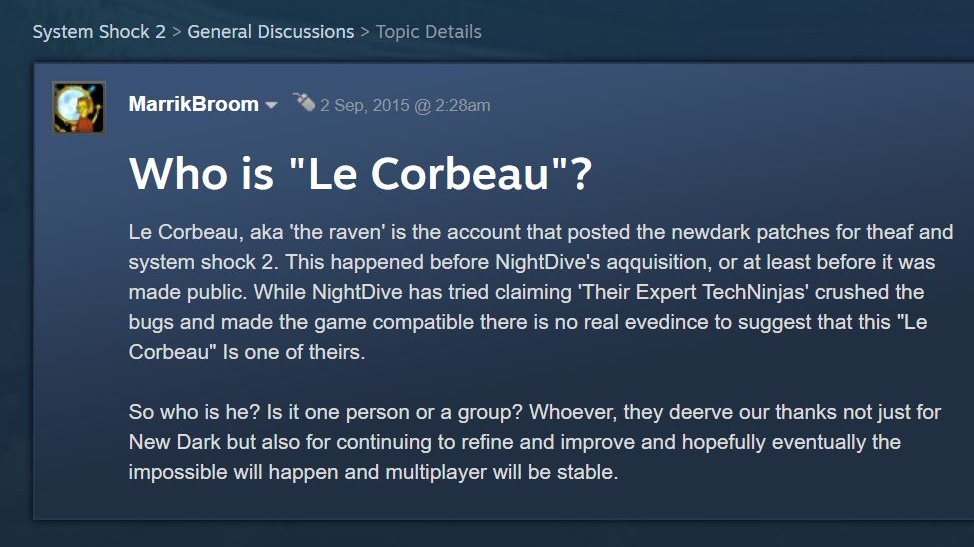 But even though we don't, do Nightdive know who is patching their game? Well, yes and no. Stephen Kick hasn’t managed to uncover who is working on the game. He's tried to reach out over the years, with no success, because he wants to coordinate their future efforts. "They have done an amazing job, but at some point those efforts will collide with our own as we wish to improve the original title, most notably the multiplayer, which is in dire need of support."

They've managed to find the source code to the original System Shock (in Looking Glass founder Paul Neurath’s closet, naturally), and released it to the public, and also recently recovered the source code for System Shock 2. Now they have it, and the strength of an entire studio, there will be further updates to the game.

Kick said that they'll "do something similar to what we did with the first System Shock", keeping the original version available with Le Corbeau's patch, while releasing a new version of the game with their KEX Engine. “Our current plans are to create an Enhanced Edition with a number of improvements, the most important being a working, stable co-op multiplayer experience,” he said.

All this has led to an unlikely rebirth for a game series most people thought would stay in the 90s. Nightdive has since acquired the rights to System Shock and is currently working on a reboot of the original, which has had a tough gestation period at times. Kick acknowledged that "development definitely hit a snag a little over a year ago, but that's the reality of game development".

Now, though, he said that “the team is working very hard and at this point we're not concerned with how long it's taking, all we want to do is deliver the best experience possible and stay true to the original vision."

“I'm just extremely grateful for the continued support and patience from our backers," said Kick, who then told me that they're currently working on the enemies and weapons -- the hardest part, as these elements are the most different from the original. He described results so far as "encouraging" and "exciting".

And then there’s Otherside’s System Shock 3, of which little is known. As it should be.

“It's very surreal at times,” Kick mused. He still remembers borrowing a copy of System Shock 2 from a friend in middle school, going home that night, playing the game, and having "one of the most amazing gaming experiences of my life". Now Nightdive owns the IP, is updating the original entries, remaking the first game, and facilitated a new sequel by some of the original developers. "On the first phone call with Star Insurance, they asked me if I wanted to make Shock 3, which at the time would have been impossible," he said. "But here we are 7 years later and it's being made all because one night I couldn't get Shock 2 to run on my PC.”

We have Le Corbeau to thank for much of it as well, of course, but we still don't know who they are. They could just be a very dedicated modder. Perhaps they're a developer at one of your favourite studios. Their name means "The Raven" in English. Stay in the shadows -- in the dark! -- mysterious Raven. You’ve earned your peace.