If you click on a link and make a purchase we may receive a small commission. Read our editorial policy.
Nuts review
Nuts is a benign indie mystery in the same vein as Firewatch, about using cameras to track enigmatic squirrels. It's solid, if you can handle the sheer amount of trudging about involved.

In Nuts, you are a recent graduate who has been sent out into the woods to research squirrels. But the squirrels, needless to say, are not as they seem. Getting to the root of this forestry mystery involves putting down remote cameras during the day, and then reviewing the footage in your caravan by night, to see what the little fellows get up to after dark. It is a superb, simple premise, and with each set of scamperings you track, a little more of the game's story is doled out to you.

But well-told though that story is, I found it only just compelling enough to motivate me through an awful lot of trudging back and forth along the same paths, as I trial-and-errored my way through camera placement puzzles. It feels so cruel to say this, when Nuts goes out of its way to avoid feeling repetitive, and to make its environments pleasant just to exist in. Indeed, it's not a fatal flaw, by any means. But it's a telling moment when you wonder where the "run" button is, only to find you've already been pressing it for some time.

The immediate point of comparison Nuts brings to mind is Firewatch. Here too, you are on your own in the woods, carrying out a supposedly mundane job, with only a lone voice on the end of a radio - or in this case, a phone - as company. And of course, just like in Firewatch, your professional situation becomes stranger as events unfold. But despite my initial assumptions, these are very different games. 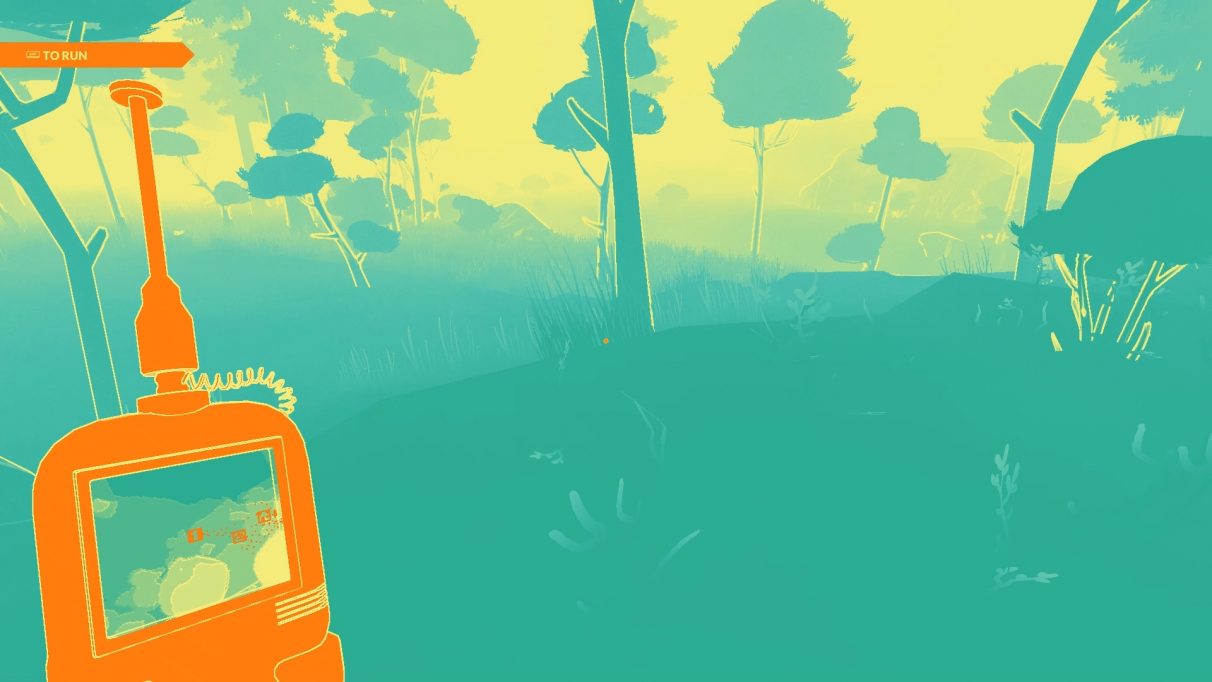 Nuts' most obvious distinguishing feature is its art style, courtesy of Pol Clarisou. Everything in the game world is modelled in 3D, traced over with a sleek white wireframe, and filled in according to each level's confident, three-ish-colour palette. During the night segments, the white wireframes become black, and the colour palette shifts. Shader work (Freya Holmer) is subtle but used to powerful effect, suggesting distance or darkness as required without jarring against the simplicity of it all. Taken as a whole, it's a bold, elegant way of achieving a gorgeous 3D world on a limited budget.

Lovely rodents
Considering the central role of squirrels in this game, emphasised further by the fact they are the only visible entities in the world (you have no body yourself), it would have been a shame if they had looked rubbish. Luckily, they're brilliant, with an extraordinary range of animations provided by Kalonica Quigley giving them all the charisma they need to hold the game's focus.

It did give me pause, early on, when my idealistic employer Nina (whose phone calls deliver Nuts' story) was giving it the big one about the beauty of being in the woods, while I looked out of the window at a pastel-yellow sky, and the featureless teal silhouettes of trees. But that's impressionism, innit? Without wanting to sound too pretentious, I found that all the blank textures managed to feel more immersively woodsy than half-arsed foliage textures would have done, as they gave my brain space to paint the real thing over the top of what I was seeing. A sort of colouring book for the mind's eye, I suppose.

The sound helped a lot with this. Without a hint of hyperbole, sound designer Almut Schwacke (who also did a solid turn as the voice of Nina) has produced some of the best foley work I've ever heard. I am not, typically, a person to get excited by sound in games. But here, I walked over a patch of loose rock repeatedly, just to marvel at the sheer reality of the clacking sounds as it shifted under me. This environmental work - the wind in the branches, the wood pigeons, the rain on the caravan roof - does an Atlassian job of suspending disbelief. It manages to evoke the sense of a living world, from one that could have felt brutally empty.

It is bloody fortunate, then, that walking through the woods looks and sounds so good. Because that's what I spent 90 percent of my time doing.

The minigame, if you like, that you complete to progress through the story, involves placing cameras that will track a squirrel from a known starting point, to an unknown finishing point, or vice versa. The squirrels scurry, leap, jacknife and backtrack, making their routes unpredictable, but they take the same route each night. There are variations, but that's the gist of it.

Because the squirrels move so erratically, however, your subject will inevitably move beyond the sight of your initial cameras after the first night. So you go out, pick your cameras up, work out where you reckon the squirrel might have gone next, and plop them down again in new spots to reflect that. Then it's back to the caravan for the night sesh: watch the footage, find the spot where you lose your target, plan your repositioning. Rinse and repeat. And repeat. Often, I ended up having to go and rearrange my cameras a dozen times in the course of a single mission, and it got dull quickly. There were a few hidden surprises to find along the way, but these were consolation prizes, rather than motivators. Inevitably, my playtime boiled down to an hour of story, padded out with masses of schlep.

This may an irritation specific to me, since I've got a scotch egg where most people have a sense of spatial awareness, and an absolutely heartless intolerance for repetition. I also struggle to feel the mystery-solving itch, so I didn't have that sense of "oh but I've got to get to the bottom of this" that comes naturally to a lot of people.

I'm annoyed with myself, really, because the surveillance mechanic was otherwise a really interesting bit of design, and it was great fun when I got lucky with my cameras. I'd love to see it deployed, for example, in a game that genuinely was just a plain old simulation of nature film-making. Perhaps with dinosaurs. I'd love to play a dinosaur game where you just filmed the big bastards, and there was no sense of threat. If such a thing were to exist, this would be the team I'd choose to make it.

I digress. But then again, I don't. Because as I've tried to emphasise above by repeatedly crediting the individuals involved, this is a game that has a lot of talent stacked up behind it. It's just that for me, it ended up amounting to slightly less than the sum of its parts.