Just six months after the Nvidia GeForce RTX 2060 catapulted straight to the top of our best graphic card rankings, we've now got the RTX 2060 Super. As you may have already seen in my Nvidia RTX Super primer article, Nvidia's new Super cards are sort of like their more traditional Ti variants, but also not. Instead, the best way to think of them (probably) is like supercharged ray tracing machines, giving you a bit more oomph for all that realistic lighting and shadow gubbins they're capable of without necessarily having to resort to Nvidia's upscaling/performance-boosting DLSS tech to make up the shortfall.

Of all the RTX Super cards, the RTX 2060 Super definitely looks like the most enticing upgrade of the lot. Instead of sticking with 6GB of GDDR6 memory like the regular RTX 2060, the Super version now packs 8GB of the stuff, putting it on a level playing field with both the regular RTX 2070 and all the rest of its other Super siblings. It's also got more CUDA cores than the base RTX 2060 (2176 vs 1920), a faster base clock speed (1470MHz vs 1365MHz) and a larger 256-bit memory interface, allowing it to churn through a massive 448GB of data per second (again, just like the RTX 2070 et al) compared to its previous limit of 336GB/s. 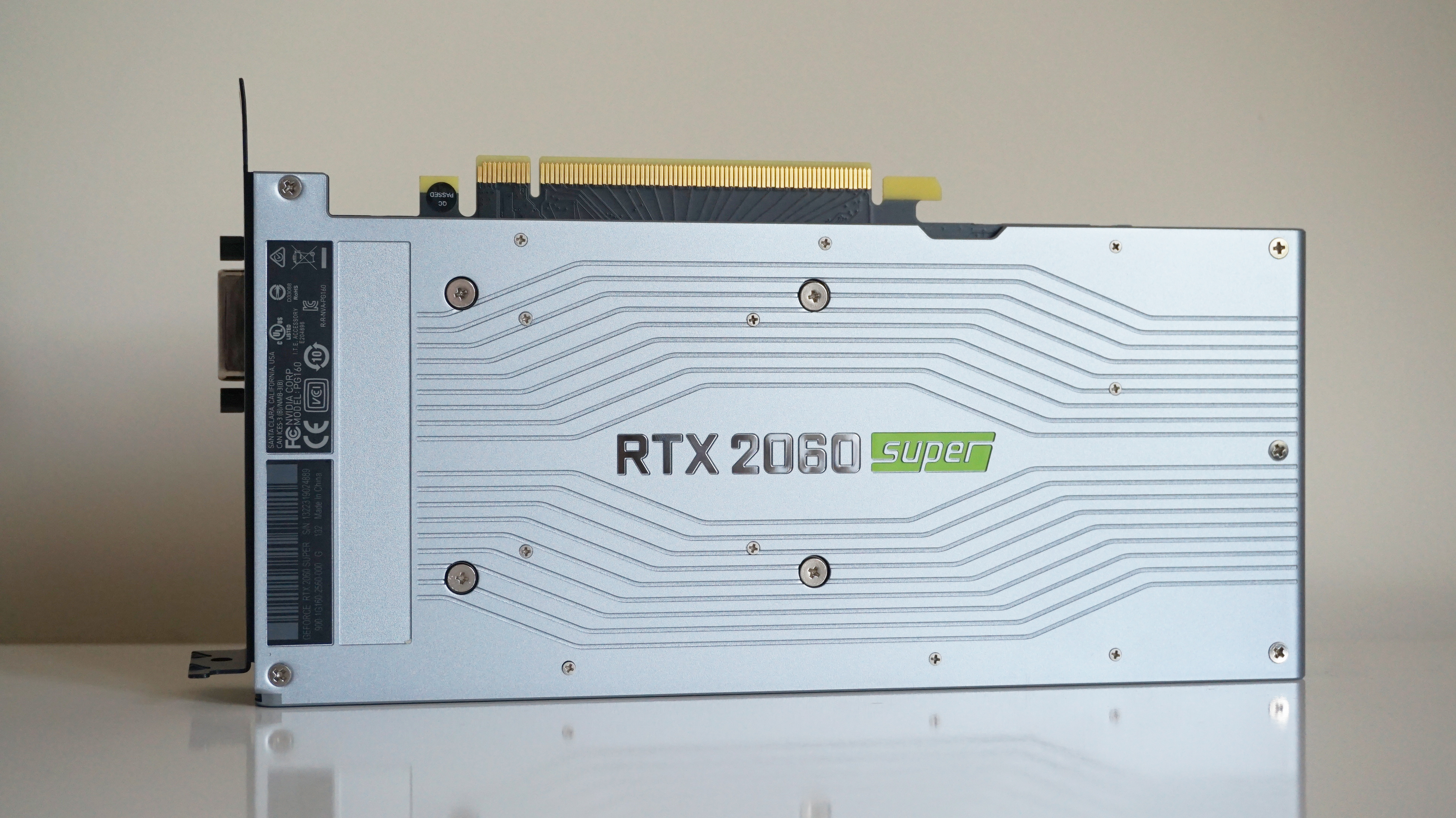 To get that kind of power for just £380 / $400? Now that's compelling, although I should note that AMD's upcoming Radeon RX 5700 Navi GPU is also set to sit somewhere between the RTX 2060 and RTX 2070 for even less at $379. Unfortunately, you'll have to wait until it launches on Sunday July 7th before I can tell you exactly how it compares to Nvidia's new Super card, but needless to say, it's definitely one to watch if what you're about to read below sounds like it might be right up your street.

But enough preamble. Let's talk numbers. Compared to its non-Super sibling, the RTX 2060 Super definitely offers quite the step up across every resolution going. After putting it through my graphics benchmarking suite, I often found it gave me a boost of around 10fps at 1080p, and between 5-10fps at 1440p and 4K. At all three resolutions, that's like being able to bump up the quality settings another notch while still getting the same lovely, smooth performance as you did before.

That's a pretty decent bump on paper, but you're only likely to see or feel the difference if you're playing at 1440p or above. After all, the regular RTX 2060 was already capable of doing pretty much 60fps+ in everything from Shadow of the Tomb Raider to Total War: Three Kingdoms at 1080p, so unless you've got a 1920x1080 monitor with a high refresh rate, you're unlikely to get the benefit of all those extra frames.

Really, though, the RTX 2060 was always intended to be more of a 1440p card than a 1080p machine, so this is what I'm going to focus on most for the rest of this review. And boy howdy does it deliver some nice quality of life improvements. As hinted just a minute ago, the RTX 2060 Super effectively lets you nudge that quality level up a notch at 1440p, giving you even better performance at the upper end of the graphics scale.

In Shadow of the Tomb Raider, for instance, I saw an average of 52fps wandering around the busy square of Cozumel's Day of the Dead festival on Highest with the top SMAAx4 anti-aliasing enabled, which is quite a bit smoother than the average of 46fps I saw on the regular RTX 2060. The RTX 2060 can still hit 60fps on Highest when you drop its AA down to SMAAT x2, all told, averaging 66fps, but the RTX 2060 Super can once again lift that average all the way up to 72fps.

It's also less likely to drop below 30fps when you turn on the Tomb Raider's ray tracing support, too. You'll still only get the best results at 1080p here, but whereas the RTX 2060 only managed an average of 39fps (with lows of 24fps) with on Highest with SMAA x4 and Ultra ray tracing switched on in the game's internal benchmark, the RTX Super bumped that average up to 44fps and only dipped down to 29fps. Yes, it's still not quite the 'Wow! Amazing!' kind of performance boost you might have been hoping for, but I'll be going into more detail about its ray tracing performance in a separate article once I've had a bit more time to look it at more closely.

After all, it's those little bumps that can sometimes make all the difference in tough, intensive games. Take Final Fantasy XV, for example. It's completely unplayable on Highest at 1440p with all of Nvidia's fancy effects enabled on the regular RTX 2060, with frame rates stuck between 26-30fps as I was sauntered up and down the lush hills of Duscae. The RTX 2060 Super, on the other hand, nudged it up to 33-40fps, making it eminently more playable across the board. The same goes for when I only had TurfEffects and HairWorks turned on, too. While still just about playable at the 35fps-odd mark on the RTX 2060, I'd much rather take the average of 46fps offered by the RTX 2060 Super (which, incidentally, is also a fraction nippier than what the RTX 2070 managed on the same settings).

Assassin's Creed Odyssey's Ultra High setting was also much more within reach with the RTX 2060 Super, where it reached an impressive average of 54fps - exactly the same as the RTX 2070. By comparison, the regular RTX 2060 only managed 47fps. It was a similar situation in Total War: Three Kingdoms as well. While the RTX 2060 managed a playable but sometimes choppy average of 44fps with the odd low of 39fps in its battle benchmark on Ultra at 1440p, the RTX 2060 Super bumped that average up to a smoother 50fps with lows of 45fps. The RTX 2070 was still another 5fps ahead here, all told, but again, that's really not bad considering the difference in price.

The RTX 2060 Super tamed The Witcher III's 1440p Ultra settings with ease, too, never dipping below 63fps even in its densest White Orchard forests. Admittedly, that's not quite as nippy as the RTX 2070's low of 71fps, but it's still a little bit more comforting than the RTX 2060's occasional 1440p potholes of 54fps.

The RTX 2060 Super's crowning achievement, however, is finally hitting an average of 61fps in Metro Exodus' super tough Ultra benchmark. Only at 1080p, mind (at 1440p, you're still looking at an average of 49fps on Ultra), but that's still a whole 10fps ahead of the regular RTX 2060 in both cases, and just 5fps-odd behind the RTX 2070. Add in the benchmark's High ray tracing setting as well, and you're looking at pretty much exactly the same kind of gaps across all three cards again, with the RTX 2060 Super managing an average of 46fps on Medium at 1440p compared to the RTX 2060's 36fps average. Much like Tomb Raider, though, I'll be doing a separate ray tracing investigation into all these cards at a later date (especially now I've finally got an RTX 2070 back in for testing after months without one), so watch out for that very soon.

Of course, until I know how AMD's Radeon RX 5700's performance stacks up by way of comparison, it would be foolish to say, 'Oh yes, you should absolutely go out and buy the RTX 2060 Super right now just because it's effectively a much cheaper way to get nigh-on identical speeds to the RTX 2070 for a heck of a lot less money.' I mean, don't get me wrong. It's definitely a mighty tempting bit of kit for £379 / $399, especially if you're after top-notch 1440p performance at all the highest graphics settings. Plus, Nvidia's new RTX Super bundle deal means you also get free copies of Control and Wolfenstein: YoungBlood with it, too, both of which are two more confirmed ray tracing games to help you show off its fancy RTX tech.

The ball, then, is very much in AMD's court, and I'll be interested to see whether it can match up to Nvidia's cheekiest of gazumping tactics. In the mean time, though, we can at least answer two questions: is it better than the RTX 2060? Absolutely. Is it worth spending another £70 / $60 on? Almost certainly if you've been lusting after the RTX 2070 while crying tears of jealousy over a lack of funds in your bank account.

However, it is also worth remembering that the £250 / $280 Nvidia GeForce GTX 1660 Ti is still incredibly good value for money if all you want is something for top-notch 1080p gaming and extremely capable 1440p performance - just have a look at my RTX 2060 vs GTX 1660 Ti comparison piece to see how close it comes at both resolutions. Sure, the GTX 1660 Ti isn't really fit for any of this ray tracing malarkey (see my GTX ray tracing results for more info), but unless you're dead keen on having the best shadows and reflections etc, the GTX 1660 Ti is still a mighty fine GPU for the money.

The RTX 2060 Super does offer a worthy upgrade over the GTX 1660 Ti, but I'd only recommend spending another hundred-odd quid on it if you're absolutely dead set on making the most of its RTX tech. Otherwise, you'll probably be just as happy saving yourself a bit of cash and going with the 1660 Ti instead.