It's only been eight months since Nvidia's GeForce GTX 1660 graphics card first came out, but already it's got a Super-fied successor in the form of the GTX 1660 Super. I've already gone into a pretty detailed breakdown of how both cards compare in my Nvidia GeForce GTX 1660 Super review, but sometimes it's just easier to see things laid out in some nice bar charts, isn't it?

Below, I've put both cards head to head across a variety of games at both 1080p and 1440p to see exactly what they're made of and, most importantly, how much faster Nvidia's Super-charged GTX 1660 is compared to its decidedly not Super (but still very much best graphic card-worthy) sibling. To the bar charts!

Like my usual bar chart comparisons, the aim here is to see how both cards stack up across a variety of resolutions and graphics settings. Since these are both cards at the lower-end of the price spectrum, I haven't included any 4K results in this particular test because, well, these aren't intended as 4K graphics cards. Instead, I've focused on where their main strengths lie: top-end 1080p gaming, and mid-tier 1440p gaming.

To test each card, I paired them with my Intel Core i5-8600K CPU and 16GB of Corsair Vengeance 2133MHz RAM and put them through my general benchmarking suite, taking an average frame rate from either their own built-in benchmarking tools or from my own repeated manual gameplay tests. The games include Assassin's Creed Odyssey, Metro Exodus, Total War: Three Kingdoms, Shadow of the Tomb Raider, The Witcher III, Monster Hunter: World, Forza Horizon 4 and Final Fantasy XV.

For this particular test, I've used Zotac's GeForce GTX 1660 Super Twin Fan and Asus' GeForce GTX 1660 Phoenix cards, as these were the ones sent to me for review. Both cards are at the cheaper end of their respective categories, and I left both of them running at their stock reference speeds. As a result, they should be fairly representative of their respective families, but you may find more expensive cards achieve slightly faster results than what I've detailed below. With all that in mind, let's get to those lovely charts.

Admittedly, neither the GTX 1660 or GTX 1660 Super are really Ultra-grade 1080p cards. They can make a decent fist of it, but as you can see below, you're not going to get 60fps from them at this kind of quality setting (unless, of course, you only play Forza Horizon 4). Still, bar Metro Exodus, which is a pig to run on any kind of lower-end graphics card, you can see that you're still getting a pretty playable average of at least 45fps in most cases, and some even stretch into in the mid-50s. 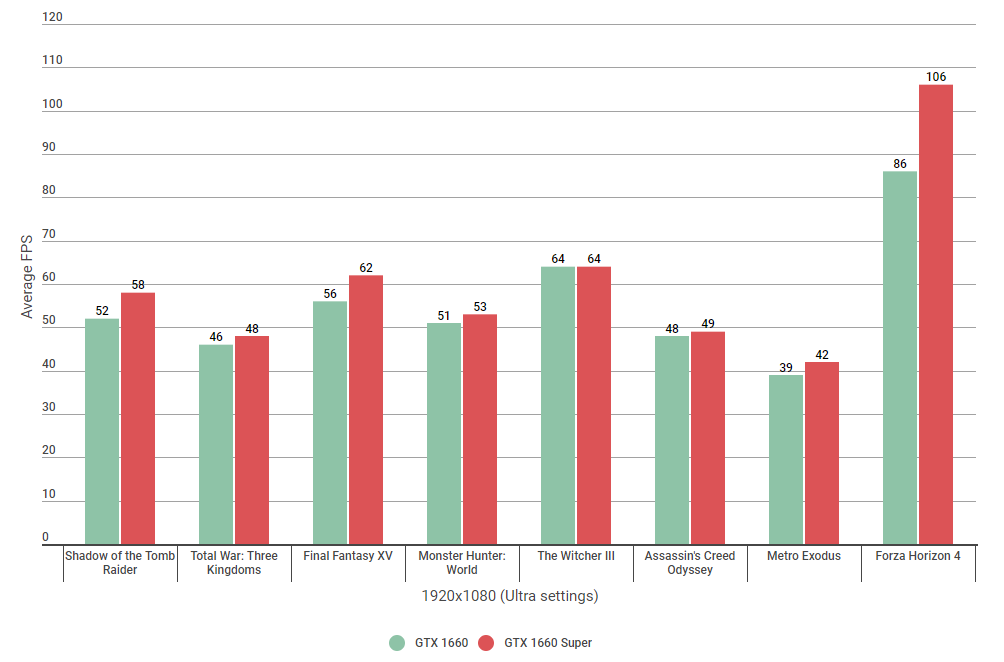 As you can also see, however, the actual amount of improvement you're getting with the GTX 1660 Super here is pretty minimal. Some might be able to tell the difference between 52fps and 58fps in Shadow of the Tomb Raider, or 56fps and 62fps in Final Fantasy XV, but without the aid of a frame rate counter, I wasn't able to tell which one was running smoother simply by sight.

The performance gap starts to open up a bit more when you move down to High quality settings, admittedly, but I'm not convinced you're going to see a tangible difference here, either, in all honesty. You definitely won't if you've only got a standard 60Hz monitor, for example, and again, I'm not sure my eyes are quick enough to see an appreciable difference between, say, 72fps and 81fps in something like Monster Hunter: World. 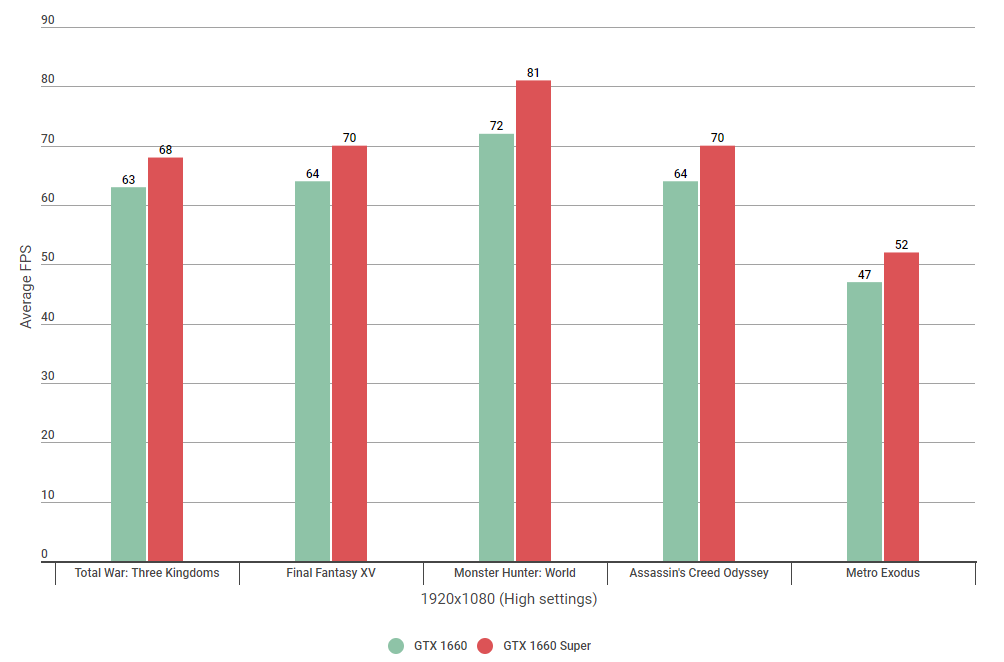 The only game in my benchmarking suite where you might see a potential difference is in Metro Exodus, as it's often around that 40-55fps zone that jumps like the one I've recorded above are felt most keenly. However, that's hardly a good reason to opt for the GTX 1660 Super over the soon-to-be cheaper GTX 1660 (which Nvidia have confirmed is due to be getting a price cut soon to make it a more obvious entry-point into the 1660 family). I mean, yes, you might as well go for the Super while both cards cost the same amount of money, but when that price cut kicks in, I just don't think the Super is really worth the extra expense.

The Super makes a slightly stronger case for itself when you move up to 2560x1440, but once again the benefits you're getting are pretty minimal. As stated above, neither card are really intended for maximum Ultra settings at this resolution, but I thought I'd include them anyway as a point of comparison. 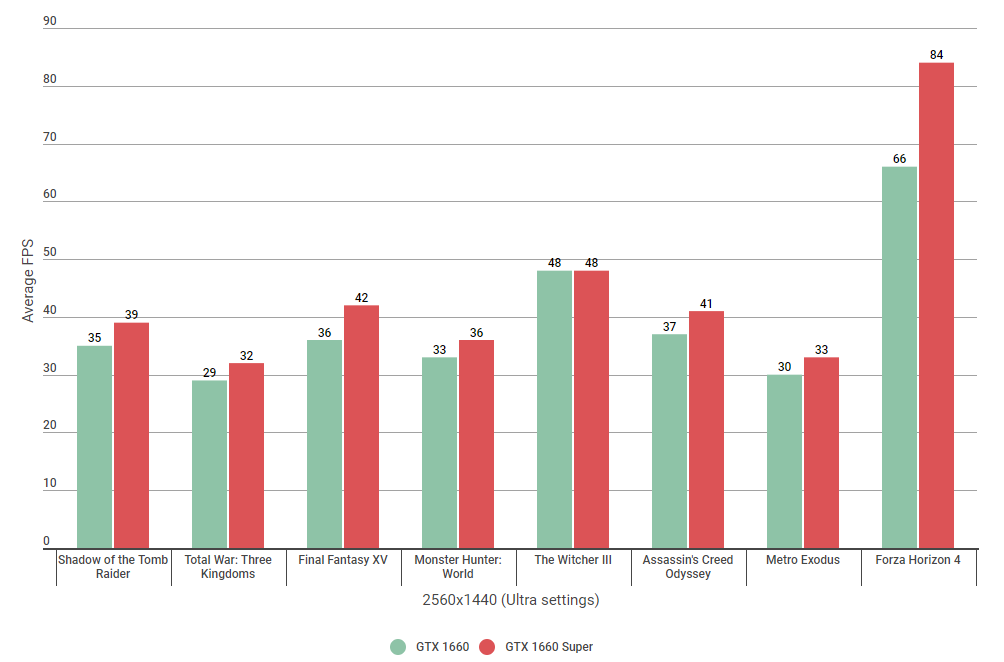 As you can see above, the Super does provide a slightly smoother experience on these particular settings, but in practice they feel just as juddery as each other. Indeed, The Witcher III showed no improvement whatsoever, with both cards producing exactly the same minimum and maximum frame rates during my testing.

It's a very similar picture when you move down to High quality, too. Again, the GTX 1660 and GTX 1660 Super are certainly capable of playing games at this kind of quality setting, but once again the Super fails to make much of an impression. Indeed, the only game where I saw a particularly dramatic improvement was in Shadow of the Tomb Raider, which shot up by a massive average of 10fps. However, even this victory is curtailed by the fact that the regular GTX 1660 can still hit a smooth 57fps, which is more than enough for regular 60Hz monitor owners. You might be able to see the difference if you have a high refresh rate monitor, but for most people the regular GTX 1660 puts in a more capable performance in this respect. 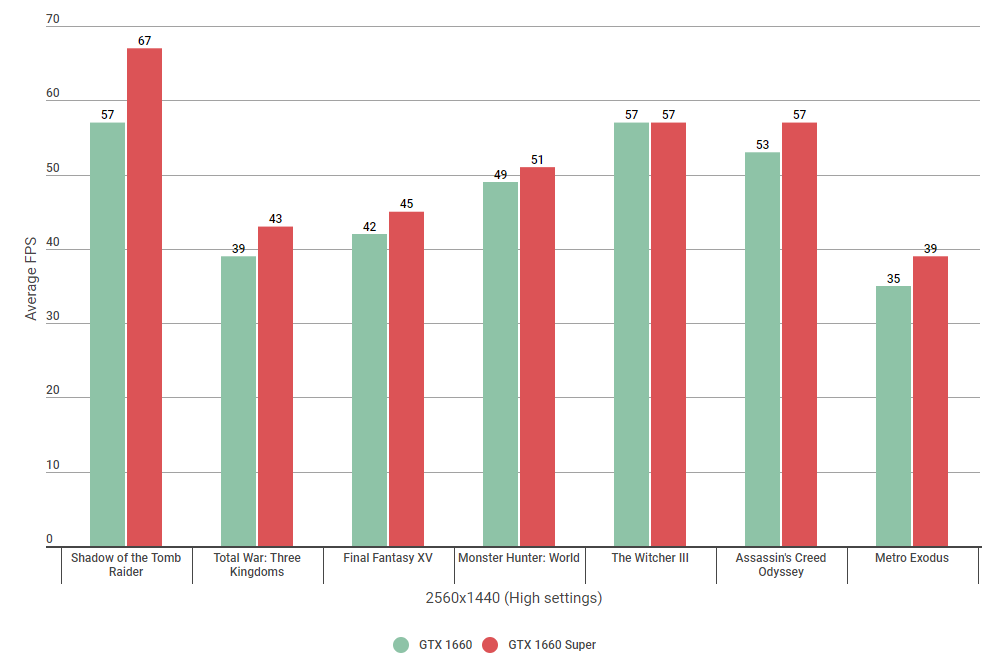 Again, the only game where that extra power might benefit you is in Metro Exodus, as even my tired eyes can tell the difference between 35fps and something closer to 40fps. The same goes for playing on Medium settings as well. Metro showed a tangible improvement from 45fps up to 52fps here (see below), but the jump from 52fps to 58fps in something like Monster Hunter: World wasn't nearly as noticeable. 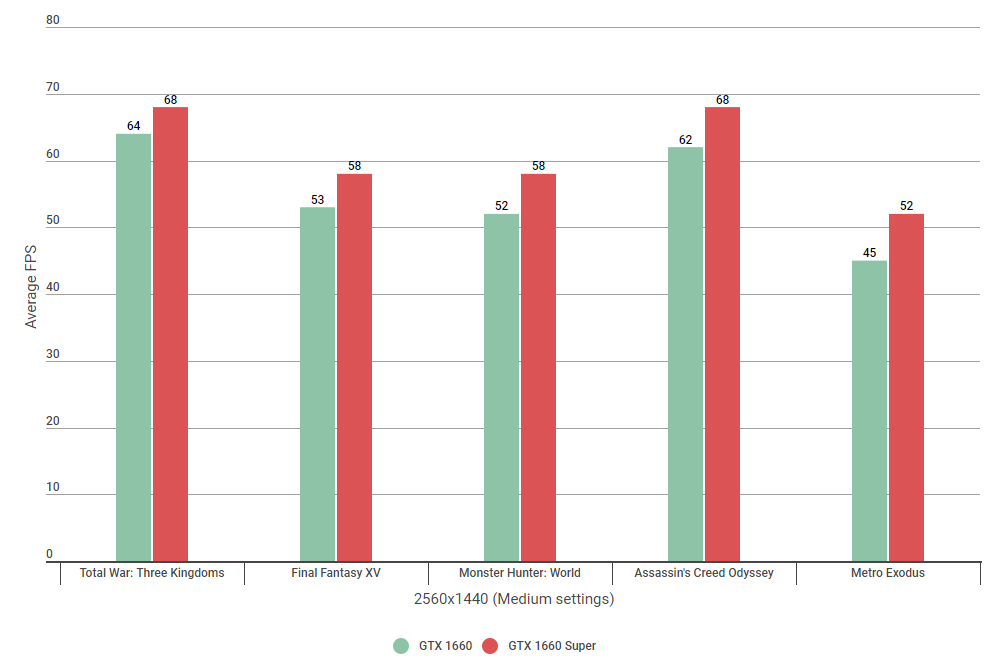 As a result, the GTX 1660 Super has left me rather underwhelmed overall, as it simply doesn't offer a big enough improvement over its non-Super sibling to justify its existence. As I mentioned above, Nvidia's price cut for the GTX 1660 doesn't seem to have taken effect just yet, so if you're absolutely desperate to upgrade your graphics card right now then it would make sense to pick the Super. When it does happen, though, those looking to save themselves some cash will almost certainly be just as happy with the regular GTX 1660 instead.

Overall, then, both cards offer pretty much identical performance across the board. Both excel at playing games on High quality settings at 1080p, and both are best at handling a mix of Medium to High graphics settings at 1440p. The Super may be able to deliver mildly higher average frame rates overall, but the gains you do get from that card simply aren't enough to push you over into the next quality setting up. For that, you're going to need the more expensive GTX 1660 Ti, and you can find out more in my Nvidia GTX 1660 Super vs 1660 Ti article.