Nvidia finally lifted the lid on their new GTX 1660 graphics card yesterday, which is the baby sibling to their also recently-released (and newly-crowned graphics card champ) GTX 1660 Ti. But what difference does that 'Ti' moniker actually make, and is it worth spending the extra £60 / $60 on it? To find out, it's time to look at some tasty graphs.

In terms of overall specs, the big difference between these two cards is the type of memory they come with. While both cards have the same Turing TU116 GPU sitting at the heart of them, the Ti's 6GB of faster GDDR6 memory means it can chew through game data a lot faster than the non-Ti version's 6GB of GDDR5 memory. Indeed, whereas the GTX 1660 has a memory bandwidth of 192GB/s, the Ti's is a whopping 288GB/s.

The GTX 1660 also has fewer CUDA cores than its Ti sibling (1408 vs 1536), which are a bit like the cores you get in your CPU, but for graphics calculations. However, the one area where the GTX 1660 trumps its Ti sibling is its GPU's base and boost clock speeds. Whereas the Ti's GPU has a base speed of 1500MHz and a boost of 1770MHz, the regular GTX 1660 is clocked at 1530MHz and 1785MHz respectively. Or at least they are according to Nvidia's reference specification, which third party manufacturers often tweak and tune to their liking to try and eek out a bit of extra performance from them. As a result, some cards you see on sale may actually be faster these particular figures, but enough about teensy spec differences - let's talk teensy frames per second differences instead!

Paired with my Intel Core i5-8600K CPU and 16GB of Corsair Vengeance 2133MHz RAM, I've seen what each card can do on both High and Ultra settings at each resolution and taken an average frame rate (either from their own built-in benchmarks or from my own repeated manual gameplay tests) to see how they stack up against each other.

To help me, I've got Gigabyte's GeForce GTX 1660 OC and the Asus GeForce GTX 1660 Ti Phoenix editions, which are both at the lower end of their respective price brackets of £200 / $220 and £260 / $280 respectively. This should hopefully give us a good idea about what to expect as a baseline for each card, as well as a clear picture of what that extra £60 / $60 will really get you.

Starting with how each card performs on Ultra settings at 1920x1080, you can see from the graph below that both cards put in a pretty good performance here. Metro Exodus aside, even the GTX 1660 is hitting a smooth 50fps in most cases here, while the GTX 1660 Ti nudges things a bit higher to a comfortable 60fps or above. 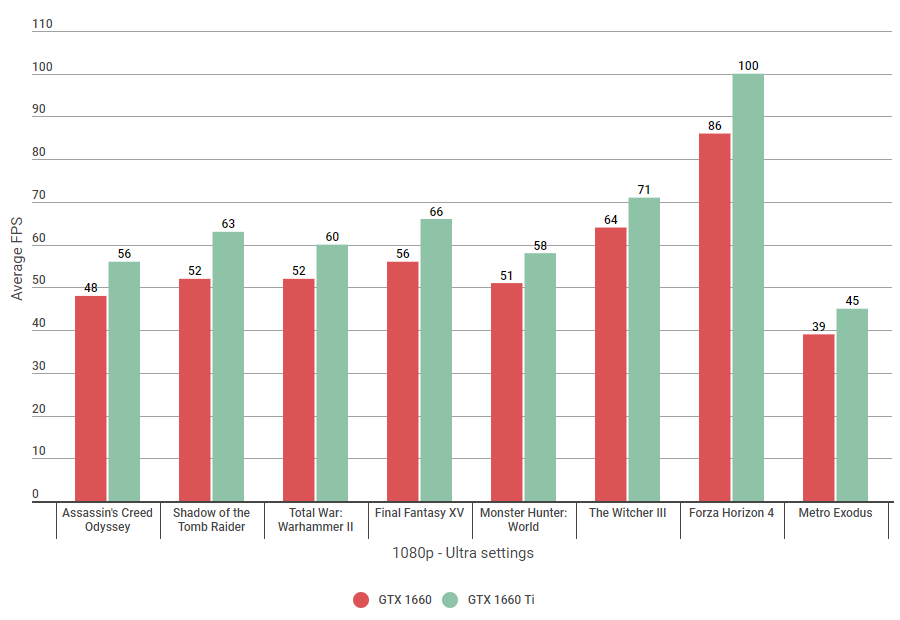 Personally, I'd be pretty happy with the regular version of the GTX 1660 here if I was looking for a card to solely play games at 1920x1080, as I'm not sure you'd actually notice the difference in speed just by looking at them side by side. A lower average does, of course, mean that the GTX 1660 is more prone to dipping into slightly more juddery territory when things get a bit tough - Assassin's Creed Odyssey, for example, had a couple of sub-25fps dips when I ran the GTX 1660 through its internal benchmark, while the GTX 1660 Ti kept its Spartan sandal socks up closer to 30fps. On the whole, though, both were pretty smooth and stable throughout and delivered a perfectly playable experience overall.

Besides, if Ultra ends up being too much for the GTX 1660, you can still get lovely 60fps+ speeds by knocking the quality settings down to High. I've disregarded Forza Horizon 4 and The Witcher III here, as they were already hitting 60fps on Ultra, but that's a pretty nice set of results, if you ask me, as even Metro Exodus was tameable with its full tesselation, AF 16x texture filtering, HairWorks and Advanced PhysX all switched on here (and you can always switch one or more of those off if you want to push it slightly higher). 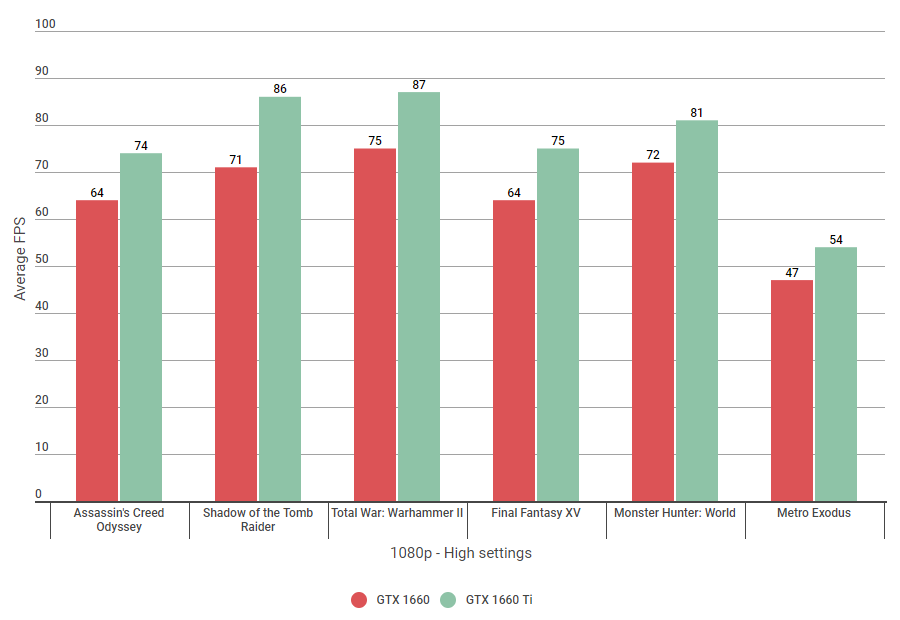 The GTX 1660 Ti, of course, still offers a decent 10-15fps jump over its non-Ti sibling here, but you're only going to actually see if you've got a high refresh rate monitor at your disposal. For everyone else with a regular 60Hz monitor, I reckon the GTX 1660 is more than adequate for the job here, especially when it means you can keep costs down to just £200 / $220 as well, instead of spending closer to £300 / $300 on something that's ultimately only going to get you another quality setting up.

Unless, of course, you've also got a 2560x1440 monitor at your disposal, in which case you might want to consider spending the extra on the GTX 1660 Ti here. Admittedly neither card is particularly comfortable on Ultra settings at this resolution, but a frame rate in the low 40s is almost certainly going to be noticeably smoother than one in the mid 30s here. 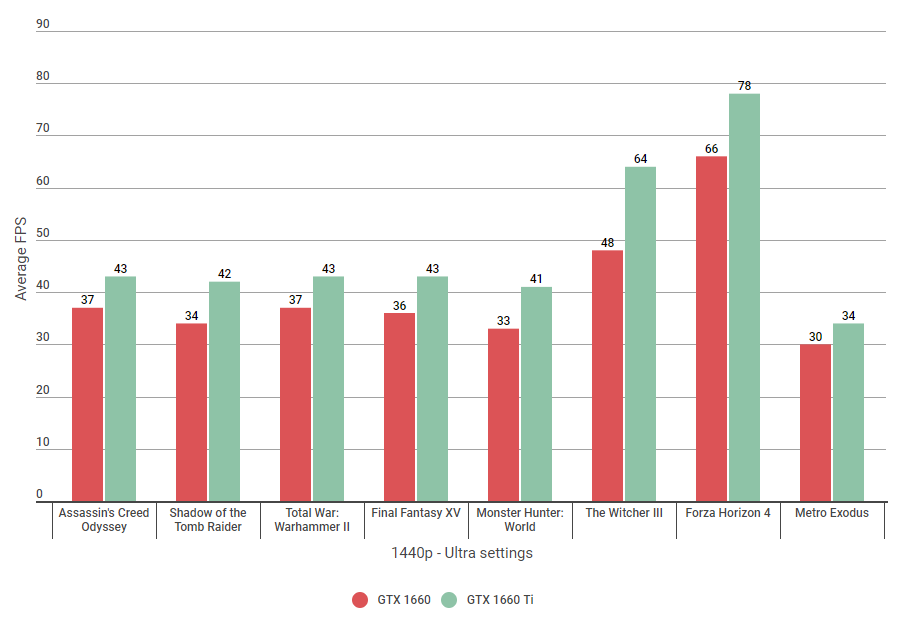 High settings, on the other hand, is much more doable on these cards - particularly in the case of the GTX 1660 Ti, which is able to hit a decent 60fps almost across the board here. The regular GTX 1660, meanwhile, tended to settle more around the 50fps mark, which again is pretty decent considering it costs so much less, but really, you're looking at Medium settings if you want a proper, consistent run of 60fps speeds. 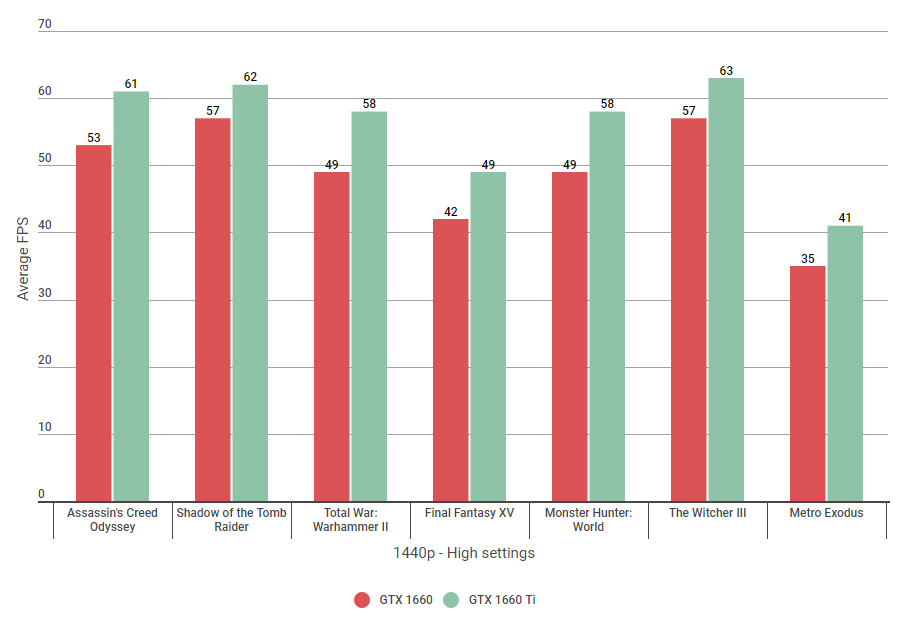 Again, a lot of people will probably be more than happy with that kind of performance in the here and now, but I do worry about the GTX 1660's overall longevity as a 1440p card as games become even more demanding in the years to come. While it can do a pretty good job across Medium to High settings now, in a couple of years time, I wouldn't be surprised if it ended up more of a Low to Medium card instead. The GTX 1660 Ti, on the other hand, is only likely to slip down to Medium to High over long-term use, which I'd argue is probably worth the extra cash in this case.

As a result, I'd probably come down on the side of the GTX 1660 Ti if you're after a card that can do both 1080p and 1440p gaming to a high standard, as it's only going to give you better future-proofing further down the line. For those whose main concern is just at the 1080p end of the spectrum, however, I reckon the regular GTX 1660 should do you just fine.

You could argue it's still worth spending the extra cash on the GTX 1660 Ti if you have a 1920x1080 monitor with a high refresh rate, as its extra horsepower is almost certainly going to make better use of those extra frames than the non-Ti version of the GTX 1660.

That's not to say the regular GTX 1660 can't do super high frame rates, though. In Doom, for example (which I didn't include on the graphs above because everything can already run Doom at stupidly high speeds), I saw highs of 150fps on Ultra settings with the GTX 1660, which is more than enough for your typical 144Hz monitor. As a result, the GTX 1660 should still be a good high refresh rate partner for less demanding games, such as Apex Legends, Fortnite and the like, but you may have to make do with Medium settings if you want the same speeds in today's big, graphics intensive blockbusters.

Either way, the GTX 1660 is a fine graphics card in its own right, and is my new recommendation alongside AMD's Radeon RX 580 for what you should actually buy at 1080p if you're looking to keep costs down as much as possible.