The Nvidia GeForce GTX 1660 is finally a thing that exists, and what a neat thing it is, too. Available from just £200 / $220, it's now pretty much exactly the same price as Nvidia's existing 6GB GTX 1060, which until now has been one of my top recommendations over in my best graphics card list as to what you should actually buy for 1080p gaming if you're looking to keep costs down and don't mind settling for, say, High settings as opposed to Ultra.

But now that both graphics cards can be snapped up for the same amount of money, which one is actually worth buying? Let's find out via the medium of some lovely graphs.

As with every comparison article I do, such as my GTX 1660 Ti vs GTX 1060 and GTX 1660 vs GTX 1660 Ti pieces, I've run each card through my general games benchmarking suite at 1920x1080 and 2560x1440 resolutions to see how they perform across different graphics quality settings. The aim, as always, is see what it takes to get a decent 60fps, and how far each card is able to stretch before things start to become too choppy for comfort.

Paired with my Intel Core i5-8600K CPU and 16GB of Corsair Vengeance 2133MHz RAM, I've seen what each card can do on both High and Ultra settings at each resolution and taken an average frame rate (either from their own built-in benchmarks or from my own repeated manual gameplay tests) to see how they stack up against each other.

To aid us in our quest, I've got Gigabyte's GeForce GTX 1660 OC and the 6GB Asus GeForce GTX 1060 OC 9Gbps edition. The Gigabyte is at the lowest £200 / $220 end of the GTX 1660 price spectrum, which should give us a pretty good baseline of what to expect from this type of card, but the Asus (which I should note isn't actually available any more) used to be one of the nippier 6GB GTX 1060 around. As a result, the GTX 1060 figures are more of a best-case scenario for this card, and are probably about as good as it's going to get compared to the cheapest GTX 1660s out there.

With that in mind, let's graph it on up.

Let's start with how each card fares on Ultra settings at 1920x1080. In a lot of cases, you're actually only looking at a difference of about 5-10fps here, which considering the GTX 1060's age really isn't too shabby for such an old card. There are a couple of more dramatic performance jumps, admittedly, such as Shadow of the Tomb Raider with the full brunt of its SMAA x4 anti-aliasing enabled and Forza Horizon 4, but on the whole both cards are pretty competent here, with the GTX 1060 offering at least 40fps in most cases and the GTX 1660 pushing that up closer to 50fps. 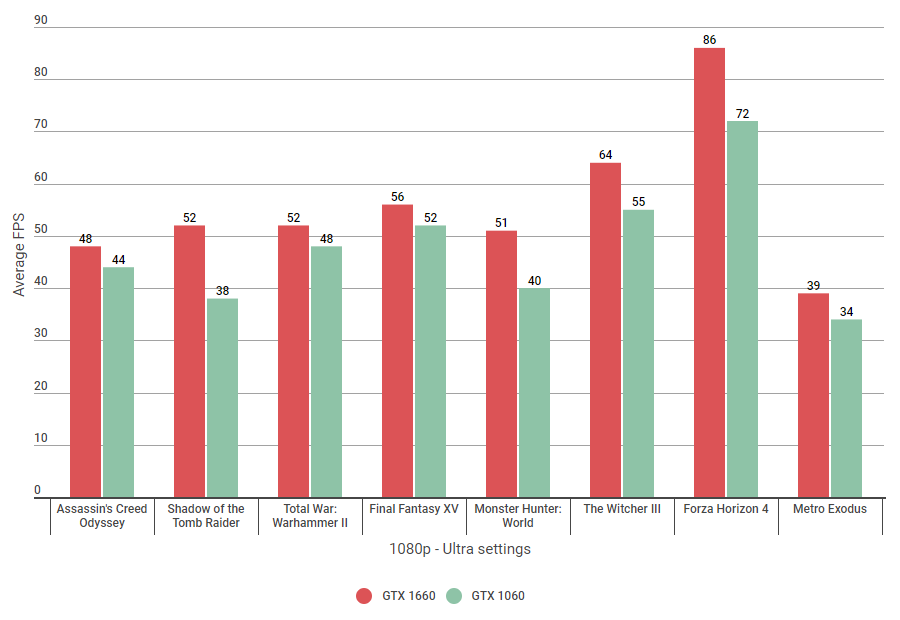 I should note that the GTX 1060 can still get a decent 60fps in Shadow of the Tomb Raider on Highest as long as its regular SMAA anti-aliasing is enabled, but needless to say the GTX 1660 will get you the same kind of speed boost as you see in the graph above on the same settings.

Really, though, both of these cards are most comfortable on High at this resolution, as you can see from the graph below. I haven't included Forza Horizon 4 and The Witcher III here because they were already well into 60fps territory back on Ultra, but the rest of my benchmarking suite are all pushing practically perfect speeds here, save Metro Exodus because that benchmark is one tough cookie to get running smoothly on its built-in High preset, the details of which you can find out more about in my Metro Exodus graphics performance guide. 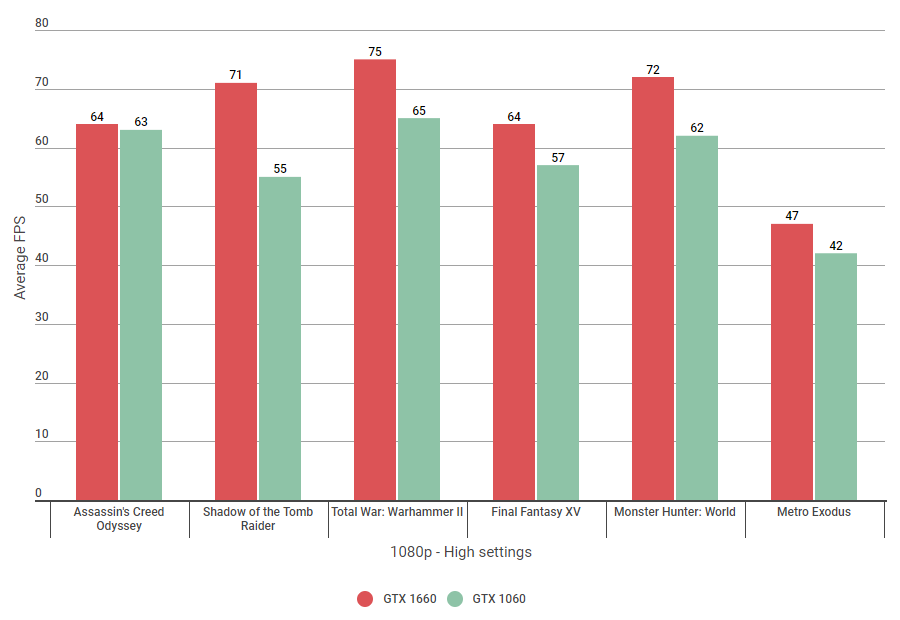 Indeed, there's just a single frame separating my two Assassin's Creed Odyssey scores and only 5fps over in Metro. The GTX 1660 has the clear upper hand in games such as Monster Hunter: World, Shadow of the Tomb Raider and Total War: Warhammer II, but you'll only actually see that extra 10fps or so if you have a high refresh rate monitor at your disposal. Otherwise, you'll just see the maximum 60fps on a regular 60Hz monitor, which is really no different to averages of 55fps or 57fps when you're looking at them side by side.

Indeed, the same thing's true when you look at their 2560x1440 performance. While there's hardly any difference between some games on Ultra settings, such as Total War: Warhammer II and Final Fantasy XV, the gains you get in others such as Assassin's Creed Odyssey and Shadow of the Tomb Raider, for example, are just too big to ignore. 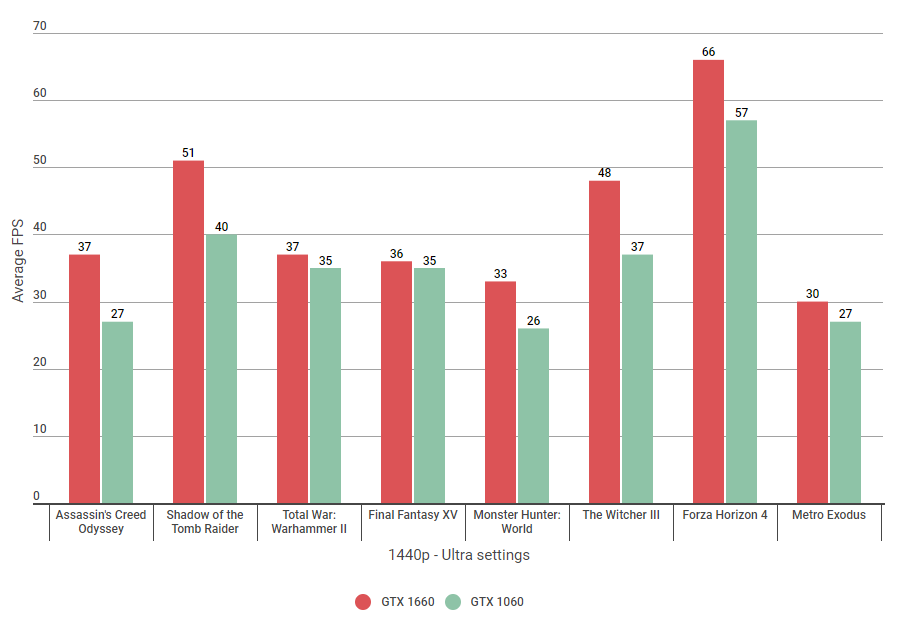 Shadow of the Tomb Raider's result is particularly telling here, too. Unlike the graphs at 1080p, I've only used the regular SMAA x4 anti-aliasing at this resolution, because otherwise the GTX 1060 would slow to a crawl. Similarly, it was only by turning the settings right down to Low that I managed to get anywhere near 60fps with the GTX 1060 at this resolution. The GTX 1660, on the other hand, was hitting highs of 54fps on Highest, and I only had to lower the quality to High to push it into 60fps territory.

Admittedly, a rather strange thing happened when I dropped the quality down to High for everything else in my testing suite, as the GTX 1060 actually performed better than the GTX 1660 in both Final Fantasy XV and Total War: Warhammer II. We're still only talking an average of a couple of frames difference, all told, but I'll admit I was pretty surprised by the result nevertheless. 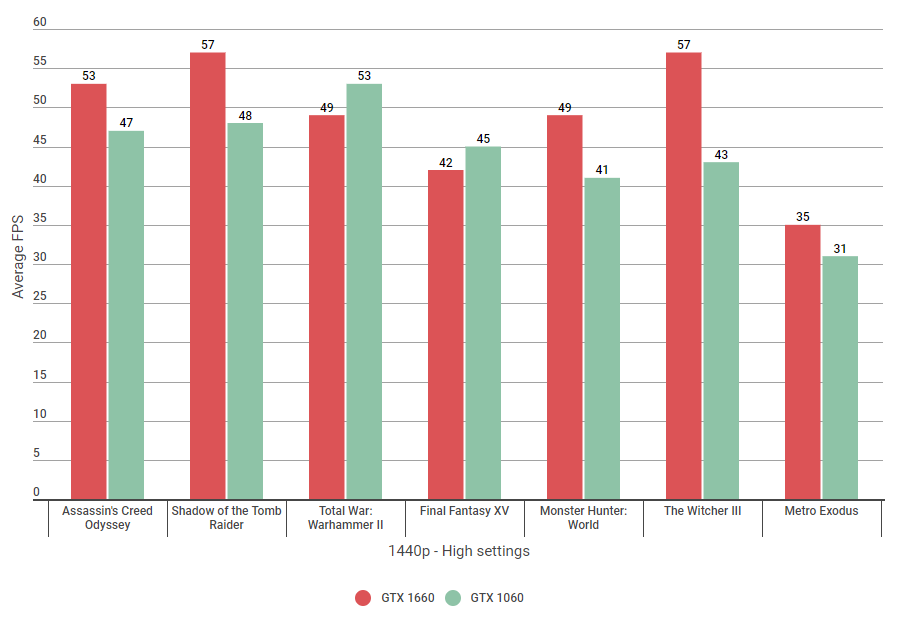 Again, though, this would only be of any significance if the GTX 1660 was a lot more expensive than the GTX 1060, but when both cards can be picked up for the same mount of money, it would be silly to hamper yourself with the otherwise inferior performance of the GTX 1060 just because it can run two games ever so slightly (and pretty much imperceptibly) faster than the GTX 1660.

As a result, I think the GTX 1660 is the clear winner here, despite the sometimes minuscule improvements (or even minor blips) to its overall performance. Not only is it more capable of hitting smoother frame rates on max settings at 1080p, but it's also a lot more comfortable on High settings at 1440p than its 10-series predecessor. Sure, there might be times where they're neck-and-neck, but when the GTX 1660 does pull ahead, it pulls ahead big time.

This verdict may well change if the GTX 1060 suddenly drops in value as a result of the GTX 1660's release, but right now, anyone looking to buy a graphics card for 1080p should definitely have the GTX 1660 at the top of their list over the 6GB GTX 1060.